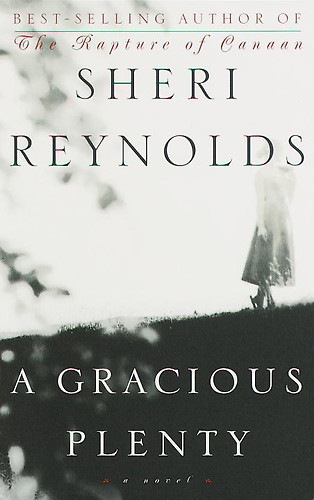 THREE RIVERS PRESS is a registered trademark and the Three Rivers Press colophon is a trademark of Random House Inc.

Thanks to Grandma Mary, Angeline, Aunt Dora, and Uncle James for teaching me about burns.

Thanks to my new editor, Shaye Areheart, who believed in this book, and especially to my agent, Candice Fuhrman, who always did.

A
IN’T YOU GOT NO RESPECT
for the Dead?” I holler. “Get outta here. Ain’t you got no shame?”

But I’m wasting my breath. The children are running before I open my mouth, squealing and hightailing it around tombstones and trees, racing for the edge of the cemetery. A boy without a shirt dusts his belly on the ground and scrapes his back wiggling fast beneath the fence.

“You hateful old witch,” he cries, but not until he’s in the shrubbery on the other side. “You damn-fool witch.”

I raise my stick and shake it at him.

By the time I get to the plot where they were playing, all that’s left is a striped tank top and a bottle half-full of soda that they were throwing like a ball. They’ve cracked the plastic, and the liquid drizzles out dark. Fizz runs down my arm as I pick it up.

I apologize to Sarah Andrews Barfield, 1897–1949, and wipe the soda off her dingy stone with that child’s shirt. It doesn’t look like rain. Ants will come.

I stuff the shirt through the hole in the fence and then find a brick and a few fallen limbs to block off the space until I can get it patched.

On the way back to the house, I stop to visit with Ma and Papa for a spell. Overhead, the wind creaks oak, and beneath me, thick grass bends. Tomorrow I will bring out the lawn mower, but today I catch a nap between them, the way I did when I was small, when their hands were warm and could touch me back.

I
HAVE BEEN OLD
all my life, my face like a piece of wood left out in snow and wind.

I was four when it happened. Papa had gone to get the grave diggers and bring them home to eat. He did that sometimes when it was hot and they were busy. Ma didn’t mind cooking for a crowd.

But she had that day’s meal fixed and waiting. She was already cutting apples for the next day’s pie, and I was riding the broom in circles around the table.

So I plopped down on the floor with the broom pony, ran my hand over the bristles, and pretended to rub his mane. Then I decided to get the pony some water. I needed a bowl. Ma had a bowl, but it was full of apples.

“I need a bowl to put some water in. My pony’s thirsty.”

“Give him some apple peels instead,” Ma said. “He’ll like that even better.” She was good at playing along.

I was sitting beside the brown paper bag where Ma was dropping the peels. I reached in, grabbed a curled strand of red, and fed it to the pony. Then I looked up and saw the handle of a pot on the stove.

“Lord, Lizzie,” Papa whispered later, “ain’t right for this child to be widowed by her own skin.”

Ma shivered off oxygen soap, hard and brown, mixed it with honey and flour, and tried to paste my skin back on. She broke aloe fingers and doused my face, my shoulder and arm. She whispered, “I
told
her to stay away from that stove,” her voice choking out. She brushed my hair away from the places where skin bubbled up.

They thought I was asleep, but I wasn’t. I was dazed and drunk on honey water, lost in the buzzing of the burn. I thought they were washing my hair, but it was just blisters breaking and Ma crying, and water spilling from the cup they held to my mouth. I thought I might wash away.

They took me to the clinic for a day and a night, where my veins drank sugar water as nurses watched on.

At the time, it seemed like all my howls got lodged in my throat. I thought I was too stunned to make a sound. But Papa said I howled plenty, said I howled at the hospital and howled when I came back home.

Ma washed the shirt that Papa had cut away with his pocketknife. She kept it in the drawer, where it got buried by report cards and pictures. Discolored and tiny, it still smelled of grease when I threw it out. There’s a stain in the bottom of the drawer where that shirt rested for thirty-odd years.

Not long after it happened, the grave diggers helped Papa screen in the porch because gnats kept landing on my body and drowning in my watery skin. Papa joked that he didn’t want to claim ordinary bugs as family, and I had no choice but to sit outside. It was hot in the house, and I needed all the breeze I could get.

A man from the funeral home brought me a swing and hung it on the porch beam. He was a friend of Papa’s, and Papa never forgot his kindness. Years later when his big heart broke open, Papa gave him the plot he’d been saving for himself. His daughter still brings flowers, and I straighten them after storms.

For a while following the scalding, people brought salves and remedies, sacred lards from beloved pigs. With baking soda and water, they made me masks and casts that stung the air out of my lungs. They baptized me in vinegars. They patted my thighs and said, “God bless.”

For a while, parents slapped their children when they pointed. For a while, teachers punished the ones who called me “Granny Finch.” But later, they all gave up. They all turned away. The ones without scars, they kept their secrets, hid their losses, lied in ways that only the living world does.

But you cannot hide the scars from a burn. Not with mud, the way I tried to when I was young, playing by the riverbank and smoothing clay into the dents on my shoulder and chest, filling it even until it dried white and broke. Sometimes I’d clay my face, splashing it wet to keep it smooth. In the water, I could almost see what I’d look like normal—my big dark hair curling wild and mushroomed around my head, my dark eyes, my face clay-smooth and drying white, then cracking into an old woman and washing off to leave me the same.

You can’t hide burn scars, and there’s no point in trying. I live in a world without secrets. That’s why the children throw rocks. That’s why the cordial adults smile and go back for one more stick of butter, one more box of Brillo pads when I enter the checkout line at the grocery. They never hold my gaze or stand too close.

I still live in the same house. At sundown, I lock the cemetery gate, honeysuckle and ivy growing around cast-iron posts. I cook myself supper, a piece of meat, something from the garden. I sit on the porch in the evenings, listening to the crickets, to the howling alley mutts. Sometimes the phone rings. Usually it doesn’t. Sometimes I turn on the radio, but more often I hum. And when I’m tired, I sleep.

At sunup, I feed the animals, make coffee, read the paper. At seven, I open the gates. I speak with the funeral homes if there’s a burial scheduled, nod to the workers coming in on bulldozers, and I’m civil with all the preachers who pass through. But mostly I trim hedges, straighten arrangements, pick up trash, and cut the grass. From time to time, I find new homes for spiders who’ve built webs in the armpits of crosses overlooking timid souls.

I tend this land. This land and the things that grow here are the only family I have left. With my scarred face and scarred neck and one scarred arm, I stake plots with wood and string, a room for you, a room for you. I bury the ones who died noisy in quiet, the ones who died lonely in family plots. The ones who died young, I cradle in boxwoods. Foes kiss here. Fears decompose. And in death, all the wounds begin to heal from the inside out.

I
T’S A HOT
day, mid-June, and I’m waiting for the sun to go down. I’m sweating from every pore and smelling ripe, smelling like sharp apples and mud, and waiting for an evening rain that probably won’t come, and won’t last long enough if it does.

I make my rounds at the cemetery, walking the perimeter, checking to make sure that all the cars are out, and I end up at the gate. Just in time.

“You gotta quit doing that, Finch,” Leonard calls, kicking up dust as he walks toward me. He’s pulled his blue squad car next to the cemetery gate, but I’m on the inside, locking up. I’m the one putting
him
behind bars.

“Doing what?” I ask him. “Have I done something to you?” Me and Leonard go way back. We went to school together, but we were never friends.

Leonard just shakes his head and takes a step closer. He’s too fat for his policeman shirt, his belly leaning over his belt. His eyes are weak, blue, and afraid of mine. He scuffs his hard black shoes in the gravel, planting himself.

“I just talked to the preacher. He said Lois Armour had called him up crying. Said you’d paid her another visit.”

“That ain’t right, exactly,” I explain. “I saw Lois on the street when I was walking to the mailbox.”

“Well, okay. Then you saw her on the street. But, Finch, you gonna have to quit scaring people. You know as good as I do that her dead girl ain’t sending messages from the grave. How come you want to addle that woman’s head? Don’t you reckon she’s got troubles enough?”

“I got nothing to say to you,” I tell him, and turn away, walking easy. The air feels damp, and I think we might get that shower after all.

Dream Huntress (A Dreamseeker novel) (Entangled Ignite) by Michelle Sharp
The Baby Verdict by Cathy Williams
Goody Two Shoes by Cooper, Laura
Carry Me Down by M. J. Hyland
The Spurs of Iron Eyes (Iron Eyes Western #3) by Rory Black
Are You Experienced? by Jordan Sonnenblick
Isle of Enchantment by Precious McKenzie, Becka Moore
Lady of the Shades by Shan, Darren
The Last Banquet (Bell Mountain) by Lee Duigon
7 Days and 7 Nights by Wendy Wax