Read A Heart to Rescue Online

A Heart to Rescue 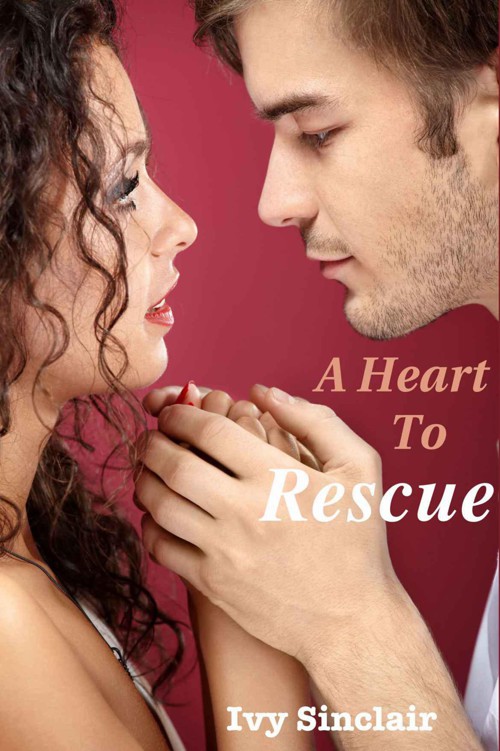 A Heart to Rescue

This ebook is licensed for your personal enjoyment only. This ebook may not be re-sold or given away to other people. If you would like to share this book with another person, please purchase an additional copy for each recipient. If you’re reading this book and did not purchase it, or it was not purchased for your use only, then please return to
Amazon
.com and purchase your own copy. Thank you for respecting the hard work of this author.

His eyes were blue. That
kind of stormy blue that
could blaze a
trail right into your soul
and there would be nothing you could do about it
. Mel realized that she had been caught staring as
that sentiment crossed
her mind. She immediately dropped her eyes
from his
and made her arm continue its swirling motion wiping off the tabletop of the booth in front of her.

It was a Monday afternoon, the wor
st possible shift to work at the Rumbling Roc
k Bar and Grill. Mel hated Mondays. The hours stretched into an endless ocean
,
and she frequently
felt
as if
she was bobbing along in a boat with no engine
. But she was the newest waitress on staff
,
and until she built up her tenure, she was stuck with the shifts that nobody else wanted.
When she arrived for her shift thirty minutes ago though, the
man sitting at
the bar had drawn her attention. T
he normally abysmal shift suddenly
felt
much more palatable with that kind of scenery
.

Mel cut a glance back across the room, but the man's gaze had returned to the highball glass in front of him. Occasionally he would pick it up, swirl it around a few times, and then return it to the bar without pulling it to his lips.
Even if he wasn’t devastatingly gorgeous, h
e
was the only patron at the bar, so it was hard
not
to look at him
.
His
long legs planted firmly on the floor
in front of the stool
told her that he was taller than averag
e, and his trim waist paired with
a set of broad s
houlders
told her that he
regularly
saw the inside of the gym. His hair was so black that it shone even under the meager light of the hanging bar lights above his head. There was a five o'clock shadow across his cheeks, b
ut that was the only part of his appearance
that look
ed the slightest bit casual. The
dark blue pin-stripe suit
he wore
ensured that he looked
utterly
o
ut of place at the Rumbling Rock,
but the man didn't seem to care.

She wondered what
could have possibly
drawn the man to her dive bar on the edge of
Spring City
. There was nothing p
retentious or glamorous about the bar
. It was far from the trendy bars and restaurants downtown that catered to the people who cared about such things. Mel knew
about
that better than most. One day, not all that long ago, she had been one of those people. T
hat had been before her life fell apart. That had been the
life that she left behind without a second glance over six months ago.

Perhaps that was what fascinated her about this man. He was a real-life, slightly painful reminder of what she had given up, and seeing him there dredged up memories of things that were better left in the past. She was alternately intrigued and annoyed with him. Of course, he sat there, nursing his drink, completely oblivious to the rush of emotions
his presence
evoked inside of her.

Now that she knew what color his eyes were
though
, she thought that she coul
d forget that he was there. Mel’s responsibility was
the tables in
the
dining area while
the bartender,
Max,
kept an eye
anyone who sat at the
bar. It was just the two of them on Monday afternoons, and Mel was pretty certain that Max would have preferred to be anywhere else than stuck
with her inside the dingy bar
.
The feeling was mutual.

The creak of the heavy, wooden front door brought the welcome distraction she had been waiting for: customers. She was
frustrated
to see that they weren't just any customers though; Barry and Bud Parker were regulars and the sight of them
made her stomach clench uncomfortably
. Barry and Bud were twins
but coul
dn't have looked more different in appearance.
Barry was tall and thin, his plain boyish face belying the fact that he must be at least forty
years old. Bud was short
and carried a wide girth around
his belt line. His face was tight and seemed dressed in a permanent scowl.

What they had in common was that they were
rude, egotistical, and lousy tippers.

Mel said a silent prayer hoping t
hey'd make their way to the bar and
then Max could deal with them
,
but
the two men sidled right past it
. The brothers were talking
animatedly
about some
“
jackass
”
at a job site, but that didn't stop Bud from giving her a lewd wink as he shoved his stout body into one side of a booth
on the far side of the dining room
.

Her feet dragged as she approached the table. Barry stopped talking as his eyes lit on her face. "Well, hello there Mel! A
ren't you a sight for sore eyes?”
Barry never had a better pick-up line than stupid
clichés
. Mel thought that he was
generally
harmless outside of his lame verbal attempts to attract her attention,
but she
wasn’t willing to bet on that assumption
.

"Barry, Bud," she said in a crisp greeting as she pulled out her order pad. "Usual?" She wanted to get away from them as quickly as possible.

Mel groaned inside. If the brothers were starting to drink already, that meant they'd be there all afternoon. When Bud got drunk, his hands started to wander, and Mel didn't think that she'd be able to stop herself from decking him if he "accidentally" grabbed her ass one more time. She gave serious consideration to telling Max that she felt sick and needed to go home.

"Comin' right up," she said
instead
as she turned on her heel.

The conversation resumed behind her. She took her time making her way to the bar,
straightening
salt and pepper shakers and napkin bin
s
on several on the
tables. All too soon she reached
the
waitress station at the
end of the bar
next to
the
door that led into the kitchen
. She intended to busy herself with as many small, invisible tasks as possible
for the next few hours
that kept her out of reach of Bud Parker.

"A pitcher of Light," she said to Max, who leaned nonchalantly against the bar
re
ading a car magazine.
The biggest difference that she could see between her and Max
w
as that Max would do everything he could
not to
do a lick of work
during his shift.
She preferred to be busy. It helped keep her thoughts from wandering into unwanted places.

Max grunted in re
ply and moved to the beer tap
. As Mel started to enter the order into the POS system, she saw that the blue-eyed man, who
sat
at the opposite end of the bar, now appeared to be studying her. Mel tried to
pretend
she didn't notice.
She was used
to men checking her out,
but then her mind
b
lanked on the entry code for a
pitcher of beer. She stood there, feeling the weight of the man's stare, before
deciding to
give into a bit of spontaneity
. She
turn
ed
and
m
et his eyes full-on. Although her life had been turned upside down, she was still the same person, and old Mel wouldn't
shrink
under an attractive man's gaze. The old Mel would have eaten him for dinner.

She had to give him credit. Caught staring, he didn't even flinch the way that she had done
when he caught her
earlier. If anything, she sensed a kind of curiosity there. Mel decided to try an experiment. She raised her hand, pulled her lips into a seductive grin, and fluttered her fingers at him. The
man's eyebrows shot up and he frowned
before dropping
his eyes. Mel was left feeling embarrassed and slightly mortified.

"Here," Max's looming form blocked her line of sight to the man at the end of the bar as he set a pitcher of fo
amy beer in front of her. "You tell those two that if they get
loud, I'm kicking them out."

"Sure, sure," Mel said, rolling her eyes. "You always say that.
Thing is, you never actually do it.
"

Mel
took the pitcher and sighed as she p
ut in on a tray with two beer mugs
. Max talked a big game, but he wasn't a fighter regardless of his
hulking
form. Plus that
kind of thing
would require him to
do something above and beyond
his normal duties
, and Max put in nothing but the minimal effort.

Mel took her time wal
king back to the booth, and set the tray down on the edge. She quickly slid
the pitcher and glasses off of it. She knew that Bud was staring at her cleavage.
The required uniform at the Rumbling Rock was a tight, nearly transparent low cut t-shirt.
She straig
htened and took a step back. That
extra few inches ensured she was out of Bud's reach, which made her glad as she saw the gleam of lust in his eyes. He hadn't taken them off of her chest. He slowly licked his lips
,
and Mel felt like a wave of disgust.

"Anything else?"
she said.

"Just keep 'em comin'," Bud said. "Like I said, we're celebrating. You should grab a glass and join us, Mel.
My treat.
"

Bud looked around the empty room. "Looks
to me
like you have some
free
time
to fit us in
."

Mel
ignored his comment
and walked away. She had no desire to be drawn into further discussion with either Parker brother. That was when she saw that the
blue-eyed
man
at the bar
watching her again.
Mel stormed into the back room to get a broom, u
nwilling t
o embarrass herself any further
. The
floor that she swept twenty minutes ago
no doubt needed to be swept again.