Read A House in Fez: Building a Life in the Ancient Heart of Morocco Online

A House in Fez: Building a Life in the Ancient Heart of Morocco 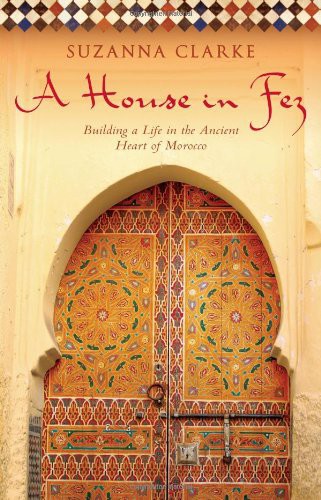 BUILDING A NEW LIFE IN MOROCCO

When Suzanna Clarke and her husband bought a dilapidated house in the Moroccan town of Fez, their friends thought they were mad. Located in a maze of donkey-trod alleyways, the riad was beautiful but in desperate need of repair. But they were determined to restore the house to its original splendour, using traditional craftsmen and handmade materials.

Beautifully descriptive and with an extraordinary sense of place,
A House in Fez
is a journey into Moroccan culture. Into its day-to-day rhythms, customs and festivals; its history, Islam and Sufi rituals. And above all, into the lives of its people – warm, friendly and hospitable.

Born in New Zealand, Suzanna Clarke grew up in several parts of Australia. In her twenties she lived in a Welsh commune, an Amsterdam squat and a Buddhist monastery in Nepal. Apart from forays into contemporary dance and academia, she has worked as a photo-journalist for more than two decades, contributing to Australian and international newspapers, magazines and books and holding several exhibitions. She is currently the arts editor of a major Australian newspaper.

For Meg and Henry, my parents, who began the adventure.
And for Sandy, my love, who shares it still
.

MAYBE IT WAS
a fit of madness, but on just our second visit to the old Moroccan capital of Fez, my husband and I decided to buy a house there – as one does in a foreign country where you can’t speak the language and have virtually nothing in common with the locals.

Morocco is only thirteen kilometres across the Strait of Gibraltar from Europe, but in almost every respect it might as well be on another planet. Situated in the north-west corner of Africa but separated from the rest of the continent by the vast Sahara, its Arabic name, al-Maghreb al-Aqsa, means ‘the extreme west’. It is a land of cultural and ethnic amalgams, of Berber, African, Arab and, in more recent times, French and Spanish influences. The writer Paul Bowles called Morocco a place where travellers ‘expect mystery, and they find it’. He wasn’t wrong.

Our first visit, in 2002, had not been auspicious. I developed
a
raging case of the Moroccan quick-step after eating in a fancy palace restaurant, and like many tourists, we’d been fleeced in a carpet shop by a charming but wily salesman whose money-extracting technique had been handed down through centuries of dealing with naïve foreigners.

Nevertheless Sandy and I responded to Morocco in a way we had to no other country. We found it as multi-layered and intriguing as the patterns in the tile work adorning the buildings, each of which has its own hidden meaning. Morocco has the mystique of a land from the Old Testament yet appears to be coping comfortably with modernisation. Internet cafés rub shoulders with artisans’ workshops; peasants on donkeys trot beneath billboards advertising the latest mobile phones. Outside mosques, running shoes are lined up next to pointy-toed babouches. In the souks, women wearing long robes and headscarves escort daughters with beautifully cut hair and high heels. You can eat at a street stall, in a Parisian-style café, or next to a tinkling fountain in an ornate courtyard. You can find yourself in the midst of a crazy, honking traffic jam, or dodging donkeys in cobbled alleyways, or riding a camel in the solitude of the Sahara.

Fez, in particular, won our hearts. Its location in a bowl-shaped valley protects it from the baking heat of summer and the bone-chilling winds that race down from the Atlas Mountains in winter. The ancient Medina, or walled city, is the cultural and spiritual core of Morocco and is at once a delight and a challenge, an assault on the senses. Its countless narrow alleyways are not a museum but a living community, abuzz with Fassis going about
their
business. The largest car-free urban area in the world, the Medina is home to quarter of a million people, but very few of them are expats. And unlike in Marrakesh or Tangier, tourists are more of a sideline than the main event.

Within the Medina’s thick sandstone walls lie thousands of flat-topped houses. Viewed from a distance, they are impenetrably dense and complex, like a nest built by cubist termites – a room over a neighbour’s stairs here, another room stretching over next-door’s kitchen. The houses offer blind faces to the street; the only clue to what lies within are their intriguing doorways, decorated with intricately carved wood or with hinges showing the hand of Fatima, the Prophet’s daughter, whose influence is believed to ward off the evil eye.

As is the case everywhere in the Medina, the dwellings of the rich sit next door to those of the poor, although all appear similarly drab from without. In Islamic philosophy, God and family are more important than showing your wealth to the outside world. Scattered among the houses are green-tiled minarets, from where five times a day a melodic voice echoes across the rooftops. Then another joins in, and another and another, until the whole city reverberates with the muezzins’ calls to prayer.

There were aspects of Morocco we found confronting – the beggars, child labour, animals being treated as simply tools or pests. But the negative factors were part of a complex society, and were off set by the warmth of the people, the cultural and historical richness. It was a country where we both felt more alive than anywhere else, our every sense engaged.

Back at home in Brisbane after that first trip, our far too expensive Berber carpet – the colour of sunset on the sands of the Sahara – lay on the floor of our living room, reminding us of the sensual beauty of Morocco, and of our ignorance of the traps of that enormously different and distant culture. We found it hard to settle down. The advertising that bombarded us daily seemed more intense, the supermarkets soulless. Most of the food sold there was so far from its origins as to be unrecognisable, obscured by packaging designed to conceal the contents. Even the fruit and vegetables were plastic-wrapped, some of them coming from halfway around the world for me to buy, wilted, at many times the original price. And we in the ‘developed’ world were under the illusion that we had the best of everything.

Where were the lively, crowded markets that echoed the way humans had traded for centuries? Where was the produce piled high in the open, direct from the farm, allowed to ripen on the vine or on the tree or in the earth, and only available in season? In Moroccan markets you could smell, handle and often taste things before buying. You looked the farmer or the stallholder in the eye as you quibbled in a good-natured way about the quality and price.

On days when the walls seemed to be closing in, I would trawl the Internet, looking at sites on Morocco. Among them were a number offering real estate for sale, and slowly an idea started to form. Why not buy a house there? Living in Morocco for part of the year would enable us to explore its radically different reality in a much more profound way than just visiting. The
notion
seemed fantastical, but it grabbed my imagination and began to dominate my daydreams. I had a romantic vision of ancient walls touched by golden light, within which generations of lives had been lived. A house waiting for us to save it, to bring it back to what it once was – but perhaps with a better bathroom.

One of the reasons Sandy and I get on so well is that he never stops me from pursuing mad schemes; in fact he frequently gets more caught up in them than I do, usually about the time I’m getting cold feet. In the decade we’ve been together, his enthusiasm has got many of our projects over the line, and so it was in this case. Watching me become frustrated with high-priced houses in tourist enclaves, he said, ‘Why don’t you look for a house in Fez?’