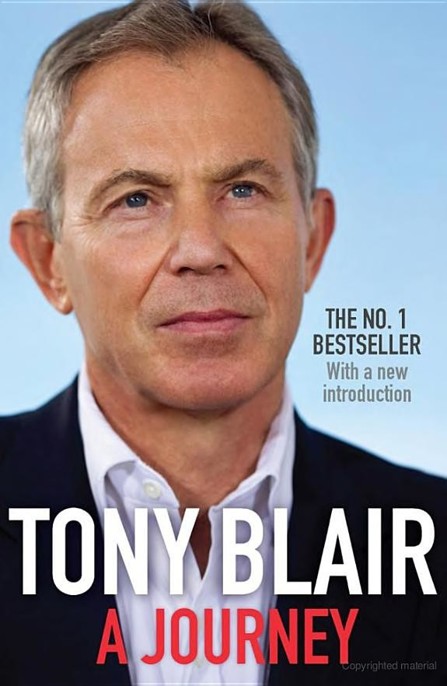 TONY BLAIR is the politician who defines our times. His emergence as Labour leader in 1994 marked a seismic shift in British politics. Within a few short years, he had transformed his party and rallied the country behind him, becoming prime minister in 1997 with the biggest victory in Labour’s history, and bringing to an end eighteen years of Conservative government. He took Labour to a historic three terms in office, as the dominant political figure of the last two decades.

A JOURNEY is Tony Blair’s first-hand account of his years in office and beyond. Here he describes for the first time his role in shaping our recent history, from the aftermath of Princess Diana’s death to the war on terror. He reveals the leadership decisions that were necessary to reinvent his party, the relationships with colleagues such as Gordon Brown and Peter Mandelson, the gruelling negotiations for peace in Northern Ireland, the battles over education and health, the implementation of the biggest reforms to public services since 1945, and his relationships with leaders on the world stage, from Mandela and Clinton to Putin and Bush. He analyses the belief in ethical intervention that led to his decisions to go to war, in Kosovo, Sierra Leone, Afghanistan and, most controversially of all, in Iraq.

A JOURNEY is a book about the nature and uses of political power. In frank, unflinching, often wry detail, Tony Blair charts the ups and downs of his career to provide insight into the man, as well as the politician and statesman. He explores the challenges of leadership, and explains why he took on public opinion to stand up for what he believed in. He also looks forwards, to emerging power relationships and economies, and to Britain’s changing role, addressing the vital issues and complexities of our global world.

Few British prime ministers have shaped the nation’s course as profoundly as Tony Blair, and his achievements and his legacy will be debated for years to come. Amid the millions of words written about him, this book is unique: his own journey, in his own words.

This ebook is copyright material and must not be copied, reproduced, transferred, distributed, leased, licensed or publicly performed or used in any way except as specifically permitted in writing by the publishers, as allowed under the terms and conditions under which it was purchased or as strictly permitted by applicable copyright law. Any unauthorised distribution or use of this text may be a direct infringement of the author's and publisher's exclusive rights and those responsible may be liable in law accordingly.

Tony Blair has asserted his right under the Copyright, Designs and Patents Act 1988 to be identified as the author of this work

This book is a work of non-fiction based on the life, experiences and recollections of the author

First published in Great Britain in 2010 by

Addresses for companies within The Random House Group Limited can be found at: www.randomhouse.co.uk/offices.htm

To Cherie, Euan, Nicholas, Kathryn and Leo and my wider family who have shared the journey with me.

W
hen it was first suggested that I write this book, Bob Barnett, lawyer, friend and negotiator extraordinaire, expertly steered the negotiations that brought me to Random House. It has been a happy partnership ever since. I would like in particular to thank Gail Rebuck, a long-time friend and also, I can now add with pride, my publisher. Gail’s passion for this project, and her faith that she would one day receive a completed manuscript, despite indications to the contrary, never wavered.

I would like to pay tribute to the calm professionalism of her team at Random House. My foremost editorial thanks go to Caroline Gascoigne and David Milner, who have lived with this book almost as long as I have and who have been wonderful throughout. Thanks are also due to Susan Sandon, Charlotte Bush and Claire Round; John Swannell for the photo-shoot that produced the front cover; Richard Ogle for the cover design; Fiona Greenway for the picture research; and the rest of the dedicated production team.

In the USA, Sonny Mehta and Jonathan Segal of Knopf have been enthusiasts for this project from the start – I have found their guidance and advice to be invaluable.

Among my own team it would have been impossible without Catherine Rimmer and Victoria Gould standing over me as I wrote out each word on hundreds of notepads; refusing all phone calls, meetings and other welcome distractions from the creative process. As the publisher’s deadline approached, they even took my BlackBerry away from me. My researcher, Anthony Measures, provided facts and research material and tirelessly trawled through thousands of documents. I am grateful to my band of armchair book critics for their insights and editorial advice: Andrew Adonis, David Bradshaw, Alastair Campbell, Matthew Doyle, Peter Hyman, Philip Gould and Jonathan Powell.

There are countless people from my life in politics without whom this journey would never have begun: my agent in Sedgefield John Burton; his wife Lily and the members of the Sedgefield Labour Party, who put their faith in me right back at the beginning and whose loyalty has been steadfast ever since. I owe a huge debt of gratitude to my staff in the early years as Leader of the Opposition and then those in Downing Street; you could never wish for a more loyal and professional group of people – many of whom are mentioned in the book. Of course this book is dedicated to my family. So that tells its own story.

Finally, I would like to thank the people who now work for me in the new chapter of my journey since leaving Downing Street. I am constantly impressed by the enthusiasm and commitment they bring to helping solve some of the issues in the world today, on which I try to work: a greater understanding between the religious faiths; peace in the Middle East; solutions to climate change; and governance in Africa. They know who they are and they should be immensely proud of the work they do.

Forbidden Love: Fate (Zac and Ivy Trilogy Book 1) by Wanitta Praks
All I Want For Christmas Is A Vampire by Sparks, Kerrelyn
Quest for Anna Klein, The by Cook, Thomas H
For Honour's Sake by Mark Zuehlke
Miss Happiness and Miss Flower by Rumer Godden
Edge of Nowhere by Michael Ridpath
One Night of Passion by Elizabeth Boyle
One Kiss in Tokyo... by Scarlet Wilson
Then Summer Came by C. R. Jennings
Untold Damage by Robert K. Lewis