Read A Kiss and a Promise Online

A Kiss and a Promise 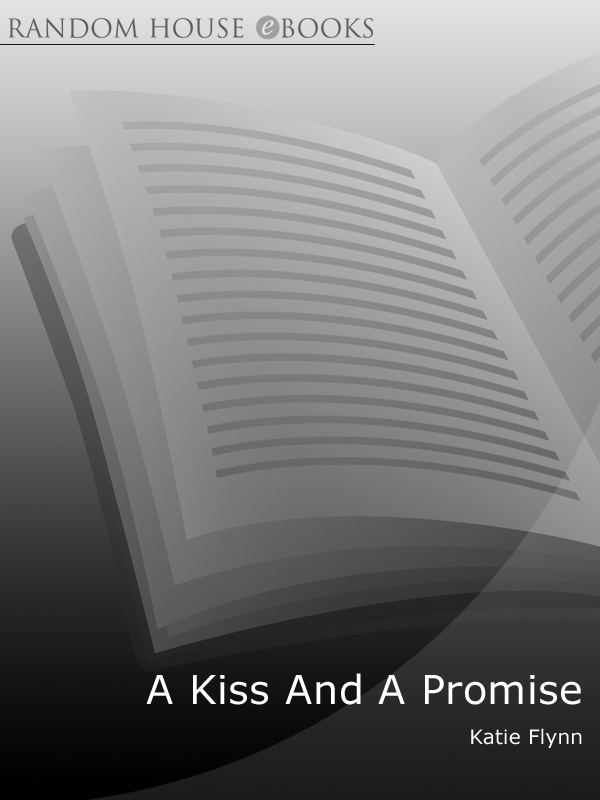 Katie Flynn has lived for many years in the North-west. A compulsive writer, she started with short stories and articles and many of her early stories were broadcast on Radio Mersey. She decided to write her Liverpool series after hearing the reminiscences of family members about life in the city in the early years of the century. She also writes as Judith Saxton. For the past few years, she has had to cope with ME but has continued to write, albeit more slowly.

Version 1.0
Epub ISBN 9781446427620
www.randomhouse.co.uk
Published by Arrow Books in 2003
1 3 5 7 9 10 8 6 4 2
Copyright © Katie Flynn 2003
Katie Flynn has asserted her right under the Copyright, Designs and Patents Act, 1988 to be identified as the author of this work
This novel is a work of fiction. Names and characters are the product of the author’s imagination and any resemblance to actual persons, living or dead, is entirely coincidental
This book is sold subject to the condition that it shall not, by way of trade or otherwise, be lent, resold, hired out, or otherwise circulated without the publisher’s prior consentin any form of binding or cover other than that in which it is published and without a similar condition including this condition being imposed on the subsequent purchaser
First published in the United Kingdom in 2003 by William Heinemann
Arrow Books
The Random House Group Limited
20 Vauxhall Bridge Road, London, SW1V 2SA
Random House Australia (Pty) Limited
20 Alfred Street, Milsons Point, Sydney,
New South Wales 2061, Australia
Random House New Zealand Limited
18 Poland Road, Glenfield,
Auckland 10, New Zealand
Random House (Pty) Limited
Endulini, 5A Jubilee Road, Parktown 2193, South Africa
The Random House Group Limited Reg. No. 954009
www.randomhouse.co.uk
A CIP catalogue record for this book is available from the British Library
ISBN 0 09 945342 8

For Edna Cubitt, one of my oldest friends, with whom it is always great to reminisce and have a giggle.

Michael Gallagher came up on deck, still with the stuffiness of the seamen’s mess in his nostrils, and took a deep breath of the cold night air. It was April, and in his imagination the breeze blowing across the Mersey was flower-scented and sweet. It reminded him of his home where, even now, primroses would be clustered around the brook which was the family water supply, whilst violets would be in bloom on the banks of the little lane that led to the village. Looking up, he reminded himself that the bright stars twinkling in the great arch of the dark sky above were the same as those his fellow countrymen would be seeing in far-off Kerry, and the thought made him long for his own place and his own people.

However, he had been fighting in the Royal Navy for eighteen months now and though he could not honestly say that he foresaw an early end to hostilities, he had made his bed and must lie in it. Furthermore, he knew that he would soon have some leave, and now that they were in dock he might actually have sufficient furlough to get to Kerry and back before his ship, HMS
Thunderbolt
, set out for America once more. He walked over to the rail and leaned on it, considering. The ship had come into Liverpool’s Canning dock for repairs and that meant the crew would soon be sent ashore – as soon as the shipwrights came aboard, in fact – which meant, in its turn, that he might as well go straight to the Sailors’ Home on Canning Place, and make sure of a bed.

But … it was a fine night, and though it was late, it was surely not so late that all the pubs would be shut? He had docked in Liverpool once before and remembered a jolly sort of place where his fellow countrymen tended to congregate … if he could just remember where it was. He did remember the creaking signboard and the size and joviality of the landlord, but as for its exact location … well, he would have to leave it to chance.

Usually, Michael would have been with his pals and they would all have left the ship at the same time, taken adjacent beds in the Sailors’ Home and then gone out for a booze-up together, but tonight he had been in the seamen’s mess, writing home, and had not wanted to leave his letter half finished. The ship had been on convoy duty, crossing and recrossing the Atlantic, so though he did get the chance to write to his parents when he was not on watch, posting such missives was a different matter, and therefore, he reminded himself now, his first duty was to find a post box.

Having made up his mind on this, he picked up his kitbag and began to make his way down the gangway. As he descended, a kitten, white as snow save for a pair of huge reflective eyes, came, tail-erect, across the short distance which separated them and gave a shrill, enquiring mew. It had probably been drawn to the quayside by the strong smell from fish boxes, Michael thought, but it would be disappointed, for the boxes were either empty or tightly closed. He felt in his pocket, but came up with nothing more exciting than a small square of chocolate. He guessed that the kitten would not be interested in such an offering but squatted down anyway and held out a hand.

Immediately, the small creature came to him, rubbing against his fingers, then dashing off into the shadows, only to return seconds later, white whiskers bristling with excitement, snowy paws as silent as a breath on the cobbled surface. Clearly, it wanted companionship and a game rather than food.

‘All right, little feller, you can sit on me shoulder until you get tired of doin’ a balancin’ act,’ Michael said, bending to pick up the kitten. It immediately swarmed on to his shoulder as though it had understood every word and settled itself comfortably, tail neatly curled, paws together, whilst a rumbling purr vibrated against Michael’s ear, making him laugh aloud. ‘Ah well, I’ve always had a fondness for cats, so I have,’ he informed it, beginning to stride towards the dock gates. ‘You’re a friendly wee feller so y’are, but don’t I just wish you could talk! Then you could tell me the name o’ the pub where us Irish fellers go … perhaps even take me there!’

With the kitten still perched on his shoulder, he had almost reached the dock gates when he saw a figure standing in the deep shadow directly outside the dock area. The kitten saw it too and its purr stopped as though a switch had been turned off. It leaped lightly off his shoulder and disappeared behind a stack of timber, one moment a little white ghost-cat, the next apparently gone without a trace.

The figure within the shadow moved and Michael stopped abruptly. Was he not a Kerry man, reared on superstition and with a strong belief in the supernatural? Now that he came to think of it, it was strange enough to find a white kitten on the quayside, let alone one which could disappear at will. And was not the female figure which came gliding out into the moonlight the very image of one of the faery creatures which haunted the bens and glens of his own country? She was very dark, her gleaming mass of black hair waist-length, her eyes frighteningly like pits in the pure oval of her face.

‘Oh, how you startled me!’ The girl’s voice, soft and clear though it was, was reassuringly human, touched with the familiar Liverpudlian accent. ‘I thought I was the only soul down here at this hour of the night, so I did.’

‘Is it late?’ Michael asked vaguely. He realised that he had no idea of the time but guessed from her tone that it must be after midnight. ‘Come to that, it’s terrible late for a young lady like yourself to be prowling the docks; dangerous, too. Why, you might get into all sorts of trouble; sailors can be wild when the drink’s on them.’

‘I was searchin’ for Sunny,’ the girl said. ‘He’s only young and he’s terrible foolish. I were afraid he might see a movement in the water and jump before he’d thought, so to speak. You haven’t seen him?’

Michael was about to reply that he had seen no one save herself when it occurred to him that he might have got hold of the wrong end of the stick. ‘I’ve seen a little white cat, more of a kitten really, so I have,’ he said cautiously. ‘He were on me shoulder until you moved, but then he took fright and streaked off. He went behind that pile o’ timber. Is your Sunny a little cat or are you searchin’ for a young feller?’

The girl gave a trill of amusement and squatted down on the cobbles as Michael himself had done earlier. ‘Sunny’s a cat, o’ course,’ she said. She made a chirruping sound and held out her arms and Michael watched as the kitten emerged from its hiding place. It was still playing some private game of its own and rushed towards the girl, gathered itself as if to spring, and then abruptly tore away again, this time to scale a pile of abandoned fish boxes, its tail fluffed out with excitement.

The girl sighed and stood up. ‘The moonlight’s gorrin to his blood and he’s mad as any March hare,’ she said resignedly. ‘He’s been playin’ the fool all the way down here, lettin’ me get within a foot of him and then whiskin’ away again. Oh dear, and I’m dreadfully tired.’ She turned towards the cat again. ‘Come to Stella, Sunny, and you shall have a whole saucer of conny-onny and a sardine as soon as I can lay me hands on one. Please, Sunny, don’t give me no more hassle.’

Michael saw that the cat’s whole attention was fixed on its young mistress and he moved swiftly, grabbing the animal round its waist before it had any idea that he was a threat. The girl gave a squeak of joy and tried to take the kitten from him but Michael, wrapping Sunny in the folds of his duffel coat, shook his head. ‘He’s drunk on moonlight and the dark and won’t take to being held easily,’ he said. ‘I was lookin’ for a pub where I could get me a drink but I hadn’t realised it was so late. Do you live far from here? Wherever you live, I might as well walk you home. I’d feel bad not keepin’ an eye on you and your little cat so if it’s all the same to you, miss, I’ll tek the pair of ye to your door.’

The girl looked doubtful. ‘I live in one of the courts off Rathbone Street. It’s not far but, honest to God, there’s no need for you to come. If you’ll just hand me the cat …’