A Lesson of Intensity: Season of Desire Part 2 (Seasons Quartet) 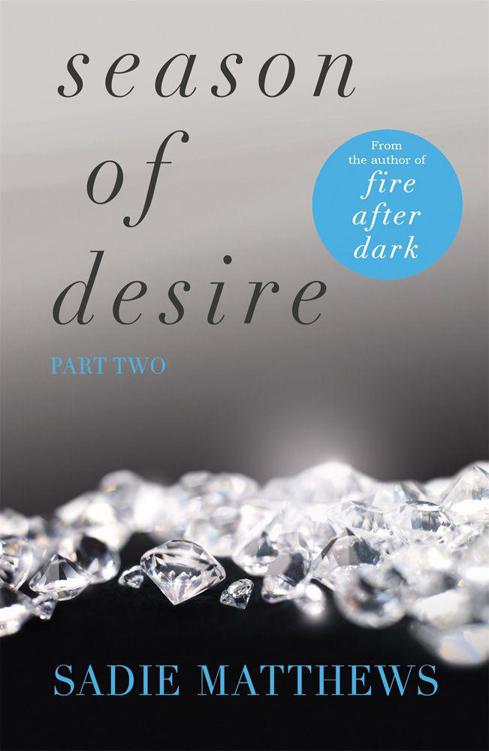 A Lesson of Intensity

The right of Sadie Matthews to be identified as the Author

Have you read the After Dark series?

We are possessed by our passion, kissing each other wildly, desperate to touch one another. I lift Miles’s jumper and he quickly shuffles it off. I help him unbutton his shirt, our fingers meeting in delightfully charged clashes as we fumble with the buttons, and then he pulls it hastily from his shoulders so that I can see the impressive sight of his naked chest. His upper torso is magnificent, tanned and bulging with muscles. I moan lightly at the sight, while he tugs at my top, lifting it up and yanking it over my head to reveal my white cotton bra. My nipples are already stiff and erect with the force of my need for him. I wriggle out from under him, get to my feet, undo my jeans and slide them off. I don’t want to waste too long in preliminaries – I want to get down to action and satisfy the longing that’s burning inside me. More than anything, I want to enjoy the promise of the erection I’ve felt pressed against me. Just in my underwear, I get back onto the bench, squeezing on beside him, and wrap my arms around his neck.

‘Let’s get going,’ I urge him, my eyes sparkling, and I start to kiss his lips while my hand goes to the fastening on his jeans. ‘Come on, I really need this.’

A strange expression fills his eyes – a kind of doubt.

‘What is it?’ I ask impatiently. ‘Come on, Miles, let’s do it…!’ I go to kiss him again, but he frowns, turns his head to avoid me, and pulls away.

‘What is it?’ I say, panting. I reach for his arms, trying to turn him back to me, but the strength of his muscled body is far too much. I’m utterly ineffectual.

‘Fuck me?’ I whisper. I’m throbbing with lust. I want to be dirty – think dirty, talk dirty, do dirty things and release the pent-up need inside me. I’m sure  we both want it to happen…

But my words don’t inflame him. If anything, they seem to create a chill in the atmosphere.

‘If you want to put it as crudely as that.’ He turns his face back to me and I can see that his eyes have lost that look of glassy desire that’s been turning me on so acutely.

‘Please?’ I say, my voice full of yearning. I’m staring at his mouth. How have I only just noticed how perfect it is? An exquisitely formed pair of lips that promises so much and, I know now, can deliver that promise. ‘Please, Miles, don’t stop.’

He gazes downwards. ‘But if that’s what it is… if I’m simply fucking you… That’s all wrong, can’t you see that?’

I let go of his arms and prop myself up on my elbows. I feel my inflamed passions begin to subside. He’s ruining this moment. I was so deeply into it, so desperate for him, so fired up that I knew whatever happened would be explosive for us both. How can he pull back now? My sex is practically whimpering with need and I shift a little with the insistent ache that’s still throbbing there.

‘What’s wrong with fucking?’ I ask. The force of my thwarted desire makes it come out more sharply than I meant it to.

‘You know what I’m talking about.’

I shrug, trying to pretend insouciance, hoping that if I can convince him that there’s nothing to worry about, he’ll stop fretting and get back to what our bodies are begging of us. He can’t be immune to what’s just raged between us, can he? I know that I didn’t imagine that glorious steel-hard cock.

The image makes a hot shiver course over me and my stomach does a huge flip.

I groan inwardly.
Oh my God. Stop it. I can’t stand it…

‘People fuck all the time,’ I say, trying to sound airy and sophisticated. ‘What’s the problem?’

It’s true that in my world there’s a lot of casual sex. Something about money seems to make everyone who comes into contact with it incredibly horny. Perhaps it’s because when you have plenty of it, the only thing you need to think about is how to enjoy yourself. Money buys indulgences, like booze and drugs and hot nights by the sea in beautiful places. When you’re young, rich and carefree, the thrills of sex are sometimes the only real thrills left… I’ve known boys who’ve grown up with too much cash, who discover that dozens of girls want to sleep with them. Lots of those girls are on the make and the result is that the guys expect sex not too long after the first hello. The problem for me was that casual encounters just weren’t my scene. I hide it well, but I’m a romantic. I had my first experiences – the kissing and petting and explorations – with guys I really liked and who I hoped liked me in return. Some were jerks, and some were wonderful but I didn’t want my first real lover to be a one-night stand or just a casual fling. I needed to feel that I was in a couple situation before I had sex with someone. Feeling emotion for the other person, and feeling cherished by him, was everything for me. That’s why I waited until it was no-holds-barred love before I slept with Jacob, my first real boyfriend and only sexual partner. At least, that was what I thought it was.

‘What’s the problem?’ he echoes. He frowns, that crease appearing between his black brows. I’ve seen him frown a lot since yesterday.

‘Don’t you want to?’ I say almost helplessly. I’m bewildered. This man seemed to be possessed with desire for me, and now he’s put on the brakes and the whole thing has skidded to a halt. I don’t understand. I thought men were hungry, unstoppable beasts as far as sex was concerned. Jacob was like that: always eager for it, persistent, determined to slake his desires with me. If I kept up, well and good; if I didn’t, that was my problem. Is this man different?

His lips tighten again in that way I’ve realised expresses his inner agitation. ‘Of course I want to – I think you can tell that, Freya.’

God, I love the way he says my name.

His Scottish accent seems to curl softly around it, giving it a beauty I’m not used to hearing. My father only uses my name when he’s angry, so it sounds like a swear word when he says it – I’m usually ‘honey’ or ‘sweetie’ to him. My American friend Lola gives it a tinny twang. My posh English friends leave half of it out so that it sounds like ‘Frere’. But Miles’s ‘r’ rolls slightly, lengthening it and making it almost poetic. For the first time I understand how it might be the name of a goddess.

‘Then why stop?’ I whisper huskily.

He gets up and begins to stride around the small room as best he can, considering that one step takes him almost across it.

‘Christ!’ he says through clenched teeth. ‘You know why! I’m in a position of trust as far as your father is concerned. You might believe you want this, but think about how it would look to someone on the outside. A bodyguard in sole charge of a beautiful young girl ends up bedding her less than twenty-four hours after a distressing car accident in which she sustains serious bruises. It would look as though I’m taking advantage of you, at the very least.’ He stops and looks down at me with almost a pleading expression. ‘Can’t you see? I could lose my job and maybe my career if there’s any hint of me crossing the line.’

I gaze back at him. ‘But I
want
you to! I’m the one who’s crossing the line.’ I sit up and then get to my feet. I’m wearing only my underwear and the heat of our exertions is wearing off. The chill in the hut is making my skin goosebump and my nipples stand up stiffly against my bra. I can see his eyes drop to my breasts but he looks away quickly. I glance down and see that yesterday’s bruise is still livid across my chest, a sharp diagonal that’s turning a bluish purple. I haven’t even felt it in the fervour of my desire but no doubt the sight of it has reminded Miles of my vulnerability and the fact that he’s charged with my wellbeing.

I put one arm over the bruise to cover it, hoping he’ll forget it if it’s out of sight, and tip my head winsomely on one side. ‘Please, Miles…’ I say beseechingly.

His voice when he speaks is cracked slightly as though he’s fighting some inner turmoil. ‘It makes no difference. It might be what you want but it’s up to me to hold back. No matter what you say, people will always assume I coerced you. Or they’ll think I should have refused. And they’d be right.’

I stare at him, desire flowing over my skin again. He’s standing just a few feet away, his torso naked, and it’s all I can do to stop myself reaching out to touch him. That tanned skin looks warm and inviting and I can’t help admiring his well-muscled physique. He clearly keeps himself in peak condition – I suppose being fit and strong is a requirement of his job. I can see the bulge of his biceps, the definition of his pectoral muscles, and the ripple of hard abs down his belly. Muscle men have never turned me on – Jacob was slim and boyish – but the beautiful shape of Miles’s body and the strength it contains is making my throat go dry with longing. I notice the trail of dark hair emerging from his jeans and circling his belly button, and soft scatter over his chest and round the dark red bullets of his nipples, and I can’t help biting my lip. He’s so gorgeously male, so different to Jacob’s smooth skinniness, and my body thrills at the sight of him.

The words come unbidden into my mind and instantly I’m certain of it.

But how am I going to break through his stubborn resistance?

I’ve only ever really known one way to get what I want. I lift my chin haughtily and stare him straight in the eye.

‘I don’t care what people might think, especially if they’re wrong. I’m not a helpless child,’ I reply in lofty tones. ‘Anyway – I order you to do it.’

The Second Life of Samuel Tyne by Esi Edugyan
Adrastia (The God Chronicles Book 4) by Kamery Solomon
The Archer's Daughter by Melissa MacKinnon
Once Upon a Project by Bettye Griffin
The Mystery of the Emeralds by Kenny, Kathryn
The Summer Everything Changed by Holly Chamberlin
Designer Knockoff by Ellen Byerrum
A Crabby Killer by Leighann Dobbs
Phantoms of Breslau by Marek Krajewski
Cruel Death by M. William Phelps