Read A Light in the Window Online

A Light in the Window 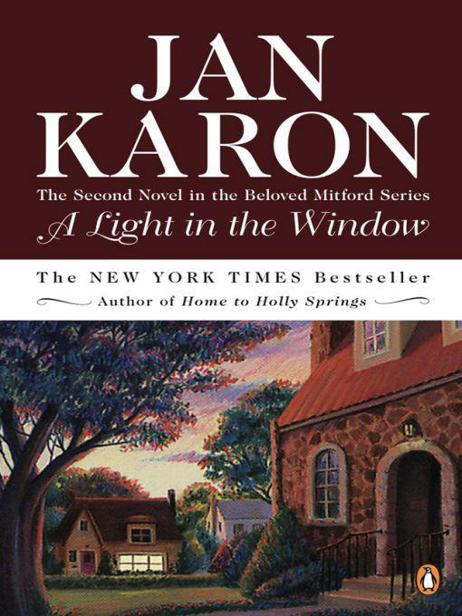 PENGUIN BOOKS
A LIGHT IN THE WINDOW
Jan Karon writes “to give readers an extended family, and to applaud the extraordinary beauty of ordinary lives.” She is the author of nine Mitford novels,
At Home in Mitford; A Light in the Window; These High, Green Hills; Out to Canaan; A New Song; A Common Life; In This Mountain; Shepherds Abiding;
and
Light from Heaven,
all available from Penguin. She is also the author of
The Mitford Bedside Companion; Jan Karon’s Mitford Cookbook
&
Kitchen Reader; A Continual Feast: Words of Comfort and Celebration, Collected by Father Tim; Patches of Godlight: Father Tim’s Favorite Quotes; The Mitford Snowmen:
A
Christmas Story; Esther’s Gift;
and
The Trellis and the Seed.
Her children’s books include
Miss Fannie’s Hat; Jeremy: The Tale of an Honest Bunny;
and
Violet Comes to Stay.
Coming from Viking in fall 2007 is the first Father Tim Novel,
Home to Holly Springs.
www.mitfordbooks.com
Join the Mitford community online to share news, recipes, birthday greetings, and more, and to receive notes from Jan and special offers.

A Light in the Window

CHAPTER ONE
Close Encounters
Serious thinking and crossing the street, he once said, shouldn’t be attempted simultaneously.
The red pickup truck was nearly upon him when he saw it. The shock of seeing it bear down with such ferocious speed sent him reeling backward to the curb, where he crashed in a sitting position. He caught a fleeting glance of the driver, talking on a telephone, as the truck careened around the corner.
“Father Tim! Are you all right?”
Winnie Ivey’s expression was so grieved he felt certain he was badly hurt. He let Winnie help him up, feeling a numb shock where he’d slammed onto the curb.
Winnie’s broad face was flushed with anger. “That maniac! Who was that fool, anyway?”
“I don’t know. Perhaps I’m the fool for not looking where I was going.” He laughed weakly.
“You’re no such thing! I saw the light, it was still yellow, you had plenty of time to cross, and here comes this truck roarin’ down on you like a freight train, and somebody in it talkin’ on a phone.”
She turned to the small crowd that had rushed out of the Main Street Grill. “A phone in a truck!” she said with disgust. “Can you believe it? I should have got his license number.”
“Thank you, Winnie.” He put his arm around the sturdy shoulders of the Sweet Stuff Bakery owner. “You’ve got a special talent for being in the right place at the right time.”
Percy Mosely, who owned the Grill, ran out with his spatula in his hand. “If I was you, I’d ask th’ good Lord to kick that feller’s butt plumb to Wesley. Them poached eggs you eat are now scrambled.”
The rector patted his pockets for the heavy office key and checked his wallet. All there. “No harm done,” he assured his friends. The incident had simply been a regrettably dramatic way to begin his first week home from Ireland.

Though he’d spent the summer in Sligo, he found on returning that he hadn’t, after all, missed summer in Mitford. His roses bloomed on, the grass lay like velvet under the network of village sprinklers, and parishioners were still leaving baskets of tomatoes on his porch.
As he came up the walk to the rectory, he heard a booming bark from the garage. It was the greeting he had missed every livelong day of his sojourn across the pond.
Since returning home less than a week ago, he had awakened each morning to see Barnabas standing by the bed, staring at him soberly. The inquiry in the eyes of his black Bouvier-cum-sheepdog companion was simple: Are you home to stay, or is this a joke?
He walked through the kitchen and opened the garage door, as Barnabas, who had grown as vast as a bear during his absence, rushed at him with joy. Laying his front paws on the rector’s shoulders, he gazed dolefully into the eyes of his master, whose glasses fogged at once.
“Come now, old fellow. Slack off!”
Barnabas leapt backward, danced for a moment on his hind legs, and lunged forward to give the rector a great lick on the face that sent a shower of saliva into his left ear.
The victim dodged toward his parked Buick and crashed onto the hood with his elbow. “ ‘Sing and make music in your hearts,’ ” he recited loudly from a psalm, “ ‘always giving thanks to the Father for everything’!”
Barnabas sat down at once and gazed at him, mopping the garage floor with his tail.
His dog was the only living creature he knew who was unfailingly disciplined by the hearing of the Word. It was a phenomenon that Walter had told over the whole of Ireland’s West Country.
“Let’s have a treat, pal. And you,” he said to Dooley’s rabbit, Jack, “will have beet tops.” The Flemish giant regarded him with eyes the color of peat.
The house was silent. It wasn’t one of Puny’s days to work, and Dooley was at football practice. He had missed the boy terribly, reading and rereading the one scrawled message he had received in two long months:
ADS
15.4Mb size Format: txt, pdf, ePub

Second of the Winterset Coven by T. S. Joyce
Commit to Violence by Glenn, Roy
Delicate by Campbell, Stephanie
Muses of Terra (Codex Antonius Book 2) by Rob Steiner
The Newsmakers by Lis Wiehl
Understanding Sabermetrics by Costa, Gabriel B., Huber, Michael R., Saccoma, John T.
Morgan and Archer: A Novella by Burrowes, Grace
What Happens in London by Julia Quinn
In Black and White: The Life of Sammy Davis Junior by Wil Haygood
Los vigilantes del faro by Camilla Läckberg