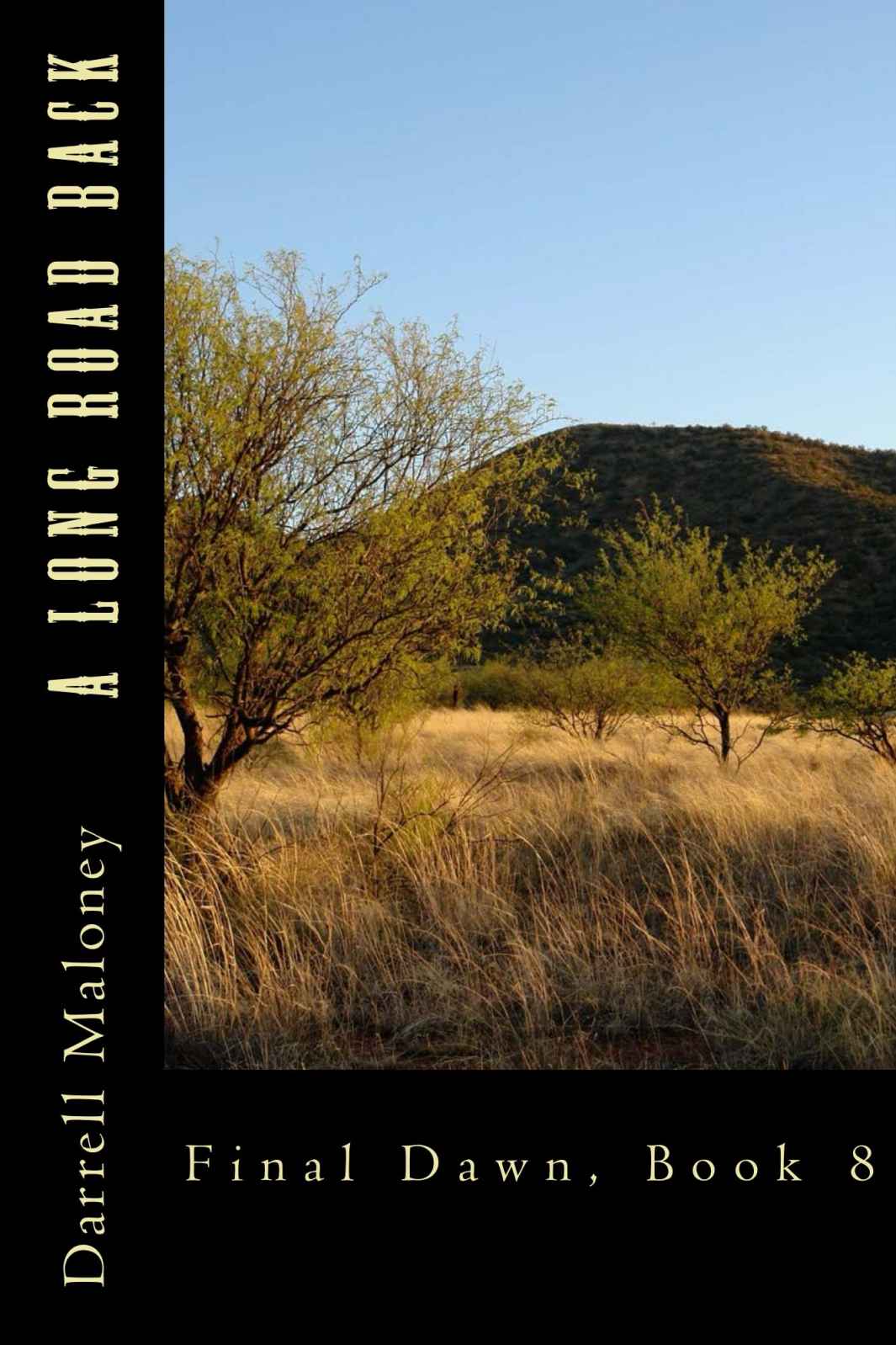 This is a work of fiction. All persons depicted in this book are fictional characters. Any resemblance to any real person, living or dead, is purely coincidental. Copyright 2016 by Darrell Maloney

This book is dedicated to Roxanna Holliman Jared:

My friend, my muse, my significant other, whom God put in my life to help keep me on course.

Mark and Hannah didn’t seem well suited at first. He was the class clown. She was the beautiful Mensa candidate. He couldn’t decide on a major. Hers was clear from the start.

It was strictly by chance that they both ended up at Baylor University in Texas.

Mark had a serious side too, but few people saw it. He had a passion for engineering, although he had trouble making up his mind which discipline to delve into.

Hannah wanted to be an astrophysicist since she was a young girl, gazing up at the stars on her grandmother’s ranch.

“Someday,” she told her grandmother, “I want to go up there. I want to fly to the stars and see them up close. I might even build myself a house on one and live there.”

She’d given up on her star house long before. But she was still passionate about the heavens, and her dream of becoming an astrophysicist came true.

She’d never had any doubt that it would.

Hannah and Mark met by accident in front of Baylor’s administration building.

Hannah happened to be walking past when Mark exited the building after changing his major for the third time. Electrical Engineering had caught his fancy, and he’d rearranged his course schedule to dive into it.

It was Hannah’s beauty which turned his head as she walked past.

Turned his head and prevented him from seeing the three steps until it was too late.

Mark tumbled down the steps, his papers and books flying in all directions, and Hannah couldn’t help but smile.

It would have ended then and there if Hannah had just kept walking.

But she was as sweet as she was beautiful, and she just couldn’t leave Mark sprawled all over the sidewalk. So she helped him up and helped him gather his papers.

Mark had never been one to hide his feelings. Even with someone he’d just met.

“My God, you’re gorgeous. You’re going to marry me someday.”

“As sure as I’m standing here.”

She winked at him and said, “Maybe you should learn to walk down steps before you try to walk me down the aisle.”

But they wouldn’t have a fairy tale ending.

A year later Hannah discovered that a meteorite, designated Saris 7, was on a collision course with earth some two years into the future, and immediately reported it to her superiors.

But they already knew, and swore her to secrecy.

“Because we have plenty of time to divert it or destroy it. If we tell the public about it, there will be worldwide panic. Mass suicides. Economic collapse. There will be no collision. So there’s no reason for the public to even know about it.”

It took Hannah and her coworker Sarah several months to see that their superiors were lying to them. NASA had evaluated their capabilities and determined they had no means of destroying or diverting Saris 7. Perhaps if they had a few more years to develop such a capability, they said…

But they didn’t have the time.

It so happened that two days before Hannah discovered Saris 7, Mark had purchased a PowerBall ticket.

And against all odds, he hit the jackpot.

They were suddenly millionaires, but had only two years to spend their new fortune.

Before Saris 7 came crashing to the earth and ended life as they knew it.

Mark said, “We might as well blow it. Quit your job and we’ll sail the world. We’ll live like royalty and then go out in a blaze of glory.”

“No,” Hannah countered. “We’re going to use this to prepare. To save the ones we love.”

The couple purchased an abandoned salt mine near the city of Junction, Texas. For two years they secretly renovated it into a comfortable place to live for their family members and closest friends. At the same time, they had a secret compound built just adjacent to the mountain.

To use when the world thawed out again.

Then they stocked the mine with everything they’d need to ride out the chaos. Livestock, seeds, food stores, water and fuel.

For six and a half long years they isolated themselves in the mine, while the world changed around them.

On the outside, few survived.

The world became a harsh and evil place. Survivors grew accustomed to taking what they wanted by force.

When the world warmed enough to allow the group to transition from the mine to the compound, they weren’t aware of the evil outside their gates.

And although they took many precautions to keep their existence a secret from the outside world, word got out.

The evil came to them.

For they had been successful in keeping their animals and their plants alive.

They had things others didn’t have.

The group of forty one successfully fended off a brutal attack which thinned their numbers and hardened them. It brought home the point that they’d always have to be on their guard. There would always be men who saw nothing wrong with taking from others at gunpoint.

They avoided a war with the United States Army by agreeing to donate half their livestock to the ongoing relief effort in nearby San Antonio. And in the process, they made a friend of an Army colonel named Montgomery.

In the last installment, Colonel Montgomery took John and Hannah in his helicopter to witness first-hand the good their animals were doing.

John had flown in helicopters in Vietnam. Hannah had never been in one, and was as excited as a child on her way to a fair.

John’s daughter Sami had a premonition that something bad was going to happen.

On the way back from San Antonio, the chopper’s pilot suffered a massive heart attack while at the controls.

He had a co-pilot. But they were flying at treetop level at sixty nautical miles an hour when the pilot slumped forward against the stick.

The chopper nose-dived into the forest and there wasn’t time for the co-pilot to stop it.

Hannah did, but barely. She and the only other survivor, a crewmember named Joel, kept each other alive while they waited to be rescued.

Meanwhile, back at the compound, Sarah went for a walk in the woods, to pick some wildflowers.

A bloodhound was brought in, and followed Sarah’s scent through two miles of dense forest, only to lose track of her.

“This is where she left the ground,” the dog’s handler explained to an anguished Bryan.

“This is where she either got onto a horse or into a vehicle.

“From here, she could have gone anywhere.”

While Bryan and the others desperately searched for Sarah, Hannah continued her slow recovery in a military hospital. Her homecoming was dampened by a horrific pall which hung over the compound and its occupants: the knowledge that too much time had passed and Sarah had probably perished in the woods.

But while everyone else gave up, Bryan didn’t. And Sarah didn’t die. She survived, and as the dog’s handler had claimed, had left the forest alive.

But not on her own. She was attacked and knocked unconscious by a brutal man who’d stumbled across her and decided to take her home with him.

He stripped her naked and carried her to a stolen pickup truck where he tossed her into the back as though she were game.

Then he took her to be his slave.

The blow to the back of Sarah’s head took away her memory.

Her captor, Nathan Martel, was a most brutal man.

He was also a man who liked to play games with peoples’ minds.

Sarah’s amnesia played perfectly into his hands. Instead of keeping her bound to prevent her escape, he convinced her they were husband and wife. And that she lost her memory during an accident.

Martel called her Becky, and claimed she was his bride.

And she believed him. She believed not only were they very happily married, but were also all alone in the world.

That all of their neighbors were hostile and jealous because Nathan, in his great wisdom, had prepared for Armageddon better than anyone else around.

That those same neighbors were so jealous of Nathan and Becky, were so hostile, that they’d shoot them on sight.

And that was why they stayed to themselves. Seldom strayed from the farm, unless Nathan was going out to gather supplies.

Sarah… Becky… was content. After all, staying at the farmhouse wasn’t a bad thing. It was big and comfortable and had most everything they needed.

Eventually Bryan found her and broke in to rescue her. A battle was waged between her true husband Bryan, and the evil man who’d claimed her as his own.

There was fire in her eyes.

She started pummeling Bryan with her tiny fists, one right after another against his chest.

He didn’t understand. Not at all.

He succeeded in catching her hands and held them both tightly by the wrists.

“Sarah, honey, what are you doing?”

“Why? Why are you doing this?”

“Doing what? Sarah, what’s the matter?”

“Who are you and why did you kill my husband?”

Bryan said, “What are you talking about? Honey, you and I were married seven years ago.”

The other men burst into the room as Bryan released his wife’s wrists.

She went running to Martel’s side, sobbing hysterically every step of the way.

Bryan was confused. Sarah was inconsolable. It took some doing to convince her that Martel was an evil man who had only his own best interests in mind.

Sarah eventually returned home to the compound. But her long journey back was only beginning.

And now, Book 8 of the series:

A LONG ROAD BACK