A Marriage of True Minds: A Sasha McCandless Novella 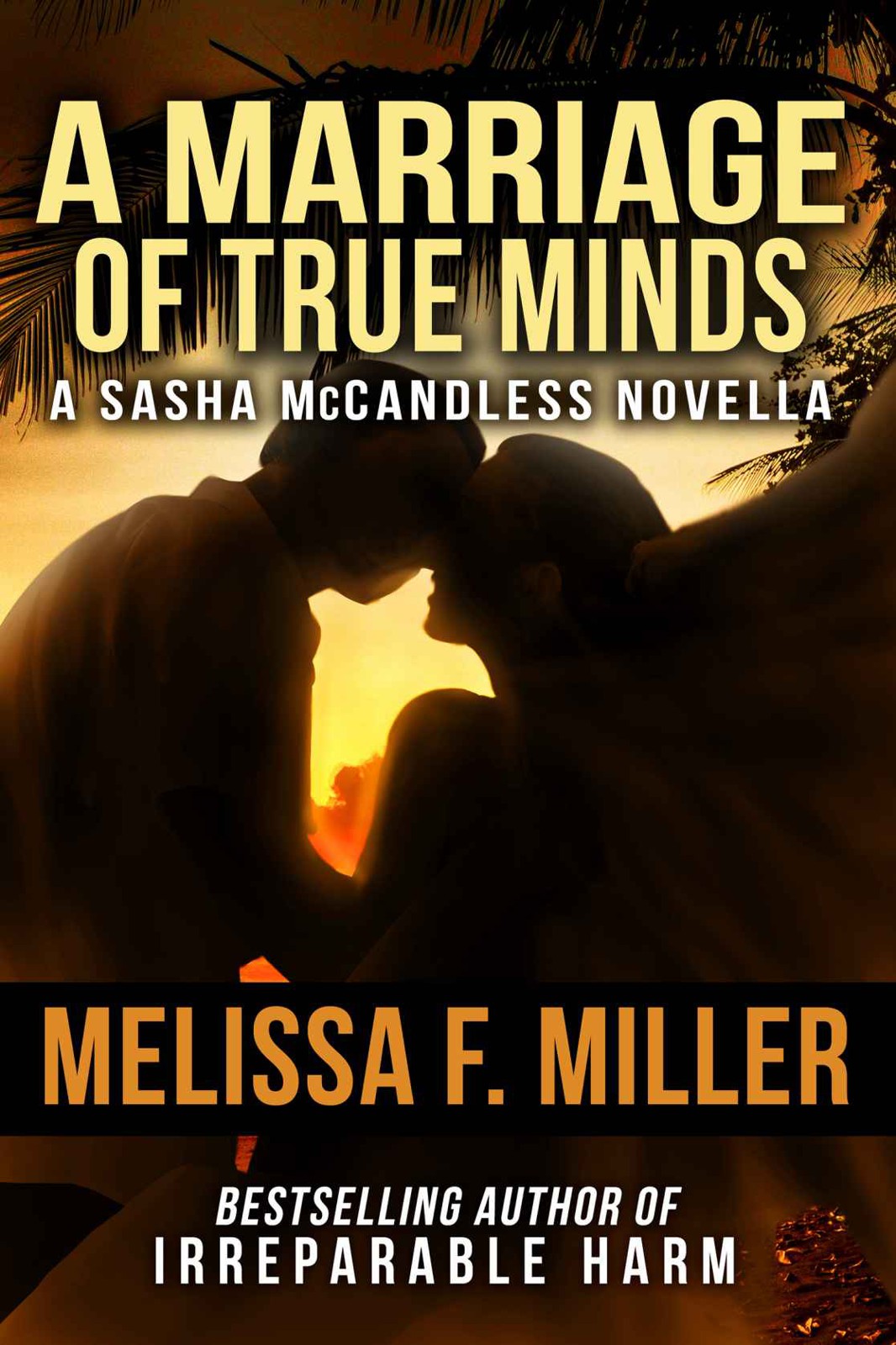 A MARRIAGE OF TRUE MINDS

This novella (approximately 18,000 words
or 75 printed pages) is intended for my existing readers, who’ve been invited
to attend Sasha and Leo’s wedding! If you’re new to the series, I recommend you
start with any one of the full-length legal thrillers, which you can find at
smarturl.it/sashaseries, and come back to this when you know Sasha and Leo a
little bit better. I think you’ll enjoy the novella more that way—after all,
who wants to go to a stranger’s wedding?

This book is a work of fiction. Names, characters,
places, and incidents either are the product of the author’s imagination or are
used fictitiously. Any resemblance to actual persons, living or dead, is
entirely coincidental.

For more information about the author,

For more information about the publisher,

Special thanks to DC, GC, and DG, the
other three horsewomen, who
insisted
Sasha and Leo deserved a proper
wedding. Sincere appreciation to my editing and proofreading team, especially
Curt Akin and Lou Maconi. Any mistakes or errors that remain are mine and mine
alone. Finally, and always, my love to my understanding and supportive husband
and children.

Let me not to
the marriage of true minds

Admit
impediments. Love is not love

Which alters
when it alteration finds,

Or bends with
the remover to remove:

O no! it is an
ever-fixed mark

That looks on tempests
and is never shaken;

It is the star
to every wandering bark,

Whose worth’s
unknown, although his height be taken.

Love's not
Time's fool, though rosy lips and cheeks

Within his
bending sickle’s compass come:

Love alters not
with his brief hours and weeks,

But bears it out
even to the edge of doom.

If this be error
and upon me proved,

I never writ,
nor no man ever loved.

Naya stood, one
hand on a silk-sheathed hip, the other, palm up, waiting to receive Sasha’s
Blackberry.

Naya glanced
behind her for support from her fellow bridesmaids. Only Maisy, relatively
fearless as befits a television journalist, dared to respond.

“Really,” Maisy
agreed. She bobbed her head vigorously, and her curly blonde updo bounced,
threatening to tumble out of its knot and over her shoulders.

Sasha’s
sisters-in-law pretended not to be aware of the face-off. Riley listened with
apparent fascination to Jordan’s enthusiastic description of the stainless
steel food mill she used to make homemade baby food.

“False.
My
rule
is no weapons at the wedding. Connelly’s the one who said no cell phones.”

Only their
wedding would include guests who would otherwise attend with a firearm
holstered on one side, and a mobile phone on the other.

“Same
difference. You’re about to be united as one. Your husband said leave the
phones at home or in the suites. You can’t be the one who disregards his rule.”

Her maid of
honor had a point. If ever there was a time to let her calls roll to voicemail,
it was probably during her wedding weekend.

No need to
concede so easily, though. She’d worked with Naya long enough to know that the
better course was to let Naya think her victory was hard-won.

“What? You think
I’m going to obey him, suddenly?”

Naya gave her
the
look
.

“No. But I think
it would be very rude for you to show up at the rehearsal with your phone. Now,
will you please stop being a brat and give me the phone?”

“Fine. But it’s
on you if we miss a client emergency tonight.”

Sasha powered
off the device and slapped it into Naya’s open palm.

“It’s New Year’s
weekend. There aren’t going to be any client emergencies, unless you’ve started
practicing DUI law and forgot to tell me. Everything is tied down at home, and
if an emergency does crop up, I’ve arranged to refer it to Mickey.”

Admittedly,
she’d been distracted for most of December, what with planning a wedding
abroad, holiday preparations, and taking care of the administrative niceties
involved with adding Will Volmer as a partner in her law firm. She’d been more
than happy to let her usually able legal assistant handle the coverage
arrangements for the days that the entire firm would be in Nicaragua
celebrating her nuptials. But Mickey Collins? A class action plaintiff’s
attorney was hardly the logical choice to backstop a corporate defense firm.

“Yes, Mickey
Collins. And don’t even start. Will approved it. Mickey likes you. He’ll do a
good job, and nothing’s going to come up anyway. You know you just want to
check the kitty cam at the pet hotel so you can make sure Java’s being
spoiled.”

Naya’s tone was
brusque but her eyes were laughing.

Sasha tried to
hide her grin. It was true, she’d passed quite a bit of time watching her cat
nap on a fluffy pillow thanks to the magic of the eco-resort’s free wireless
service—in between leisurely walks on the snowy white private beach with
Connelly, hikes through the lush, green jungle, and decadent picnic lunches
perched on the rocks above the cove where the dolphins played tag in the surf.

She’d spent the
past three days relaxing without any thought of what might be happening at the
offices of McCandless & Volmer, LLP. There was no reason to ruin her track
record now. All that was left was the wedding rehearsal, the rehearsal dinner,
and then, tomorrow, the wedding itself.

The wedding.
A little shiver
of anticipation inched up her spine.

In a little more
than twenty-four hours, she and Connelly would be married, and their
destination wedding would magically convert into a honeymoon, while Naya and
Will returned to the law firm and the real world with the rest of their guests.

The thought of
weaving her life together with Connelly’s made her catch her breath. The force
of her feelings almost knocked her off balance.

She let her eyes
travel around the cozy room and fall on each of the women who’d come to stand
next to her as she wed Connelly, and her joy increased until she felt as though
her heart might burst.

A gentle tap on
the door forestalled whatever gooey speech was about to pour from her mouth.

The thatched
door eased open inward and her mother’s impeccably coiffed hair filled the
opening, followed by the rest of her.

“How are we
doing in here, girls?” Valentina asked, letting her eyes travel slowly over the
assembled group in search of a bra strap peeking out from a dress or a tendril
of hair that had escaped its bun.

Satisfied, she
turned her attention from the bridesmaids to her daughter. The assembled women
shared a communal breath of relief at having passed inspection. And this was
just the
rehearsal
. Sasha didn’t want to imagine the level of scrutiny
her mother would bring to bear to the actual wedding.

Sasha looked
over her mother’s shoulder for Charlotte Givens, knowing that where her mother
went, the resort’s wedding coordinator was certain to follow.

And, sure
enough, the trim, British expatriate ducked under Valentina’s arm and slipped
into the room with an apologetic smile.

“Ladies,” she
said sunnily, “Christopher has asked for just a few more moments alone with the
piano and then we can start the rehearsal. Any jitters, questions, concerns?”

Naya, Maisy,
Riley, and Jordan shook their heads in unison. It was nobody’s first time at
the bridesmaid rodeo.

“Excellent.” She
turned toward Sasha. “And how are you holding up?”

“I’m fine. Is
everything okay with Chris?”

When her Krav
Maga instructor’s boyfriend had offered to play the piano at the wedding, she’d
been so grateful—and eager to cross the item off her to-do list entirely—that
she’d left the choice of music entirely to his discretion. At the time,
Connelly had been shocked by her willingness to loosen her control freak,
vise-like grip and delegate the decision. Now, she worried it had been a
mistake.

Charlotte
smiled, a genuine, wide grin, and shook her head.

“Everything is
perfect. You’ll be so pleased.” She patted her silver bob back into place and
smoothed her bangs out of her eyes.

“Now, remember
ladies, should you need anything, anything at all—aspirin, water, magic tape
for a loose hem, a bandage for a blistered heel, a breath mint, a
prophylactic—I am the woman to see.” She lifted her large, macrame purse as
visual evidence that it contained anything they might need.

With the gaggle
of kids her two sisters-in-law had produced in true Irish Catholic speed, Sasha
somewhat doubted Riley was going to be able to help Jordan with the word.

The room
dissolved into fits of giggles. Valentina pursed her lips but said nothing.
Charlotte threw Sasha a wink and linked her arm through Valentina’s, gently
guiding her out of the room.

“Now, Mrs.
McCandless, let’s go see about that oceanfront massage I’ve taken the liberty
of scheduling for you tomorrow morning, shall we? You can meet the spa staff.”

With no cell phone, Sasha passed the
time waiting to start the rehearsal staring out at the pristine beach and,
beyond that, the orange sun hanging low over the water. The sun would set soon,
dipping below the glistening waves.

Will and his
wife, followed by the firm’s secretary, Caroline, and her husband came into
view, walking along the white stone path that led from the cliffs to the beach
below. The four clutched tropical cocktails, made with the syrup of local
fruits and—as Sasha had learned over the last few days—mixed with a generous
hand.

Maisy joined
Sasha at the window and slipped an arm around her waist.

“You aren’t looking
for an escape route, are ya’, sugar?”

Sasha turned
from the view and laughed.

“No, just
wishing I could join the Masters and Volmers down on the beach to watch instead
of sitting around, penned up, with nothing to do.”

“Patience,
Sasha. I hear it’s a virtue.” Maisy’s smile held a hint of relief, as though
she actually thought Sasha might be having second thoughts.

She’d have to
squelch that right away. “I just want to get the wedding part out of the way,
so we can get on with the
marriage
, you know?”

“Everybody
knows. Once Leo suggested this place, you were like a whirling dervish, pulling
the whole thing together in a blink.”

“That was mainly
Charlotte’s doing,” Sasha admitted. She’d called the resort in June, had spoken
to the septuagenarian wedding coordinator, and asked for the earliest possible
reception day.