Read A Mosaic of Stars: Short Stories From Other Worlds Online

A Mosaic of Stars: Short Stories From Other Worlds 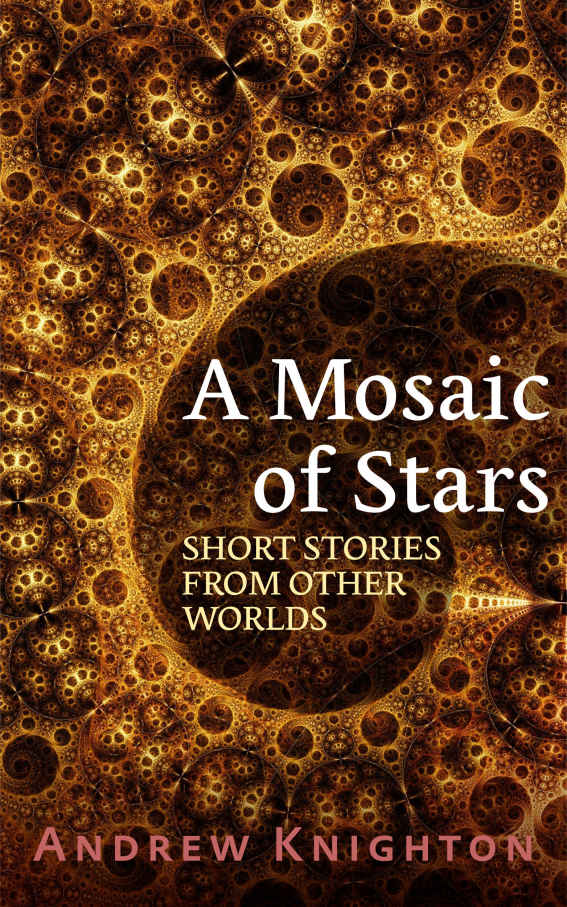 The God of This Hillside

The Making of Meredith Brown

Holes Through the World

A Pinch of Sorrow

A Matter of Skin

By Starvation or by the Sword

Not All Hands Tell the Time

A Flash of Power

The Clatter of Dishes

A Hard and Hollow Sound

A Railway to the Moon

As Cool As Elvis

Sunflowers in the Snow

The Price of Living

Davey in the Machine

Songs of a New World

Divided by a Shared Language

Short Stories From Other Worlds

Get a free short story every Friday, and updates on upcoming books, by
signing up to my mailing list
.

Grabbing hold of the sill, I heaved myself through an upper window in Lord Stavernley’s tower. It was a warm night, and Old Grob, the librarian, had left the shutters open to air the books. He was good at his job, but not as good as I was at mine.

Grob looked up as I emerged between the stacks.

“Hello, Alina.” His smile buried his eyes in wrinkles. “Did the guards let you in?”

“Not exactly.” Whispering a charm, I flung a handful of grave dust in his face. The air sparkled for a moment, and then he slumped across his desk. When he woke he wouldn’t even remember that I had been here. My debt to Mad Sal would be paid, my cover still intact, and I could finally settle down.

I left Grob’s lamp on the table. I knew the layout of the room blindfold, had practised crossing it that way while re-shelving tomes for him. I might not be a writer or engraver, but I was still an artist of sorts, plying my trade within the world of books.

“Who’s that?” One of the portraits of past librarians blinked, staring through the gloom at me. “What are you doing?”

His voice was rising, and if he kept talking the guards would hear. Around him, the other portraits were waking - every librarian in the history of the castle, except for those who had failed their lords. Those ones did not keep their heads, never mind being immortalised on canvas.

I pinned a small square of banshee skin to the frame. The incantation on it was crudely sketched, but good enough for now. The painted face froze. I pinned charms to the others for good measure, and then returned to the shelves.

Creeping to the back of the room, I approached the cage housing Stavernley’s special collection. The lock was simplicity itself to pick, and I knew exactly which tome I needed. It was heavy, the iron binding cold as I carried it back to the desk.

Grob snoring beside me, I slid a long knife from my sleeve, along with a bundle of papers to replace those Mad Sal wanted. If Grob was lucky then the difference might not be spotted until after he was gone, though the odds weren’t good.

Opening the book to the gathering I was after, I laid my knife carefully against the threads binding it in place. The art on the pages was beautiful. Even without the spells recorded there it would have been worth a fortune. No wonder both Sal and Lord Stavernley prized it enough to threaten violence over its possession.

I hesitated, glancing from mild mannered Old Grob to the book and then back again. One of the portraits twitched as my charms started to wear off.

Still I hesitated, looking from Grob to the book and then to that line of portraits, the absent faces as significant as the present ones. I took my knife from the binding, placed it there again, drew it back once more. At last I pressed against the strings until one of them gave way.

The snap of the string was like hearing a tiny heart break. Something inside me snapped in response.

I put away my knife, closed the book and returned it to its cage. As I reached the window I hesitated once more, contemplating the terrible things Sal did to those who failed her.

Never mind. I always left town in the end. This time it would just be a little sooner.

I took a moment to memorise Grob’s wrinkled and genial face, the replacement pages lying beside him - a memento of a close call he would never know he had. Then I slid from the window and out into the night.

Every day for a month, as she walked through the palace gardens, Lady Elana looked up at the high balcony where Prince Novak sat, his handsome face as pale and sorrowful as old bones. She had read the books of poetry he wrote before his mother’s death, and so knew that there was joy and beauty in him, such joy and beauty that it had captured her own heart. But she had come to court too late to meet the man with whose words she had fallen in love. Now he sat alone behind locked doors and his father’s guards, slumped in sorrow.

Elana was determined to change that.

It took her weeks to identify the brief moment each day when the guards did not watch the wall below the balcony. She waited another month for the perfect blue rose to emerge in the garden, just as it had in Novak’s poetry. At last her moment came.

She plucked the rose, grasped it between her teeth and scrambled up the ivy. Stone scraped her knuckles red raw, and thorns drew blood from her lips, but at last she reached the top and held out the flower to Prince Novak.

“I found beauty amid brambles.” She recited the first line of her favourite verse, and the smallest of smiles flickered at his mouth.

“What is this?” The King was furious as he stomped out onto the balcony. “I keep my son here to protect him from harlots like you, preying upon his weakness as you scrabble to become queen. I will have none of it!”

“Please.” Elana trembled as she bowed low before the King. “Please, I just want to make him happy. The flower made him smile. Surely that is worth something?”

The King looked at his son, and for a moment his expression softened.

It was only a moment.

“Any courtly lady can make a young man smile,” he growled. “It is what you are trained for. Make me smile, and then I will let you see him again.”

Every day for a month, Elena was allowed into the King’s presence and given one chance to make him smile. At first she sang songs and told jokes, but his expression remained stern. Then she tried stories of glory and heroism, which she had been told he loved in his youth, but still no smile. She brought bouquets of flowers, fine artworks, beautiful and exotic birds, but not a hint of happiness touched the King’s lips.

Determined to succeed, Elena learnt new skills. Every month for a year she would dedicate herself to a new entertainment, perfecting some display before bringing it before the King. She became an acrobat, an illusionist, a high wire ballerina. Courtiers were dazzled by the spectacle of her displays, but the King continued to glare.

At last came the day when Elena could do nothing more. Every muscle ached from endless training. All her money was gone, spent on experts and tutors. So many crafts filled her mind, ideas and information cramming up against each other, that she could barely sleep at night from keeping them all in.

She bowed low before the King, her last threadbare gown sweeping the floor.

“I have failed, your majesty,” she said. “I am penniless, and must now leave court. But if my example inspires another, and one day they make Novak happy, then every moment of this has been worthwhile.”

With all the dignity she could muster, she turned to walk away.

“Wait.” The King’s voice was soft.

Elena turned to see a tear rolling from the corner of his eye.

“It amazes me,” he said. “That you could care for my son so much that after all this you are happy just knowing that he is too.”

He waved to one of his guards.

“Take her to Prince Novak.” At last a smile appeared on the King’s face.

Every day for a month, Elena visited Prince Novak on his balcony. They read stories, admired the garden, and wrote poetry together. Slowly but surely, the Prince’s smile returned. It became fixed forever when, the very next year, they were wed.

I staggered through the broken gates into the great hall, the armoured weight of Elania almost dragging me to the ground. I was weary beyond belief, my arms aching from a battle that had lasted all through the night.

That weariness was nothing next to my terror at the sound of Elania’s broken, rasping breaths. She stumbled, her arm slipping from around my shoulders. I got her as far as the guards’ empty bench before she collapsed.

“We won.” She opened her eyes, streaks of purple and silver swirling as she smiled. “The city is safe. You’re safe.”

Trembling fingers brushed my cheek, the tips of her gauntlet cold on my skin.

“But you’re dying,” I said, looking around for any sign of help. The whole palace was deserted, every last servant gone to the walls. Those who still lived would be looking to their own wounds, or sleeping where they fell. “What can I do?”

I knew little of human healing, none of that of the elves. Why had she ever chosen such a dull creature as me?

Blood dripped from between the plates of her armour, each droplet glowing like sunlight. It fell upon the tiny black and blue tiles of the floor, gleaming against their darkness.

“Nothing, my love.” She cast off her gauntlet with a clang and took hold of my hand. Our intertwining fingers, which had always brought summer to my heart, now moved me to tears.

“I’ve stained the floor.” She looked down at the blood-spattered tiles. “Such a shame. It was a beautiful pattern, and-” She coughed, doubling over as more blood speckled her lips. “And elf blood will never come out.”

“You can’t do this,” I said. “You were meant to live for millennia. I’m the one who’s supposed to…”

“To desert me for death?” There was a mischievous twinkle in her eye. How could she be like this, even now? It made me love her more, a love that made the world more beautiful, and that made my pain even worse.

“I’m sorry,” I whispered. “I’m being selfish. I just… I never thought that I would have to go on without you. I don’t think that I can.”

I glanced at the sword by my side. I would wait until she was gone to fall upon it. I could manage the courage to last that long.

Her gaze followed mine and she shook her head.

“What we did today will never die,” she said. “Not as long as anyone remembers it. The same is true of our love. As long as one of us is here to treasure those feelings, it will never be gone.”