Read A Most Unconventional Match Online

A Most Unconventional Match 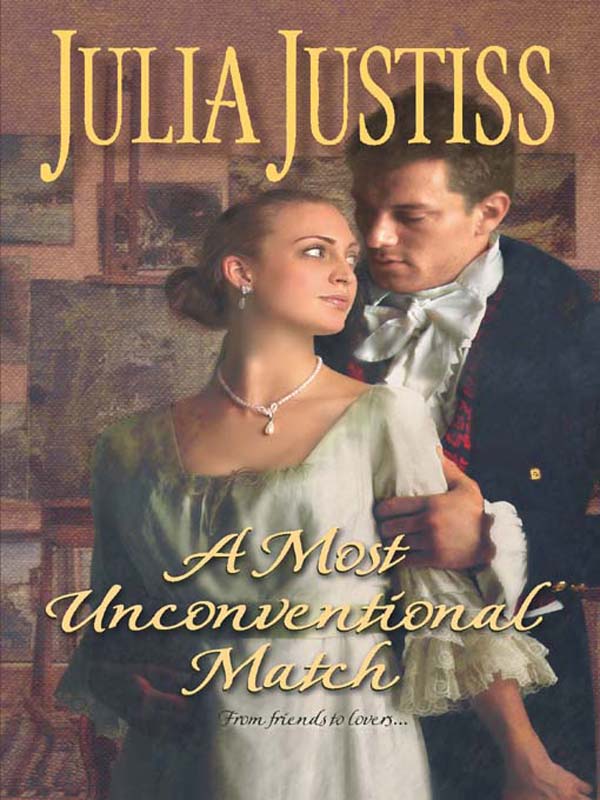 “I would be honored to have your
escort,” Elizabeth said softly, her blue
gaze catching his and holding it.

Hal's chest expanded until he wasn't sure he'd be able to grab a breath. Of course, Elizabeth was merely grateful for his help. But the very thought of escorting her, of walking into some public place with her hand on his armâ¦

Elizabeth Lowery beside him in a carriage, her rose scent wrapping around his head. Her golden curls brushing his shoulder, the warmth of her body radiating toward him, her lips, the delicious curves of her body but inches awayâ¦The rush of images made him dizzy with anticipation and desire.

He tried to beat his thoughts back into order. She saw him not as a man but as someone safe and companionable. He mustn't make of it any more than that.

“With characters you care about, clever banter, a roguish hero and a captivating heroine, Justiss has written a charming and sensual love story.”

“Justiss rivals Georgette Heyer in the beloved
The Grand Sophy
(1972) by creating a riveting young woman of character and good humorâ¦The horrific nature of Helena's childhood adds complexity and depth to this historical romance, and unexpected plot twists and layers also increase the reader's enjoyment.”

“With its intelligent, compelling characters, this is a very well-written, emotional and intensely charged read.”

“Julia Justiss has a knack for conveying emotional intensity and longing.”

â
All About Romance

“Another entertaining, uniquely plotted Regency-era novelâ¦top-notch writing and a perfect ending make this one easy to recommend.”

“With this exceptional Regency-era romance, Justiss adds another fine feather to her writing cap.”

He knows that escorting the haughty Grand Duchess
of Maubourg to England will not be an easy task.

But Jack Ryder, spy and adventurer, believes he is
more than capable of managing Her Serene Highness.

Join Louise Allen as she explores tangled love lives in her
compelling miniseries THOSE SCANDALOUS RAVENHURSTS!

Juniper Barns has sought a secluded life as a lumber-camp
sheriff to escape the ghosts of his past. He doesn't need
a woman sneaking into camp and causing turmoilâ¦.

Troye de Valois, one of the king's own elite guard, has long lived
in Eleanor's heart and dreams. Dreams that are shattered when he reveals his anger at their forced marriage,
and the emotions she is reawakening in himâ¦.

Drama and passion build in this stirring Medieval tale.

L
eaning one broad shoulder against the wall, Hal Waterman exchanged an amused glance with Sir Edward Austen Greeves as they watched the bridegroom pacing in front of the hearth. âWearing out the carpet, Nicky,' Hal pointed out. âGive the bride's family a distaste of you. Best get the ring on her finger first.'

Nicholas Stanhope, Marquess of Englemere and Hal's best friend since their Eton days, sent him an irritated look. âI can't imagine what's taking so long. The priest arrived half an hour ago.' Halting before a side mirror, he straightened the white rose in his buttonhole and tugged on his cravat.

âAdjust that once more and you're going to ruin it,' Ned said. âI expect the ladies will be here shortly. Patience, my man! Every bride wants to look beautiful on her wedding day, even if she's being married by special licence in a parlour instead of in church after a calling of the banns.'

Nicholas swung his gaze around to glare at Ned. âDon't you dare imply there's anything havey-cavey about this! You both knowâ'

âWe do,' Hal interrupted. âMortgage foreclosure and all that. Had to rescue her. Great lady, Sarah. Good choice.' He nodded approvingly.

âMust be eagerness for the wedding night that makes you so testy,' Ned said. âYou know we fully support your marrying Sarah and understand the necessity to do so immediately. And her family's parlour might not be a church, but it's just as handsomely appointed.'

Ned gestured around the room, indicating the side tables covered with lace cloths surmounted by silver candelabra, the large vases filled with greenery and white roses set beside the rows of chairs facing the fireplace, the mantel where a cross flanked by candles and more rose sprays created an improvised altar. âThe ladies have outdone themselves.'

Though he'd resumed his nervous pacing, the tightness in Nicholas's face loosened. âI want this day to be beautifulâfor Sarah.'

âYour mama still after you with her latest heiress in tow?' Ned asked. âAs much as she disparages you, you'd think she wouldn't be so eager to try to drag you into the parson's mousetrap.'

âWants to “improve” me,' Hal said glumly. âEscaped her house, live in rooms, can't work on me. Thinks a wife could.'

Nicholas halted long enough to thump Hal on the shoulder. âAs if you needed improvement! You're already the most stalwart companion a man could want.'

âHear, hear,' Ned seconded and then shook his head.
âWomen.'

Giving his loyal friends a grateful smile, Hal gazed up at the altar. If he were forced to marry, Nicky's soon-to-be bride would be almost his ideal choice, he thought. Lovely but not terrifyingly beautiful, competent, accomplished and kind, Sarah Wellingford never made him feel clumsy, tongue-tied and thick-witted the way the sharp-eyed, disdainful Diamonds of the
ton
his mother kept trying to foist on him did.

The way his beautiful, self-absorbed, society leader of a mother still did.

Since he had no intention, if and when he ever married, of wedding the sort of woman his mother preferred, he supposed he was fated to remain a disappointment to her. He shrugged off the dull ache produced by that old hurt.

âAh, here they come at last!' Ned exclaimed as the parlour door opened.

The three men turned to watch as, led by the priest, the bridal party entered. First came the bride's sisters, all adorned in white gowns trimmed with gold ribbon and cream rosebuds.

Meredyth, Cecily, Emma, FaithâHal silently counted them off as they proceeded, trying to match faces to the names Nicky had given him. He'd just caught a glimpse of Nicky's Sarah, resplendent in a gown of shimmering gold that made her silver-blonde hair glow, when the last sister in line turned toward him after easing the bride's long skirt through the door.

Elizabeth, Hal thought, before his breath whooshed out and his brain stuttered to a halt.

She was an angel come to earth. Nothing else could explain such perfection, the beauty radiating from her so intensely, as if she were lit from within, that Hal could feel the warmth of it all the way across the room.

His stunned senses took in the pure spun gold of her hair, the pale coral of her cheeks, the rose-petal-soft look of her skin, the pink bow of a mouth with its full lower lip. A slightly pointed chin imbued her face with character, saved it from a mere oval's bland symmetry.

And her eyesâblue as the summer waves of the lake on his country estateâimpelled him to approach, as if he might discover the purpose of his life mirrored in the depths of those indigo pools.

An angel, his numbed wits repeated, or the reincarnation of the Botticelli Venus he'd seen in his well-travelled tutor's pastel sketches.

Without conscious volition he walked toward her. She turned to him and smiled. A shock raced along his nerves from the top of his head to the soles of his feet.

She was the loveliest thing he'd ever beheld. Flawless. More beautiful even than his mother. His senses clamoured to touch her, taste her.

The realisation halted him in mid-stride.

Lord in heaven, what was he thinking?

âHal, you escort Elizabeth,' Ned murmured at his shoulder.

Escort her? Panic filled him and a cold sweat broke out on his brow, dampened his fingers. âCan't!' he replied in a strangled voice. Turning on his heel, he hurriedly paced to the furthest corner of the room.