A Philosophical Investigation: A Novel 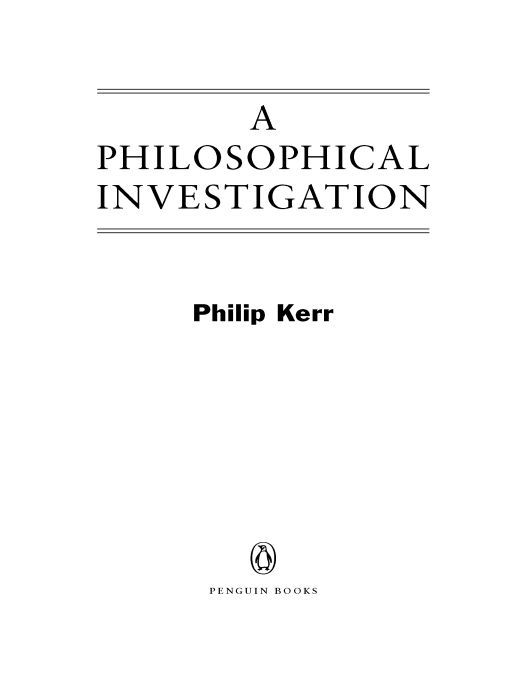 Table of Contents
ABOUT THE AUTHOR
Title Page
Dedication
Copyright Page
Chapter 1
Chapter 2
Chapter 3
Chapter 4
Chapter 5
Chapter 6
Chapter 7
Chapter 8
Chapter 9
Chapter 10
Chapter 11
Chapter 12
Chapter 13
Chapter 14
Chapter 15
Chapter 16
Chapter 17
Chapter 18
Chapter 19
Praise for Philip Kerr and
A Philosophical Investigation
“A stunning novel... convincing... frightening ... Philip Kerr puts an end to the myth that all the best crime fiction is written by women.”
— Ruth Rendell, author of
Not
in
the Flesh
“One of the more imaginative thrillers in quite a while. ... Combines teleological speculations with nitty-gritty futuristic police work.”
—
The Wall Street Journal
“The brainiest thriller to come along in years ... raising questions about knowledge, proof, and reality in unnervingly dramatic contexts.”
—
Kirkus Reviews
“Terrific ... A nifty novel, to describe and dream about.”
— John Leonard, National Public Radio
“Set in an early twenty-first-century London of Orwellian squalor, this is a crime novel with a twist.... An unusual and intellectually stimulating thriller.”
—
Library Journal
“Best described as a suspense writer’s suspense novel — an impressive tour de force that is likely to be regarded as a classic among the cognoscenti.”
—
The Wichita Eagle
“Philip Kerr’s ingenuity is unquestionable.... This is probably the crime story of the year for computer buffs, amateur philosophers, and would-be time travelers.”
—
London Review of Books
“Clever, tightly plotted, well written and full of good jokes ... the sort of crime writing in which ideas really dazzle and move the reader.”
—
The Times Literary Supplement
(London)
ABOUT THE AUTHOR
Philip Kerr is the author of many novels, including six featuring Bernie Gunther
— If
the
Dead Rise Not, A Quiet Flame, The One from the Other,
and the Berlin Noir trilogy
(March Violets, The Pale Criminal,
and
A German Requiem)
— and several bestselling children’s books. He lives in London and Cornwall with his family.

FOR MORE FROM PHILIP KERR, LOOK FOR THE

A Quiet Flame
It’s 1950 and Bernie Gunther is on the run. Falsely accused of being a war criminal, he has booked passage to Buenos Aires. But once there he finds himself drawn into a horror story that rivals everything he has tried so hard to leave behind, with crimes that stretch back to Berlin in 1932. It’s not so far-fetched that the cases might be linked: after all, the scum of the earth has been washing up on Argentine shores — state-licensed murderers and torturers — so why couldn’t a serial killer be among them?
ISBN 978-0-14-311648-6
The One from the Other
Germany, 1949. Berlin and Vienna have become too dangerous for Bernie Gunther and he has moved on to Munich to reestablish himself there as a private eye, cleaning up the Nazi backgrounds of well-to-do locals and helping fugitive war criminals flee abroad. While the work fills him with disgust, it’s a simple job until the wife of an infamous war criminal hires Gunther to investigate her husband’s disappearance. In postwar Germany, nothing is simple — nothing is what it appears to be.
ISBN 978-0-14-311229-7
Berlin Noir
March Violets; The Pale Criminal; A German Requiem
This fast-paced volume includes all three books of Philip Kerr’s classic Berlin Noir Trilogy, featuring ex-policeman Bernie Gunther. With every case he tackles, Gunther finds himself sucked further into the grisly excesses of 1930s Nazi subculture, as he uncovers a legacy that makes the wartime atrocities look lily-white in comparison.
ISBN 978-0-14-023170-0
ALSO AVAILABLE FROM PENGUIN
Hitler’s Peace
Autumn 1943, Tehran: Since Stalingrad, Hitler has known that Germany cannot win the war. Realizing that the unconditional surrender FDR has demanded will leave Germany in ruins, Hitler has put out peace feelers. (Unbeknownst to him, so has Himmler, who is ready to stage a coup in order to reach an accord.) At the center of this high-stakes game of double-dealing is Willard Mayer, an OSS operative who has been chosen by FDR to serve as his envoy and whose beliefs will be put to the ultimate test.
ISBN 978-0-14-303695-1
T
he best that I could write would never be more than philosophical remarks; my thoughts were soon crippled if I tried to force them on in any single direction against their natural inclination. - And this was, of course, connected with the very nature of the investigation. For this compels us to travel over a wide field of thought criss-cross in every direction.
Ludwig Wittgenstein:
Philosophical Investigations
(Translated by G. E. M. Anscombe, Basil Blackwell 1958)
There will be time to murder and create,
And time for all the works and days of hands
That lift and drop a question on your plate...
T. S. Eliot:
The Love Song of J. Alfred Prufrock
1
‘T
HE UNFORTUNATE VICTIM, twenty-five-year-old Mary Woolnoth, was found naked in the basement of the offices of the Mylae Shipping Company in Jermyn Street, where she had worked for three years as a receptionist, her face beaten in with a claw hammer.
‘So severe was the beating that her lower jaw was broken in six places, and almost all of her porcelain-capped teeth pounded loose. Disintegrated fragments of the woman’s skull and brain tissue were scattered in the neighbourhood to an extent that was consistent with their newly-acquired momentum. Having recovered the murder weapon it is possible to construct an equation which gives us the kinetic energy of the blow: this is found by multiplying the mass of the weapon by the square of the velocity and dividing the result by two. Using the kinetic energy of each hammer blow, the cranial depth of each fracture, and the angle of depression, the computer has calculated that the killer stands 1.82 metres tall and weighs approximately 85.72 kilograms.
‘The poor woman’s red silk suspender belt was tied tight around her neck although by this stage she was already dead. A Simpson’s store carrier bag was later pulled over the victim’s head covering her ruined features from view. Possibly this took place prior to intercourse.
‘Using a Christian Dior Crimson Lake lipstick from the victim’s handbag, the killer wrote some four-letter abuse onto her bare thighs and stomach. Immediately above the pubic line was written the word “FUCK”, while on the underside of her thighs and buttocks was written the word “SHIT”. Across each breast was written the word “TIT”. Last of all the killer drew a happy smiling face onto the white plastic carrier. I say “last”, because there was evidence of the lipstick having crumbled more during this drawing.
‘The unhappy victim’s vagina contained traces of a latex-based spermicidal compound consistent with the killer wearing a condom prior to intercourse. He was no doubt mindful of the need to avoid DNA profiling. The said spermicidal compound is of a type most used by the RIMFLY brand of prophylactic, commonly used by homosexuals because of its greater strength. In past years we have also found that this is also the average rapist’s favourite condom for the same reason.’
Jake opened the file on the table in front of her to examine the photographs. Before looking at them she took a deep breath that she did her best to conceal from the four men, three of whom were detectives, seated around the conference table with her. Her small sham of equanimity was unnecessary, as one of the other detectives did not bother to examine his file of photographs at all. Jake thought this was unjust. A man could always say something about how it was too close to lunch to spoil a good appetite and nobody would mind. There were, however, no such easy excuses for her. Jake felt quite certain that if she didn’t look at the photographs now they would say it was because she was a woman. No matter that she had already seen the body when first it had been found. With the exception of the detective who declined to look at the pictures, they had all seen the body.
ADS
15.4Mb size Format: txt, pdf, ePub