Read A Place in Time Online 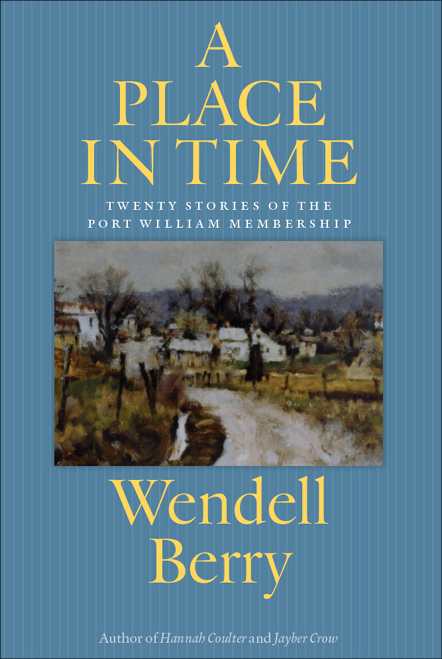 A Place in Time: Twenty Stories of the Port William Membership
Copyright Â© 2012 by Wendell Berry

The cover painting “Springdale” by Harlan Hubbard is used courtesy of Dr. Robert and Charlotte Candida, with thanks to Meg Shaw.

In memory of James Baker Hall,
who was the first friend
of the fiction of Port William

Down in the Valley Where the Green Grass Grows (1930)

In my work I always need help. I have often asked for help, and as often have received it. But being helped, for me, has not been merely a necessity. It is half the pleasure of doing the work.

This book's dedication to James Baker Hall acknowledges a debt that has been accumulating interest for nearly sixty years. My late dear friend Don Wallis read most of these stories and wrote me letters about them that not only improved my writing but were happy events in themselves. Tanya Berry listened to every story in first draft, made the first typescripts, and as always helped me along as critic, editor, and consultant. David Charlton typed the computer versions of every story, and kindly endured my second thoughts, revisions, and additions for what must have seemed to him a time much longer than it actually was. When I became unsure about some technical matters in “The Dark Country” and “A New Day,” David Kline and Jason Rutledge led me to solid ground. And I am grateful indeed for this further step in my long collaboration with Jack Shoemaker of Counterpoint, and with David Bullen.

I give my thanks also to the editors of the magazines in which the stories were first published or reprinted: “The Girl in the Window,” “Fly Away, Breath,” “Andy Catlett: Early Education,” “Drouth,” and “Not a Tear,” in the
Threepenny Review;
“Down in the Valley Where the Green Grass Grows,” “A Burden,” and “Who Dreamt This Dream?” in the
Oxford American;
“Burley Coulter's Fortunate Fall,” “The Dark Country,” “A New
Day,” “Mike,” and “An Empty Jacket” in the
Sewanee Review
; “A Desirable Woman” and “A Place in Time” in the
Hudson Review;
“Misery” in
Shenandoah;
“Stand By Me” and “Sold” in the
Atlantic;
“The Requirement” in
Harper's;
and “At Home” in
Orion.
“Drouth” also appeared in
Farming
. “A New Day” and “Down in the Valley Where the Green Grass Grows” also appeared in
The Draft Horse Journal.

There is as much in that little space within the heart, as there is in the whole world outside. . . .

The Ten Principal Upanishads,
Put into English by Shree Purohit
SwÄmi and W. B. Yeats

They might as well all have been the same bunch, although they weren't. Sometimes there would be enough gray uniforms or uniform pieces among them to permit them to be identified (perhaps) as Rebels. Sometimes they would be more formally recognizable as Yankees because they would all be dressed in uniforms that would be blue. Sometimes, because of their unlikeness to one another and to any living thing ever before seen in Port William, you couldn't tell who they were. Whoever they were, the town shut itself against them like a terrapin closing its shell. From the yards and porches and storefronts along the single street, people withdrew behind doors. People who had ridden into town in a wagon or on horseback got themselves and their animals out of sight, if they could. Otherwise, they were apt to have to get away on foot, their mules or horses “requisitioned,” and if the younger men could get away at all before being arrested or “recruited.”

The Yankees would be looking for persons disloyal to the Union, a category not clearly defined, or for revenge against perpetrators of disloyal acts, which also were not well-defined or perhaps even definable. The Rebels would be on the lookout for recruits. The others, the self-described irregulars or guerillas, would be actuated, as like as not, by some local grudge going back a long time before the war. All of them, always, were looking for any livestock that could be ridden, worked, or eaten,
anything
that could be eaten, anything usable as a weapon, anything portable that
was worth carrying away, any opportunity for amusing themselves by any of the cruelties available to those who had abjured, seemingly forever, the laws of kinship and friendship and neighborhood.

The Scottish Witch by Cathy Maxwell
Looking for Laura by Judith Arnold
Stranger At My Door (A Murder In Texas) by Mari Manning
Hollywood Confessions by Gemma Halliday
Take This Cup by Bodie, Brock Thoene
Adrian by Celia Jade
Best European Fiction 2013 by Unknown
Poacher Peril by J. Burchett
Last Another Day by Higgins,Baileigh
The Man I Love by Suanne Laqueur