Read A Posse of Princesses Online

A Posse of Princesses 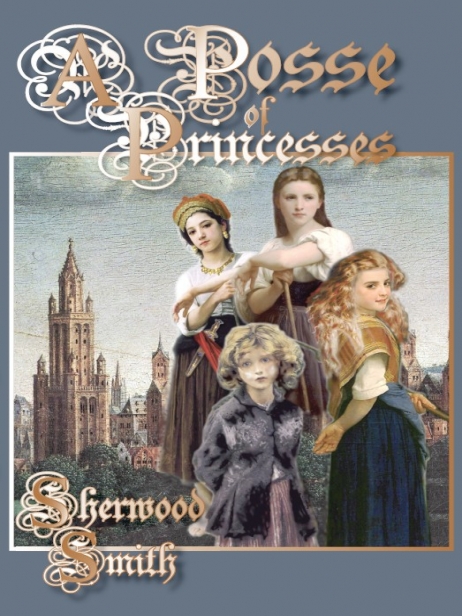 A POSSE OF PRINCESSES
Sherwood Smith

This book is a work of fiction. All characters,
names, locations, and events portrayed in this book are fictional
or used in an imaginary manner to entertain, and any resemblance to
any real people, situations, or incidents is purely
coincidental.

Other YA Books by Sherwood Smith

Over the Sea: CJ’s First Notebook

A Stranger to Command (prequel to Crown
Duel)

Wren to the Rescue

A Posse of Princesses

This map can be viewed online
here 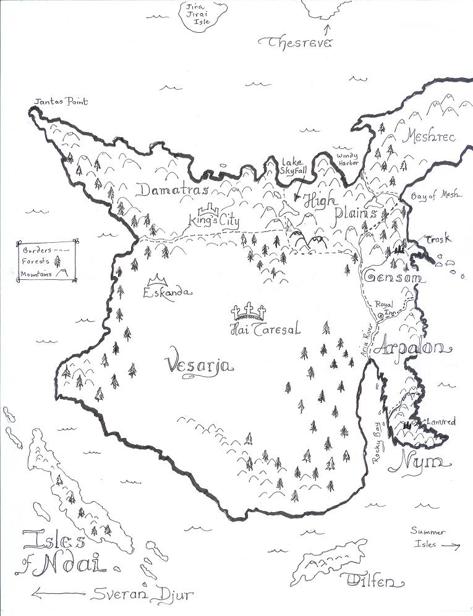 to my beta readers at Athanarel,

for her generous help in proofreading

From the tower lookout in the royal
castle—highest tower in all the kingdom of Nym—Princess Rhis peered
down through the misting rain at a messenger on the main road.

This rider slumped in the saddle of the
long-legged lowlands race-horse plodding up the steep road,
occasionally hidden by tall stands of deep green fir. The messenger
had to be from the lowlands. Anyone raised in Nym’s mountains knew
that the only animal for the steep roads was a pony. Their sturdy
bodies and short legs fared better on steep slopes.

The rider’s cloak was crimson, a bright
splash of color even in the gloom of a rainy afternoon. None of
Nym’s royal messengers wore crimson cloaks. This one must be an
equerry from the Queen of faraway Vesarja. Rhis turned away in
disappointment and resumed pacing around the little room.

Once, many years ago, the old tower had been
a lookout for Nym’s warriors, no longer necessary since the kingdom
had established magical protection. Now the small, stone tower room
had become Rhis’s private retreat.

Her parents considered themselves too elderly
to climb all those stairs any more; her older brother, Crown Prince
Gavan, was too busy, as was her older sister, Princess Sidal. And
Gavan’s wife, Princess Elda, was too stout—even if she’d approved
of frivolities such as spending time in tower rooms, which she
didn’t. Something she mentioned rather often.

Rhis loved the lookout. It was cozy, and had
a nice fireplace (with a magical firestick in it that burned evenly
all winter long), a comfortable cushioned chair, a desk, a small
case containing all her favorite books, and a tiranthe—the
twenty-four-stringed instrument that Elda insisted only lowly
minstrels played. Here Rhis could practice and not disturb, or
disgust, anyone. Here she could sit and read and dream and watch
the ever-changing weather and seasons over the tiny mountain
kingdom. She could also write wonderful ballads.

At least . . . she hoped they were wonderful.
Would be, some day. Maybe.

She stopped pacing and frowned down at the
paper on the desk, close-written with many, many scribblings. She
loved music, and stories, and ballads—especially the ones about
people in history who had gone through terrible adventures but had
succeeded in finding their True Love.

When she’d begun her first ballad, it had
seemed easy. All she had to do was picture a forlorn princess, one
who was tall with brown hair—someone a lot like herself. Only
instead of having a cozy retreat, this princess was locked up in a
tower room, she wasn’t quite sure why yet, but for some horrific
reason, which would require her to escape secretly down all 538
steps, slip out into the treacherous snows of winter, and
away—meeting a prince along the road.

Rhis frowned. She knew what kind of prince
the princess had to meet. He had to be brave, and good at
overcoming vast numbers of evil minions, but he also had to be
kind. He absolutely must like music—especially ballads—but he had
to be a good dancer. He had to look like. . . .

That was the part that she always got stuck
at. Rhis dropped onto her chair and reread her verses about the
mysterious prince. Every line began with “The best” or “The
greatest” or “The finest”—he had the darkest hair, the bluest eyes,
he was the best dancer, but still, somehow, he seemed so . . . um,
boring.

With a heavy sigh she dipped her pen and
struck out the latest words that just a while ago had seemed so
wonderful. What were
the bluest eyes
, anyway? Were eyes the
silver-blue of the morning sky bluer than the dark blue of
evening?

Blue eyes were stupid anyway. Everyone in
ballads either had eyes of emerald or sapphire or amber. How about
something
really
unusual, like red eyes? Or yellow and
purple stripe? But would those be handsome? Rhis frowned and tried
to picture a fellow puckering up for a kiss . . . handsome lips,
handsome nose . . . and right above, a pair of yellow and purple
striped eyes? No. Well, how about red? But what kind of hair would
look handsome with red eyes? Not red, certainly, though her
favorite color was ‘hair of flame’, which sounded more romantic
than anything. But crimson eyes and hair of flame? He’d look like a
measle.

Not blond, either. She didn’t want a blond
prince, for the people of Damatras far to the north were supposed
to be mostly light haired and paler than normal people, and
everyone knew they lived to make war.

A tinkling sound interrupted her musing. It
was the summons bell that her mother had magically rigged so that
the servants wouldn’t have to climb 538 tower stairs just to remind
Rhis not to be late for dinner.

The summons couldn’t possible be about the
messenger. No one ever sent her messages, except for dull letters
from Elda’s younger sister, Princess Shera, and those always came
with the green-cloaked messengers from the kingdom of Gensam.

Rhis wrinkled her nose. It could only mean
that Elda wanted her—and always for some dreary task, or lesson, or
duty, and if she dawdled too long she also incurred a lecture given
in that sharp, annoyed tone of voice that never failed to send
servants whisking about their business, and made Rhis feel two
years old.

Rhis’s feet knew all 538 of the worn tower
stairs. She skipped down and dashed onto the landing. A glimpse of
pale blue caused her to veer, and she narrowly missed running down
Sidal, who tottered, struggling with a stack of books in her
arms.

Rhis reached up to steady her sister’s pile.
“I’m sorry,” she said contritely.

Sidal recovered her balance, and peered over
the topmost book. “A slower pace, perhaps?”

Rhis grimaced. Elda was forever lecturing her
on always using a sedate step, as a princess ought. “I will,” she
promised. “But I was in a hurry because someone rang the bell.” She
looked around for one of Elda’s maids.

Sidal smiled. “I did. Papa just received a
letter from Vesarja. It seems that Queen Briath Arvanosas has
invited you to attend the ceremonies arranged for Prince Lios, who
is officially being appointed Crown Prince.”

Sidal tipped her head in the other direction.
“They are in there discussing it now.”

“I think,” Sidal said in a quiet voice, her
eyes just slightly crinkled, “you ought to go in and hear what they
have to say.”

Rhis whirled around. Sidal was like Mama. She
never raised her voice, or said anything unkind, but when either of
them dropped a hint, it was always to the purpose.

Rhis knew at once what Sidal was hinting at:
Elda was in the audience room.

Despite her promise to be more sedate, Rhis
fled down the carpeted hall, her pearl-braided hair thumping her
back at every step. She slowed at the corner just before the
audience chamber, took in a deep breath, and with proper deportment
walked around the corner.

A waiting servant—Ama, mother to the upstairs
maid—saw her, bowed, reached to open the door, then paused. She
pointed in silence over one of Rhis’s ears, and Rhis clapped her
hands to her head. A strand of hair floated loose. How Elda would
glower!

“Thank you.” She mouthed the words as she
tucked the hair back.

Ama smiled just a little, and opened the
door.

“. . . and she has, despite all my efforts,
no better sense of duty than she had when she was five years
old.”

The audience chamber was not the most
imposing room in the castle, but it was the most comfortable. It
had rosewood furnishings and gilt lamps and the stone walls were
covered by colorful tapestries. The king did most of his work
there, often joined by Rhis’s mother, when she could.

King Armad was seated in his great carved
chair, a fine table loaded with neat stacks of paper at his right
hand. At his left side, in an equally great chair, sat the queen, a
book on her lap, her pen busy on a writing board. She smiled at
Rhis then returned to her work.

“Is there nothing you can attest to in my
daughter’s favor?” the queen said in her calm voice. Rhis felt her
face go hot. She was reassured to see the humor narrowing her
mother’s wide-set gray eyes, though her mouth was serious. “You
have had the training of her for ten years.”

Elda flushed, her round cheeks looking as red
as Rhis’s felt. “I have tried my very best,” she said. “What she
does well is what she wants to do well—singing, dancing, and
reading histories. No one dances better, but a great kingdom like
Vesarja will require more of a future queen than dancing, or
knowledge of which clans fought which back in the dark days, before
Nym became civilized!”

“This is true,” the king said.

Elda added, with her chin lifted, “As for
what matters most, my own daughter—scarcely ten years old—knows her
map better, and the rates of exchange, and can recite almost half
the Common Laws. If Rhis knows twelve of them, it would surprise
me.”

The king was still stroking his beard. “But
your daughter knows that she will one day rule Nym, after my son.
Is Rhis’s character bad? Or her disposition?”

Rhis bit her lip. She longed to point out
that Elda’s disposition was none too amiable—and she’d married a
prince. But she stayed silent, fuming to herself.

Elda gave one of her annoyed sighs, short and
sharp. “Her habits are lazy. She would rather loll about in her
tower room, piddling with her song books, than apply herself to
appropriate studies. Her disposition is not bad, for she does not
argue or stamp or shout. She simply disappears when she does not
agree with what she ought to be doing.”

The king looked up at Rhis. “Is this summary
true, child?”

Rhis gulped. She wanted so badly to shout
that Elda was not being fair. Rhis was
not
lazy—she kept
busy all the day long. She simply didn’t see the reason to study
those dull laws and tables, since she wasn’t going to rule.

Yet Papa had not asked if Elda’s words were
fair. Only if they were true.

“Yes, Papa,” she said in a subdued voice.

Her father stroked his long silver-white
beard with one hand, and lifted the other toward Queen Hailen.

The queen said, “We will discuss it
further.”

Deception at Dark Hall (The Briony Martin Mystery Series) by Coverstone, Stacey
When in Rome by Ngaio Marsh
Stolen (Book One) (An Alpha Billionaire Romance) by Ella London
The Boy Who Knew Me When (From Boys to men Trilogy) by Bostick, J.L.
Poppy and Prince by Kelly McKain
Bear Bait (9781101611548) by Beason, Pamela
Sister Freaks by Rebecca St. James
Friendship Bread by Darien Gee
The Story of the Chosen People (Yesterday's Classics) by Guerber, H. A.
Stonebound: Shifters Forever Worlds (Skeleton Key) by Elle Thorne, Skeleton Key