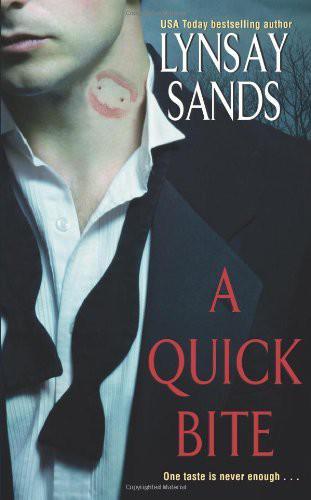 For David,
for all the coffee and kisses.

Greg stared at the closed door. He couldn’t believe that…

“I know you’re probably mad as hell about being here,…

It was barely noon when Lissianna woke up. She hadn’t…

Greg was silent and tense as they snuck him through…

Greg hung up the phone and sat back on the…

It was the click of the door that woke him.

Lissianna was sleepy and not at all interested in waking…

Greg was relieved to see Lissianna...until he noted…

Greg had brought his knee up and shifted sideways in…

“Thank you, Debbie. I really appreciate this,” Lissianna said sincerely…

It was midnight and Greg was still awake, agonizing over…

“Well that tears it. I haven’t got enough blood here…

Greg’s sleep was plagued by nightmares. He floated in a…

“So you never told me... What happened?”

“Bob.” Lissianna peered at the man with surprise.

Other Books by Lynsay Sands

“Uh-huh.” Standing, Greg Hewitt caught the phone receiver in the crook between his shoulder and neck, holding it in place with his chin as he began to clean up his desk in preparation for leaving the office.

Anne’s voice had taken on a wheedling tone, which was always a bad sign. Sighing inwardly, he shook his head as his sister rattled on, telling him what she had planned for the meal and so on, all in an effort to convince him to attend. He noticed she wasn’t mentioning who else was to be at this little dinner, but suspected he already knew. Greg had no doubt it would be Anne, her husband John, and yet another single female friend she hoped to hook up with her still-single older brother.

Greg paused and caught the phone in hand. He’d obviously missed something. “I’m sorry, what was that?”

“So, what time can you get here tomorrow?”

“I won’t be coming.” Before she could whine, he quickly
added, “I can’t. I’ll be out of the country tomorrow.”

“What?” There was a pause, then a suspicious, “Why? Where are you going?”

“Mexico. I’m going on vacation. That’s why I called you in the first place. I fly out first thing in the morning for Cancún.” Knowing he’d just set her aback, Greg allowed a smile to tug at his lips as he juggled the phone around to don the suit jacket he’d discarded earlier in the day.

“Mexico?” Anne said after a long pause. “A vacation?”

Greg couldn’t decide if her bewilderment was amusing or just a sad commentary on his life to date. This was the first vacation he’d taken since starting his psychology practice eight years ago. Actually, he hadn’t gone on vacation since starting university. He was a typical workaholic, driven to succeed and willing to put in the hours to do so. It didn’t leave much time for a social life. This vacation was long overdue.

“Listen, I have to get going. I’ll send you a postcard from Mexico. Bye.” Greg hung up before she could say anything to stop him, then grabbed his briefcase and quickly escaped the office. He wasn’t surprised to hear the phone start ringing as he locked the office door, Anne was the persistent sort. Smiling faintly, he ignored it and pocketed his keys as he started down the hall to the elevator.

Dr. Gregory Hewitt was now officially on vacation, and the knowledge made him relax more with every step away from his office. He was actually whistling softly as he boarded the elevator and turned to push the button marked P3. The whistle died, however, and Greg reached instinctively toward the panel, his eyes searching for the
HOLD
button to keep the doors open when he realized a woman was hurrying toward the closing doors. He
needn’t have bothered; she was quick on her feet and managed to slip through just before the doors closed.

Greg let his hand drop away from the panel and stepped politely out of the way so she could select the floor she wanted. He gave her a curious once-over as she moved in front of him, idly wondering where the woman had come from. The hall had been empty when he’d traversed it, and he hadn’t heard a door open or close, but then he’d been distracted with thoughts of his coming vacation. There were several offices on the floor besides his own, and she could be from any of them; but he was sure he’d never seen her before.

Greg had barely glimpsed her face as she’d boarded the elevator, and most of her features were a vague blur in his memory, but her eyes had been an attention-grabbing silver-blue. Unusual and beautiful, they were probably the result of colored contacts, he thought, and immediately lost any interest in her. Greg could appreciate beautiful women, and had no problem with them making the best of their appearance, but when they moved on to this level of artifice to try to attract attention, he tended to be turned off.

Shrugging her out of his thoughts, he relaxed back against the elevator wall, his mind immediately turning to his coming trip. Greg had planned a lot of outings; he’d never been anywhere like Mexico before and wanted to enjoy all there was to do. Along with the usual lounging on the beach, he hoped to get in some parasailing, snorkeling, and maybe go on one of those boat rides where you got to feed the dolphins.

He also hoped to fit in a trip to the Museum Casa Maya, an ecological park with a reproduction of how the Mayans lived centuries ago and walking paths where
you could see the local animals. Then there was the night life. If he had the energy after his active days, Greg might just hit the dance bars like the Coco Bongo or the Bulldog café where half-naked people gyrated to deafening music.

The elevator’s cheerful
ding
drew Greg’s thoughts from half-naked dancing women to the panel above the doors. P3 was lit up; parking level three. His floor.

Nodding politely to his companion, he stepped off the elevator and started through the large, nearly empty parking garage. With half-naked women still dancing on the periphery of his mind, it took Greg a minute to notice the sound of footsteps behind him. He almost glanced over his shoulder to see who it was, then let the matter go. The sound was the hollow
tap tap
of high heels on concrete; sharp and quick and echoing loudly in the nearly empty space. The brunette was obviously also parked on this floor.

His gaze moved absently over the open space toward where his car should be, but got caught on one of the supporting beams as he passed. The large black P1 painted on the concrete beam made him slow in confusion. Parking levels 1 and 2 were reserved for visitors to the various offices and businesses in the building. He was parked on P3 and had been sure the elevator panel light had read P3 when he’d looked…but it appeared he’d been wrong. Stopping, he started to turn back the way he’d come.

This is the right floor. There is the car ahead.

“Yes, of course,” Greg murmured, and continued forward. He strode up to the lone vehicle.

It wasn’t until he opened the trunk that the thought broke through his mind that the little red sports car
wasn’t
his. He drove a dark blue BMW. But as quickly as that
thought—with its accompanying alarm—claimed him, it blew away like fog under the influence of a breeze.

Relaxing, Greg set his briefcase inside the trunk, climbed in after it, arranged himself in the small space, then pulled the trunk closed.

“Umm, gee, thanks, Bob.” Lissianna Argeneau peered around the dark parking lot they were crossing, relieved to see they were alone. “But do you think you could get your hand off my ass?”

“What?” She glanced up into his handsome face with confusion.

“My name is Dwayne,” he explained with a grin.

“I thought you liked me.” His hand stayed firmly planted on her left butt cheek, squeezing in an altogether-too-friendly manner.

Resisting the urge to club him over the head and drag him into the bushes like the Neanderthal he was, she forced a smile. “I do, but let’s wait till we get to your car to—”

Lissianna stopped walking to peer up into his face, her eyes narrowing suspiciously on the discomfort that suddenly flickered across his expression. “What?”

“I don’t have a car,” Dwayne admitted.

Lissianna blinked, her brain slow to accept this news.
Everyone
over the age of twenty owned a car in Canada. Well, practically everyone. Okay, perhaps that was an exaggeration, but most single males of dating age had wheels. It was like an unwritten law or something.

Before she could comment, Dwayne added, “I thought
you’d
have one.”

It sounded almost like an accusation, Lissianna noted and scowled. In some ways, the women’s movement really hadn’t done them any favors. There had been a day when he, as the man, would have had the vehicle or taken on the responsibility of finding them a place to be alone without a second thought. Now he was looking displeased, as if
she’d
let
him
down somehow by not having a car.

“I have a car,” she found herself saying defensively. “But I rode here tonight with my cousin.”

“The chick with pink hair?”

“No. That’s my friend, Mirabeau. Thomas drove,” Lissianna answered absently as she considered the problem. He had no car and Thomas had locked up the Jeep when they’d arrived. She supposed she could go back into the bar, find Thomas and borrow his keys; but really, Lissianna didn’t want to use his Jeep for—

“Well, that’s all right. I don’t mind the great outdoors.”

Lissianna blinked her thoughts away with a start as he grasped her by the hips and drew her against him. She instinctively leaned away, putting some space between their upper bodies, but that did nothing to stop their lower bodies from meshing. It was suddenly clear that the idea of the great outdoors
really
didn’t bother Dwayne. If anything, the hardness pressing against her suggested that the idea excited him. He was obviously an excitable guy,
Lissianna decided. She herself didn’t see the attraction of the great outdoors, at least not during a Canadian winter.