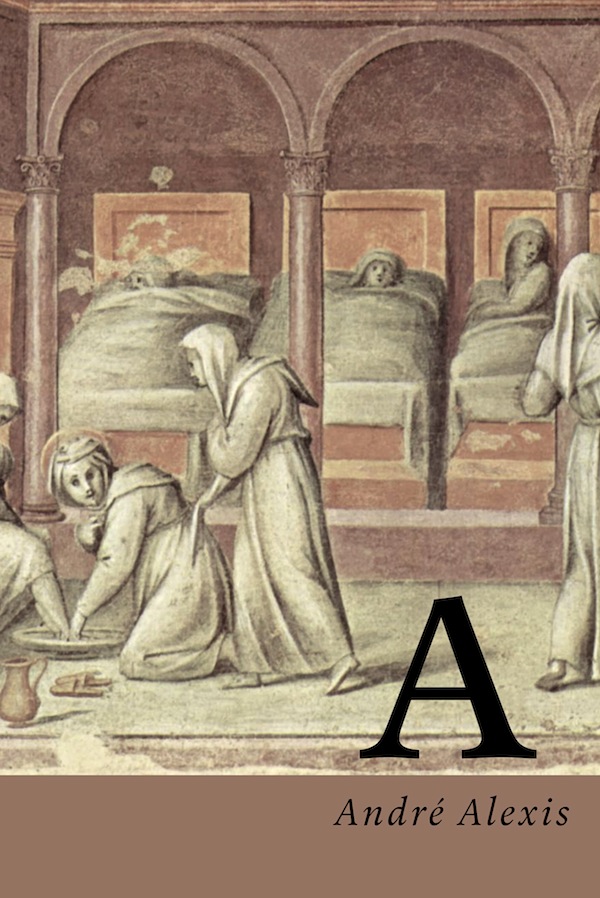 All rights reserved. No part of this publication may be reproduced or transmitted in any form or by any means, electronic or mechanical, including photocopying, recording, or any information storage or retrieval system, without permission in writing from the publisher.

The production of this book was made possible through the generous assistance of The Canada Council for the Arts and The Ontario Arts Council.

A
is a work of fiction in which AndrÃ© Alexis presents the compelling narrative of Alexander Baddeley, a Toronto book reviewer obsessed with the work of the elusive and mythical poet Avery Andrews. Baddeley is in awe of Andrews's ability as a poet â more than anything he wants to understand the inspiration behind his work â so much so that, following in the footsteps of countless pilgrims throughout literary history, Baddeley tracks Andrews down thinking that meeting his literary hero will provide some answers. Their meeting results in a meditation and a revelation about the creative act itself that generates more and more questions about what it means to be “inspired.”

Then things become all at once strange.

There was once a book reviewer named Alexander Baddeley. Though he thought, as reviewers often do, that reviews were meant to be “corrosive” in order to be true, he was too much the lover of words to be cruel or condescending, dismissive or unkind.

To make up for his “failings,” Baddeley sometimes flaunted his own (wilfully acquired) quirks as if they were the marks of deep feeling. For instance, he inevitably ate a single Brussels sprout and vanilla yoghurt for lunch, and he refused to take the subway because he was “afraid of snakes.” (He was afraid of neither snakes nor subways.) None of this helped his reputation, though. Among the very few who cared about book reviews, Baddeley was known for his bland diction and his so-so mind. In a word, he was unsuccessful.

Still, at the heart of the man, there was a longing to be better â to be more acute, deeper, more understanding â and this almost palpable longing made his company desirable to others. It inspired sympathy and a certain amount of pity as well. Among those who pitied him was the book editor of the
Globe and Mail
, Leo Martinson, a man who, once a month, assigned Baddeley a book to review, thus assuring him of the $300 that were the basis of his income. To earn the money he needed for food â because his rent in Cabbagetown was $300 a month â Baddeley reviewed other books elsewhere and sold his review copies to second-hand book shops as soon as he had done with them. In this way, he made a miniscule living, eating little, and going nowhere that cost money.

As concerns Baddeley's sensibility, there is one more thing to say, but it is the most important thing. Alexander Baddeley would not sell the books of Avery Andrews. These he kept in a squat, glass-fronted, bookcase in his room at the boarding house. The seven books of poetry Avery Andrews had written shared space with a
King James Bible
, a complete Shakespeare, a
Strunk & White
, a Roget's, and a concise Oxford Dictionary. These books were Baddeley's valuables, held behind shatterproof glass, secured to his desk, locked against the vagrants who, from time to time, wandered in off the street and ransacked the rooms of the house where Baddeley lived.

The books of Avery Andrews â
First, After First, More, Again More, Still More, More Two
and
More Three
â were, despite their bewilderingly mundane titles, treasured in those circles where poetry had any standing at all. Even among Andrews' most fervent admirers, however, Baddeley was exceptional. He had memorized every one of the 500 poems Andrews had published. He knew those that were considered “canonical” as well as those that were merely brilliant. Baddeley's love for Andrews' verse was an un-dimmable light in his soul and he would have done anything to meet the poet.

In his desire to meet Avery Andrews, Baddeley was not alone. No one had seen Andrews in a long time. Few could remember him, save for one of his high school classmates who did not so much remember Andrews as he did the blank in his memory where, at some point, Andrews must have been: Avery sitting beside him in class; Avery drinking from a water fountain; Avery winning an award for physics. Whatever the reason for his withdrawal from society, Avery Andrews had not allowed a photograph of himself to be taken in decades, had not granted an interview, had not collected any of the awards his poetry had won.

Andrews' “hauteur” appealed to most of his readers. To them, it seemed fitting that the writer of almost glacially perfect work should live beyond the world, inaccessible. Andrews' attitude was particularly appealing to Baddeley. It was “superb” in a way Baddeley imagined himself emulating if he had
half
of Andrews' talent. He revered Andrews' silence but, like all fervent admirers, there was something behind the reverence. There was the conviction that, should they ever meet, he and Andrews would understand each other.

Also: Baddeley was working on what he hoped would be a magnum opus, a critical study entitled T
ime and Mr. Andrews: Chronos in the Poetry of Avery Andrews
. (The title alone had cost him a few white nights. He had agonized over its every word and diacritical mark.) Yes, Baddeley wanted Andrew's approval, but even better would be Andrews' involvement, an interview, say, something to let his admirer know that
Time and Mr Andrews
was not wrong-headed.

Unfortunately, Baddeley had no idea how to go about contacting the poet. Andrews' publisher refused to pass on the least scrap of correspondence. Nor were they impressed by Baddeley's credentials as a reviewer. It did not seem to trouble them that they were denying Andrews access to a careful and committed reader. Without the help of Andrews' publisher, contacting the poet seemed unlikely.

The key to finding Avery Andrews was nearer to hand than Baddeley imagined, however. It was in the person of his friend, Gilbert “Gil” Davidoff. Davidoff, a mediocre novelist who thought highly of himself, was a compulsive womanizer. Among the women who'd given herself to him (in the misplaced hope that the intensity of his self-love might be matched by his love for another) there was one, a certain Marva Wilson, who'd had a relationship with Avery Andrews. It was a relationship of which she was shyly proud, being herself an admirer of poetry.

This information had come to Davidoff in an unexpected way. He had finished with Marva Wilson. After fucking, he had thanked her, as if their lovemaking had been a sort of cordiality, like opening a door for someone at a mall. Reaching for his shoes and socks, he'd turned to catch the small, compact woman looking at him.

â You know the story, Davidoff had said. Rambling man. Got to keep moving.

â You're not even that good a writer, said Marva bitterly.

â Right, said Davidoff. And who'd you say your father was? Northrop Frye?

â How can you be so cruel? she asked. What did I ever do to you?

â Now this, said Davidoff to Baddeley some time later, was the moment of truth. Two choices. You either run or you stay and smooth things over. But I like to smooth things over, 'cause if your reputation's in tatters you don't get what matters. You know what I mean? I'm sure you've been in the same position.

As a point of fact, Alexander Baddeley had never been in the same position, but he nodded sagely, inviting his friend to continue. There wasn't all that much to continue with, however. Davidoff had soothed Marva's feelings by pretending to care about her literary opinions. Then, just before she fell asleep, she'd let it slip that she had dated Avery Andrews, that they had been in love. Davidoff had â
for Baddeley's sake
, you understand â expressed admiration mixed with “just the right touch of incredulity.” So, as she fell asleep, Marva had felt compelled to convince him. She had described the house on Cowan where he lived. And she had described the man himself: he was short; dark-haired but greying; his eyes small, his brow making them seem as if they were recessed; his mouth almost dainty; his skin smooth; his fingers long and elegant. And then there was the way he dressed. He invariably wore a yellow cardigan and oxblood oxfords. Winter, spring, summer and fall. A proper ritual: always the same sweater and shoes.

â I know, said Davidoff. No writer should wear a cardigan, unless he's dead.

Baddeley was too excited by what he'd heard to be offended by Davidoff's words. Imagine: Avery Andrews lived in Toronto. All these years wondering where Andrews might be and he was in Baddeley's own city. And he lived in Parkdale! Now, that was an odd detail. Parkdale was nondescript, filled (in Baddeley's mind) with would-be artists and sad foreigners, with low-rent criminals and aspiring young professionals. Yet, what better place for a man who sought anonymity? It was just the neighbourhood for a genius like Andrews, when you really thought about it.

(Parkdale was on the other side of town from his rooming house, but it was still possible â perhaps even likely â that he had met Andrews on a street somewhere. No, on second thought, it was not likely. He could not have passed a man like Avery Andrews â a poet whose mind and spirit were indissociable from his (that is, Baddeley's) own soul â without recognizing him at once.)

Then again, had Marva Wilson been telling the truth or had she been saying any old thing in order to impress Gil? That was the question and, when asked, Gil could not say for certain. Marva had sounded sincere, he'd said. But, then, Gil Davidoff did not believe that any woman to whom he'd made love could be insincere, acute sexual gratitude being very like sodium pentothal. Baddeley was skeptical about the “truth-telling” that happens after lovemaking. He himself had managed to lie while talking to women with whom he'd just copulated. Actually, he had not lied. He had, once or twice, avoided speaking the truth in order to spare his lover's feelings. But the point still stood: Why should a woman not be able to fabricate or stretch a truth in similar circumstances? Worse yet, a host of mitigations occurred to him: Marva was telling the truth about some aspectd of her story (the cardigan, say) but not others; Marva was telling the truth but Andrews had moved from Parkdale; Marva was lying but knew the truth; Marva had been the victim of a man claiming to be Avery Andrews ...

Still, thanks to Gil Davidoff, Baddeley had been given a hint, a provocation, somewhere to look or, if Marva proved unreliable, somewhere it was pointless to look.

Anything but Vanilla... by Liz Fielding
Deck The Halls With Love: Lost Lords Of Pembrook Novella by Lorraine Heath
Soul Circus by George P. Pelecanos
Big and Aimee: Beautiful Chaos by Charae Lewis
Light from a Distant Star by Morris, Mary Mcgarry
The Turncoats (The Thirteenth Series #2) by G.L. Twynham
The Veritas Conflict by Shaunti Feldhahn
Shotgun by Courtney Joyner
Island of Dragons by Lisa McMann
Pull (Push #2) by Claire Wallis