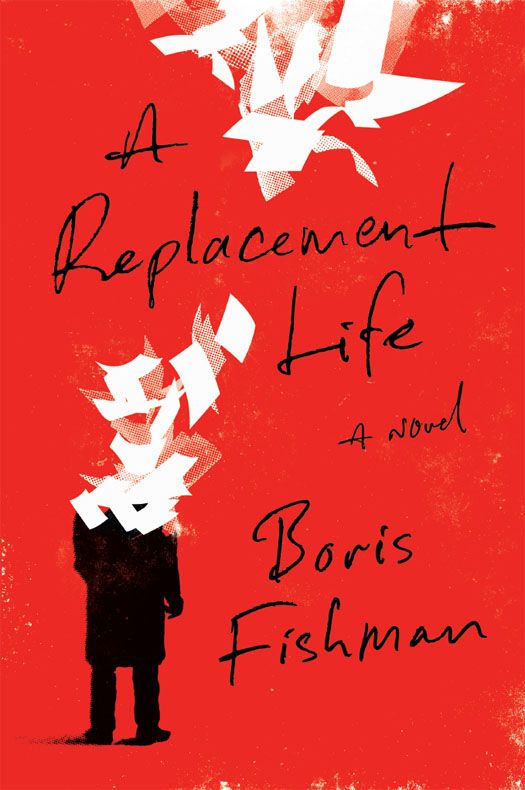 F
OR MY GRANDPARENTS AND MY PARENTS

All writing is revenge.

T
he telephone rang just after five. Unconscionably, the day was already preparing to begin, a dark blue lengthening across the sky. Hadn’t the night only started? Slava’s head said so. But in the cobalt square of the window, the sun was looking for a way up, the great towers of the Upper East Side ready for gilding.

Who was misdialing at five o’clock in the morning on Sunday? Slava’s landline never rang. Even telemarketers had given up on him, you have to admit an achievement. His family no longer called because he had forbidden it. His studio, miraculously affordable even for a junior employee of a Midtown magazine, rang with echoes, nothing but a futon, a writing desk, a torchiere wrapped in cast-iron vines (forced on him by his grandfather), and a tube television he never turned on. Once in a while, he imagined vanishing into the walls, like a spirit in Poe, and chuckled bitterly.

He thought about getting up, a surprise attack on the day. Sometimes he rose extra-early to smell the air in Carl Schurz Park before the sun turned it into a queasy mixture of garbage, sunscreen, and dog shit. As the refuse trucks tweaked the slow air with their bells, he would stand at the railing, eyes closed, the river still black and menacing from the night, the brine of an old untouchable ocean in his nose. An early start always filled him with the special hope available only before seven or eight, before he got down to the office.

The phone rang again, God bless them. Defeated, he reached over. In truth, he was not ungrateful to be called on. Even if it turned out to be a telemarketer. He would have listened to a question about school bonds, listened gravely.

“Slava,” a waterlogged voice—his mother—whispered in Russian. He felt anger, then something less certain. Anger because he had said not to call. The other because generally she obeyed nowadays. “Your grandmother isn’t,” she said. She burst into tears.

Isn’t.
Verbiage was missing. In Russian, you didn’t need the adjective to complete the sentence, but in English, you did. In English, she could still be alive.

“I don’t understand,” he said. He hadn’t spoken to any of them in weeks, if not a month, but in his mind, his grandmother, quiet sufferer of a cirrhosis that had been winning for years, was fixed to her bed in Midwood, as if the way he remembered her was the way she would be until he came to see her again, until he authorized new developments. Something previously well placed dislodged in his stomach.

“They took her in on Friday,” his mother said. “We thought it was only hydration again.”

He stared at the blanket around his feet. It was as frayed and fine as an old shirt. Grandmother had scoured it in the wash how many times. The Gelmans had brought it from Minsk, as if blankets were not sold in America. And they weren’t, not like this, a full goose inside. The cover opened in the middle, not on the side. A girl had gotten tangled up in there in a key moment once. “I think I need Triple A,” she said. They burst out laughing and had to start over.

“Slava?” his mother said. She was quiet and frightened. “She died alone, Slava. No one was with her.”

“Don’t do that,” he said, grateful for her irrationality. “She didn’t know.”

“I hadn’t slept the night before, so I left,” she said. “Your grandfather was supposed to go this morning. And then she died.” She started to flow again, sobs mixing with snot. “I kissed her and said, ‘I’ll see you tomorrow.’ Slava, mercy, I should have stayed.”

“She wouldn’t have known you were there,” he said in a thick voice. He felt vomit rising in his throat. The blue morning had become gray. The air conditioner chugged from the window, the humidity waiting outside like a thief.

“All by herself, she was taken.” His mother blew her nose. The receiver jostled on her end. “So,” she said with sudden savagery. “Now will you come, Slava?”

“Now he will come,” she said viciously. Slava’s mother held the world record for fastest trip from tender to brutal, but this tone had not entered even their arguments about his abandonment of the family. “Now is finally a good enough reason? The woman who would have skinned herself for you. The woman you saw—one time, Slava, in the last year?” She changed her voice to emphasize her indifference to his opinion: “We’re doing the funeral today. They say it has to be twenty-four hours.”

“We’re not religious,” he said. “Are you going to bury her in a shroud, too, or whatever they do? Oh, it doesn’t matter.”

“If you come, maybe you can have a say,” she said.

“Help your grandfather,” she said. “He’s got a new home attendant. Berta. From Ukraine.”

“Okay,” he said, wanting to sound helpful. His lips twitched.

His grandmother wasn’t. This possibility he hadn’t rehearsed. Why not—she had been ill for years. But he had been certain that she would pull through. She had pulled through far worse, pulled through the unimaginable, what was a bit more?

His grandmother was not a semi-annual hair-tousler. (
Had not been
? The new tense, a hostile ambassador, submitted its credentials.) She had raised him. Had gone into the meadow with him, punting a soccer ball until other children showed up. It was she who found him making out with Lusty Lena in the mulberry bush and she who hauled him home. (Grandfather would have rubbed his hands and given instruction, Lou Duva to Slava’s Holyfield, half-nelsoned in Lena’s formidable bust, but not for Grandmother loucheness.) When the nuclear reactor blew up, Grandmother cursed Grandfather for bothering with the radio, traded one of her minks (in fairness, acquired by Grandfather on the black market) for a neighbor’s Zhiguli, and had Slava’s father drive them all for a week to Lithuania, where the mink housed and fed them.

Slava knew her in the body. His mouth knew, from the food she shoveled there. His eyes knew, from the bloated sweep of her fingers. Grandmother had been in the Holocaust—
in
the Holocaust? As in the army, the circus? The grammar seemed wrong.
At
the Holocaust? Of it, with it, from it, until it? The English preposition, stunned by the assignment, came up short—though she said no more than that, and no one disturbed her on the subject. This Slava couldn’t fathom, even at ten years old. Already by then he had been visited by the American understanding that to know was better than not to know. She would go one day, and then no one would know. However, he didn’t dare ask. He imagined. Barking dogs, coils of barbed wire, an always gray sky.

“Goodbye, Slava,” his mother interrupted. She spoke as if she hardly knew him. The line made its noises between them. He had the sensation that only they were speaking while eight million slept. The unreality of it teased him. Heartlessly: Grandmother was gone. Grandmother wasn’t.

How long were they silent? Even while talking, they were silent with each other. Finally, in a faraway tone, his mother said: “Our first American death.”

Downstairs at the doorman station, Rich was buried in the delivery closet.
Slava accelerated to reach the front door first, as he disliked mincing in place while Rich (né Ryszard, Poland), Bart (né Bartos, Hungary), or Irvin (né Ervin, Albania) shuffled toward it. Slava liked to open the door for older men, not vice versa. However, Rich, Bart, and Irvin were eager to take their place in his day, their eyes lit with resentful admiration—a fellow immigrant, risen to heights. Once, Slava had tried to persuade Rich that he had the front door, but the older man only lifted his index finger in warning.

“Slava, how evorytyng?” Rich said now from the depths of the closet. He had buffed the foyer, and Slava, a dozen feet from the door, squeaked with every step. With a dancer’s precision, the cumbersome Pole emerged from the thicket of dry cleaning and delivery boxes and slid his hand into the door handle. “Have nice day, pliz, okay?” he said with touching disdain.

Our first American death. Have nice day, pliz. As Slava strode out of the building, the day’s what-ifs again presented their tempting alternatives. Rich still got the door first, the 6 train was still inept for the crush of the Upper East Side, and Grandmother was still alive, scratching weakly at her lesions in a bathrobe in Midwood. Sure, her bile ducts were blocked, her bilirubin was high—Billy Rubin, he was a half-Jewish boy, he wouldn’t hurt her!—but she was still there, chomping her lips and glowering at Grandfather.

Since the last time Slava had come to South Brooklyn—almost a year prior; his mother could count without pity—a new residential tower had started to grow around the corner from his apartment building, two restaurants on his block had shuttered and reopened as others, and the local councilman had been forced out in a sex scandal. As the train surged above-ground at Ditmas, Slava rode past the same repair shops and convenience stores, the same music bouncing from the tinted windows of spoilered Camaros, the same corrupt councilman on the billboards (only his vice was kickbacks). These people had come to America to be left alone.

Here was a foreign city, if you were coming from Manhattan. The buildings were smaller and the people larger. They drove cars, and for most, Manhattan was a glimmering headache. As the train neared Midwood, the produce improved and the prices shook loose. Here, a date tasted like chocolate, and it was a virtue to persuade the grocer—Chinese not Korean, Mexican not Arab—to have it for less than the cardboard placards wedged into the merchandise said. This was still a world in the making. In some of its neighborhoods, the average time since arrival was under twelve months. These American toddlers were only beginning to crawl. Some, however, had already found the big thumb of American largesse.

Grandfather lived on the first floor of a tawny-bricked building tenanted by old Soviets and the Mexicans who wouldn’t let them sleep. His senior-citizen benefits didn’t permit him to make an appearance on official payrolls. To the Kegelbaums in 3D, he sold salmon picked off the wholesalers for whose deliveries he waited in front of Russian food stores. Why pay $4.99/lb inside when he could pay $3 on the sidewalk? The boys in the wholesale truck laughed and threw him free flounder and cod.

Next door to the Kegelbaums were the Rakoffs, American Jews. These were aghast by the seafood emerging from the mesh grocery bag in Grandfather’s hands. The Aronsons (Soviet, 4A) paid for the nitroglycerine that Grandfather’s doctor overprescribed in exchange for a monthly bottle of Courvoisier cognac. To the Mexicans (2A, 2B, illegal basement apartment) Grandfather gave haircuts, because they partook of neither salmon nor nitroglycerine. The churn in which these new arrivals gained body barely had time to spit out cream before it was
refilled. Naturally, each batch was thinner than the one that preceded it.

Slava scaled the stairs to the first floor and stood before Grandfather’s door. On an ordinary day, you could hear his television from the ground-floor mailboxes—revenge on the basement Mexicans, who smashed tallboy Budweisers into smithereens until dawn on the weekends. Now it was soundless, on this side of the door the glory of a day just like any other.