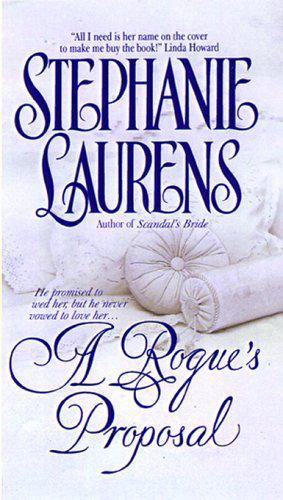 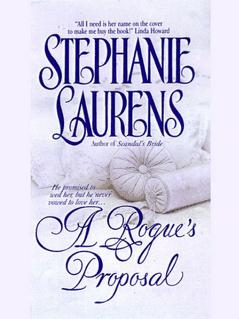 Other Avon Books by

This is a work of fiction. Names, characters, places and incidents either are the products of the author’s imagination or are used fictitiously. Any resemblance to actual events, locales, organizations, or persons, living or dead, is entirely coincidental and beyond the intent of either the author or the publisher.

A R
OGUE’S
P
ROPOSAL
Copyright © 1999 by Savdek Management Proprietory, Ltd. All rights reserved under International and Pan-American Copyright Conventions. By payment of the required fees, you have been granted the non-exclusive, non-transferable right to access and read the text of this e-book on-screen. No part of this text may be reproduced, transmitted, down-loaded, decompiled, reverse engineered, or stored in or introduced into any information storage and retrieval system, in any form or by any means, whether electronic or mechanical, now known or hereinafter invented, without the express written permission of PerfectBound™. Published by arrangement with the author.

2
She tilted her chin—a delicate, pointy little chin. Set as it was, it looked...

3
Demon rose before dawn the next morning and rode to his stable...

4
The next days passed uneventfully; Flick swallowed her impatience...

5
After dinner that evening, Demon retired to the front parlor of his farmhouse...

6
Demon ran Gillies to earth later that evening in the crowded tap...

7
He’d seen her face so often in his dreams that he didn’t notice...

8
“I wondered if you’d care for a drive?” Gasping, Flick whirled...

9
When the next dance commenced, Demon was...

10
For Flick, their journey to the library was the start of a most peculiar week.

11
Demon set out for London just after dawn.

12
She’d never seen so many men crammed into one space in her life.

14
“Drive on!” Demon climbed into the manor’s carriage...

15
Despite their languid elegance, when Cynsters acted, things happened...

17
Time was indeed passing, but not as Flick had hoped.

18
Yet another ball—Flick wished, very much, that she was back at Hillgate...

21
The instincts of years hadn’t died—Demon woke long before anyone else...

22
What occurred next happened so quickly that to Flick it was just a blur.

Everyone attended. The Duke and Duchess of St. Ives sat in the first...

With an arrogant smile, Harold Henry Cynster—Demon to everyone, even to his mother in her weaker moments—drew his curricle to a flourishing halt in the yard behind his Newmarket stable. Tossing the reins to his groom, Gillies, who leaped from the back of the elegant equipage to catch them, Demon stepped down to the cobbles. In a buoyant mood, he ran a loving hand over the glossy bay hide of his leader and scanned the yard with a proprietorial eye.

There was not a scheming mama or disapproving, gimlet-eyed dowager in sight.

Bestowing a last fond pat on his horse’s shoulder, Demon headed for the open rear door of the stable. He’d left London at midday, unexpectedly content to have the breeze blow the cloying perfume of a certain lascivious countess from his brain. More than content to leave behind the ballrooms, the parties, and the myriad traps the matchmaking mamas laid for gentlemen such as he. Not that he’d found any difficulty in evading such snares, but, these days, there was a certain scent on the breeze, a presentiment of danger he was too experienced to ignore.

First his cousin Devil, then his own brother Vane, and now his closest cousin, Richard—who next of their select band of six, the Bar Cynster as they were called, would fate cause to trip into the arms of a loving wife?

Whoever it was, it wouldn’t be him.

Pausing before the open doors of the stable, he swung around, eyes squinting in the slanting sunlight. Some of his horses were ambling in the paddocks with their lads in close attendance. On the Heath beyond, other stables’ strings were exercising under the eyes of owners and trainers.

The scene was an exclusively male one. The fact that he felt entirely at home—indeed, could feel himself relaxing—was ironic. He could hardly claim he didn’t like women, didn’t enjoy their company. Hadn’t—didn’t—devote considerable time to their conquest.

He couldn’t deny he took pleasure in, and derived considerable satisfaction from, those conquests. He was, after all, a Cynster.

Whereas the other members of the Bar Cynster, as wealthy, well-born gentlemen, had accepted the fact that they would marry and establish families in the time-honored tradition, he had vowed to be different. He’d vowed never to marry, never to tempt the fate with which his brother and cousins had fenced and lost. Marriage to fulfill society’s obligations was all very well, but to marry a lady one loved had been the baneful fate of all male Cynsters to date.

A baneful fate indeed for a warrior breed—to be forever at the mercy of a woman. A woman who held one’s heart, soul and future in her small, delicate hands.

It was enough to make the strongest warrior blanch. He was having none of it.

Casting a last glance around the neat yard, approving the swept cobbles, the fences in good repair, Demon turned and entered the main stable housing his racing string. Afternoon stables had already commenced—he would view his exercising horses alongside his very capable trainer, Carruthers.

Demon was on his way to his stud farm, located three miles farther south of the racecourse in the gently undulating countryside bordering the Heath. As he had every intention of avoiding marriage for the term of his natural life, and the current atmosphere in London had turned fraught with the Season about to start, and his aunts, as well as his mother, fired with the excitement of weddings, wives and the consequent babies, so he’d elected to lie low and see out the Season from the safe distance of his stud farm and the unthreatening society of Newmarket.

Galactic Bounty by William C. Dietz
Dead Souls by Ian Rankin
Cates 04 - The Terminal State by Somers, Jeff
Nameless by Jenkins, Jennifer
The Other Girl by Pam Jenoff
Phoenix in Shadow - eARC by Ryk E Spoor
Just Another Sucker by James Hadley Chase
Refracted (The Celadon Circle Book 2) by Nicole Storey
In the Dead of Cold by Allie Quinn
Past Due by Catherine Winchester