Read A Shift in the Water Online

A Shift in the Water 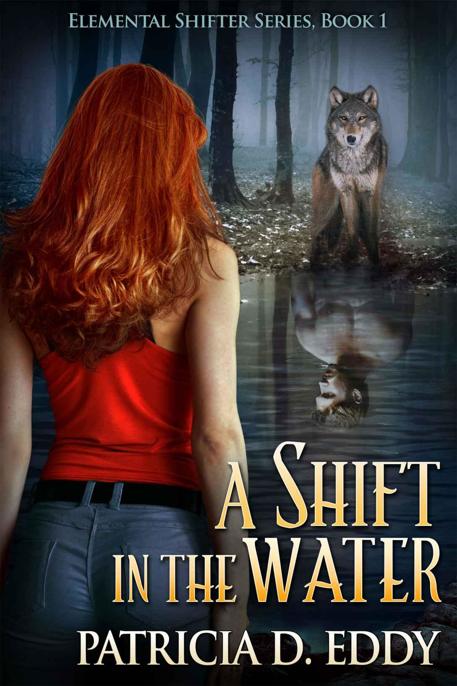 A Shift In The Water

A Shift In The Water

All rights reserved. No part of this publication may be reproduced, stored in a retrieval system, or transmitted, in any form or in any means—by electronic, mechanical, photocopying, recording or otherwise—without prior written permission. Select passages may be quoted for editorial use only.

This is a work of fiction. Names, characters, places, and incidents are either the product of the author’s imagination or used fictitiously. Any similarities to real persons or events are purely coincidental.

Cade Bowman ran his calloused hand over the fine grain of the wood. The sweet scent of sawdust filled his shop. He rolled the little train engine over the workbench. A wobble in the back wheels needed tending. He picked up the small rotary sander and flicked the switch.

“Boss-man?” Livie Parker-Grantham, Cade’s personal bodyguard and shop assistant, looked back from her perch on a stool at the front counter and cocked a brow.

A growl escaped Cade’s lips before he could stop it. The new moon was hours away and Cade was on edge. The wolf inside of him ached for release. He was a pureblood werewolf, like Livie, and so he
could
shift during a new moon, but he hated those few unsteady hours where his wolf clawed and railed inside him like an untrained, savage dog. His bitten wolves were lucky they couldn’t shift this time of the moon’s cycle. Unsteady fingers dropped the train engine and he turned off the sander. “Dammit, Livie. Get out of here. I shouldn’t even have come in today. Go be with Shawn.”

Shawn, Livie’s mate, was the pack’s financial planner. He was a good match for Livie, but he was bitten, not born. His temper ran hotter than pureblooded werewolves, particularly during the new moon. Liam O’Sullivan, Cade’s beta, was the other pureblooded werewolf in Cade’s pack. Peter Shea worked construction with Liam, Ollie Case was the Whatcom County Sheriff, and Christine Smart was a naturopath at the local medical center. On the new moon, Cade ordered them all to stay home—or at least far away from sharp objects and hard alcohol.

Cade snorted. “Everyone’s an ass today. It’s worse than usual this month. Isn’t it?” He ran a hand over the stubble along his jaw. Work could wait. He needed to go hide in his basement apartment for the next thirty-six hours. At least he owned his own shop and could get away with closing early. Bellingham Woodworking was his pride and joy—almost as much as his pack. He’d taken over as alpha five years ago after the pack’s former leader, a rough mid-sixties werewolf named Mike, had died suddenly in a car accident.

“Christine said there was an annular eclipse today. She warned me we’d have it bad this month. I was going to go get some coffee. Want some?” She grinned as her bright blue eyes lit up. The pack owned controlling interest in a coffee shop down the street from Cade’s store. He’d never much liked coffee until they’d bought that shop. Now he lived on it.

The bells over the front door jingled. An older man—gray-haired, bearded, and limping—pushed into the shop, his face hidden behind dark sunglasses and a ball cap.

“We’re closed,” Livie said as she slid out of her chair and approached the man.

“I need Cade Bowman. This is his shop, isn’t it?” The man took off his glasses and hat and peered around Livie. The blood drained from Cade’s face.

“Bill?” Cade rushed over and embraced the old werewolf, practically lifting the man off his feet. “What are you doing here? How did you find me?”

Bill withdrew a folded printout of a news article and handed it to Cade. A photo showed Cade standing in profile in front of a large installation he’d done for the Gates Foundation two months ago. The installation was two stories tall and nearly twenty feet wide. It had taken him a year to design and carve and a month to assemble. The fee had put a cool three hundred thousand in the pack’s coffers, though, and more than seventy-five thousand in Cade’s personal bank account. A caption read, “
Cade Bowman and his piece for the lobby of the Gates Foundation. The Bellingham artist used reclaimed wood for the piece, which was commissioned by Bill Gates personally
.”

“Dammit. I didn’t know they took that picture. I told them not to.” Cade didn’t like the publicity. He preferred smaller projects, like the train cars for the mayor’s daughter. Large contracts paid the bills though and he did them when he could.

“I’ve been looking for you for years, son. We’ve got to talk. Are there more wolves around? You got a pack? You need to get ‘em here.” Bill shoved his hands into the pockets of his worn jeans. It was a cool May day, but dry. His shoulders hunched and he glanced behind him, a trace of paranoia in those old eyes.

“Yeah. I don’t like to bother my pack on the new moon, though. Most of them are bitten.” Cade laid a hand on Livie’s shoulder. “This is Livie. Livie, this is Bill Fixton. He was my father’s beta.”

“Yeah. I know. I didn’t go looking for it, but they wanted me. Been running things for about five years now and I wouldn’t have it any other way. I wish Dad had lived to see this. Or lived long enough for me to apologize for running out on my birthright. I had to find my own way, y’know?” The last sentence tumbled out of him from a place he thought he’d buried long ago. A place of regret and pain. Cade leaned back against the workbench. God, he’d missed Bill. The man had been like an uncle to him all during his youth.

“Is there somewhere private we can go? Preferably somewhere deep underground?” Bill looked over his shoulder again. The old wolf was scared of something.

“What the hell, Bill? This is Bellingham. Nothing ever happens here. I can’t remember the last time there was a murder in this town. Worst we get is some graffiti and petty theft. Calm down.”

“I can’t. Don’t make me explain here. We need to get somewhere safe first.”

Cade looked over at Livie. She shrugged and handed Cade the phone. “We can meet at our place. It’s the biggest. It’s not underground, but if we try to cram in your tiny living room this time of the month, someone’s going to end up with a black eye.”

Cade stifled his laugh when he looked back at Bill. The older wolf was practically shaking. He was panicked.

“Call a pack meeting. Please.” Bill’s eyes flashed with gold, his wolf asserting control, desperate. Like Cade, Bill was a pureblood and could shift at will.

“If I call my pack in on the new moon I need to have a good reason. What’s going on?”

“Like I said, we need to talk. I’m scared. I ran all the way from the northern border of Canada to get here as soon as I saw the photo online. There’s a fire elemental after you, Cade. She’s after both of us. If she finds us, we’re dead.”

An hour later, eight werewolves sat in Livie and Shawn’s living room. The pack owned an apartment building a few blocks from Cade’s shop. There were eight units total, only six occupied. Livie and Shawn had the largest unit. Liam paced, his red hair curling around his collar. Peter and Ollie sat in chairs near the door. Livie, Shawn, and Christine had the couch while Cade leaned against the wall. Bill sat in a leather chair next to the kitchen.

“Spill it,” Ollie said. The beefy sheriff was in his mid-fifties with a bit of graying hair at his temples. His eyes crinkled with concern. While Livie was primarily responsible for the pack’s security, Ollie had the resources of the entire Sheriff’s department at his beck and call in an emergency. As the rest of the department was blissfully unaware of werewolves, he tried to keep interaction with the pack at a minimum.

“Her name is Katerina Olmstead,” Bill said. He nodded at Cade. “She killed your father.”

“Dad crashed his car into a telephone pole after a night at the bar,” Cade replied with a harsh edge to his voice.

“No. He didn’t. Cade, your father never drove drunk in his life. Hell, he hardly drank at all the last few years but if he did, he’d always call me. I talked to the bartender. Your father left with a woman that night. A woman no one had ever seen before. I’m pretty sure she killed every single member of Caldwell’s pack over the past ten years. Nine of us. I’ve been on the run for a year, trying to find you. It was pure dumb luck that I came across that article online last week. If I could find you, so could she.”

Liam cleared his throat. “Why is this elemental after Cade?” His Irish brogue rumbled through the room. “Elementals are generally peaceful. Even fire.” Liam had been in love with an elemental once, many years ago. She’d committed suicide when he’d been away and he’d never quite forgiven himself.

Cade ran a hand over his wavy steel and flax hair. He hadn’t thought of his father in a few years. He didn’t want to go into the details, but if Katerina really was after him, his pack was in danger and he had to be honest with them. Closer than brothers and sisters, werewolf packs were the tightest of families. They shifted together, ran together, and lived together. When a pack member died, it was like losing a part of yourself.

Before Cade could recount the story, the entire building shuddered violently. The strength of the force threw Bill from his chair and Peter against the wall. Glass shattered in the next room.

“Earthquake!” Christine gasped and leapt up off of the couch.

Smoke curled under the front door and the crackle of flames set Cade on edge. “No. Fire. Everyone out. Now!” He jerked his head towards the fire escape. The front door was already starting to burn.

“What the hell would you have me do? If we stay in here, we’re going to burn. Everyone out!” Cade propelled Bill towards the window and helped him over the sill. The rest of the pack followed with Cade bringing up the rear.