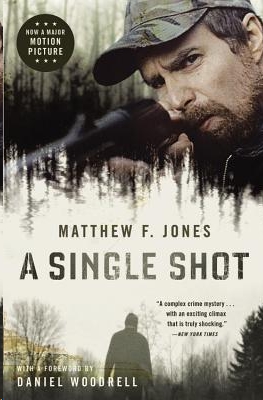 To every good life chased from the good life it was born to.

I
N A TIME
when reliable standards of personal conduct have allegedly eroded and, no longer anchored by religious conviction or cultural cohesion, have diminished to irresolute situational postures and secular mumbles, an older, less elastic code of honor may seem vastly appealing, even heroic. To avert the confusions attendant on choice, such codes are simplified, starkly so, but clearly: Do that to me, you can rely on me to do this to you. Do that to my kin, watch for smoke from your garage. Say that to my wife, and this is the bog where your worried relatives will find you facedown and at peace forever. Should it require the efforts of generations to uphold this code, to respond to the responses, so be it. Such codes ask an awful lot of adherents (my own great grandfather was an adherent and, when a slander on his wife reached his ears, obeyed the code promptly and went door to door with a pistol throughout the neighborhood I still live in, but, shrewdly, no one he encountered would admit to being the source and he did not get the satisfaction of killing some poor wretched gossip, and his wife attempted suicide by drinking Paris Green while he was out thoroughly publicizing the slander) and deliver little, but they yet exist.

John Moon, the resolute, pitiful, and confused man at the heart of
A Single Shot,
one of the finest novels of rural crime and moral horror in the past few decades, has an inherited code of his own, but almost innocently violates it, and experiences a cascade of nightmares in response. He is a hunter, raised on the rules of hunting, the ethics of hunting, and can’t let a wounded deer slink into the thicket to die a slow, agonizing death. So he follows as he should, obeying every tenet of the deerslayer code, chases up hills and over rocks, on and on, then down another hill until exhausted, when suddenly a bush wiggles, there’s a flash of brown, and he breaks the most important and basic rule of all, pulls that trigger. Moon is the creation of Matthew F. Jones, a hard, wonderful, and very powerful writer you might not know yet, but ought to soon. But be forewarned, dear reader: Jones is a twisted motherfucker when sitting at his keyboard, twisted in the manner so many of us appreciate mightily, and will not spare your tender sensibilities should you be among those poor souls afflicted by such. He rakes you over the coals at a measured pace, unfurls wrath from six angles, and the amen he delivers over John Moon will keep even other twisted motherfuckers awake nights.

Andrei Tarkovsky, the legendary Russian film director, once said, “The allotted function of art is not, as is often assumed, to put across ideas, to propagate thought, to serve as an example. The aim of art is to prepare a person for death, to plough and harrow his soul, rendering it capable of turning to good.”

My personal list of nasty country boy and girl writers who so admirably insist on sharing their “ploughing and harrowing” with the wider world, representing, if you will, is select
but with room for more: Jim Thompson, Flannery O’Connor, Tom Kromer (
Waiting for Nothing
), Charles Williams, Tillie Olsen (in her fashion; trust me), James Ross, Meridel LeSueur (
The Girl,
a masterpiece), vast acres of Joe Lansdale, Larry Brown, William Gay, and there are others. Matthew F. Jones has a seat at the table and has for a good while, though not everybody noticed. Well, notice now, friends, Jones is major, he’s got the piss and vinegar and moral rigor that make books matter, and he’s got more books to offer.

B
EFORE THE SUN
is up, John Moon has showered, drunk two cups of coffee, and changed into his blue jeans, sweatshirt, and Timberland hiking boots. He has eaten two pieces of toast, a bowl of cereal, and put out food for his wandering dog. Before leaving the trailer by the front door, he gets his 12-gauge shotgun and a handful of slugs from the gun cabinet off the kitchen.

The grass is damp with dew and the early-June air is heavy and already warm, promising it will be hot within a few hours. A mourning dove is cooing in a tree somewhere to John’s left. Down the road, past the treeline, he hears the gentle clanging of cowbells and the lowing of Cecil Nobie’s herd on its way from the pasture to Nobie’s barn to be milked. The sun is just starting to peek out over the crest of the mountain directly east of the one John lives two-thirds to the top of.

Gazing down at the converging roads winding like miles of dusty brown carpet through the hollow below him, John sees a set of headlights descending the right fork, piercing the three-quarters dark. He thinks this strange since only he and the Nobies live on the right fork and unless there’d been
an accident at Nobies’, in which case someone from there would likely have called John, none of them would be driving into town at four-thirty in the morning. John wonders if the vehicle might belong to a conservation officer, then decides he’s being paranoid. No green cap is going to get up before dawn to search for would-be poachers. Thinking two teenagers must have fallen asleep parking the night before, John shrugs, then starts walking up the mountain.

He hikes five hundred yards or so up to the road’s end, then turns right and heads on a narrow path into a forest of pine trees on the state preserve. There’s no wind and it’s so quiet in the forest that, even on a soft bed of pine needles, John’s footsteps echo in his ears as if he is treading on snow. Every few steps, he stops, listens for several seconds, then, not hearing anything, moves on. He is looking for a ten-point buck he has seen three times in the last week, most recently on the previous afternoon from his back porch, where, through binoculars, he watched it graze for several minutes at the edge of the preserve before it loped into the pines. John has figured the buck has a bed somewhere in the pines. He has balanced in his mind the value of a hundred fifty pounds of dressed venison versus the thousand dollars in fines and possible two months’ jail time it would cost him in the unlikely event that he is caught shooting the deer out of season on state land, and has decided the risk is worth it.

As he approaches the far edge of the pines after which the forest turns denser with deciduous trees and brush, in the canopy of pine boughs a crow starts cawing. Several others join in. His senses suddenly heightened, John cocks the shotgun. The sharp click of the engaging mechanism increases
the crows’ agitation. A squirrel or a chipmunk jumps from one tree to another above him. A pinecone drops near his feet. Several smaller birds—sparrows or swallows—take flight, slicing through the still air, before landing again.

Sensing the presence of a large animal besides himself, John cradles the gun in two hands and starts slowly walking toward the pines’ edge, where the half-risen sun gives the trees’ upper branches a bejeweled look. A branch suddenly snaps to his left. Then a sound like rushing water. In one motion, John wheels toward the noise, puts the butt of the shotgun to his shoulder, flicks off the safety, and aims at a bouncing tree limb. Just beyond the limb, he sees a tan-and-white flank disappearing into a patch of thistles and, above the thistles, a large rack of antlers. John fires. He hears the buck snort, sees the antlers tilt to the right, below the level of the bushes, then rise up again, and, as he recocks the shotgun, the deer shoot out the other side of the thistles, beyond his range, and disappear.

John pushes the safety in and runs toward the thistles, but before he gets there, he stops next to a large oblong-shaped indentation in the pine needles. He kneels down, touches with his fingers the center of the spot, feels the warmth left from the sleeping deer, even sees some of its coat lying there. He feels his heart loudly thumping in his chest, air rushing in and out of his nostrils, beads of sweat rolling down from his armpits. And he can smell the buck, the adrenal surge it’s released, like John’s own, pungent and harsh.

Holding the gun in one hand, he trots a half circle to the left of the thistles, doubles back on the far side, stops near where the deer came out, squats down, and sees several fresh
drops of blood on the ground. So, it was wounded—probably in the right rear flank, given the way it had pitched forward—and is heading deeper into the woods, through thick underbrush and rough terrain, hoping to tire its pursuer out.

John had hoped to down the deer with one bullet, then drag it quickly back to the trailer, afraid that a gunshot, even at this early hour and distance from town, might be overheard by someone—maybe a hiker in the preserve—and rouse suspicion. Now that he has wounded the animal, though, he has no choice but to pursue it. He can’t just let it limp off somewhere and die slowly.

He follows the trail of blood down the east side of the mountain on a zigzagging course through a stand of white oak undergrown with witch hazel, sumac, mountain laurel, and nettles that tear at his pants and shirt and painfully rake his face, until, after several hundred yards, the brush thins out and is interlarded with moss-slick rocks and vine-covered boulders. Here the buck has headed north, along a narrow ridge parallel to one fork of the hollow road a half mile below. For a few seconds, John hears in front of him the sound of the deer’s hooves clattering noisily against the rocks. It’s bleeding thin, sporadic drops, and John fears it might be a while before it gives out.

Winded, he stops for a short blow, looking east where the sun, now completely up, casts a gold trail from the far mountain to the near. A hawk circles over Cecil Nobie’s red house and barn, which look doll-sized from this height. The day vows to be perfect, if a little hot, but John doesn’t mind hot. He likes to sweat. Taking a deep breath of the warming air, he starts again after the deer.

After nearly an hour more of bushwhacking, he comes to a dry creek bed, crosses it, then follows the deer where it has veered right, up the hill again, toward the west boundary of the preserve. A steep half-hour climb through raspberry bushes and over clear-cut maples and white pine that have been sawed and left by the state brings him finally onto the back side of Hollenbachs’ mountain, where Old Man Hollenbach a dozen years before grazed heifers and sheep. Now the old pasture’s a maze of crab-apple trees, chokecherries, Scotch pine, and brambles, but at least the terrain levels out.

Holiday with the Best Man by Kate Hardy
Human by Hayley Camille
Black Halo by Sykes, Sam
The House of Mirth by Edith Wharton
Too Young to Kill by M. William Phelps
Thunder Snow (Thunder On The Mountain Series) by Foster, Mimi
Salem's Daughters by Stephen Tremp
The Art of Fielding: A Novel by Chad Harbach
The Other Woman's Shoes by Adele Parks
Finding Allie by Meli Raine