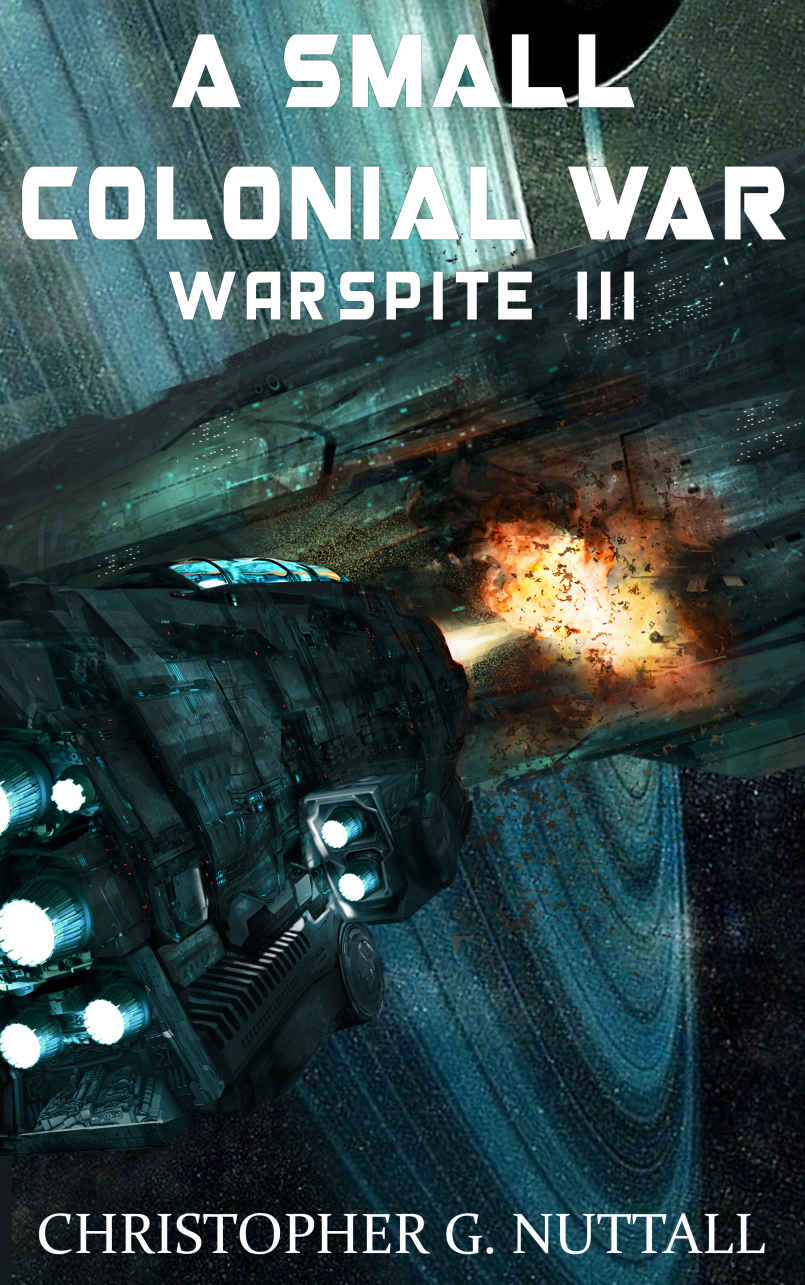 Indian ships have invaded three British-held systems and Indian troops have occupied British colonies, forcing Britain to choose between war and shame.  The Royal Navy, battered by the fires of the First Interstellar War and desperately trying to recover from the terrifying casualties, must launch a counterattack and recover the colonies.

For HMS
Warspite
- and a task force of British warships - the stakes have never been so high.  If the Royal Navy loses, Britain will be humiliated and the global power system will shift catastrophically, but even victory may come with too high a price.  Pushed to the limits, the Royal Navy must take the offensive and determine the outcome quickly ...

... Before the Indian gambit triggers off a civil war that will rip the human sphere apart.

To the men and women of the British Armed Forces.

“If you desire peace, prepare for war.”

With the benefit of hindsight, it is alarmingly clear that the Indians manipulated events on Vesy from the start.

They could not, of course, have
known
that HMS
Warspite
(and a handful of Russian deserters) would stumble across a planet of primitive aliens.  Despite the presence of tramlines within the system that lead to Indian-controlled systems, they were certainly unaware of Vesy, if only because they could have laid claim to the system themselves long before
Warspite
arrived.  However, the speed of their reaction - and their capture of Pegasus -- suggests they had a plan drawn up for military operations long before the start of the crisis, which was hastily updated when Vesy was discovered.  Vesy, therefore, merely provided an excuse.

I have to admit that they played their role masterfully.  While we - and the other Great Powers - attempted to deal carefully with the Vesy, the Indians met them as equals, dealt with them openly and offered unlimited supplies of weapons and ammunition.  Furthermore, it is now clear that the Indians
also
encouraged their Vesy allies to wage war on
our
Vesy allies.  The combination of weapons, technical advice, protection from orbital bombardment and the promise of much - much - more was decisive.  Our base on Vesy, Fort Knight, was effectively smashed and our position destroyed.  Captain Naiser’s decision to withdraw from the system cannot be faulted, at least on a tactical level.  However, it left the Indians in possession of the system and in a position to rapidly expand their grip on the sector.

Politically, their objective appears to be two-fold.  One: to secure acknowledgement of themselves as a Great Power, with all the rights and responsibilities claimed by the Big Five.  Two: to secure control over Vesy, Pegasus and Cromwell, thus allowing them to claim ownership of both their tramlines and the star systems beyond.  If left unchecked, the Indians will be in a position to dictate settlement of twelve known Earth-like worlds and untold numbers of stars and planets beyond.  Their grip on the chokepoints represented by the tramlines will be unshakable.

It goes without saying that we cannot allow this land grab on an interstellar scale to succeed, regardless of the cost.  The various treaties governing interstellar settlement are at risk.
We
claimed Pegasus, in line with the treaties; we
cannot
allow the Indians to invade and occupy the system permanently, if only to prevent other powers from trying to lay claim to Britannia, Nova Scotia and our other settled worlds.  This precedent, if allowed to stand, will undermine the basis of interstellar settlement for hundreds of years to come.

Furthermore, the Indians have committed acts of war.  They have killed - directly or indirectly - dozens of British personnel and civilians, as well as personnel from several different nations.  We cannot allow them to get away with their crimes.  It will make us look weak, unwilling to stand up for our interests - and, if we learned nothing else from the Age of Unrest, it was that weakness invites attack.  Indeed, the Indians would not have dared pick a fight with us before the First Interstellar War gravely weakened the Royal Navy.  With several other interstellar powers - if second-rank powers - girding their loins to overthrow the pre-war order, we cannot let this challenge go unanswered.

There is no room for a diplomatic solution.  This is not a dispute over just which party discovered a new system first, nor is it a skirmish over mining rights between a pair of asteroid miners.  The Indian occupation of Pegasus and
de facto
claim to Vesy is a naked act of aggression, cloaked in a tissue-thin set of justifications that have no mileage outside India itself.  Anything short of the recovery of Pegasus and the reopening of Vesy would be indistinguishable from allowing the Indians to get away with their actions.

The future of Britain as an independent spacefaring power is in doubt.  I look to the men and women of the Royal Navy to take the offensive and show the galaxy, once again, the fighting spirit that saved Britain from collapse and took our nation to heights undreamt of by our ancestors.

“You do realise this is a gamble?”

Prime Minister Mohandas Singh nodded, not bothering to turn away from the starchart to acknowledge the presence of Chaudhuri Bose, his Foreign Minister.  Bose had been a mistake in his opinion, a man forced on him by political realities.  He simply lacked the nerve to do what had to be done, while Mohandas - in his own opinion - knew all too well that there were times when one
needed
to gamble.  The future of India as an independent spacefaring power hung in the balance.

“I have sent the ultimatum to the British,” Bose said, when Mohandas made no response.  “It will not be long before they respond.”

He paused, significantly.  “Do you expect them to surrender without a fight?”

“They will be alone,” Mohandas said.  “The Americans are having their election, the French are too concerned about their internal politics to care about either Vesy or Clarke and the other Great Powers are neutral.  They will have to face us on their own.”

“They have more ships than us,” Bose pointed out.

“We have more
modern
ships,” Mohandas countered.  He swung round to scowl at the Foreign Minister.  Bose had simply never impressed him.  Like all diplomats, he was far too prepared to compromise with his fellows, making concessions just to get them to sign on the dotted line.  Hell, he even
wore
a western suit and shaved his beard.  “And they cannot afford to weaken themselves any further.”

He smiled at the thought.  It wasn't
pleasant
to admit that India owed her present position - a fair match for a Great Power for the first time in a century - to the first human-alien war, but it was true.  The Tadpoles had weakened
all
of the Great Powers, leaving them unable - and perhaps unwilling - to fight to maintain their supremacy.  If the British swallowed their pride and conceded the Indian demands, they would be weakened ... but if they fought, they would weaken themselves still further.  A victorious war would cost them badly at a time when neither they nor any of the other Great Powers could afford to be weakened.

“They may feel they will be challenged again, if they concede our demands,” Bose offered.

That
, Mohandas had to admit, was true.  If there was one lesson Britain - and the other Great Powers - had drawn from the Age of Unrest, it was that showing weakness was fatal.  They’d put that lesson to good use too, taking control of space and hammering any rogue state that showed itself inclined to cause trouble beyond its own borders.  Until the Tadpoles had shown themselves, the British military had been primarily involved in punitive strikes.

And we wouldn’t have risked taking the offensive before the war
, he thought, privately.
We would have lost the shooting match
.

It was a galling thought.  India had worked itself into a position of power after the British had withdrawn from India, only to lose it during the Age of Unrest.  The social unrest, the riots, the final war with Pakistan ... they had all cost India dearly.  They’d been slow to take advantage of new developments in drive technology and slower also to establish extra-solar colonies.  By the time India could reasonably call itself an interstellar power, the Great Powers were way ahead of it.  They’d flatly refused to grant India the honour of considering it another Great Power.

And it was something Mohandas wanted for India, wanted very much.

“We have a window of opportunity,” he said, flatly.  “Five years, perhaps ten ... the window will be closed.  Or we may have a second war with the Tadpoles.  We have to move now.”

He looked up at the starchart, thinking hard.  The original plan had been to take control of Clarke - before the British could turn it into a major colony - and demand Great Power status in recognition of the fact they could not be dislodged without a major war.  Mohandas would have happily returned Clarke to the British in exchange for that single concession, for the acknowledgement that India was completely independent of the rest of the human race.  But Vesy ... the discovery of Vesy had been a stroke of luck.  Now, India would not only control access to two whole sectors, but an entire alien race.  And who knew what the Vesy would become, given time?

But it also meant that British personnel were killed when we moved to secure Vesy
, he thought, grimly.
They may find it harder to back down
.

Bose cleared his throat.  “And if they do go to war?”

“Then they will have to rely on their navy against ours,” Mohandas said.  He studied the starchart for a long moment, silently calculating vectors.  It would take the British several months to put together a task force, if nothing else.  His men would have time to dig in ... if, of course, the British didn't concede defeat without a fight.  “And
we
will have more modern ships and the advantage of the interior defence.”

“I hope you’re right,” Bose said.  He made no attempt to hide the doubt in his voice.  “This could cost us everything.”

Mohandas nodded, curtly.  Bose was right.  It
could
cost India everything, although the Solar Treaty would ensure that losses were limited.  India would be humiliated, her extra-solar interests would be claimed by the British and her navy would be crippled.  They’d be the laughing stock of the planet.  Even the Tadpoles would be sniggering ...

But the prospect of victory was worth the risk.

“Keep talking to the other powers,” he ordered.  He rather doubted it would make much difference - the British were a Great Power, after all - but it was worth trying.  “Convince them, if you can, to put pressure on the British.”

And stay out of military affairs
, he added, silently.
This is no place for milksops
.

The Complete Works of Stephen Crane by Stephen Crane
The Sigil Blade by Jeff Wilson
Urchin and the Heartstone by M. I. McAllister
Ash Rising (DEAd Series) by Melissa Fox
Low Pressure by Sandra Brown
Ring of Light by Isobel Bird
Murder Your Darlings by Murphy, J.J.
You're a Horrible Person, But I Like You: The Believer Book of Advice by The Believer
Circle of Deception 2 by Skye, M.
Nuworld: Claiming Tara by Fitzgerald, Laurie