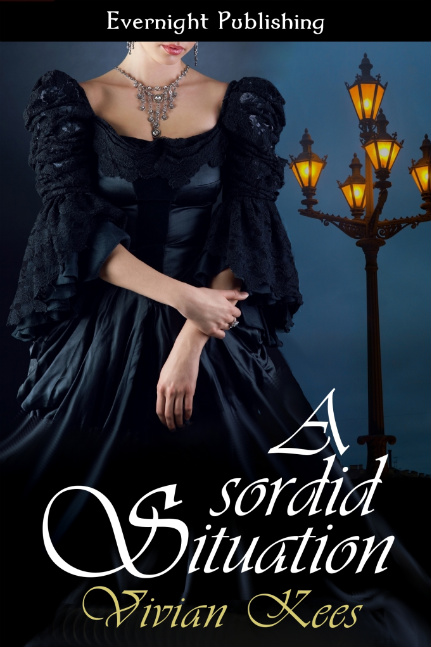 in print without written
permission, except in the case of brief quotations embodied in reviews.

For
Adam,
you were always the one.

Eugenia Wareham leaned forward in her chair, not believing the
words she’d just heard. “Come again? Surely I haven’t heard you correctly. Can
you repeat that?”

Randell Botsworth handed her a paper. “It’s all right there in
ink. I’ve known this for some time, but given the circumstances, we thought it
was in your best interest to delay telling you.”

Eugenia scanned the document. Debt, and so much of it. “How? When
did this happen? You’ll have to excuse me, Mr. Botsworth, but this is very
shocking to say the least. I wasn’t aware of any of this.”

Mr. Botsworth nodded his head. “Of course. I didn’t think you
were. William was a master at keeping secrets. It appears he had a penchant for
gambling and in particular, the many halls located in the west end of the city.
If you put two and two together, well…you can guess the rest.”

“The rest?” Her heart began to race.

“It’s all gone.” Mr. Botsworth let out a sigh. “I wish I could
offer you some words of comfort.”

Comfort? There is no
comfort in being penniless. What am I to do? Where will I go?
So many
questions bustled through her mind.

“How much time do I have? When do I have to vacate?” She had no
family to speak of and she doubted that she would be able to look to William’s
side. They had strongly opposed their marriage, given the vast age difference
between her and William. He was old enough to be her father.

“That’s not for me to decide. The new owner, a Mr. Cal Hawthorne,
I assume will be in touch with you. Everything is perfectly legal, and though
it may not seem right, Mr. Hawthorne has every right to come collecting. You
know I was fond of William, Eugenia, and I hate to speak ill of him and the
dead in general, but he should have told you all of this.”

Blame. It was too late to
lay blame.

“However, if Mr. Hawthorne is any sort of a gentleman, you should
be able to make an arrangement with him, to give you time to get your affairs
together. The word is he’s not an unreasonable man.”

“Perhaps,” she replied, her voice shaky.

She nodded and then bid him farewell.

“I will leave you the papers. They are of no further use to me.
Expect a visit from Mr. Hawthorne soon.”

Eugenia saw him to the door, and when she closed it behind him,
the prickle of tears overwhelmed her. Emotions rushed abound. Hurt and
frustration wafted over her in one gargantuan wave. How could William have
betrayed her? They’d formed a marriage built on trust, and now this? Was
everything a lie? She couldn’t help but imagine what other secrets he kept
during the past two years of their marriage.

Penniless.
She said the
word over and over until it echoed in her mind. This was a dream, a nightmare,
and at any moment she’d open her eyes. Everything would return to normal, and
she could just pretend none of it ever happened.

But this wasn’t a dream. It was reality. Her new found reality.

Eugenia raced up the staircase, mindful of her skirts until she
reached her bedroom, and slammed the door behind her. She needed to be alone,
needed time to think, to devise some sort of plan. Her future was precarious,
and there was no way she was going back to….

Never again. I’ll die before
I let it come down to that.

Eugenia worked hard for everything she had. William, the money,
the social status, none of it came without a struggle. And no one, not even Mr.
Cal Hawthorne himself would take it from her. Not now. Not ever!

Cal Hawthorne smiled with pleasure. Thumbing through his ledgers,
he mulled over the numbers. He did well this month, in fact, excellent. It had
been the best month yet, gaining his greatest acquisition, Collingwood House.

Of course, this meant evicting the widow of William Wareham, a
man so dim-witted, he’d gambled away his entire fortune in less than two years,
whilst taking out loans along the way in a half-assed attempt to cover himself.
The widow, apparently, was clueless in regard to her husband's proclivities in
the gambling world, or so people claimed.

He’d present her with the eviction papers, after all, one year
had passed since William’s death, and he allowed that given the circumstances
surrounding the whole affair. But the grace period was up, and now it was time
for him to take possession of what was rightfully his by law.

The land was worth more than the house, and being in a prime
location, he figured it would sell quickly once placed on the open market. In
the past couple of years, new money flooded the city, and real estate had risen
with the demand.

It was all legal and while many despised both him and his
business, he was doing nothing wrong.

stood up from the desk and stretched, before opening the top drawer in the desk.
He withdrew the brown folder and thumbed through the papers. Everything was in
order, perfectly organized with copies not only for him but also for the Widow
Wareham.

He tossed the folder back into the desk and locked the drawer,
tucking the key into his left vest pocket. Done for the day, tomorrow would
come soon enough and he needed his rest. He’d avoid the halls tonight in favor
of his bed. A tinge of emotion fluttered through his heart, and something from
deep within warned him, he was going to need all the rest he could get.

Relaxation found Eugenia that night in the form of whiskey. After
a few too many, she was ready to slip into bed.

In the darkness, the silvery glow from the moonlight filtered in
through the window, bathing her in an ethereal glow. Finally, she was able to
breathe, relaxed and shamelessly intoxicated from the alcohol. It was an
indescribable feeling. She wanted to laugh, just burst out with it, like some
madwoman. Yet, she fought the desire and let her thoughts drift elsewhere.

“William,” she whispered, “how could you?” Yet, try as she might,
she couldn’t despise or hate him. He’d rescued her. How could she dare feel
anything other than respect for him?

“Don’t be like me, girl,”
her mother had said over and over. “You don’t want this life of hardship. Do
whatever you have to do to get yourself out of the gutter.”
And she did,
taking that advice to heart.

At sixteen she was an orphan and soon after she’d found a way to
survive, it was far from respectable, but she did what was needed to get by.

Never again.
She turned
onto her right side.
I’ll die first…

It was a living, a way to earn her keep. The hall, the men, the
many men…. It was just a job, nothing more.

Eugenia closed her eyes. She wouldn’t think about that now. If she
did, sleep would never find her.

Imposing
came to
’s mind as he stood
on the front steps of Collingwood House.

It was a grandiose old structure, built more with yesteryear in
mind and keeping with the rich decadent style of the area.

He rang the doorbell once, waited a minute and when no one
answered, rang it once more. The loud iron bell resounded from within.

A severe-looking creature of advanced years, which he guessed was
a maid, peered at him through a minuscule crack in the door as she opened it.
“Yes? Can I help you, sir?”

“I’m here to see Mrs. Wareham. We have important business to
discuss.”

“Well, I can assure you, she isn’t expecting you or anyone else
today.” She opened the door and directed him to step inside. “I’ll tell her
you’re here. Do you have a name?”

She raised a brow. “Just a moment. I’ll see if she’s available.”

The chilly woman stalked off with her back so impeccably
straight, he couldn’t imagine her bending for anything. A moment later, she was
back. “Your coat and hat—” she held out her hand, waiting impatiently “—I will
take.”
quickly removed the requested items and watched as she hung his coat and hat on
a large rack. “And if you would, follow me.”

Rich
, he thought,
walking down the hall behind the maid. He never fathomed that William had been
so well off. And to think, this was all his now.

entered the parlor. A woman sat in a high back chair in front of the fireplace.
She glanced up at him from her sewing and motioned for him to sit across from
her in the other matching chair. Not one word was spoken between them.

With leather satchel in hand, he sat down, gripping it tightly.

“I’ve been expecting you,” she said, breaking the silence. “I
knew it was just a matter of time.”

She was a lovely dark haired creature, young, petite and not at
all what he had expected. William Wareham was a man of advanced years. His
death notice had listed him as being fifty-two years of age. But this woman,
she couldn’t have been a day over twenty-one.

“Your maid says differently.” He was lost for words; his mind had
raced for those four.

“Let’s cut with the formalities, shall we? I know who you are,
and you know me. We both know why you’re here.”