Read A Strange There After Online

A Strange There After 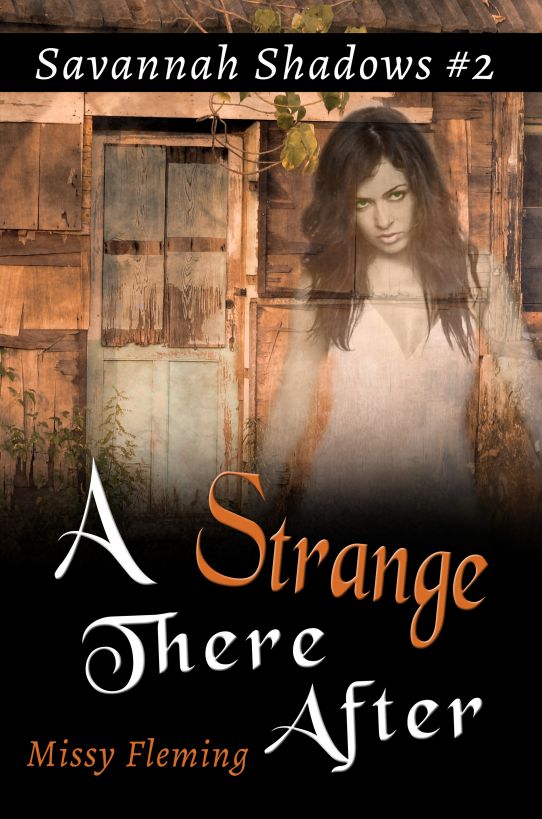 A Strange There After
Savannah Shadows #2
by Missy
Fleming

A Strange There After, Copyright
2014 Missy Fleming

A Strange There After

Ghosts exist. Quinn Roberts knows this
because she is one - kind of. The spirit of a dysfunctional
ancestor, Catherine, has evicted Quinn from her own body, forcing
her to live in a world with the paranormal. No one can see, touch
or hear her, except the ghosts she grew up with and the bane of her
existence, a self-centered paranormal investigator named Boone.

Forced to watch the growing bond between her
boyfriend, Jason, and the body snatcher, Catherine, Quinn delves
deeper into the history of her family in search of a way to reverse
what's been done. What she finds is a dangerous entity more
terrifying than anything she's encountered before. He's willing to
grant all her desires...for a price.

As Quinn faces painful decisions and makes
unlikely alliances, she learns how far she will go to get her life
back. Desperation is a wicked thing and she soon realizes that
recovering her body may only be the beginning of her end.

To my family—real, writing, and publishing.
I love you all.

"A
Strange There After"

Nightmares proved to be my new companion.
They stalked at my heels, even in the light of day, dragging me
into a never-ending abyss of uncertainty. They tried to teach me
about what I lost, but I failed to put the puzzle together. Pieces
lay within my reach, and each time I came close to seeing the whole
picture, terror ran its icy fingers down my spine. Fear took hold,
a grip so fierce I questioned whether I would ever find my way out.
Every day, I struggled to shake off the cloud of confusion hanging
over me.

Even as I gazed over at the attic window, a
terrible dream danced along the edges of my consciousness, too far
out of reach to recall. A bluebird flitted under the eave, on the
other side of the glass, distracting me and pulling a smile from my
lips. The beautiful morning stretched across the treetops, coloring
the world golden, and the sight chased away any lingering memory of
my haunting dreams.

Sunlight streamed in through the opposite
window, illuminating my sparse accommodations. Stretching, and
drawing in a deep breath, I sat up, eager to start the day, and
cringed as the room spun. Once I steadied myself, I pushed to my
feet and padded toward the door. Glancing down, I frowned. Must
have fallen asleep in my clothes again. The jeans and tank top were
incredibly wrinkled.

At the bottom of the stairs leading up to my
room, I stopped to listen. Nothing moved, and the lack of sound
gave the second floor an empty feeling. Passing a vacant bedroom,
which used to belong to my stepsister, Anna, I tried to remember
when she and Suzie and Marietta moved out. They had, hadn’t they?
Sleeping in the attic was obviously a hard habit to break. I needed
to work on it.

As I descended the main staircase, I shook
out my long hair and gathered it into a ponytail. Stifling a yawn,
I veered straight for the kitchen, on a mission to get some much
needed caffeine. When I reached my destination, the sight of Jason
Parker, in faded jeans and a fitted T-shirt, cleared my fogginess.
He had swept me off my reluctant feet three months ago, and it
didn’t matter that he was twenty-one, three years older than me, or
that he lived in California. Jason had helped me open up in a way I
never allowed myself before. A flutter of affection beat its wings
in my stomach. He set a box of donuts and to-go tray of coffee on
the counter. The scent of mocha and sugar drifted over, and my
mouth started watering.

“Oh, Lord, it smells delicious,” I said,
loving how the sun shone through the wide window of the dining nook
and highlighted his dark hair. He busied himself with pulling out
plates and humming, the movements causing the muscles in his back
to flex. I moved closer, intending to run my hand over his
shoulders, to feel his strength, but he rounded the counter.

He didn’t answer me, just sat down on the
stool and grabbed some napkins from a nearby wire basket.

“If Mr. Movie Star doesn’t want an elephant
for a girlfriend, you need to stop bringing me treats.”

My joke fell flat. It didn’t even garner a
reaction from him, not so much as a raise of a brow or twitch on
his lips. Positive he must not have heard me, I closed the distance
between us and tried again.

“Did you have a shoot last night?”

He filmed mostly at night, the lead in a
vampire movie based on some popular book series. The locations
usually attracted a slew of giggling girls, creating chaos and
hysteria as they all strained to catch sight of Jason.

My question went unanswered, but a smile
teased his lips when he opened the box of donuts and pulled out a
maple bar covered in sprinkles. He must have remembered they were
my favorite.

“How many did you get me?” I asked, reaching
out to tip the lid of the box up.

A gust of wind swirling through the kitchen
stopped me. It ruffled my hair and drove a dreadful chill right
through to my bones. The back door was shut, the windows closed,
but I felt the need to wrap my arms protectively around myself.
Panic fluttered in my chest, and I fought against the lump forming
in my throat. Not even Jason’s presence comforted me.

From the corner of my eyes a shadow startled
me, and I whirled around. She strolled into the kitchen, stealing
my breath, her long black and purple hair shimmering in the morning
light. Her brown eyes widened in happiness when she caught sight of
Jason, her lips parting in surprise.

“I didn’t know you were coming over. Am I
going to regret giving you a key?” she teased. “Breakfast smells
yummy,”

This time, Jason responded. He walked over
and caught her in a fierce embrace, lifting her off the ground. She
giggled in response. My stomach quivered as I watched him press his
lips to hers. To mine. Except I was standing there unnoticed,
completely unseen. My world came crashing down around me.

I remembered everything in broken, painful
fragments. My stepmother and sister’s endless taunts. Meeting Jason
and opening up to him. The graveyard and trying to rid my
stepmother Marietta of the shadow attached to her. Catherine
somehow pushing me out of my body. Looking in the window, watching
Jason kiss
her
as I stood alone and cold.

For some reason, I occasionally woke up and
forgot I was a ghost. Obviously, I needed to write it on a sticky
note and tape it to my forehead. The only issue being I didn’t have
a clue what I really was. Amidst the pain rolling through me a
single detail rooted me to the moment. My heartbeat was gone, my
chest motionless. I called myself a ghost, but I hadn’t died. My
body wasn’t buried or burned. It lived. I was staring right at it
as Jason pressed his mouth to hers. My own tingled in reaction,
and, with trembling fingers, I caressed my lips. He gently tugged
on her hair, and my scalp pricked.

I experienced a milder sensation of
everything he did to her. My stomach rolled in disgust.

Catherine. Somehow the wench forced me out of
my own body.

“What’s going on?” I demanded.

Neither of them reacted to the sound of my
voice.

Finally, the kissing stopped, but the warmth
lingered on my lips, in my chest. She didn’t only return the
action. She enjoyed it. I knew because I felt the rush of her
affection course through me, flushing my skin and making my blood
hum. I remembered the feeling. It was identical to what I
experienced when he used to embrace me, when he stared at me with
those captivating eyes.

My rage replaced her lust-filled reaction. I
advanced on them as Jason leaned against the counter, settling
Catherine between his legs and brushing hair from her face.
Jealousy blossomed in my chest. This wasn’t normal heartbreak. A
lance pierced my heart, stealing my breath and hollowing me to the
core.

The smile on my face wasn’t mine. It was
Catherine’s, full of easygoing confidence. As I studied them, I had
to admit they looked good together, a picture of youthful
perfection. His dark hair and gorgeous brown eyes matched her
black, wavy tresses and happy smile.

She stole my life.

Moping like a lovesick fool wasn’t going to
get me anywhere. I had to fight. My entire life I’d been aware of
the presence of ghosts. I felt their pain. What I didn’t understand
was why they clung to their wrongs and stayed behind. Even
Catherine let the hatred twist her. It changed her into a woman
hell bent on revenge for a hundred and fifty year old misdeed. I
understood all too well now. The pain never left. Time didn’t
exist. Wounds remained fresh.

Briefly meeting my tortured gaze, Catherine
put on a show for me, giggling and kissing Jason more passionately
than necessary this early in the morning. My eyes narrowed into
angry slits as I fought the spirit world calling out to me. I
refused to let the fog back in, to cloud the truth and numb my
pain.

Oblivious to my torment, Jason brushed his
thumb across her lips. “I can’t stay long. Gonna get some sleep
before I have to be back on set. I’ll make sure to reserve a few
hours for you later though.”

“Can’t wait. This house ain’t the same
without you.”

She sounded nervous, awkward, how I usually
did, and I gave her credit for how well she played me. Her grandest
role yet.

“It must be hard being here alone.” He laced
his fingers behind her, settling them in the small of her back.
“Have you heard anything about Marietta?”

I perked up at the mention of my
stepmother.

“Not really, not since they settled in
Atlanta. I imagine Anna is worried about helping her mama get
better, not keeping in touch.”

The Temple of Gold by William Goldman
Angels of Detroit by Christopher Hebert
One Monday We Killed Them All by John D. MacDonald
Fragile Cord by Emma Salisbury
The Funhouse by Dean Koontz
Be Careful What You Wish For by Jordan, Simon
Lucky Love by Nicola Marsh
The Corpse With the Golden Nose by Cathy Ace
Michaela Thompson - Florida Panhandle 02 - Riptide by Michaela Thompson
Asher: A Second Chance Novel by Walker, Kylie