Read A Sweet and Spicy Kind Of Love Online

A Sweet and Spicy Kind Of Love 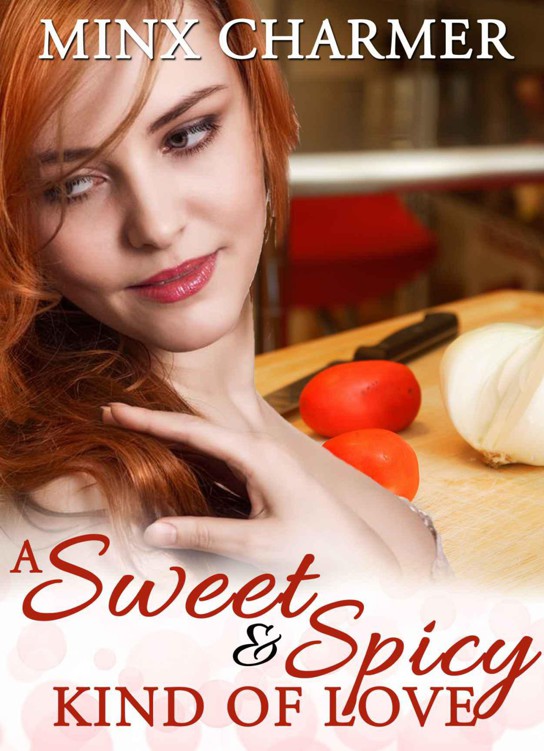 A Sweet and Spicy Kind of Love

For questions and comments about this book, please contact us at
[email protected]

For book updates, check out
Facebook.com/BlueRibbonBooks

On a Monday morning lots of things could go wrong, and sitting on the back of a runaway horse had to be one of them. As a terrified Molly Makepeace clutched her shaky hands to the bridle of the galloping steed, her heart pounded furiously against her white, cotton shirt. And her mind flashed back to the moment she knew the day would not end as lovely as it had begun…

When Molly arrived at the Sunnyvale east primary school, the sun was shining brightly, but a cool breeze tempered its warmth. Inside the classroom all of the students and especially Molly’s close friends chattered with anticipation, and Molly joined right in. The school fieldtrip which had been planned for the past month had finally come, and they were eager to get started.

Molly was more than ready and she couldn’t wait to get on the road. She was a feisty, young girl with a heart shaped face, deep hazel eyes, a generous mouth, a shock of unruly, red hair falling all over her face and a smattering of freckles over her small nose. She was about a foot taller than most of her peers, with a well rounded figure to match. But Molly’s passion was adventure and the fieldtrip was something she had dreamt about, ever since it was announced in class by Ms. Grant, their teacher.

When the group arrived at the Devonshire Ranch, Molly was the first to get off the yellow school bus, and run into the house to greet Mr. Devonshire. The L shaped home gave an air of openness with a low, tiled roof over high, arched windows, with rustic trimmings and a rock entrance. The inside was simply furnished but homey, and smelled of baked cookies. Molly sniffed the air in appreciation as she searched for Mr. Devonshire.  When she found him in the dining room she ran over and hugged him tightly, thanking him for allowing the school to visit once more. This was the fourth time the group of twelve students had been at the ranch.

Mr. Devonshire’s slim frame and kind gray eyes twinkled under his black cowboy hat as he looked Molly over. “My goodness gracious girl, but you are growing. Tell your mother that I send my regards and thank her for the cherry pie she made last week. It sure was good just like my Martha’s used to be.”

Molly smiled with affection. The rancher had just lost his wife about a year before, and dearly missed her baking.  “No problem sir. My mother will be glad to hear it. We haven’t seen you at the school lately, but the money you sent for the science fair helped us to get our supplies together.”

Mr. Devonshire nodded as he patted Molly affectionately on her red hair. “Bless your heart dear. There is only so much happiness a seventy five year old man can look forward to, and I am so glad that I can help you kids out. Hope you are ready for an adventurous day?”

Molly squealed with delight. With a beaming face she skipped around the rancher as she clapped her hands.

“Am I ever? Where do we start? Do we do a tour around the wishing well like the last time? What about the far field where those huge rocks that look like cooking pots are hidden and what about those horses of yours? I can’t wait to…”

Mr. Devonshire placed his hands against Molly’s arms in an effort to stem her enthusiasm. “Whoa now little one. I am too old to keep up with your skipping about. We will get there soon enough. For the moment, let’s meet with the others and then we will see what we can do.”

As they rejoined the group, Molly was still keen with anticipation when she heard the excited whisperings of her fellow students, as though some great secret had been discovered. Even her friends were locked in a circle with giggles and furtive glances over their shoulders. Before Molly could ask what was going on, she saw the gleaming silver Bentley parked on the side of the school bus.  When the passenger door opened and Julian Chambers stepped outside into the warm sunny air, Molly felt her heart fall to the floor and land at her feet. It was him!

Her heartbeat increased threefold, and she felt her breath catch somewhere in the vicinity of her chest. Julian Chambers was in Molly’s view, the most perfect boy with the handsomest face she had ever seen. He was taller than her by almost a foot, and his slim physique was beginning to show the muscular signs of the man he would become.

His green eyes reflected a mixture of wit and amusement usually at the expense of others, but his brain power was quite formidable. Each day he distinguished himself more and more in the school, and no one could keep up with him. Molly did not understand what he was doing in the seventh grade, but didn’t have the nerve to ask him why.

There was only one thing she knew for certain.  That somehow, someway, Julian would be a part of her life. The only complicated part of that plan was getting him to notice her and that is where the runaway horse came in.

When they made their way to the stables the students quickly greeted all of the horses, with a piece of apple courtesy of Mr. Devonshire. Most of them grew bored after a few minutes, and left the corral in search of the outdoors. Even Molly’s girlfriends ran outside with a call for her to join them “C’mon Molly. Join us out by the cherry blossom trees.”

Molly waved them on. She had to do something first. “I’m coming girls. I just want to see this last horse.”

When Molly got to the end stall, she read the name with a smile as she turned to the Mr. Devonshire “Sweetums? You named a horse Sweetums? That is too cute.”

“Yes it is rather cute, but she can be a handful.”

Molly ignored the warning and turned back to the animal as she cooed softly. “You are not bad are you cutie? You just need the right person to appreciate your feisty spirit, that’s all.”

The horse snorted and eyed her warily. Pawing at the ground it turned its head to the wall, but Molly was not deterred. With a booming laugh, she put her hand out and tried to pull on Sweetum’s mane to rub her shiny nose. The horse tossed its head back and forth as it tried to avoid the touch of her soft hands. “Come now Sweetums. Be still. I just want to pet you.” Leaning as close to the animal as possible Molly whispered “I am just trying to impress someone so can you please help me out?”

Sweetums snorted as if in disbelief, and rolled her head from side to side. Molly did not notice her cantankerous behavior as she was busy glancing around as discretely as she could. When she spotted Julian two stalls down, she shivered with delight. Perfect! He hadn’t left with the others and would be next to her in no time. Thinking quickly she turned to the rancher with an impish smile “Mr. Devonshire, I want to ride her please. Can you get her all fixed up for me?”

The rancher shook his head with a worrying expression. “No Molly my girl. This is not a good idea. Sweetums may have a nice name, but she can be a devilish ride. Let me get you a softer mount who is better trained and knows how to behave. Give me a minute and I’ll set it up for you.”

As she watched the rancher’s retreating figure, Molly bit the edge of her lip. This would not do. She was going to ride this horse and not any other, that way Julian would see what a fine horsewoman she was. It didn’t matter that she had only rode a handful of times before. Surely that was enough experience to handle anything Sweetums would throw at her. The only thing to do was saddle the animal before Mr. Devonshire returned, but she could not do it alone.

Quickly Molly ran in search of a ranch hand and found one near the corral. With a mischievous twinkle in her eyes, she spoke with as much authority as she could muster. “Hello there! I need you to get Sweetums all saddled up for me, and not to worry I have the rancher’s permission to ride her. The quicker the better please.”

The helper glared at Molly and mumbled something under his breath about school girls causing too much ruckus, but Molly would have none of it. She just hoped Julian was watching her display of sportsmanship.

She caught her breath when she realized she was right. Julian was watching them. Having followed her out of the stall, he observed her interaction with the ranch hand with his usual smile of quiet amusement. Molly did not care what expression he had, as long as he had one.

When the horse was fully saddled, Molly smiled prettily and assured the ranch hand that all would be well, and when he helped her up she nodded gracefully as a thank you for his assistance.

“Everything will be fine. I am just going to borrow Sweetums for a moment, and I will bring her right back. Tell Mr. Devonshire that I appreciate his kindness to get another horse but this horse is the girl for me.”

In hindsight Molly guessed that Sweetums disagreed with her confident words, and the proof was the horse’s immediate reaction. One minute she was standing still and neighing softly, and then four powerful legs took off, and ate up the ground with increasing speed.

Molly barely had a moment to catch her breath before she realized Sweetums was running away with her.

The chaotic scene left in Molly’s wake was even more impressive than the sudden bolt of the steed.  Loud wailing tears from fellow classmates coupled with frantic whispers, threatened to reduce the field trip into chaos and confusion. Five girls cried blue murder, and screamed for their teacher to come and save Molly from certain death.

Yolanda Madison whom Julian knew to be Molly’s best friend was the loudest wailer, and her high pitched voice echoed over the area with a shrill cry for aid. “Ms. Grant, oh heavens Ms. Grant! Come and save her, call the marines, call the police, call 911, call the guards, call someone to come and rescue Molly. The horse is gone and we don’t know how to ride the animals to go after her. And the rancher is still gone and Molly is probably dead by now. Please Ms. Grant, do something.”