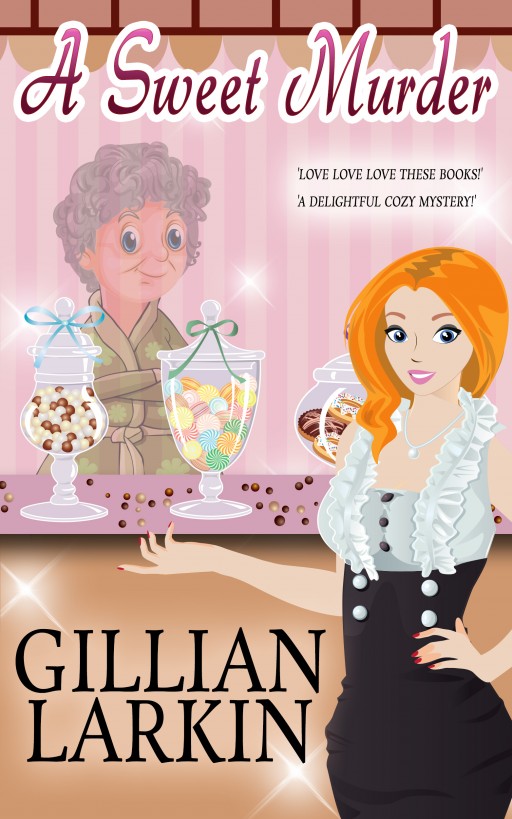 Front
cover by the amazing San at:

To
hear about my free books and special offers sign up at:

“
So,
Grace, it’s going to be a different kind of auction today, there
will be more commercial items and I was thinking ... Grace, Grace?
Are you listening?”

Grace tore her
gaze from the passenger window and looked over at her brother.
“What?”

Frankie sighed.
“I was telling you about this auction today, about it being ...
you’re not listening again! What’s so fascinating out there? What
are you looking at?”

Grace pressed
her face closer to the window. There must be one round here, it was
a built-up area, there were lots of children about. Hang on, what’s
that on the corner?

Grace banged her
hand on the door and cried out, “Frankie! Stop!”

Frankie slammed
on the brakes, the van swerved as it came to a screeching stop. Car
horns blared behind them.

Frankie looked
at Grace, his face white. “What? What did you see? Have I just run
over something?”

Grace threw a
distracted look at him. “What? No. I won’t be a minute.”

She opened the
door and jumped out. She ran towards the corner shop that she had
spotted and disappeared inside.

Frankie didn’t
look happy as she returned to the van a few minutes later. He
glared at her and slowly said, “You made me stop for a shop? Is
that what the emergency was? Grace! I could have crashed the van,
it’s not built for emergency stops. What did you urgently have to
buy from that shop?”

Grace pulled her
seat belt around herself and fastened it. With a grin she held up a
paper bag. “Coconut mushrooms! My favourite, I haven’t had them for
years. I’ve had a real craving for them all morning.”

Grace couldn’t
answer, she had stuffed four of the soft sweets into her mouth all
at once. Frankie reached out for the bag, she slapped his hand away
and pulled the bag protectively towards her.

Frankie looked
at her for a few seconds, his look suddenly softened. He said, “Are
you feeling all right? I know the anniversary hit you hard. You can
go and buy more sweets if you like, I don’t mind
waiting.”

Grace swallowed
the chewed up concoction. “I’m fine, I just fancied some sweets.”
She offered the bag to him. “You can have one, one – not
two.”

Frankie gave her
a sympathetic smile and said, “You keep them. Let’s get going, the
auction will be starting soon.”

He pulled out
into the traffic. Grace picked up another sweet and popped it into
her mouth. She knew what he was thinking. He thought she was upset
about the anniversary of her parents’ deaths, it was one year ago
last Wednesday that they had died in a car accident. She had taken
the day off work and gone to visit their graves. She had cried for
a while in the safety of her home. But she was okay, she was
dealing with her grief, it wasn’t on her mind all the time now. She
had other things to think about.

Another coconut
mushroom found its way into her mouth. She had a niggling feeling
about this sudden urge for sweets, this craving that had appeared
this morning.

Grace lurched
forward as the van made another emergency stop.

The colour had
drained from Frankie’s face again. He gave her a horrified look.
“You said you had a craving! I know what that means. Grace, you’re
pregnant! How could you? I’m too young to be an uncle! Who’s the
father? Is he going to marry you? Where does he live? I’ll go and
sort him out.”

Grace was
touched by her brother’s concern, but if he paid any attention to
her non-existent social life he’d know the possibility of her being
pregnant was, well, impossible.

She said, “I’m
not pregnant, Frankie, calm down.”

Frankie let out
a sigh of relief. “You let me know if you’re thinking about it,
won’t you?”

Grace gave him a
dutiful nod. As if!

As Frankie
pulled back into the traffic he said, “You’d better take it easy on
those sweets, any more and you’ll look pregnant. You know how easy
you pile on weight, you’re like a human balloon. Right, let’s talk
about the auction.”

Grace ignored
his insult, he always talked to her in that way, he didn’t even
realise he was insulting her. She didn’t mind, he was the only
family she had left and he’d taken care of her after Mum and Dad
had died. If it wasn’t for him she wasn’t sure what state she’d be
in.

Frankie wittered
on about the auction. She didn’t pay him much attention, her mind
was elsewhere. She reached for another sweet. Her rummaging hand
couldn’t find one.

Had she eaten
them all? So quickly? That wasn’t like her at all.

Frankie pulled
into the auction site.

Grace knew why
she was feeling like this. She was being influenced by a ghost. A
ghost that needed her help. And that ghost was here at this
auction, located somewhere inside one of the storage
lockers.

Furthermore,
Grace knew without doubt that the ghost was that of a person who
had been murdered.

Ever since the
accident that had claimed her parents’ lives, and nearly her own,
Grace had been able to see ghosts. She had mostly seen them inside
storage lockers, they were usually attached to items inside the
locker. The first ghost, Jacob, had asked for Grace’s help and
since then she had been more than happy to help other ghosts with
any unfinished business that they had.

Lately, Grace
had helped ghosts that had been murdered. At first, she wasn’t sure
if she was strong enough to deal with some of the ghosts’ issues
but she had surprised herself with her inner strength. And there
was a great deal of satisfaction in bringing a murderer to justice,
especially those that thought they had got away with it.

Frankie pulled
into a parking space. He nodded towards the crowd of buyers waiting
by the lockers. “It’s a different bunch today, more serious
looking, they have more cash. We’ll have to play clever if we’re
going to get anything today.” He looked back at her and tutted.
“You’ve got coconut on your chin.”

Grace quickly
moved her hand over her chin. If she was at home she would have
licked the flakes off. She said, “I don’t understand why we’re
here. We don’t need any commercial items in the shop, I thought we
were concentrating on antiques and household items.”

“
I
knew you weren’t listening, I just told you in the van.”

Frankie got out
of the van, Grace did the same. She said, “Sorry, Frankie, tell me
again.”

He locked the
van and headed towards the office, Grace walked at his side. He
explained, “There’s a market for second-hand stuff like office
tables and chairs, people can’t always afford new stuff. I’m hoping
to buy stuff cheap, get it up on the website and sell it quickly.
I’ve been looking into it, there’s money to be made.” He looked
back at the buyers. “Seems I’m not the only one with that
idea.”

Grace opened the
door to the office just before Frankie walked into it. “Watch where
you’re going,” she said. “I’m sure you’ll do well today, you’ve got
a secret weapon.”

Frankie stepped
into the office. “Secret weapon? I hope you don’t mean you. No
offence but you’re rubbish at these auctions. Remember that pile of
crap you bought a few months ago? I was embarrassed for you. Let me
do the bidding.”

Grace remembered
the ‘pile of crap’. She’d had to buy it, the ghost of a man was
attached to a particular item. She helped him even though he was
quite obnoxious. It seemed that death didn’t make a person
mellow.

“
I
wasn’t talking about me, and yes, by the way, I am offended. I
meant your hero. You know how he looks out for you.”

Frankie froze.
Grace bumped into him. He slowly turned his head to look at her. In
a whisper he said, “Are you saying what I think you’re saying?
Don’t mess with me, Grace, I can’t take it.”

Grace grinned at
him. She felt the urge to tease him a little, just like when they
were children. But no, she couldn’t do that to him. She said, “I
saw him, at the far side of the lockers.”

Frankie grabbed
her arm, his look was intent. “Are you sure? Sure it was
him?”

Frankie released
his grip. He scanned the office and frowned. He walked back to the
office door and stared through the window. “I can’t see him! Grace,
are you absolutely sure?”

Grace walked to
his side and in a sing-song voice she said, “He’s behind
you!”

Grace studied
her brother. It was fascinating to see the change come over him.
Even though he was older than her, the look that he now had on his
face made him appear years younger. He looked as if all his dreams
had suddenly come true, as if Santa himself was standing in front
of him with a sack full of toys, all with Frankie’s name on
them.

The object of
his affection beamed at them from behind the office desk. “Frankie!
Grace! So good to see you! How’ve you been? How’s your business
doing?”

Grace gave
Frankie a sideways glance, he was obviously incapable of speech at
the moment so Grace spoke for him. “Hi, Sylvester. We’re fine,
thanks. How are you? We haven’t seen you at the auctions for
months. Frankie was worried that you’d gone back to live in
America. The auctions haven’t been the same without
you.”

Sylvester Sylver
laughed, showing even more of his perfect white teeth. His tanned
skin looked unreal next to his pale office assistant. His
swept-back silver hair made him look like an older version of Elvis
Presley. The turned-up collar of his silk blue shirt completed the
effect. Grace always had the feeling that he was about to burst
into song.

He said, “I did
go back to the States, they needed me to do some auctioneer work
there. I loved being in the sun again but I missed you guys and
your eternal optimism.”

Grace felt her
eyebrows rise. Was he talking about British people?
Really?

Sylvester tapped
the side of his nose and said, “Don’t tell anyone this but I
actually missed your tea! I thought I was a coffee man through and
through but this little island has converted me! Is Frankie okay?
He hasn’t moved. Hey! Frankie!”

Frankie blinked
and came out of his stupor. He took a few steps closer to his idol.
In a quiet voice he said, “Are you doing the auction today? Are you
doing more auctions? Are you living back here?”

Grace could hear
the rising panic in his voice, it was almost
stalker-like.

Sylvester
appeared not to notice it, or perhaps he was used to it, being the
star that he was. He looked at his watch. “We’re just about to
start with the first locker. I’ll wait while you sign
in.”

Frankie gave him
a grateful smile. Grace tried to control her eyes from rolling.
Frankie had met Sylvester Sylver in the flesh many times, when was
he going to act normally in front of him?

Grace’s mouth
suddenly watered, a dribble of saliva escaped and ran down her
chin. She wiped it away and hoped that no one had noticed it. She
looked around the office. She soon saw what had caused her mouth to
water.

Grace waited for
Frankie to sign the bidders’ register. Her gaze was constantly
drawn to the side of the room, her mouth watered alarmingly. She
was faintly aware of Frankie and Sylvester talking as she wiped
more dribble from the corners of her mouth.