Read A Thousand Tomorrows & Just Beyond the Clouds Omnibus Online

A Thousand Tomorrows & Just Beyond the Clouds Omnibus 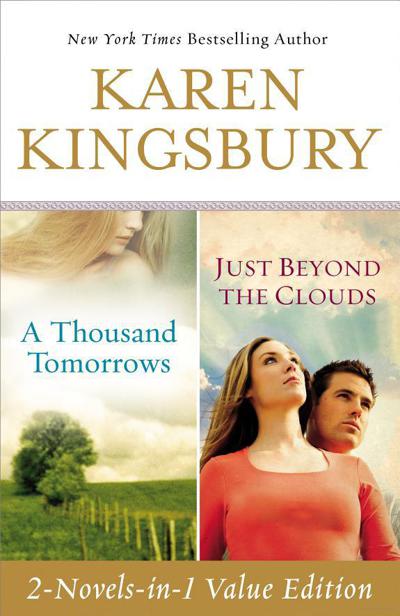 Just Beyond the Clouds

Donald, my Prince Charming: The dance is a beautiful one; I only wish the music would play forever.

Kelsey, my forever laughter: Thanks for letting me into the most tender places of your heart.

Tyler, my sweetest song: When the spotlight hits you, honey, your dad and I will be there in the front row.

Sean, my silly heart: It feels like you’ve been in my heart forever.

Josh, my gentle giant: Our plan was two adopted Haitian boys; God’s plan was three. I’m so glad He brought you to us.

EJ, my chosen one: Watching you come into your own, growing and stretching with the years, has been one of my greatest blessings.

Austin, my miracle boy: Your days are speeding by, precious youngest child. I can’t slow the march of time, but you remind me I can savor every beat.

And to God Almighty, the Author of Life, who has—for now—blessed me with these.

Novels do not come together without a great deal of help. For that reason, I’d like to thank several people who helped make
A Thousand Tomorrows
possible.

First, a special thanks to Maureen Egen and Rolf Zettersten for taking me under your wing at Center Street and believing that maybe the whole world needed to know about this story. Your encouragement and faith in me have made all the difference. I appreciate you more than you know. Also, a thanks to my other friends at Center Street, especially my editor, Leslie Peterson, and my publicist, Andrea Davis. You are amazing in the way you think outside the box. I’m grateful beyond measure to be working with you.

Also, thanks to the people who helped lend credibility to this novel. A year ago, I shared a cross-country airplane ride with professional bull rider Ross Coleman. That four-hour conversation became the inspiration for Cody Gunner, the main character in
A Thousand Tomorrows
. Since that
conversation, Ross Coleman and his family, along with dozens of rodeo competitors, cowboys, and professional bull riders including the all-time great Tuff Hedeman, helped make the world of rodeo real to me, and for that I am grateful. You lent accuracy to this story; any errors in detail are mine.

In addition, a thanks to those who shared their cystic fibrosis stories and information. I join you in praying for a cure for this disease, and for believing that in time research and funding will continue to add tomorrows every day.

Thank you to my family, especially Donald and the kids, who don’t mind tuna sandwiches and quesadillas two weeks straight when I’m on deadline. You’re the best support system I could ever have! Thanks also to my mother, Anne Kingsbury, who is my assistant and best friend. And a thanks to my dad, Ted Kingsbury, who continues to be my greatest encourager.

In addition I’d like to thank my friends and family who surround me with love and prayer and encouragement, especially Susan Kane, Trish Kingsbury, Lynne Groten, Ann Hudson, Sylvia Wallgren, Sonya Fitzpatrick, Teresa Thacker, Kathy Santschi, Melinda Chapman, Christine Wessel, Vicki and Randy Graves, Marcia Bender, and so many others.

A special thanks to my agent, Rick Christian, at Alive Communications. You are brilliant at all you do, acting in so many roles as you lead me in this writing adventure. You care deeply about my career, but more than that, you care about me in my role as a wife and mother. Thanks for working out the details with that in mind. You’re amazing, and I’m the most thankful author in the world to be working with you.

She became Mike Gunner’s wife the summer of 1972, back when love was all the world needed, big enough to solve any problem. So big no one imagined it might end or die or drop off suddenly the way the muddy Mississippi River did ten yards out.

The wedding was small, held on a hillside in Oxford not far from Ole Miss, a stone’s throw from the grassy football field where Mike had been king. Marriage, they told themselves, wouldn’t mean losing their independence. They were just adding another layer to their relationship, something more diverse, more complex. As a reminder, during the ceremony they each held something that symbolized themselves—Mary, a book of poetry; Mike, a football.

Looking back that should’ve been a sign, because football was Mike’s first love, and what sort of man could be married
to two lovers? But at the time—with half the guests in flowing tie-dyed gowns and flower wreaths—holding a football and a book of poetry seemed hip and new, a spit in the face of tradition and marital bondage. No three-piece suits and starched aprons for Mike and Mary.

Mike had an NFL contract with the Atlanta Falcons, and a pretty new house a few miles from the stadium. Mary was a runaway, so leaving Biloxi meant cutting ties that were already frayed. They would live as one, him in a Falcons uniform, her with a pen and paper, ready to capture the deep phrases and rhymes that grew in the soil of her heart.

Babies? They would wait five years at least. Maybe ten. She was only nineteen, a child herself. Marriage would mean finding new and heightened ways to love each other. Sundays cheering from the stands while her husband blazed a trail down the football field, and lazy Tuesdays, barefoot and sipping coffee while she recited to him her latest creation.

That was the plan, anyway.

But God didn’t get the memo, because Mary was pregnant three months later and gave birth to a baby boy shortly before their first anniversary. Cody William Gunner, they called him. Little Codester. Mary put away the pen and paper and bought a rocking chair. She spent her days and most nights walking a crying baby, heating up bottles, and changing diapers.

“Sorry I’m not around more,” Mike told her. He wasn’t used to babies. Besides, if he wanted to keep up, he needed more time at the field house, more reps with the weights, more hours on the track.

Mary told him she didn’t mind, and the funny thing was, she really didn’t. Life was good at home. Mike was happy about being a father, because Cody was all boy from the moment he was born. His first word was
ball
, and Mike bought him a pair of running shoes months before he could walk.

The years that followed were a blur of vibrant reds and happy yellows. Mike was coming into his own, each season showing him faster, more proficient at catching the long bomb. There had been no warning, no sign that life was about to fall apart.

In the spring of 1978, when Cody was nearly five, Mary learned she was expecting again. Still, it wasn’t the coming baby, but a bad catch one October Sunday that changed everything. Mike was all alone, ten yards away from the nearest defender, when he reached for the sky, grabbed the ball and came down at an angle that buckled his knees.

A torn anterior ligament, the hospital report showed. Surgery was scheduled; crutches were ordered. “You’ll miss a season,” the doctor told him. “To be honest, I’m not sure you’ll ever run the same again.”

From the beginning, Carl was different. He didn’t cry the way Cody had, and he slept more than usual. His fussiest moments were during feeding time, when milk from the bottle would leak out his nose while he was eating, causing him to choke and sputter and cough.

Mike would look at him and get nervous. “Why’s he doing that?”

“I’m not sure.” Mary kept a burp rag close by, dabbing at the baby’s nose and convincing herself nothing was wrong. “At least he isn’t crying.”

Either way, Mike wanted to be gone. As soon as he could, he got back in the training room, working harder than ever to make the knee well again. By the next fall, he was cleared to play, but he was more than a second slower in the forty.

“We’ll try you at special teams, Gunner,” the coach told him. “You’ve got to get your times down if you want your spot back.”

His future suddenly as shaky as his left knee, Mike began staying out with the guys after games, drinking and coming home with a strange, distant look in his eyes. By the time Carl Joseph was two, Mike was cut from the Falcons. Cut without so much as a thank you or a good-luck card.

By then they knew the truth about Carl Joseph.

Their second son had Down syndrome. His condition came with a host of problems, feeding issues, developmental and speech delays. One morning Mary sat Mike down at the breakfast table.

“You never talk about Carl Joseph.” She put her hands on her hips. “You act like he has the flu or something.”

Mike shrugged. “We’ll get him therapy; he’ll be fine.”

“He won’t be fine, Mike.” She heard a crack in her voice. “He’ll be this way forever. He’ll
live
with us forever.”

It was that last part that caught Mike’s attention. He said nothing significant at the time, nothing Mary could remember. But that summer, he was gone more than he was home. Always his story was the same. He was traveling the country
looking for a tryout, getting a few weeks’ look in one city and then another, working out with a handful of teams, trying to convince coaches he hadn’t lost a step, hadn’t done anything but get stronger since his injury.

But one weekend morning, when Mike was still asleep in their bedroom, Mary found a Polaroid picture in his duffle bag. It was of him in a bar surrounded by three girls, one on each knee, one draped over his shoulder.

When Mike woke up, Mary was in the kitchen ready to confront him. He would have to stop traveling, stop believing his next contract was a tryout away. Bars would be a thing of the past, because she needed him at home, helping out with the boys. Money was running out. If football had nothing more to offer, he needed to find a job, some other way to support them. She had her speech memorized, but it was all for nothing.

He took control of the conversation from the moment he found her at the kitchen table.

“This…” He tossed his hands and let them fall limp at his sides. His eyes were bloodshot. “This isn’t what I want anymore.”

“What?” She held up the Polaroid. “You mean this?”

Anger flashed in his eyes. He snatched the picture from her, crumpled it, and slammed it into the trash can. The look he gave her was cold, indifferent. He gritted his teeth. “What I do outside this house is my business.”

She opened her mouth, but before she could tell him he was wrong, he slid his wedding ring from his left hand and dropped it on the table between them.

Carl’s cry sounded from upstairs. Slow and monotone, the cry of a child who would always be different. Mary looked up, following the sound. Then she found Mike’s eyes again. “This isn’t about me.” She kept her tone calm, gentle. “It’s about you.”

A loud breath escaped his lips. “It’s not about me.”