Read A Time in Heaven Online

A Time in Heaven 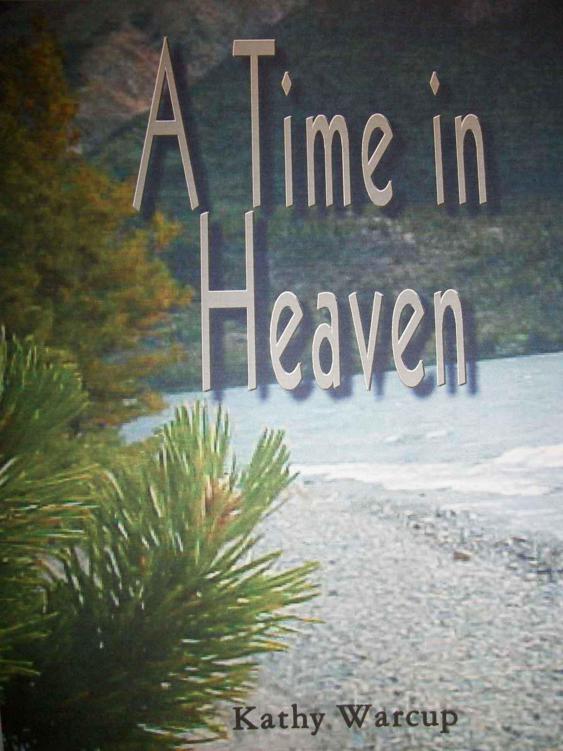 A TIME IN HEAVEN

Katie Warner was an upper elementary teacher at a private school in western Pennsylvania.  She had taught science there for years.
She enjoyed teaching
life science and physical science, but h
er favorite class
to teach
was environmental science.
The outdoors held a special place in her hea
rt and she expressed this love in how she taught all of
her classes.
Her love of nature was not only expressed in the content of her lessons but also
in the pictures
of wolves, and eagles, and
grizzly
bears
that decorated
her classroom walls.
Some of her students affectionately called her Mother Nature.

The students in Katie’s classes this past year
had been
an
exceptional
group
.
They were smart and so curious about the world around them.
She had enjo
yed every minut
e she spent
teaching them
.
By the end of the year
,
Katie knew that her students had
developed a
n appreciation and a
new respect for their environment.
But the group coming to her next fall was a different story.
They were going to prove
to be
a challenge.
The faculty at the school had labeled the
m
“
the
class from hell’ from the time they were in kindergarten.
When school was over in May, Katie decided to ta
ke a vacation in August just
too
emotionally prepare for the coming year.

This
wasn’t going to be just any vacation
. The
trip
she had planned for
this summer was going to be a great adventure
.  Katie was going to Alaska. She had been on cruises to Alaska before, but this time she was staying at a wilderness fishing camp called Heaven
.  The camp was located on an island
along the western coast of Alaska
.  She would take a jet plane to Seattle.  There, she would catch a floatplane to the fishing camp located far from roads and phones.  It made her smile ever
y time she thought of being in the wildernes
s
by herself.  Well, not quite by herself, she was taking her two year old Labrador retriever with her.  Sadie had become Katie’s best friend and they shared everything.  Leaving her every morning to go to work was so hard for both Katie and Sadie, but now they would spend two weeks exploring the Alaskan wilderness together.

Jesse Danvers had been on the top o
f the music charts.  He had been on numerous
television
shows and even in a major motion picture.
His concerts
around the world
had always been sold out.
N
ature and
the
wildness
had always been his passion
and it was reflected in his music
. His celebrity allowed him to be
on the advisory boards of several
well-known
environment
al
groups.
Jesse loved sharing his music and his love of
the
wild
er
ness to anyone who would listen to him.
His life was good.

Then
,
his marriage started to dissolve.  They had grown apart as Jesse toured more and more, and his wife began a career and a life without him. T
he
divorce from the woman he had planned on growing old with
and the death of his father
happened within a month
. These two events
sent Jesse into a tail-spin
.
He found that he couldn’t emotionally handle the confliction between his professional and personal lives. H
is music was put on the back burner and alcohol started to weasel its way into his life.  Partying took the place of touring. Not being in the public eye
as
much, sales of his music dropped off and he lost his record contract.

After another failed marriage, a couple of DUIs and a rather serious
car
accide
nt, Jesse worked hard
getting his life
back together again.
Now, t
here was new music, and it was good.  People were listening
again. He was in the studio finishing his new CD when he got the word from his manager that a new recording contract was in the works.
Things only got better with the news of an extensive Asian tour.
He would
be gone for more than a month playing Japan, South Korea, India and even,
China. To
Jesse, it meant getting the band together and rehearsing for weeks to get ready.
Life was looking good again.

Now
that
all the rehearsing was behind him and
the tour
was
starting in a couple of weeks
,
Jesse made the decision to take two weeks
for himself,
and go fly fishing in Alaska.  With his manager’s blessing, he booked a stay at a remote fishing camp on an island called Heaven.

THE FLIGHT TO HEAVEN

Both Jesse and Katie had planned on arriving in Seattle the day before the
ir
August tenth
float plane trip to the
fishing
camp.  Katie
’s plane from Pennsylvania
got in
to Seattle
around
midday and
she
settled in
to a hot
el for the night.  Jesse’s flight
was delayed and he didn’t arrive at
the
Seattle
airport
until almost midnight.  The
ir
float
plane was to leave at noon
the next day
, but a little after midnight, they both got a call on their cell phones from
the pilot, Mike Smith.  He told them
that a storm was moving in and if they wanted to get to their vacation, they needed to meet him at the plane and be ready for takeoff at 5 am
the next morning
.

Just before dawn
,
Katie was trying to hold on to her fishing gear and her two year old yellow lab, Sadie, as she hurried toward the plane that would be taking her on her much anticipated vacation.  She loved fishing about as much as she loved Alaska, so it made perfect sense to combine the two this summer.  And then there was the “class from hell” that she was facing this coming school year. This time away is just what she need
ed to get herself ready for the coming school year
.

Jesse
, with his fly pole and guitar, was
also
hurrying toward the plane that would be whisking him away. Not that he needed to get away, but
he
just needed to get some rest.  Jesse was about to em
bark on his concert tour that would include much
of Asia.  He’d been rehearsing
nonstop
with his band for the past month, now he was going to get recharged for the weeks ahead on the road.  He wasn’t complaining though.  This was the biggest thing to happ
en in his career in years.  H
e wanted to be ready for the challenge of performing practically every night in a different city. After all
, he wasn’t that twenty-
five year old with endless energy any more.

Katie was the first to arrive at the plane.  She was greeted by the pilot, Mike Smith.  Smith was an experienced bush pilot, and he looked
every bit
the part.  Katie guessed that he was about
50 years old, maybe 55.  He was dressed in a red
and black
plaid shirt, a blue down vest and a pair of jeans that were torn at one knee and frayed at the ankles.
His boots looked about as old as his was.
He prob
ably hadn’t shaved that morning;
ma
ybe, hadn’t showered either. He
certainly hadn’t combed his bushy graying hair.

“Good morning, miss
,
” Smith said as Katie came up to the plane. “You one of the passengers to Heaven Fishin’ camp?”
Katie couldn’t help notice the look of disgust on Smith’s face when he saw Sadie.

“Yes, sir.  I hope w
e’re not late?  Sometimes Sadie here,
has her own schedule
.
” Katie said as she looked down at her lab.  “Did my lugga
ge get here ok?”  She handed Smith
her fly pole and backpack.

“Already on the plane.”  Let’
s get you and your friend
there in
a
back seat.
She’ll be more comfortable back there, and I ‘spe
ct so will the other passenger.”

“So, there will be only two passengers
going to Heaven
?” Katie asked.  She liked the sound of it.  Few
er
people would mean more of a wilderness experience for her.

“Yes, miss.  Just you and a male passenger.”
Smith looked to the front of the plane
.
”Looks like he’s here
,
too.”

Katie was just stepping up into the plane, when she looked up to see the other passenger. He had on a blue
and red plaid shirt with a leather vest.  A
n old
cowboy hat
partially covered his face
, but she could tell that he had long blonde hair. As she took her seat, she took a better look.  “Oh my God. Jesse Danvers! I’m going fishing with Jesse Danvers!”  Katie surprised herself that her excitement didn’t come
spewing
out
of her mouth sounding like some nutty fan.
She
was thankful she
hadn’t said it loud enough for even Smith to hear her.
She was relieved that no one heard her.

But there he
was
one of
the biggest influence
s
on her life.  It was because of Jesse
Danvers
that she had become a science teacher, more specifically an environmental science teacher.
Katie had first been drawn to his music.
It was filled with metaphors about nature. And his love songs were of pure and
honest
love.
Later his philosophy
and political stands
had led her to love
and appreciate
the environment even more
.
Being a teacher
had
let her
share this with those that could make a difference in the world – the children.  She had even come to Alaska for the first time because of this man.  And now he was getting on the same plane that would take them to Heaven.

“Keep control” she said to herself as she began to perspire a little.

Smith took Jesse’s fishing pole and guitar and put them in the plane’s hold.
Jesse got into the plane. When he reached his seat, he
took off his hat and offered his hand
to shake Katie’s hand.
“Hi.  I guess we’re going to be fishing buddies for a couple of weeks. My name is Jesse Danvers. And
yours
?”

“
Katie Warner and this is Sadie,”
she told him
nodding to her lab
.
Then her mouth took over for her brain.
“Oh
,
I know your name.  I’m your
biggest fan.”
In her head, she was shouting, “Stupid,
stupid,
stupid!!”

“I didn’t know there w
ere any of those around anymore,
”
he said
as he gav
e a little laugh.  He put his hat back on, sat down in his seat
and buckled his seat belt.

“Miss, let’s get buckled up. And hold on to that dog.” Smith barked at Katie as he got into the plane and buckled himself in.
Katie
didn’t like
this pilot very much.

The engine of the plane started and they were heading down the runway.  Jesse was feeling a little uneasy.  The
re was something about that woman
sitting behind him that attracted her to him.  But that’s as far as he was going to let it go.  This trip was to get some rest, not start a relationship.  Not now.
He had waited far too long to get his career on the right track and no one was going to knock him off that track.
And besides, he wasn’t going to get involved with another fan.

The Moslem Wife and Other Stories by Mavis Gallant, Mordecai Richler
Frog and Friends by Eve Bunting
The Twilight Zone: Complete Stories by Rod Serling
Red Man Down by Elizabeth Gunn
Declare (Declan Reede: The Untold Story #4) by Michelle Irwin
Alcatraz versus the Knights of Crystallia by Brandon Sanderson
Millionaire on Her Doorstep by Stella Bagwell
The Fall by Annelie Wendeberg
Coveted - Book 3 in the Gwen Sparks Series by Nelson, Stephanie
Underdog by Eric Walters