Read A Time to Keep Online

A Time to Keep 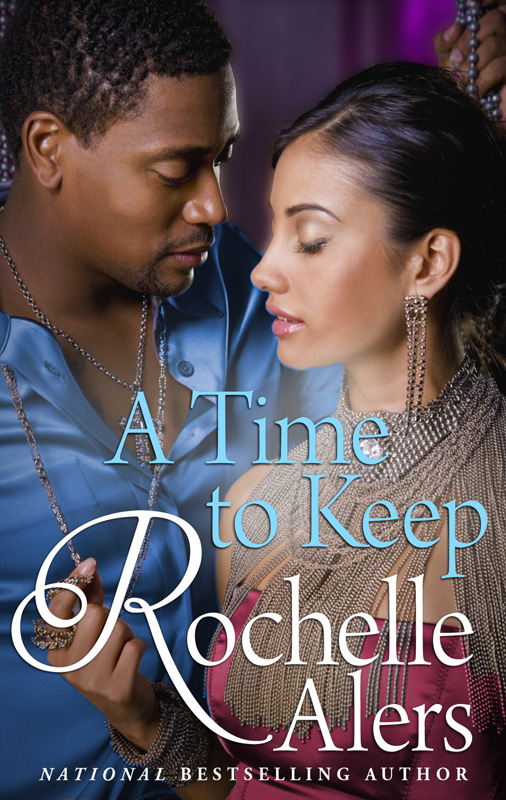 Gwendolen Taylor, fed up with big city life, finds herself inheriting an antebellum estate in Bayou Teche. Little does she know that this legacy may lead to a love beyond her wildest hopes and dreams.

A Time to Keep

T
he ring tone from Gwendolyn Taylor's cell phone playing Beethoven's Symphony no. 3 in E-flat major pulled her attention away from the panoramic landscape of Cajun country. She'd just passed a road sign that indicated she'd entered the town limits of Franklin, Louisiana.

Looking at the caller ID on her cell, she pushed a button on the hands-free receiver. “Yes, Lauren.”

“Are we there yet?” Laughter followed the childish query.

Shaking her head and sucking her teeth, Gwen said loudly, “Girl, you need a job that takes you out of the house, because you're beginning to sound like your kids.” Lauren, a literary researcher Â and Â her Â husband, Â bestselling Â author, Â Caleb Samuels, both worked from home.

“Are you there yet?” Lauren repeated.

She glanced at the GPS navigational screen. “Almost.”

“It's different from our neck of the woods.”

Lauren's soft laughter came through the speaker. “Don't you mean
my
neck of the woods?”

Gwen smiled. “My driver's license still has a Boston address, my car a Massachusetts plate, and when I open my mouth and say
pawk
everyone will know that I will never be crowned Miss Sweet Tater Pone.”

“You're right about that,” Lauren agreed. “But you should know you're much too mature for an insipid beauty contest.”

Gwen's delicate jaw dropped. “Mature? Speak for yourself, Mrs. Samuels. You're the one with three children, and a possible fourth on the way.”

“I told you before that Royce is going to be my last baby.”

“You said that after you had Kayla.”

“Getting pregnant doesn't just happen Lauren Taylor-Samuels. Didn't you tell me that you wind up pregnant whenever you and Caleb take afternoon naps together?”

“For your information, Miss Know-It-All, Cal and I no longer nap together in the afternoon.”

“Are you saying you guys have given up knockin' boots?”

Lauren laughed again. “I refuse to answer that question on the grounds that it might incriminate me.”

Gwen took another quick glance at the navigational screen. She was almost there. “You guys should have one more and make it an even four.”

“I'll have one more if you have one.”

“You're going to need one to make a baby.”

“Not if I go the test tube route.”

Lauren only called her by her full name whenever she was upset with something Gwen said or did. “I can and I will if I'm not married by the time I'm thirty-eight.”

“You better start looking for a man now because you'll be looking at thirty-eight in less than four years.”

Slowing her late-model sedan, Gwen came to a complete stop at an intersection. Looking both ways she continued in a southwesterly direction. “So will you, Lauren Vernice Taylor-Samuels.” She and Lauren were first cousins, born weeks apart.

“But, I'm the one with the husband and children.”

“I'm not rubbing it in. You would've married years before me if you hadn't broken off your engagement to Craig Hemming.”

“Craig was wrong for me. He was too old and too possessive. I can't stand a man who won't allow me my space.”Â

“Is that why you're running away, Gwen? Because you need space?”

“You know I'm not running away.” She didn't want to argue with Lauren about why she'd sold her condominium and resigned her position as a lifestyle writer at the
Boston Gazette
to move fifteen hundred miles away and live in a house she'd inherited from a relative she hadn't seen in more than twenty years.

“I don't want you to think I'm giving you a hard time,” Lauren continued in a tone she used when correcting her children. “It's just that I miss you already. You're more than a cousin. You are my sister.”

“Stop it,” Gwen chided softly, as her eyes filled with tears. “I can't drive and cry at the same time. I'll call you tomorrow after I see what Aunt Gwendolyn left me.”

She smiled, blinking back the tears shimmering in her
raven-colored eyes. “I promise. Kiss the children for me, and give Caleb my love.”

Pressing a button, Gwen ended the call, struggling to bring her emotions under control. She was frightenedâno, petrified was a better wordâto leave all that was familiar to her for something so removed from who or what she was. But she knew her life would not change unless she actively effected that change.

It had taken her four years to become the consummate minimalist; she'd streamlined her lifestyle eliminating what she considered excess as she purged her closet of clothes she hadn't worn more than twice in a given season, donated books to the local library and nursing homes that were collecting dust on her to-be-read pile, and gave up entertaining men who'd professed their undying love, but were unable to commit to something deeper.

Gwen was still trying to uncover what deeper meant. Did it translate to
I love you
instead of
I like you a lot?
Whatever it was, she wanted no part of their superficial games. At thirty-four she was ready to start anew in a different state and with property she'd inherited from her namesakeâa reclusive, former actressâher great-aunt.

A smile slowly crept through her expression of uncertainty as she drove down Main Street. A wave of nostalgia swept over her; it was as if she'd stepped back in time. Old-fashioned street lamps lined the street, rolling out beneath an arbor of live oaks.

The lush setting had become a reality. Boston-born, reared, and educated, Gwendolyn Paulette Taylor was about to trade the cold, harsh New England winters for the lush, sultry heat of Bayou Teche, the largest of Louisiana's many bayous.

Her parents, her father in particular, were opposed to her
moving so far away. Millard and Paulette Taylor had lost one child, a son, to leukemia before he entered adolescence, and sought to hold onto their surviving child at all costs.

She took another quick look at the screen. She would be home within another two miles. Homeâa house she'd only seen in photographs, a place that was hers to renovate or decorate to suit her tastes.

Gwen left Franklin's Main Street and maneuvered onto a narrow, winding road leading to the property known to the locals as
Bon Temps.
The setting sun turned the surrounding landscape into a swamp that she glimpsed through a shadowy veil. Cypress, pine and oak trees draped in Spanish moss stood like sentinels overlooking a body of slow-moving water teeming with various wildlife while providing perches for species of birds she'd never seen before.

She was so awed by the beauty of the scenery that she didn't see the three-legged dog hopping across the road. Swerving sharply to avoid hitting the dog, she veered to the right, skidded, and came to an abrupt end in a ditch.

“Damn!” she muttered between clenched teeth.

Taking a deep breath, she shifted into Reverse, then into Drive, stepped on the gas as the car went completely still. There was only the sound of spinning tires. She shifted again, this time into Park, and stared through the windshield. She was literally stuck in the mud.

Gwen saw something moving in the water less than a hundred feet from where she satâstrandedâa prisoner in her own vehicle. She didn't know what was gliding under the smooth surface, and didn't much want to know because she wasn't getting out of the car.

Reaching for her cell phone, she scrolled through the directory while she searched through her leather handbag on the
passenger-side seat for her credit card case. Pressing a button, she listened to the ringing for a programmed number.

Gwen gave Zack her name, membership number and her location. He took the information, telling her he would call her back as soon as he had located a nearby service station.

Drumming her fingers on the leather-wrapped steering wheel, she hummed a nameless tune while awaiting a call back. Ten minutes later, she grabbed the receiver after the first ring.

“Miss Taylor, this is Zack. I called two stations in your area, one doesn't have a tow truck, and the other is out on a call.”

“What time will he be back?”

“An hour!” she repeated, her voice rising slightly. There was no way she was going to sit in a car alone surrounded by who-knew-what type of wildlife creeping, crawling, or slithering around her.

“Do you want to wait, Miss Taylor?” Zack drawled.

Why, she wondered, did it take him more than thirty seconds to say seven words. The further south she'd driven, the more pronounced the drawl. “I'll call you back,” she said, not knowing what else to say. She ended the call, then dialed nine-one-one.

She took a deep breath. “Deputy Jameson, my name is Gwendolyn Taylor, and I'm stuck in a ditch on the road leading to
Bon Temps.
I called for road service, but was told they can't come for another hour.”

“What type of
ve-hic-le
are you driving?”

Gwen shook her head. He'd drawled out
vehicle
into more than three syllables. “It's a dark blue BMW sedan.”

“I'll radio one of our officers to assist you. Make certain you keep your cell phone on in case we have to call you.”

“I will. Thank you, Deputy Jameson.”

Holding the tiny phone in a death grip, she sat back and waited for one of St. Martin Parish's finest to rescue her.

Sheriff Shiloh Harper glanced at the watch strapped to his left wrist for what seemed like the hundredth time in the past hour. He couldn't wait for his shift to end so he could go home, take a cool shower, and crawl into the hammock on the screened-in second-story veranda, where he could remind himself that he was one day closer to prosecuting criminals instead of arresting them.

He was covering for a vacationing deputy, and had spent the shift mediating petty incidents: a teenage boy had pumped two dollars more in gas than he had on him; a fifteen-year-old girl had tried to buy beer with a fake ID; and he'd issued a slew of tickets for drivers exceeding the speed limit in a school zone.

As he slowed the police-issued Suburban SUV, he maneuvered behind a copse of trees to wait for wannabe NASCAR drivers who used a stretch of roadway without a stop sign or traffic lights as their private racetrack. Leaning back in the leather seat, he stared at the radar device and waited for the sun to set. With the approach of nightfall, he was certain to catch at least a couple of speeders before his noon-to-eight-o'clock shift ended.