A Time To Love (A Mill Creek Crossing Romance) 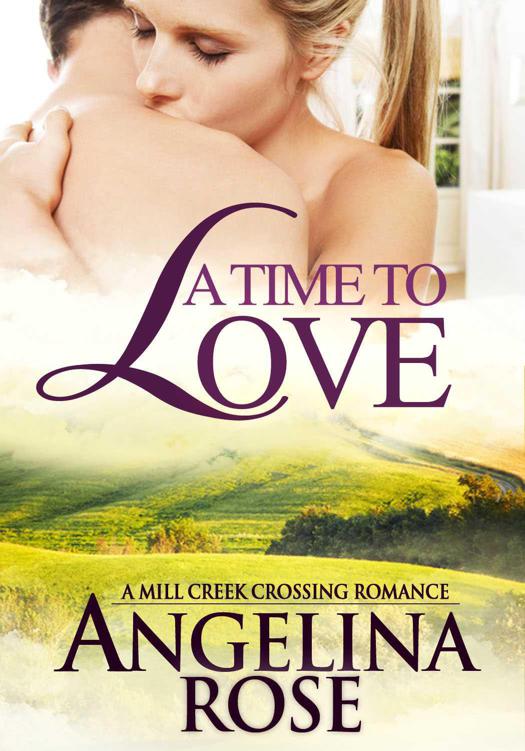 A TIME TO LOVE

I love to connect with my readers

Gracie Tillman was never one to mince words. Even her husband of eight years, Randy knew she didn’t hold her tongue for anyone or anything.  With their ninth wedding anniversary looming on the horizon, Gracie wondered what her husband might have up his sleeve. Would he whisk her away on a romantic trip as he did for their fifth anniversary? Or would he want to stay home all snuggled up under the covers as they did on their seventh anniversary?

After a failed trip down the aisle in her twenties, Gracie had guarded her heart pretty fiercely. She never told many people about what she considered to be her most embarrassing moment in life - the time she was stood up at the altar. Recently, she had told a newcomer to town, Erica Dixon after she’d been stood up too. Gracie had felt so bad for her as she watched her sit at the diner alone, arguing on the phone with her ex-fiance.

At eighteen, Gracie had thought she found the man of her dreams. Robert was a sweetheart, and they’d dated for four years after meeting just out of high school. When she turned twenty-one, Robert proposed, and they set a wedding date for just a few weeks after she would turn twenty-two.

Gracie’s mother, Emma was not at all happy she was marrying Robert. She kept telling Gracie she was too young, and there was just “something about” that Robert boy. Her mother’s warnings aside, Gracie went through with all of the wedding planning and showed up on her wedding day ready to marry the man of her dreams.

Her sister, Eva was to be her maid of honor. Her mother made the wedding cake even though she voiced her disapproval all the way up to the moment Gracie was to walk down the aisle. Eva, who was only sixteen at the time, was their mother’s favorite. Emma had given birth to Eva with her new husband, Jack because Gracie’s father had died when she was very young. Gracie always felt second best when compared to Eva. Gracie, who had fire red hair and a curvy figure, always felt her blond haired, blue eyed sister was the official princess of their family.

On her wedding day, Gracie was happy to be the center of attention for once. As she walked down the aisle, she did find it odd her groom wasn’t standing there. No one had bothered to come tell Gracie he never showed up. Later she would learn Robert was gay, and he had only been marrying her to avoid telling his family. The weeks and months that followed were a mess with her mother blaming her for wasting so much time and money and not listening. Their relationship was never the same after that.

When Gracie’s mother passed away a few years ago, it turned even uglier. Eva had been her mother’s primary caretaker when she was diagnosed with cancer, and she was living with her at her home in Tennessee. Gracie visited as often as she could but she really believed Eva had talked her mother into the final act that really broke their family apart. Emma had passed away leaving a will giving Gracie nothing but a used car and one thousand dollars, while Eva received over three hundred thousand dollars in insurance money plus their mother’s modest home. Gracie hadn’t heard from her sister in six years, and she didn’t attend Gracie’s wedding eight years ago either. Things hadn’t been good even before their mother died, so Gracie had vowed she would create her own family without her sister.

“Deep in thought?” Randy asked as he put his hands on Gracie’s shoulders. She was sitting at her desk working on the bills, wondering how to make ends meet yet again. Somehow they always got by on her salary as a waitress and Randy’s salary as a janitor at the local elementary school. Thankfully, Mill Creek Crossing wasn’t an expensive place to live.

“Oh, just thinking about our anniversary coming up,” she said smiling up at him. Even nine years later, she still thought he was the handsomest man she’d ever seen. With his prematurely graying hair and dark brown mustache, she thought he looked like a young Sam Elliott. Of course, Randy was a good bit older than Gracie at forty-six years old, but they always got along and had the same interests.

“Whatcha thinking about?” he asked while giving her a massage.

“Just wondering what we might be doing this year,” she said grinning. “Got any big plans?”

“Now, honey, you know we’re short on money right now…” he said letting go of her shoulders and sitting down on the edge of the bed. “Don’t go getting any big ideas in that pretty head of yours.” Gracie immediately felt deflated. Times had been tough in recent years with less traffic at the diner. Plus, Randy’s hours had been cut last year so that affected their household budget too.

“I know. It’s just that I was looking forward to a little quality time with my honey,” she said standing up as she walked toward him. She sat down on his lap and kissed him gently on the lips. “Plus, I was hoping we could commemorate our ninth anniversary with a little miracle.”

“Gracie, sweetie, we’ve been trying to get pregnant for almost nine years. What makes you think it would happen this time?”

“Maybe if we got away from the stress of work, we could make it happen,” she said.

“Please don’t get your hopes up again. You know the doctor said our chances of having a baby were slim to none.”

Randy stood up and started getting dressed for work. She could tell she’d upset him by bringing up the baby issue yet again. Gracie had longed for a child since she was one herself, and no matter how hard she tried she was never able to get pregnant.

She watched her friends have babies like it were nothing, yet she couldn’t have one. Wondering why God was punishing her, Gracie had found herself depressed about it many times. Randy didn’t like to see his wife so depressed, so he’d recently come to the unilateral decision they should just stop “trying”.

“Look honey, I don’t want to see you so upset and depressed again. Don’t you remember how bad it got a couple of years ago when you could barely get out of bed because of your depression? It’s not worth it,” he said without thinking.

“Not worth it? It’s worth it to me, Randy! I’ve wanted to be a mommy since I was a kid myself. If we had the money, I’d do anything to get pregnant, but we don’t.”

“No, we don’t, Gracie. And I’m sorry you didn’t marry a man with money like your mother wanted, but here we are.” Randy tied his shoes and stormed out of the bedroom with Gracie hot on his heels.

“I’m not blaming you, Randy!” she said feeling horrible for bringing up money again.

“Well, it sure feels like it. I’ve got to go before I’m late for work. See you tonight,” he said as he slammed the front door and got into his truck.

Gracie stood in her living room with tears streaming down her face as she watched Randy’s truck throw up dust going down their gravel and dirt driveway. She wondered to herself what she was doing making the love of her life feel like a worthless, poor piece of crap. It wasn’t his fault they weren’t able to afford in vitro fertilization or other fertility treatments. She would have to make it up to him, yet again, when he came home from work, she decided.

Eva Cameron stood in front of her swanky Atlanta apartment building with her lips pursed, and her teeth gritted. How had she allowed this to happen to herself? When her late mother left her three hundred thousand dollars, she thought she had it made. Now, only six years later, she was flat broke with nowhere to go. How had this happened to her?

With nowhere to turn, she had a big decision to make. After hearing some interesting, but disturbing news from her mother’s estate attorney, she had a major choice to make. Either she crawled back to her sister and made amends, or she might just end up homeless. Her choices were truly limited, but without Gracie she wouldn’t be able to move forward in her own life. Of course, Gracie couldn’t ever find out she was a major cog in the wheel of Eva’s future. No, that little tidbit would have to be kept secret.

As her taxi pulled up, she took what was left of her belongings and tossed them into the trunk. Starting over wasn’t going to be an easy task, but going home to Mill Creek Crossing was going to make it immensely harder.

“Gracie, what’re you doing out here?” Randy asked as he walked out of the school building to find her leaning against his car.

“I wanted to apologize. You know I don’t blame you for any of this,” she said putting her hand on his arm.

“I’m sorry I stormed off as I did. I just hate I am this age and working as a school janitor. We can barely make ends meet most of the time, Gracie. Having a baby right now would only add stress, so maybe it just isn’t meant to be for us,” he said. Gracie’s insides were churning. Why had she come to apologize when she really wanted to slug him after all? “Look, honey, I know having a baby is something you want, but fighting all the time is not going to make it happen.”

“I hear my biological clock ticking in my ear all day long, Randy. I watch happy families come into the diner, and I wonder why I can’t have that. I’ve been thinking…”

“Gracie, we barely see each other now,” he said running his fingers through his salt and pepper hair.

“I know, but maybe I can take some classes online and find a better paying job…”

“Can we table this discussion for right now? I’m tired, and I’m hungry,” he said with a slight smile. “Let’s reconvene on this topic after our anniversary next week, okay?”

She knew he was right that she was ruining their anniversary week, so she nodded her head in agreement. Running like a bull in a china shop wasn’t going to get her pregnant any faster, so she needed to refocus on what she could do to make things happen after they finished celebrating.

Gracie followed Randy back to their house. When they pulled up, there was a strange car in the driveway, which was unusual given the remote location of their home. They had a small three bedroom house on two acres of land just off the mountain, so no one really drove back there that far unless they were lost. But this car didn’t look lost at all. In fact, some woman who was highly overdressed in a black pantsuit and strappy heels was leaning against the car with her arms crossed.

Randy and Gracie got out of their cars at the same time as the woman slowly turned around.

“Excuse me? Can I help you with something?” Randy asked just as Gracie realized who it was.

“Oh my God…” Gracie said as she stopped dead in her tracks and stared with her mouth open. “You have the gall to show your face here?” she snapped through gritted teeth.

“My former sister. This is Eva, the bitch,” Gracie said as she walked past her sister to unlock the front door.