Read A Touch of Sin Online

A Touch of Sin 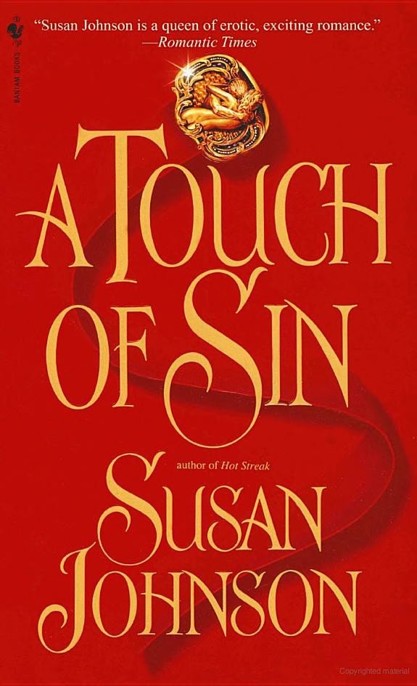 A Touch of Sin
By
Susan Johnson
Contents

"Her romances have strong, intelligent heroines, hard, iron-willed men, plenty of sexual tension and sensuality and lots of accurate history. Anyone who can put all that in a book is one of the best!"

"No one… can write such rousing love stories while bringing in so much accurate historical detail.

Of course, no one can write such rousing love stories, period."

… With her knowledge of the period and her exquisite sensual scenes, she is an exceptional writer."

"Fascinating… The author's style is a pleasure to read."

Don't Miss Any of

A TOUCH OF SIN

A TOUCH OF SIN

Bantam Books are published by Bantam Books, a division of Random House, Inc. Its trademark, consisting of the words "Bantam Books" and the portrayal of a rooster, is Registered in U.S. Patent and Trademark Office and in other countries. Marca Registrada. Bantam Books, 1540 Broadway, New York, New York 10036.

I want to take this opportunity to thank everyone who's written to me recently. I very much enjoy hearing how my stories bring pleasure to readers. As a devout romantic, I subscribe to the optimistic hope for love and happiness and aspire in some small way in my writing to demonstrate that those longings can be realized. And my characters, undaunted, self-reliant, cynical at times—as well as cheerfully roseate—give evidence that those hopes and dreams can prosper. In A TOUCH OF SIN, Pasha and Trixi offer their own special observations on the delights and complications of desire, passion, and love. I hope they bring a smile to your day.

A Touch of Sin
Chapter One

A country house outside Paris

"Odile's much too young and vulnerable since Guillaume's death," Teo Duras noted. Her gaze lifted from the letter declaring their daughter's newfound love, and distress filled her eyes. "And Langelier's twenty years older."

Her husband turned back from the view of the Seine outside the window, his expression grim. "Worse yet, he cheats at cards."

"I don't know if I should mention Langelier has a mistress tucked away in the Marais," their son casually declared, shifting his long legs draped over the arm of the couch into a more comfortable sprawl. His lack of sleep last night was beginning to catch up with him. "Dilly should look beyond his suave charm and his dramatic propensity to quote Goethe."

"You know how important her poetry is to her," Teo murmured, a worry line drawing her delicate brows together. "The man's completely turned her head."

"More pertinently, a rich young widow," Duras crisply remarked. "Perhaps it's time to make a call on him."

"I'll join you," Pasha cheerfully offered, undraping his legs and pulling himself up into a seated position. Running his fingers through his wild black hair, he lazily stretched. "I hear he's good with a rapier," he murmured with a gleam in his eyes. "Why don't I stand you second, Papa, or you could second me. That should put an end to his pursuit of Dilly."

"For heaven's sake," Teo exclaimed. "Nothing so drastic is required. You men could just talk to him, couldn't you? I'm sure Odile is the merest flirtation for him."

Pasha knew better; he knew Philippe Langelier. They gambled at the same clubs and met occasionally at the same demi-rep entertainments, like the one last night. And the man needed money. "I'm sure a talk will suffice," he said, not wishing to alarm his mother. "If you want, Papa, I think I know where to find him now."

"Don't wait up," Duras said to Teo, walking over to kiss her good-bye.

"I won't," she replied, rising from her chair. "But I'll sleep more peacefully in Paris," she significantly added.

Duras knew better than to argue when he heard that tone of voice, but he was firm on one point. "You can't see Langelier."

"Very well," Teo grumbled. "I suppose men have all that manly talk that might soil my ears."

Duras glanced at his son, who smiled. "We're going to scare him to death, Mama. It won't be a pretty sight."

"As long as you're not violent. Although I dare say."

Teo went on, her mouth curved into a smile, "a small scare might just do the trick."

It turned out slightly different.

When father and son walked through the opened door of Langelier's apartment, they discovered he'd been murdered by someone more disgruntled than they. While his beautiful mistress stood naked on his bed, his still-warm body lay in a spreading pool of blood.

"A man with an ax did that—just moments ago," she calmly said, brushing aside a honey-colored curl from her forehead. "And I can't move with all that blood." Apparently she was less concerned with her nudity or her lover's demise than wetting her feet. "Would you lift me down?"

Pasha was more than willing; she was utterly gorgeous.

"Thank you," she softly said, her lush violet eyes lifted to his as he set her down in the adjacent room. "I don't know what I'm going to do."

No thought was required, no hesitation or reflection. "Perhaps I could help," Pasha pleasantly said.

"I'd be ever so grateful." Intent on escaping Langelier's apartment with all speed, Beatrix Grosvenor smiled up at the handsome young man regarding her with interest.

"It might be advantageous to leave before the authorities arrive," Duras suggested, returning from a swift survey of the apartment.

"Would you like my coat?" Pasha's inquiry was overtly polite, as if there was a sudden chill in the air.

"I'll dress quickly." She held up her hand, fingers spread. "Five minutes." And turning away, she disappeared into Langelier's dressing room.

Pulling out her small portmanteau, she quickly found the key for the armoire in Langelier's coat pocket and began gathering her few garments. She worked feverishly, focused only on her task at hand, not allowing her mind to dwell on the swift and bloody justice dispensed on her jailer. Still partially in shock, she repressed the hideous murder, Langelier's screams, the chill calm of his assassin, necessity mobilizing her, her survival instinct taking over. Clothes… money… her few belongings… The words echoed through her mind repeatedly, urgently, a litany of liberation and deliverance after four long weeks in custody.