Read A Vote of Confidence Online

A Vote of Confidence 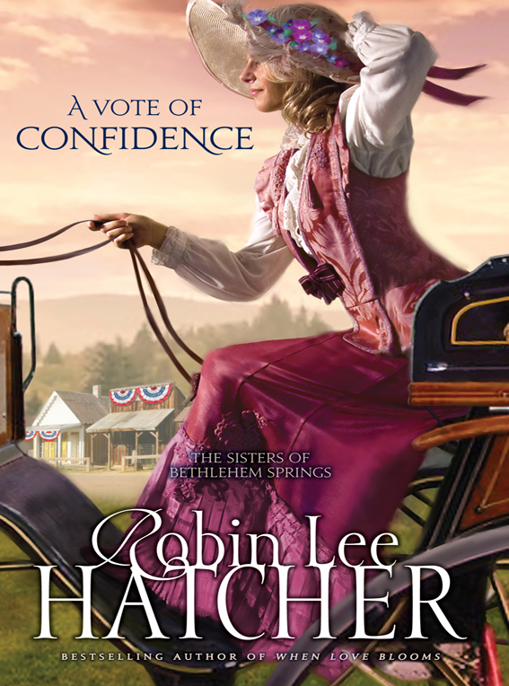 A VOTE OF
CONFIDENCE

THE SISTERS OF
BETHLEHEM SPRINGS

A Vote of Confidence

All rights reserved under International and Pan-American Copyright Conventions. By payment of the required fees, you have been granted the non-exclusive, non-transferable right to access and read the text of this e-book on-screen. No part of this text may be reproduced, transmitted, down-loaded, decompiled, reverse engineered, or stored in or introduced into any information storage and retrieval system, in any form or by any means, whether electronic or mechanical, now known or hereinafter invented, without the express written permission of Zondervan.

This title is also available in a Zondervan audio edition. Visit
www.zondervan.fm.

Requests for information should be addressed to: Zondervan,
Grand Rapids, Michigan 49530

All Scripture quotations, unless otherwise indicated, are taken from the
Holy Bible, King James Version.

Internet addresses (websites, blogs, etc.) and telephone numbers printed in this book are offered as a resource to you. These
are not intended in any way to be or imply an endorsement on the part of Zondervan, nor do we vouch for the content of these
sites and numbers for the life of this book.

All rights reserved. No part of this publication may be reproduced, stored in a retrieval system, or transmitted in any form
or by any means — electronic, mechanical, photocopy, recording, or any other — except for brief quotations in printed reviews,
without the prior permission of the publisher.

An Excerpt From Fit To Be Tied

Many waters cannot quench love,
neither can the floods drown it.

The Torpedo Runabout cut the corner from Shenandoah Street onto Wallula Street, driving over two of the boarding house’s rose
bushes in the process. The automobile then weaved dangerously close to Guinevere Arlington’s white picket fence.

With a gasp, Gwen jumped up from the porch swing.

In the nick of time, the Model T Ford veered away from her fence, avoiding disaster.

“Hello, ladies.” The driver tipped his hat to Gwen and her sister as if nothing was amiss.

“And there goes our next mayor.” Cleo shook her head and cast a look of despair at Gwen. “Ten o’clock in the morning and drunk
as a skunk. Can you imagine him holding the reins of government?”

“No, I can’t.” Gwen sank onto the porch swing again. “Hiram Tattersall is a fool, not to mention his penchant for strong spirits.”

Cleo crossed one booted foot over another as she leaned against the porch railing. “Why don’t you run for office, Gwennie?
Not a reason in the world you couldn’t do it.”

“Me?” Gwen looked at her twin in disbelief.

“Of course you. There’s nothing in the law that says a woman can’t be the mayor of our fair town. You’re a nicer person than
Mayor Hopkins, the old coot — ”

“I’m sorry. I know he’s sick or we wouldn’t be having this special election. But he hasn’t done a single, solitary thing of
worth while he’s been mayor, and everybody knows Tattersall will be an even worse mayor than Hopkins.”

“I have no qualifications for political office.”

“And Tattersall does? You’d do a better job than Hopkins and Tattersall put together. Folks like you.” Cleo winked. “Especially
the men, pretty as you are.”

Gwen wasn’t amused. “If I were to run, I wouldn’t want to be elected for my appearance.”

“So don’t let that be why. You got that fancy education burning to be put to use. Why not let folks see you’re as full of
information as a mail-order catalog?”

It was a ridiculous idea. Gwen had no intention of running for mayor. She was content giving piano lessons to the children
of Bethlehem Springs and writing her columns for the local newspaper.

Cleo drank the last of her iced tea, set the glass on the porch floor, and pushed off from the railing. “I’d best get back
to the ranch. I’ve got a load of chores still to be done.” She slapped her floppy-brimmed hat onto her head, covering her
mop of short, strawberry-blonde curls. “You’d be doing this town a favor if you were its mayor. We could use a little forward
thinking, if you ask me.”

Gwen smiled as she rose from the swing. “Darling Cleo, I could never be as forward thinking as you.”

Gwen followed her sister off the porch and around to the back of the house where Cleo’s pinto was tethered to a post. Cleo
stopped long enough to give Gwen a hug and a kiss on the cheek, then untied her horse, grasped the saddle horn, and swung into the
seat. “You think about it, Gwennie. I’m telling you. It’s the right thing to do. You pray and see if the Lord doesn’t agree
with me.” With a tug on the brim of her hat, she twirled her horse away and cantered down the street.

Gwen shook her head. Cleo could come up with the most outlandish ideas. Imagine: Gwen Arlington, mayor of Bethlehem Springs.
It was preposterous. Not that she didn’t believe women should serve in public office. She did, and she was glad she lived
in a state where women had the right to vote. But she had no political ambitions.

With a sigh, she returned to the front porch and settled onto the cushioned seat of the swing, giving a little push with her
feet to start it in motion.

The air smelled of fresh-turned earth, green grass, and flowers in bloom. The mountains of southern Idaho were enjoying warm
weather, although snow could be seen on the highest peaks to the north and east of Bethlehem Springs.

Gwen loved this small town. She loved her neighbors, the children who came for lessons, the women in her church sewing circle.
She loved the long, narrow valley, the river that flowed through it, and the tree-covered mountains that overlooked it all.
She loved the sense of the old West and the new century that surrounded her, horses and automobiles, outhouses and indoor
plumbing, wood-burning stoves and electric lights.

Her mother, Elizabeth Arlington, hadn’t felt the same about Idaho. She despised everything about it, so much so that after
four years of marriage, she’d left her husband and returned to her parents’ home in Hoboken, New Jersey, taking two-year-old
Gwen with her.

“Be thankful, Guinevere,” her mother said on many an occasion over the years, “that your father allowed you to come with me.
We’re alike, you and I. We need society and fine culture. Think of the advantages you’ve had that poor Cleopatra has gone
without. The opera and the theater. Fine schooling. You would never be suited to live in that backwater town where your father
chose to settle.”

But her mother was wrong. Bethlehem Springs did suit Gwen — a truth she discovered soon after her arrival in Idaho seven years
before. At the age of twenty-one, and with the reluctant blessing of her mother, she had come to Idaho to meet the father
and sister she couldn’t remember. She hadn’t intended to stay, but in a few short weeks she’d fallen in love with the area.
Her heart felt at home here as it never had in New Jersey.

A frown puckered her forehead. What would happen to Bethlehem Springs if Hiram Tattersall became its mayor? He wouldn’t try
to better their schools or improve roads or help those who had lost jobs due to mine closings. And if the governor of the
state succeeded in passing Prohibition in Idaho, as many thought he would, Tattersall wouldn’t enforce it in Bethlehem Springs.
She was convinced of that.

I would do a better job than he would.

But of course she had no intention of running for mayor.

Morgan McKinley wanted nothing more than to punch that artificial smile off Harrison Carter’s face.

“You’ll have to wait until after the election, Mr. McKinley. I’m sorry. The new mayor and the county commissioners must be
in agreement on these matters.”

Before Morgan did something he would regret — something that would get him tossed into the jail one floor below — he bid a
hasty farewell and left the commissioner’s chambers. When he exited the municipal building, he paused on the sidewalk long
enough to draw a calming breath.

Harrison Carter had delayed this decision for personal reasons, not for anything to do with an election. Several times over
the past year, the commissioner had offered to buy the land where New Hope was being built. If he thought these delays would
change Morgan’s mind about selling, he was in for a big disappointment.

With a grunt of frustration, he turned and headed for his automobile, parked on the west side of the sandstone building. Fagan
Doyle, Morgan’s business manager and good friend, leaned against the back of the car, his pipe clenched between his teeth.

“Then I’ll be asking what it is you mean to do about it?”

Morgan got behind the wheel of the Model T while Fagan moved to the crank. Once the engine started, Fagan slid into the passenger
seat and closed the door. Morgan turned the automobile around and followed Main Street out to the main road, thankful his
friend didn’t ask more questions. He needed to think.

Occasional complications and delays were expected when a man undertook a large building project, but this felt different.
Morgan had half expected Harrison to ask for money under the table, but that hadn’t happened. Just as well since Morgan wasn’t
the sort who bribed public officials. Nor allowed himself to be blackmailed by them. Not under any circumstance.

Remem-Bear Me by Terry Bolryder
Holding Their Own: The Toymaker by Joe Nobody
The Son-In-Law by Charity Norman
Checking It Twice by Jodi Redford
Driven to Date by Susan Hatler
Lust and Lies (The Jamie Reynolds Chronicles #1) by Casandra Charles
Little Black Lies by Sharon Bolton
The Merchant's Daughter by Melanie Dickerson
Harvest Moon by Leigh Talbert Moore
What He Resists (What He Wants, Book Nine) (An Alpha Billionaire Romance) by Hannah Ford