Read A Will To Murder Online

A Will To Murder 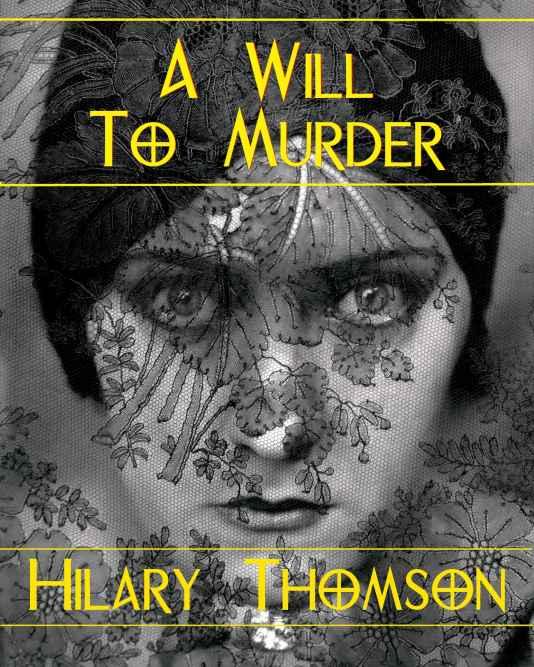 A Will to Murder

All rights reserved.   No part of this publication may be reproduced, distributed, or transmitted in any form or by any means, including photocopying, recording, or other electronic or mechanical methods, without the prior written permission of the author, except in the case of brief quotations embodied in critical reviews and certain other noncommercial uses permitted by copyright law.

Mr. James Elmont Boyle had decided to go for a quiet drive into the small Vermont town of Chichiteaux.  Mr. Boyle, a man of seventy-one, was short in stature and disapproving in temper.  His thin lips were often pursed below his speckled brown-and-white mustache.

He hung up the phone after calling Willowby in the carriage house and put on his heavy topcoat in the foyer of Rollingwood, though the day was quite warm.  Carefully, he placed his bowler hat on his head and checked its seat in the mirror of the coat closet.  James Boyle was one of the last men alive who still wore a bowler and thought the rest of the world terribly wrongheaded in having abandoned it.

He chose a cane from the umbrella stand, then called out to his housekeeper,  “Mrs. Marshpool!  I am going for a drive.”  An observer would note that Mr. Boyle had a very stentorian voice.

He walked out the front door and circled around to the carriage house in the rear.  This carriage house had two full apartments upstairs and four bays below available for the Rollingwood vehicles.  As he entered one of the bays, Mr. Boyle’s mood lightened when he saw his Mercedes-Knight Town Car.  This vehicle, built in 1913, he loved better than any living human.

Young Willowby, the chauffeur, was wearing the proper black duster and visored motoring cap.  The chauffeur opened a car door politely for his employer and waited.  Willowby had just returned from his vacation this morning, and he had been working on the Mercedes all day.

Mr. Boyle chose to linger by the engine, lightly stroking the Mercedes-Knight’s warm brown hood with restrained affection.  The black trim had an elegant luster, and the spindle-spoke wheel rims were beautifully polished.

“You washed her this morning, didn’t you Willowby?”

“Yes sir.  Still wish you would have her engine chromed, sir.”

“That will be enough,” replied Mr. Boyle sharply.  “Chromed engines are for--
hot rodders
.”

The full horror of this lingered in the air.

“We go to Chichiteaux, Willowby.”

“Is there any place you wish to stop in town, sir?”

“Of course not.  I only go to let the citizens admire my car.  I’m sure it does them good, giving them the chance to reflect that if they possessed one iota of taste or money they would own a Mercedes-Knight, too.”

Mr. Boyle paused a moment to inspect the corkscrew-shaped brass horn he had purchased at a recent car show, examining it to see if the chauffeur had polished it correctly.  Then he eyed the acetylene headlamps and nodded at their pristine condition.  After a final glance at the outside spare tire, Mr. Boyle climbed inside the car.

“Be sure to clean the carriage house today,” he said to his employee.  The old man gazed frostily through the crook of his cane as the chauffeur shut the door and climbed behind the vehicle’s right-hand drive.  The car started and left the carriage house, crunching its way along maroon gravel around to the front of Rollingwood.  There, the Mercedes-Knight joined the asphalt driveway that circled in front of the estate.  For Mr. Boyle, this would be the last time he would ever see his home.

The car sped up as it reached the quiet, two-lane highway.  Through the trees came occasional glimpses of sugar houses and woodpiles.  White board fences lined either side of the road, and Mr. Boyle shook his head in disapproval, thinking to himself that this made the landscape look like the horse farms of Kentucky.  But Chichiteaux’s gentrification committee had wheedled many farmers into swallowing their barbed wire and installing the board fencing instead, because the white wood looked so pretty against the colors of Autumn.  Mr. Boyle loathed the town gentrification committee.

The Mercedes-Knight entered Chichiteaux almost eight minutes later.  At nine minutes the car began to move down Douthit Street.  On the first block they passed the gas station and the post office on one side, and the yogurt parlor and the video store on the other.  On the second block they passed the Douthit Funeral Parlor.  Opposite the funeral parlor was the Chichiteaux County Court House, with its Greek pillars, snapping flags, and fine display of flowerbeds.  Chichiteaux was one of the oldest towns in the state of Vermont, and it boasted an unusual number of antique stores.  The sidewalks today were filled with antique hounds, who began to smile when they saw the Mercedes-Knight.  Mr. Boyle acknowledged their admiration with a lifted hand, which took a full two seconds to rock from side to side on its base.  It was a hollow wave akin to a hollow laugh.  A corner of James’ pursed mouth lifted slightly.

And then came the most hideous noise imaginable.  It was a deep booming thud, so close to the Mercedes-Knight that it seemed to be coming from the antique car itself.  More explosive booms followed, in perfect rhythm.

Mr. Boyle started violently, and his face turned a toxic red.  It was the sound of rap music being played at earthquake volume from a car.  He twisted wildly on his seat, trying to locate the offending vehicle.  Willowby too, was turning his head in bewilderment.  The Mercedes-Knight stopped.  So loud was the revolting music that the windows of the Mercedes-Knight were shaking in sympathetic rhythm.  Even the floor under James’ feet pulsed.  At first, the faces of the watching pedestrians blossomed with amazement, then understanding.  Then they began to laugh.

James was infuriated.  He couldn’t find the source of the disgusting noise.  A thought struck him, and Mr. Boyle whitened.  He realized that the vile music was inexplicably, mysteriously, unbelievably,
coming from his own car
.

The pedestrians were howling now, pointing at the Mercedes-Knight.

They were all laughing at him
.

A minute later, James Elmont Boyle was slumped forward against the back of the driver’s seat.  When Willowby tore open the door and felt for his employer’s pulse, it had already stopped.  Slowly, the chauffeur let go of the old man’s wrist.

“What could have killed him?” said the bystander in awe.  Rap music still sounded, thudding mysteriously out of the back seat of the Mercedes-Knight.

“He died of shame, sir,” said the chauffeur, stating the obvious.

The CD player and rap disc were discovered inside a secret compartment behind James Boyle’s feet, and no one knew how they had gotten there.

A couple of days later, in the city of Burlington, a young man and woman were sitting on a couch at the young man’s apartment.  The furnishings around them were mostly post-college castoffs, such as the hand-me-down computer on the wobbling desk, the cinder block bookcases, and the ugly yellow sofa they sat on.

The young woman wore a flowered blouse and skirt.  Her large, loose curls were almost too brown for her fair complexion and green eyes.  She was straightening her sleeves in an attempt to cover the large gap in the conversation.

He wore jeans, a sweatshirt, wire-rimmed glasses, and had hair that was unfashionably long.  One of his legs was drawn up on the couch as he tried to think of something to say, a thumb digging into his forehead.  This was Eric Maxwell, and his companion was Wendy Shearer.  The two were on their first and one-half date, having met a few hours ago when a journalist friend introduced them in a coffee shop.  Now, however, the talk that had flowed fairly easily in the shop had gummed up, once Eric had grasped that he was embarked on what is popularly known as a date.  They had already exhausted the topic of their jobs and had just discovered that she loved movies, dancing, and sports, and he despised all these things.  Maxwell’s interests were reading, writing, and thinking; all solitary activities, and his journalistic friend had been attempting to correct this.

“Well,” said Wendy.  “Why don’t we put on a CD?  I’m curious about your collection.  I don’t think I recognize more than a few of the titles.”

“Uh--,” Eric replied, squirming, “I feel it spoils both music and talk when they have to compete with each other.  Whenever I’m in a restaurant and they have live music I always want to kill the musicians.”

“Oh,” said Wendy.  She adjusted her blouse sleeves.  He hugged his drawn-up leg and labored for another topic.

“Then why don’t we watch some TV?  Maybe there’s something good on.”

“I don’t own a TV.  I got bored with it when I was eleven and stopped watching for good.”

A knock interrupted them, and Eric rose to answer the door.

“My printer’s broken--can I use your computer?  Thanks,” said Bradley Smith.  Smith was at Eric’s computer desk and clicking keys before Maxwell could reply.

Wordlessly, Maxwell stepped across the hall to Bradley’s apartment.  He returned carrying the printer and set it on the kitchen table next to the computer.

Wendy inspected the newcomer with curiosity.  Smith wore black leather boots, black leather pants, and a long cream jacket.  His hair was dyed platinum and cut just below shoulder length.  The effect was rather like Jane Fonda circa 1966, except that Bradley also wore the cheapest-looking jewelry Wendy had ever seen on a human being.  A rubber dragon was dangling from a shoelace around his neck, and he wore plastic rings on his fingers.  Both dragon and rings looked like they had come out of the gumball machines at a supermarket, which they had.

Irritably, Eric explained, “Okay.  Do you see this?  Pop the ink jet cartridge out.  Then you go to an electronics store, buy a cartridge that looks just like this one, and unwrap it.  Then you,” (here he demonstrated with the old cartridge) “slide it back into the printer exactly the way it was before.  There, do you see?”

“Oh.” Bradley was watching with fascination.

“Now you can go to the store and get your cartridge.  You shouldn’t need to use my computer.”

Bradley suddenly seemed to notice Wendy on the couch. “Oh, hello,” he chirped.  She lifted her hand in a languid wave.

“Is there any way you can get a cartridge right now?” asked Maxwell.

“I have one.  It’s on my shelves somewhere.”

With the grim air of a man who knew it was futile to ask his friend to go fetch it himself, Eric left the apartment.  Bradley stopped typing to ask, “Has he kissed you yet?”

“No,” replied Wendy, a little startled.

“Oh, God.  You’re just going to sit there all evening unless you kiss him.  He needs a prompt.”

“You seem to know him pretty well.  You’re not bothered by my presence here, are you?  I mean, are you two--you know?”

“
Eric?
Good God, no.  He’s straight.  He’s also incredibly boring.  Oops.  Um, I meant to say, um--he’s not very daring, which is more my preference in people.  But he’s interesting to hang out with--if you can get him talking, which isn’t easy.  He’s pretty shy, you see.”