It had been a fortnight since Thea had last seen Gabriel. At first, in her sympathy for him, she had not thought about what his leaving meant for her, but gradually, as the days stretched emptily into one another with no word, she had realized that her time with Gabriel was over. Oh, she knew that he would briefly return. Matthew was his nephew, and Gabriel would want to raise him, so he would come back to Chesley to take Matthew off to live at the Morecombe estate.

That would only increase her pain, for she would lose Matthew as well as Gabriel. Sometimes when she thought about it, Thea feared that she would be unable to bear losing them both. She loved Matthew; in the short time he had been here, he had stolen into her heart. Just as Gabriel had. It seemed absurd to think that she had at one time wondered if she was falling in love with Gabriel. It was so clear, so obvious to her now.

Both man and child had opened her up to love. To life. They had given her something precious, a joy and fulfillment that would always live in her even after they were gone from her. She knew that she would never willingly return to the dry, narrow path she had lived before. She was grateful for the added richness in her life, and she could never regret meeting Matthew or Gabriel.

But, oh, it was hard sometimes to remember that when she was alone.

Thea turned away from the view of the ruins, firmly blinking away the tears that threatened, and started back through the graveyard. Deep in her thoughts, she lifted her head as she rounded the corner of the church. And there, walking across the bridge toward her, was Gabriel.

Thea stopped, her breath catching in her throat, and for a moment she was unable to speak or even to think. Gabriel’s face was intent, and he strode forward purposefully. When he saw her, his face shifted, suddenly alight, and he hurried forward. Thea started toward him, her feet moving faster and faster. He was doing the same, picking up speed until he was running, and so was she.

They met in the churchyard, his arms reaching out to her, and Thea went into them without hesitation. He wrapped his arms around her, holding her to him tightly. The world spun around her dizzily; the only solid, secure thing in it was Gabriel, his arms like iron around her, his body warm against hers, his voice muffled in her hair.

“God, I’ve missed you!” He squeezed her more tightly for emphasis. “You don’t know how much. I’ve gone out of my mind the past few days, wishing you were with me. I should not have rushed off like that. I hardly knew what I was doing. It wasn’t until afterward that I realized that it would be even worse without you there.”

“I’m sorry.” Thea clung to him, scarcely able to believe that he was here, that her life was not being snatched away from her just yet. She had no idea how long it would last, but at least for the moment, Gabriel still wanted to hold her, be with her. “I know it must have been awful for you, having to deal with your sister’s death.”

He released her, moving back a little, but he did not break contact with her, still holding her hand as he gazed down at her. “It was hard. Worst was having to tell her mother. Rawdon stayed with me through it all. That helped.” Gabriel shook his head. “I wouldn’t say that we are exactly friends again … but just knowing that he had loved her, too, that we shared the same loss and confusion, that we’d both been in limbo the past year, waiting and wondering, somehow made it easier to bear. Myles joined us for the memorial service at the estate. And Alan. It was strange …” He sighed and started walking toward the church, still holding her hand.

“Strange not to have Ian?” Thea asked, matching her steps to his.

He nodded. “We were friends for so long. I knew him before any of the others. His mother was a friend of my mother’s. I knew he wasn’t perfect, but I would never have thought he could have done that.” Gabriel shrugged. “Well, he was always weak, I suppose. He didn’t have the toughness that Rawdon does—stupid, really, that it was that hardness that made me believe that Rawdon had hurt Jocelyn, and all the time it was Ian’s weakness, instead.”

They reached a bench outside the church and sat down. Gabriel took Thea’s hand between both of his.

“I stopped by the vicarage.” He smiled faintly. “I believe Matthew has grown in just the time I’ve been gone.”

“Did you see his new tooth?”

“Indeed I did.” Gabriel smiled, but it faded rapidly. “I’m sorry that his mother won’t get to see him grow up.”

“I wish … oh, I wish a hundred things had been different.” Gabriel sighed. “I had become accustomed to thinking of Jocelyn as dead, it had been so long since we’d heard from her. But now … it’s as if the wound has been reopened.”

“But at least you know that she meant to bring Matthew to you, that she still trusted you, loved you.”

He nodded. “She was trying to return home, and that brings me some peace. I know now what happened, why Jocelyn left and where she went; we no longer have to wonder. And I understand why she hid it from me.”

“Yes. She gave her heart to the wrong man.” Gabriel glanced at her and then away. He shifted on the bench. He was acting, Thea thought with some surprise,
nervous
. Abruptly, he stood up. “Thea, there is something I must ask you.”

Thea’s heart clenched within her chest. It was coming now, she thought—he was about to tell her that he planned to return home and take Matthew with him. Her brief period of happiness was over. She wanted to turn away, to run from him rather than have to hear the words, but Thea made herself stay. She had always believed in facing whatever came straight on. So, clasping her hands together in her lap, she looked up at him, waiting.

“I planned to do this the night of the Twelfth Night party,” he started, not looking at her. “I began right before we went to the masque ball that night, you may remember?”

“I do recall you said we would talk about it afterward,” Thea said stiffly. Had he already been planning to leave then?

“Yes. Then everything happened. And, well …” Startling her, he dropped down on one knee before Thea and took her hand. “Miss Althea Bainbridge, will you do me the honor, the very great honor, of giving me your hand in marriage?”

Thea stared at him, unable to speak.

Gabriel raised an eyebrow. “Thea? Don’t leave me hanging. I am making you an offer.”

“Gabriel!” She giggled, even as tears started in her eyes, and her hands flew to her mouth. “Oh, Gabriel! You can’t be serious!”

“I do believe I have rendered you speechless.” He chuckled, pulling her up and linking his hands behind her waist. “Come, my dear, I will help you. Just say, ‘Yes, Gabriel.’”

“But you are a lord, and I am a nobody. I am sure everyone would be shocked to see you marry a vicar’s daughter. And a spinster, as well.”

“I have no plans to choose my wife based on what others think.”

“But you are so handsome that all the girls doubtless drool all over you, and I am plain.”

“What a very off-putting picture you draw.” He bent to kiss her forehead lightly, following it with kisses brushed on the tip of her nose and the curve of her chin. “And you are not plain. You have beautiful, wild, silky hair that I want to bury myself in, and you have the most speaking gray eyes. And the longest, most devastatingly gorgeous legs.”

“Not I. Look at me.” He assumed a stern face and pointed with his forefinger to his vivid dark eyes. “I have the vision of an eagle. You, on the other hand”—he reached up and plucked her spectacles from her nose—“have to wear these to see. Which of us do you think sees more clearly?” He leaned down and kissed her again, his mouth lingering. “Now say, ‘Yes, Gabriel.’”

“Are you really certain?”

“I have never been so certain in my life. You are the woman I want to spend the rest of my life with. The woman I want to raise Matthew with me. To bear my children. I cannot picture growing old without you. You are all I want. I love you, Thea.”

“Then why are we shilly-shallying about here? Just say—”

Her words were cut off as his mouth covered hers.

We hope you enjoyed reading this Pocket Star Books eBook. 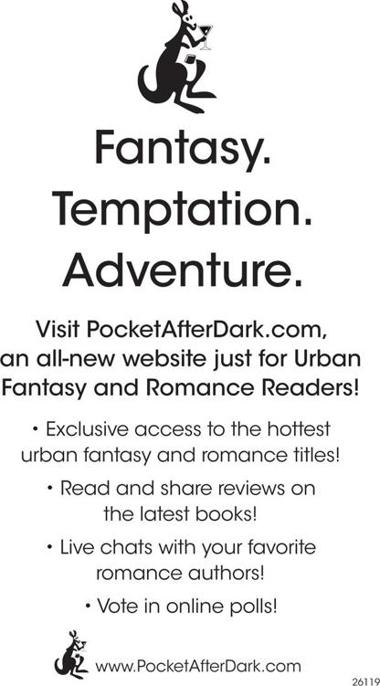 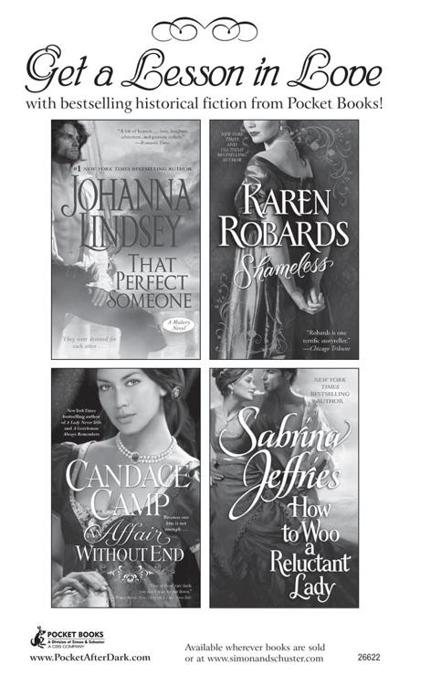 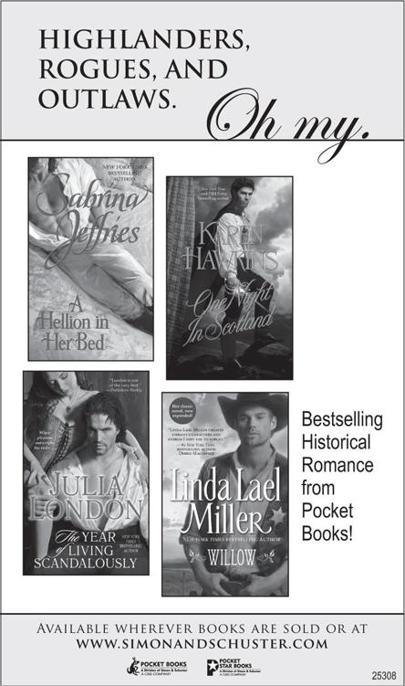 Earth Flight by Janet Edwards
Leaving Dreamland by Jessica Jarman
Teach Me by R. A. Nelson
Sealed with a Kiss by Mae Nunn
Capitol Murder by William Bernhardt
Bound Hearts 07 - Shameless by Lora Leigh
Dark Nights by Kitti Bernetti
A Loop in Time by Graham, Clark
Return to Sender by Kevin Henkes
BITTEN (Book #3 of the Vampire Legends) by Emma Knight