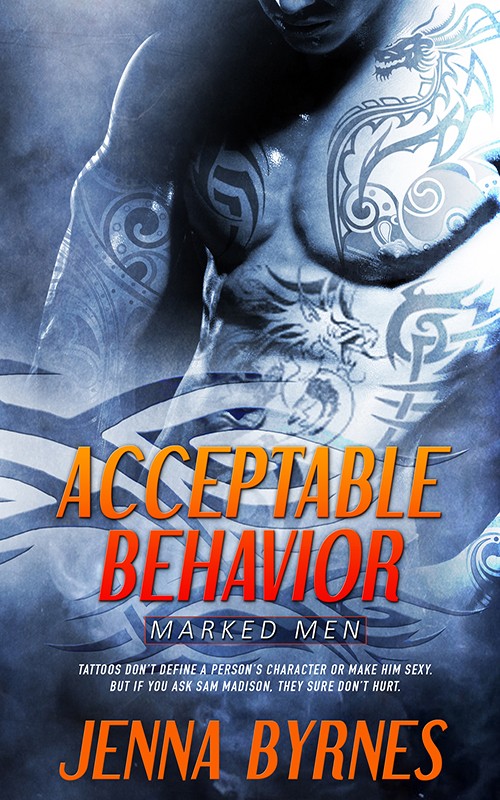 Book one in the Marked Men series

Tattoos don’t define a person’s character, or make him sexy. But, if you ask Sam Madison, they sure don’t hurt.

Dr. Travis Nelson has a passion for ink but keeps his many tattoos covered by long sleeves and trousers. He’s aware that as a pediatrician he’ll be judged not only by the other physicians in his practice, but also by the parents of his young patients.

When Sam Madison takes his young nephew, Levi, to be seen for an ear infection, he’s immediately attracted to Travis and the feeling is mutual. But Sam’s sister Melanie is going through a rough time and caring for Levi, and covering her obligations, keeps Sam occupied. He feels like he’s in no position to start a relationship.

Travis sees things differently, though he’s unable to truly understand the deep bond and connection Sam shares with his twin. As Melanie’s life goes from bad to worse, Sam is forced to make difficult decisions. Is protecting Levi enough of a reason for the two men to stay together, or will fighting for the child ultimately tear them apart?

To J., even though you never could get that first tattoo!

Over the Rainbow
(Israel Kamakawiwo’ole): Harold Arlen and EY Harburg

“Ouch, that hurts!” The child jerked his arm away and looked up with an irritated expression on his face.

Dr. Travis Nelson released his grip on the boy and ruffled the youngster’s hair. “Sorry, champ. Looks like you have a broken arm.” He turned to the child’s mother. “The X-ray shows it’s a slight fracture, but it’ll heal better in a cast. I’m going to have the nurse call over to the orthopedics office and see when they can work you in. We’ll give you the films to hand carry. Hang tight here for a few minutes.”

“Thank you.” The relieved woman smiled at him gratefully, then batted her eyelashes. “I really appreciate it. The other moms on the playground were right. You’re the best.” She crinkled her nose.

“Don’t mention it.” He opened the door and motioned for his nurse to follow him out. Travis looked at the boy one more time. “Sit tight here for a bit, Jason. Nurse Izzie will be back with some instructions for your mom, and we’ll see if she can’t find a toy for you.”

“Thank you.” The child offered a small smile in return.

Travis pulled the door closed behind his nurse, Isabelle.

Izzie made a note on the paper chart then grinned up at him. “Four out of five moms on the playground recommend Dr. Travis to heal their child’s boo-boos.”

He blinked at her, a serious expression on his face. “Only four out of five? What happened to the fifth one?”

He laughed. “Yeah, well, maybe if we put the word out that I am, too, I wouldn’t feel like I had to take you along for protection every room I went into.”

“Nah.” She shook her head. “We might lose too much business. Let the moms keep their fantasies. It’s our job security.”

“Whatever. Get Jason an appointment with the ortho guys, will you, please? Copies of the X-rays for his mom to take along. And a toy.”

Izzie scanned her notes. “Ortho, X-rays, toy. Check. Janel’s in room two with your next patient.”

“Check.” He smiled at her then went to the next exam room, pausing to wash his hands just before he entered. He grabbed the chart and examined it quickly. Levi Madison was a six-year-old male with fever, ear drainage and loss of appetite.
Ear infection
. The nurse had pegged it. He just needed to confirm the diagnosis.

He opened the door and went in. A thin boy with curly blond hair sat on the exam table. “Hi, Levi. I’m Dr. Travis. I hear you’re not feeling well today.”

The boy shook his head.

“Well, we’re going to have a look and see if we can’t get you fixed right up.” He turned to the chairs next to the table and was surprised to see a man rather than a woman accompanying the child.

And what a man! He sported the same curly blond hair as the child, just long enough to cover his ears and collar. His eyes were clear blue, and there was a small tuft of hair below his bottom lip.
A soul patch
. Travis tried not to focus on the lips, but they were as pink and perfect as any he’d ever seen.

When he rose, Travis could see that the guy was an incredible specimen. About the same height as Travis, this guy’s physique displayed firm muscles in his arms and flat abs covered by a thin T-shirt. He wore tight, faded jeans that were ripped in several places. Travis thought—he
thought
—that he could see the outline of a large cock running down the inside of one thigh through denims. He could have drooled, but he had enough professionalism to control himself. “Mr. Madison? I’m Dr. Travis Nelson.”

“Sam Madison,” he confirmed and extended his hand.

Travis grasped it and shook. The hunk’s grip was warm and strong, not clammy or weak.
Of course it is
. What else would he have expected from a man that fine?
Focus, Doc.
He cleared his throat. “So, how long has Levi been running a fever?”

“A couple of days, I guess. His mom didn’t say for sure. But it’s not getting any better, and now he doesn’t have an appetite. He says his throat isn’t sore.”

Travis nodded.
His mom didn’t say for sure. Does that mean Dad doesn’t live with Mom?
His mind wandered, conjuring up scenarios. They all led to the same conclusion. If Sam had a child and the mom was still in the picture, he was more than likely not gay.
Too bad.

He sighed
. Ah, well.
Doctors need fantasies, too.
He pulled an otoscope from his pocket and turned to Levi. “Let’s have a look in those ears.” He inspected both ears and found them inflamed with drainage. Travis listened to the boy’s breathing, checked his mouth and assessed the vital signs on the chart. “Well, this doesn’t look too bad.” He glanced in the ears one last time and spoke to the nurse. “Otitis media.”

“Yes, Doctor.” Janel made her notes in the chart. “You want amoxicillin?”

He turned back to the father. “Any antibiotic allergies?”

The handsome man looked confused for a moment. He looked at Levi. “You’re not allergic to any medicines, are you?”

Sam glanced at Travis and shrugged. “I guess not.”

Travis hesitated, uncertain about taking the word of the child.
If I had a kid, I sure as hell would know if he had a drug allergy.
“You’re not sure? Has he had many ear infections?”

“I don’t think so.” Sam looked at Levi again. “Do you get sick like this often?”

Hmm.
Travis wondered if Sam was a ‘weekend dad’. They saw that pretty often on Fridays. He turned to the boy. “Have you taken antibiotics before? The kind I’m considering is pink, and you take it by mouth three times a day.”

“That’s right, the pink stuff.” Travis gazed back at Sam. “If you don’t know his history, I’d feel better if we had access to records from his last pediatrician.”

Sam appeared uncomfortable. “Honestly, Doc, I don’t think he’s ever had one before. His mom’s always just taken him to the free clinic or the County Health Department for shots. I know he’s had those—he had to be up to date when he started school.”

“True.” Travis felt a little better knowing at least that much. He couldn’t help but ask, “Does he have insurance?”

The father shook his head.

“Okay, well, listen. I’m going to write you a prescription for amoxicillin. Take it to any pharmacy. This stuff is cheap, like, four bucks. It has to be refrigerated, and he has to have it three times a day. If you can get it filled this afternoon, give him two doses today, and start again in the morning, three times a day. Continue until it’s gone. Don’t stop once he’s feeling better. Can you do that?”