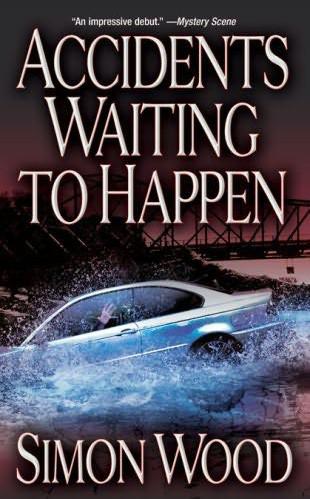 This book is comprised of works of fiction.

All names, characters, businesses, organizations, places, events and incidents are the product of the author’s imagination or are factiously used.

Any semblance to actual persons, living or dead, real events or locales is entirely coincidental.

Simon Wood is an ex-racecar driver, a licensed pilot and an occasional private investigator. Simon has had over 150 stories and articles published. His short fiction has appeared in a variety of magazines and anthologies and has garnered him an Anthony Award and a CWA Dagger Award nomination, as well as several readers’ choice awards. He's a frequent contributor to Writer's Digest. His books include
Working Stiffs, Asking for Trouble, Paying the Piper, We All Fall Down
and
Terminated
.

How much are you worth and to whom?

Josh Michaels is worth more dead than alive. He just doesn’t know it yet. He has no idea why someone would try to kill him, clearly that’s exactly what happened. When an SUV forced Josh’s car off the road and into a river, it might have been an accident. But when Josh looked up at the road, expecting to see the SUV’s driver rushing to help him, all he saw was the driver watching him calmly…then giving him a “thumbs down” sign. That was merely the first attempt on Josh’s life, all of them designed to look like accidents, and all of them very nearly fatal. With his time—and maybe his luck—running out and no one willing to believe him, Josh had better figure out who wants him dead and why…before it’s too late.

Praise for
Accidents Waiting To Happen
:

“One of the most riveting first chapters I have read in some time. The pacing is spectacular and gets progressively faster as the reader nears the finale. An unqualified recommendation.”

“Simon Wood...delivers a suspenseful, brisk tale in his debut.”

“What a thrill ride!”

“Events escalate in
Accidents Waiting To Happen
at break- neck speed. The thought that the plot could be a reality in today's world is shocking, to say the least. The suspense builds in each chapter, the plot thickens, and I could not put it down. Debut author
Simon Wood
is a welcome addition to the thriller/suspense genre.”

“
Accidents Waiting To Happen
is a thriller at its best.”

— I Love A Mystery

“
Accidents Waiting To Happen
is a briskly plotted thriller that uses point of view shifts better than any novel I’ve read in quite a while in his debut.”

Excerpt from Simon Wood’s
WE ALL FALL DOWN

Josh Michaels took liberties with the speed limit on the quiet, two-lane highway.

And why shouldn’t he?

His meeting with the supplier had proved worth the overnight stay in Bakersfield.

He was looking forward to his performance bonus when the drinking water plant came online.

He rewarded himself by taking the winding highways instead of I-5 back to Sacramento.

He enjoyed the challenge of the sharper bends and shorter straights that he couldn’t experience outside of a racetrack.

The lack of patrolling police cars on the back roads gave him the opportunity to bend the law as much as he wanted.

And goddamn it, the reason he used the highways and not the freeway was because it was fun.

One hand on the wheel, Josh removed his cell phone from his shirt pocket.

He selected a speed dial number and the phone chirped in his ear as it dialed.

“Hi, can I speak to the lady of the house, please?” Josh said pleasantly.

“My darling wife, how are you?

It’s good to hear your voice.

I’ve missed you so much.

Have you sent the adoption papers off so we will be free of our troublesome daughter?”

You found me out,” Josh said smiling.

“I knew it was you when you started speaking.”

His daughter sounded unimpressed with Josh’s poor attempt at deception.

“I wouldn’t make a very good superhero would I?” Josh said, now grinning.

“No,” she said disapprovingly.

Josh heard his wife speaking to his daughter in the background.

“Yes, it’s daddy and he’s talking about giving me away again,” she said to her mother before returning her attention to Josh, “Here’s mommy.”

“I wish you wouldn’t say that stuff to her,” Kate said.

“She’ll believe you one day.”

“I hope she does, because if she doesn’t, you can pay for her therapy.

Anyway, where are you?”

“I’m about thirty minutes away.”

“Are you going back to the office?”

“Okay then, see you later.”

“See you about four.”

Josh hung up and punched in his office’s number.

He filled in the project manager on the site visit, the quality assessment and the new contract price.

Josh promised to give him a full update in the morning.

He hung up and put the phone on the seat next to him.

With the calls out of the way, he settled into the final part of his drive.

He slowed for another of the small towns that littered the seldom-used highway.

These once vibrant townships were now forgotten, squeezed out by all-powerful cities.

These tiny places with forgettable names and a few hundred residents relied on passing trade for survival and barely received it.

Storefronts displayed the names of the proprietors who ran them.

There weren’t enough consumers to warrant a franchise.

Leaving the town, he accelerated up to seventy-five.

The road unraveled before him, snaking across the land like an asphalt ribbon.

Cresting the hill, the road fell away towards the Sacramento River some two miles ahead.

The Ford gathered speed on the descent.

Josh glanced over at the rearview mirror and spotted a black SUV in the distance.

The vehicle not only barreled along at the same speed as Josh, but exceeded it.

It was reeling in Josh’s Ford in short order.

He checked his speedometer.

“Someone’s in a bigger hurry than I am,” he murmured to himself.

Over the next quarter mile, Josh watched the SUV in his mirrors close in on his tail, until its large, chrome radiator grill blotted out his view.

Instead of passing, the black sports utility clung to the Contour’s bumper.

“Pass me, damn it,” Josh shouted at the tailgater.

As if answering Josh’s request, the SUV darted out from behind him onto the left-hand side of the road.

Side by side, both vehicles charged towards the steel truss bridge spanning the Sacramento River like it was a finish line.

The SUV's chunky tires whined on the road and their sound droned in Josh’s ears.

The vehicle eased past Josh without effort, but Josh backed off the gas to help the tailgater on his way.

The SUV’s rear was just ahead of the Ford’s hood, when without warning it swerved back into his lane.

Josh stamped on the brakes and yanked on the steering wheel.

The power steering exaggerated his intentions, jerking the car violently to the right.

The vehicles missed each other by a distance that couldn’t be measured in inches.

Josh’s car left the road for the dirt shoulder.

The Ford slithered on the slippery surface, fishtailing and kicking up plumes of dust as the tires fought for traction.

Cursing, Josh struggled to get the car under control, his actions as frantic as the vehicle’s motions.

The bridge was ahead and the river loomed. Josh’s Ford raced past the guardrail dividing the road from the shoulder.

There was no getting back on the road.

There was no stopping the car in time.

Did the tailgater know what he’d done?

He squeezed the brake pedal even harder.

Man and machine working in perfect harmony failed to stop the car in time.

The Ford leapt off the riverbank, trimming the tops of the scrub bushes as it went.

Airborne, the car’s nose pitched forward and it arced downwards.

The dark waters rushing up towards Josh filled his vision.

Fear grabbed him when he saw his fate.

His hands gripped tightly onto the wheel and his fingernails cut grooves into his palms.

He continued to jam his feet on the brake pedal in the vain hope it would prevent the car from ever hitting water.

The weightless feeling in his stomach made him nauseous.

He wanted to slam his eyes shut, but morbid curiosity kept them open.

The Era, 1947-1957: When the Yankees, the Giants, and the Dodgers Ruled the World by Kahn, Roger
Seduced by the Football Player by Dez Burke
Payback by Graham Marks
Shadows on the Stars by T. A. Barron
Shark Bait (The Grab Your Pole Series) by Cooksey, Jenn
The Smoke is Rising by Mahesh Rao
The Sugar Mother by Elizabeth Jolley
The Number 8 by Joel Arcanjo
Luckstones by Madeleine E. Robins
The Naughty Angel Returns (Naughty Angels In Love) by Jans, Honey