Read According to Their Deeds Online

According to Their Deeds 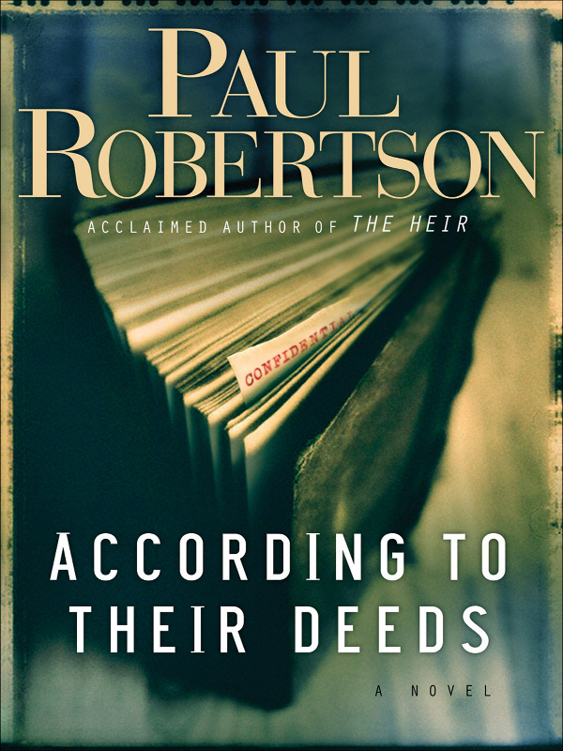 "... a suspense-filled, Christian-themed tale in which justice and mercy become something more than abstractions...." --Tim Davis, Bookloons.com

"The dialogue... is without a doubt the most clever I have ever read.... I would highly recommend this book...." --Susan Miura, FaithfulReader.com

A Deadly Game of Justice Versus Mercy Charles Beale lives outside the shadow of Washington, D.C. Politics and power matter only when a client crosses the Potomac to visit his Alexandria Rare Books shop. But that all changes when a former client--a man deeply connected in the Justice Department--is found murdered after a break-in gone bad. When Charles reclaims at auction the books he'd once sold, he quickly discovers he's bought more trouble than he could have ever imagined. Inside one volume are secrets. A collection of sins that, if revealed, could destroy reputations, careers--even lives. Charles soon learns he isn't the only who knows. Going to the police means ruining a multitude of lives. But staying silent puts a target on his shop, his wife--and himself. Charles must decide: Should one mistake really cost you everything?

ACCORDING TO
THEIR DEEDS

According to Their Deeds

ACCLAIMED AUTHOR OF
THE HEIR

ACCORDING TO
THEIR DEEDS

According to Their Deeds
Copyright © 2009
Paul Robertson

I am dedicating this book to my father,

Let me tell you about him.

My earliest memory is of him reading. Even now, these many years later, it’s not hard to find a present for him. I get him books.

His life is a demonstration of his values: God and family, education and responsibility, serving and living peacefully. My three brothers, my sister, and I can all tell you how wise, generous and accepting he is. He has been married fifty-three years (so far), has nineteen grandchildren (so far), and the tale of his great-grandchildren has only begun. He is a scientist and a teacher, he is respected by everyone who knows him, and he still reads more than I do.

I know that God my Father is loving, dependable, and a strong foundation for my life. I know because my own father has been all those things for me. My father is dedicated to his Savior, and I learned that from him, too.

Lisa, we made it through another one together.

. . . and books were opened . . . and the dead were judged
from the things which were written in the books,
according to their deeds . . .

Only one chair was empty.

“Sixteen thousand. Do I see seventeen?”

Charles slipped into the open seat. He paged through the catalog.

“The bid is seventeen. Do I see eighteen? Thank you, eighteen thousand dollars. Nineteen?”

A man beside him, in thick black-rimmed glasses, leaned over.

“Which lot are we on?” Charles asked.

“Twenty. The bid is twenty thousand dollars. Do I see twenty-one?”

Gold sconces on the pale blue walls pooled light on the white ceiling, and gold and crystal chandeliers showered light down on the fifty dark blue upholstered chairs. The carpet was even darker blue and very thick, a deep river, soaking up every sound but the auctioneer’s voice.

The crowd was darkly upholstered as well.

A wide young man in the front row lifted a wood paddle.

“Twenty-two, thank you. Do I see twenty-three?”

He did, somewhere else in the room.

“Everything’s going high,” the man in the glasses said. “Too many out-of-towners. I just wanted to buy back what I sold the guy, but I haven’t won a bid yet.”

“That guy with the frizzy hair, he looks like Einstein? He’s from a big New York showroom. And up front, in the brown suit, he’s from Houston. And that guy’s from L.A. Everybody else has dropped out.”

“The bid is twenty-eight thousand. Do I see twenty-nine?”

“Like I said, it’s all going high,” Norman said.

“Oh, yeah. Everything’s real nice, all of it. The guy had great taste. Too bad he’s gone, he was a great customer. But that desk, I’d have said twenty-six, twenty-eight for it, and we’re blowing through thirty without a hiccup. But I don’t do furniture, so what do I know.”

Every sound of conversation sank into the carpet’s downward pull. Wooden paddles rose and fell, or waved like water lilies on bottomless currents.

“I’m glad there was an empty seat,” Charles said. A dozen people were standing at the back wall.

“A guy I knew was sitting there a minute ago.”

“Thirty-four. Do I see thirty-five? The bid is now thirty-four thousand. Any bid?”

There seemed not to be. Mr. Einstein from New York, with his wild white hair and black mustache, had bid last and now stared straight and smugly forward.

“Thirty-four thousand. Going once, twice
—” The auctioneer’s eyes darted, reacting to some new movement deep in the room.
“Thirty-five, thank you. The bid is now thirty-five thousand. Do I see thirty-six?”

Heads turned and searched, but Mr. Einstein himself hardly reacted to this new unknown. He only raised his own paddle.

“Thirty-six. Do I see thirty-seven?”

He did, and everyone else did as well. A woman in a light gray suit and very improbable blond hair, standing against the back wall. She held her paddle out like a sword.

“Not much of a description,” Norman said. “Is there something special?”

“It’s historic. Derek was proud of it.”

Charles didn’t answer. The bidding advanced, a conflict of deliberate and formal violence.

“Because that could be worth a premium,” Norman said. “They’d clean it up, right? They wouldn’t sell it with blood all over it. But you’ve got to be careful cleaning those old finishes. You can take them right off. I think it was a lot of blood, too.”

The formal quiet and the auctioneer’s drone stretched a placid surface across the room. All that could be seen was slow and purposeful, apparently calm. But a tension was growing between the two bidders, like monsters beneath the surface sensing each other and edging into battle.

“Fifty-four. The bid is fifty-four thousand dollars. Do I see fifty-six?”

“Fifty-six. Do I see fifty-eight?”

The blond woman’s impudence was finally getting to the man from New York. He waved his paddle defiantly. It was, in the depths, a first ripping by sharp teeth; anger had been provoked.

“Thank you. The bid is sixty thousand. Do I see sixty-five? Sixty-five, thank you.”

“Do you know who she is?” Charles said.

“Sev-en-ty-five.” Mr. Einstein had spoken it aloud, each syllable a separate word.

“Seventy-five. Do I see eighty?”

“Eighty. The bid is eighty thousand. Do I see eighty-five?”

“One hun-dred,” Einstein said. The room gasped, every person, at the three distinct syllables.

“One hundred thousand dollars. Do I see one hundred five?”

Without hesitation, the woman thrust her paddle straight up, and through.

The man set his paddle under his chair.

It was over, suddenly. A leviathan had been vanquished and now sank away into ultimate deeps.

“One hundred five thousand. Do I see one hundred ten?”

“Not likely,” Norman said. He would have been too loud, but the carpet sucked his voice right out of the air. “A hundred five, that had to hurt.”

The victor had wounds to nurse, but the battle was past.

“What was that?” Norman said. “Fifty was way over the line! A hundred grand? Now that was crazy!”

Ripples of conversation troubled the surface but that was all; the deeps were now still.

“There must be a reason,” Charles murmured. The room was filled with murmuring.

“So we’re back to normal,” Norman said. “Thirty-two hundred’s high, but just a little. I guess when people fly in from up northeast and from the coast, they don’t want to go home empty-handed.”

“It’s a large collection,” Charles said. “It would pull people in from all over.”

“I wish they’d stayed back where they came from. But if it’s even just the dealers he bought stuff from, it could be this many people. The guy bought all over the place. All I wanted to do was buy back the stuff I sold him.”

“Yes. I think you mentioned that.”

“But it’s all going too high. I’m not going to spend more on a lamp than I can sell it for. At least that blond lady is gone.”