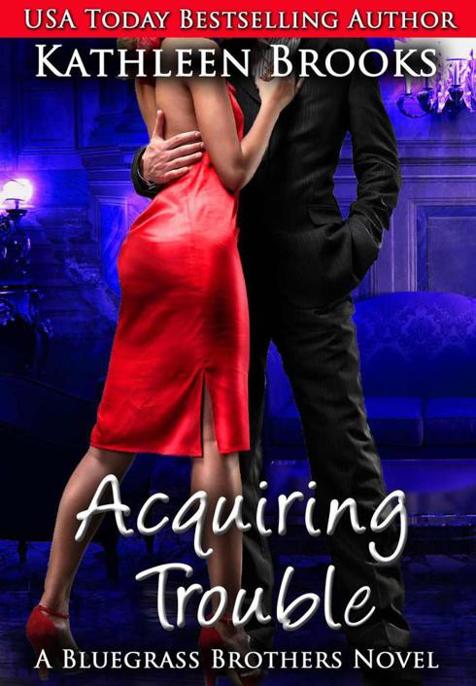 All Rights Reserved. No part of this book may be used or reproduced in any manner whatsoever without written permission, except in the case of brief quotations embodied in critical articles and reviews.

This book is a work of fiction. The names, characters, places, and incidents are products of the writer's imagination or have been used fictitiously and are not to be construed as real. Any resemblance to persons, living or dead, actual events, locale or organiza
tions is entirely coincidental.

Thank you to Mrs. O for
taking the time to teach
me about PTSD in our soldiers. There are so many wonderful
organizations providing care to our men and women in service.
I encourage
everyone
to learn how you can help.

As always, thank you Chris, Milo, Marcia, Craig, Karen, Jan
, and
Calista
for your
hard
work.
I am thankful to have such a wonderful team of people to work with.

Other Books by Kathleen Brooks

Excerpt from Maid for the Billionaire by Ruth
Cardello

Excerpt from The Prince of Pleasure by Sandra
Marton

Miles Davies leaned against the wall and took a sip of beer out of the red plastic cup he held.
He glan
ced around at the people
dancing in the living room of his best friend's house as the band played. His friend
, Josh,
was currently shirtless as he pounded away on the drums while playing some Green Day song.

It seemed as if this memory would live in his mind forever. He couldn't believe he had j
ust graduated from high school and soon everyone in the room would be drifting off all over the country.
Josh
was off to the University of Louisville
while
he was going dow
n to Texas A&
M at the end
of summer
—h
opefully not alone.

Miles looked up from
his beer to see the breath
takingly beautiful blonde in a tight white dress
, pearls around her neck
and
wearing
cowboy boots
,
sauntering to
ward
him.
Her perk
y
breast
s
bounced and drew his attention as
a braless
St
acy Thomas, the captain of the c
h
eerleading team
,
approached him.

He ran his hand over shoulder-
length brown hair and pushed a stray lock behind his ear. Stacy stopped in front of him and
shot him
a smile that went straight to his groin. She reached her slender hand out and took his red cup from him. She wrinkled her nose at the
smell, but took a drink anyway.

"I don't know how you men can drink this stuff."

"I know what I have a taste for, but I can't get it here in the middle of a roomful of people," Stacy's perfectly pink bottom lip stuck out slightly as she pouted. Miles felt her eyes roaming his b
ody and he responded instantly.

"I can go see if Josh's room is empty while your girls
steal you away from me." Miles kept one eye on a group of cheerleaders making their way to their captain. "It's the last room on the right. Come find me when you're done. There's something
I want to ask you about so
don't let th
em
keep you
too long." He leaned down and captured her lips in his. He plunged his tongue into her mouth just long enough to have her leaning into him. There. That should hurry her up.

Miles smiled at
the gagg
le
of girls now surrounding their leader and headed down the hall, past the keg, and into his friend's room. It was quieter down here and gave him the privacy he needed to gather his courage. Stacy had been
accepted
to Vanderbilt University's pre-med program. It's where her father had gone and where she was expected to go too. She was going to be sp
ending the summer shadowing
her father at the hospital. Miles was hoping that three years of dating was enough to sway her from that path.

He took a deep breath and
put his hand in his
pocket to finger the small thin
promise ring he had bought her. He was going to ask Stacy to transfer to Texas A
&
M so that they wouldn't have to do the long
-
distance
-
relationship thing. He'd already looked at apartments for them both and knew she'd say yes if he asked. She had hinted at it many times
over the past couple of weeks.

The knock on the door caused his breath to catch in his throat. He had never been so nervous! He watched as the
doorknob
turned and a big black boot appeared. He looked up in confusion and saw the pale white skin, in
k black hair
,
and vibrant violet
eyes of Morgan Hamilton.  Great, just what he needed. The bad girl of Keeneston
was
probably trying to sneak a smoke or take a swig of vodka in privacy before vandalizing the room. Who knew what she wanted, but it probably wasn't good.

He had once thoug
ht Morgan was nice, even pretty. B
ut that was before freshman year. Morgan's sister had wasted no time in showing everyone how little she thought of Morgan when she started high school. Her sister had been the
cheerleader captain
then
,
and between their dislike and Morgan's subsequent behavior it was clear she wasn't the type of girl Miles would ever go for.

She only wore black and she had dyed a streak of her hair purple. It matched her eyes perfectly, but he doubted she cared. Thick eyeliner coated her eyelid
s and
drew attention to her eyebrow
piercing
.

"
Morgan? Do you need something?" Miles asked her. He glanced at the clock
;
Stacy would be here soon and he wanted Morgan out before she arrived. Stacy hated Morgan more than any person in the world. "Morgan, what are you doing here?"
h
e asked again when she just stood there staring for a moment.

He saw her take a breath and then walk all the way into the room, closing the door gently behind her. She looked up and pinned him with her eyes. The violet shade darkened and he couldn't help but momentarily get lost in them.

"When faced with the probability of everyone going away to college or jobs outside of Keeneston
,
it seems as if tonight gives us a certain freedom to say and do things we've always wanted without fear of embarrassment or ridicule at school on Monday morning," she said confidently as she walked closer to him. Her voice was lower than Stacy's, but seemed to weave a spell around him.

"I suppose." Miles
felt his brow
f
urrow in confusion as he watched this little imp stop in front of him. She barely made it up to his chest, but
few
women did. He was six two and his cowboy boots made h
im even a bit taller than that.

"You were always kind to me, even when others
weren’t
. You helped me study for that math test sophomore year when no one else would be my study partner and you never pretended I was invisible. I really appreciate that. You were the only one who did so."

"You know, more people
would’ve
been kind if you show
ed your true self and didn't hi
d
e
behind this rebel, bad
-
girl attitude… and appearance."
He scanned her baggy black cargo pants, ratty Nirvana t-shirt and dark purple fingernail polish.

"Appearance
doesn’t
make a person!" Morgan said as she placed her hands on her hips and stared him down.

"See, that's why people weren't nice to you. You're so short and defensiv
e with people. Maybe if you acted
more like your sister…"

"Oh! My sister
—t
he
freaking
saint! I could never live up to her. No one could! Tell me
, Miles,
would my sister do this?"

Morgan grabbed his shoulders and pulled him down before he could even realize what was happening. Her lips, purple lipstick and all, were on his kissing him hard. He was shocked. Shocked by the fact that he liked it. Shocked when her aggressive tongue pushed into his mouth. Shocked that he felt full breasts against his chest
and
a
ha
n
d sliding down to cup his growing erection.
He couldn't help himself. He closed his eyes and lost himself in her intoxicating touch.