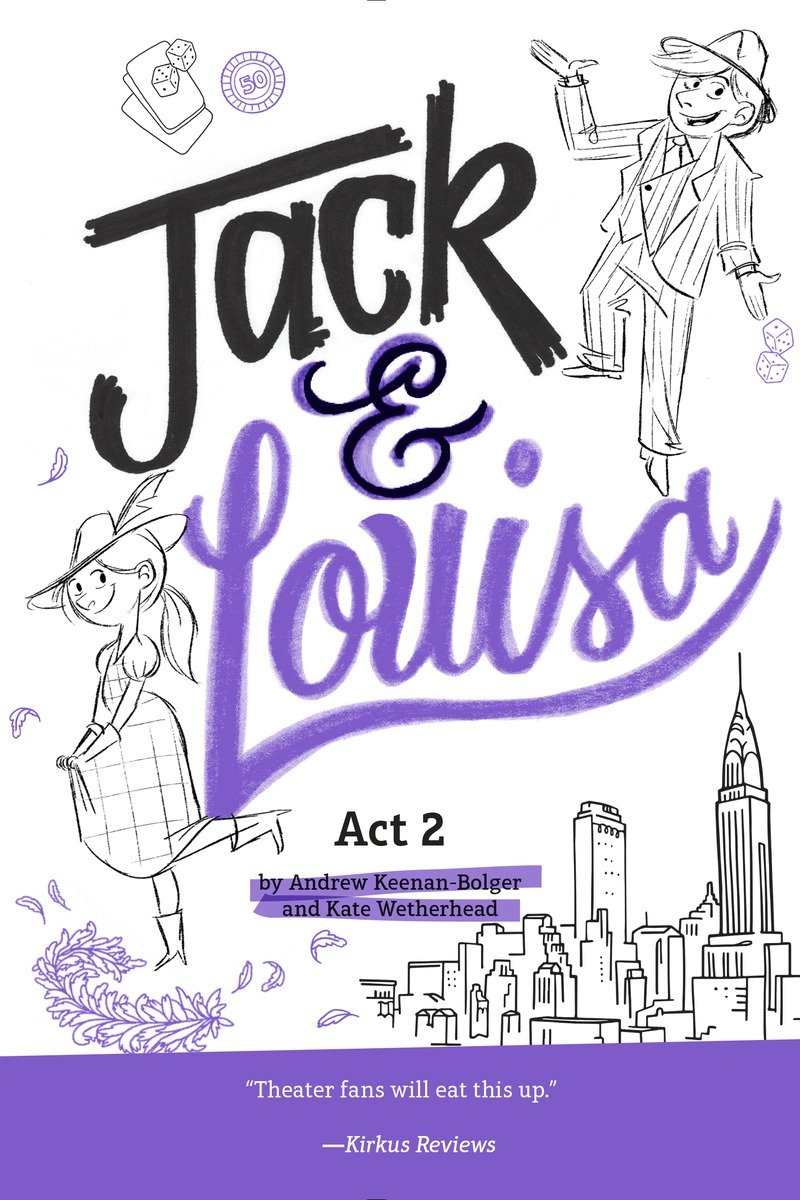 IN MEMORY OF ROGER REES,
A MOST EXQUISITE THEATER
NERD.

Everything was smaller than I had expected. More compact. The hallways were narrow, the ceilings low, the rooms tiny and warm from the mirror lights. But the sweet, musty smell was the same as any theater’s backstage, and I couldn’t decide what was more exciting—the things that surprised me or the things that were so familiar.

If I’d been told four and a half months ago that I’d be getting a guided tour of a Broadway theater from a former Broadway star who also happened to be my new best friend, I never would have believed it. And now here I stood, as close to my dreams as I’d ever been,
still
not quite believing it.

I turned to see Jack looking at me, amused. He must have known I was overwhelmed.

“Yeah,” I replied, thinking how interesting my life had become since Jack Goodrich moved in down the street from me.

In November, Jack and I had finished our run of
Into the Woods
with the Shaker Heights Community Players. The critic for the
Sun Press
had given it a glowing review: “Utterly enchanting,” he’d gushed. “Poignant . . . Beautifully acted and sung by a stellar cast.”

“I guess you’re used to getting reviewed by, like, the
New York Times
,” I’d said to Jack after reading the review to him over the phone.

“Are you kidding?” Jack had replied, incredulous. “A rave is a rave. Who cares who’s writing it?” I loved that he felt as proud of our show as I did.

Speaking of proud—not only did our entire seventh-grade homeroom come to see our show, but they all stood during the curtain call when Jack and I took our bows! Even Tanner Falzone, who had made Jack a target of his ridicule early in the school year, whistled
through his teeth like he was at a football game.

For the week following our run, it seemed like all of Shaker Heights was talking about our production of
Into the Woods
. I felt like a mini celebrity, like when the manager at Yours Truly Restaurant recognized me.

“Oh my god, you were so good as Little Red Riding Hood!” she exclaimed as she helped the hostess seat me and my parents. “So feisty.” When our entrees were cleared about an hour later, a complimentary brownie sundae was sent over.

“Woo-hoo, star treatment,” my dad said, grabbing one of the three forks provided and digging into the whipped cream. “I could get used to having a famous kid.”

At the dentist, the dry cleaner’s, the drugstore, people would come up to me to tell me how much they loved the show.

The same thing was happening to Jack, and I asked him if that’s what it was like for working actors in New York.

“Not really,” he said. “There’s, like, eight million people there, and most of them don’t go to
Broadway shows—tourists do. So it’s pretty easy to be anonymous.” We laughed at how much more famous he felt in Shaker Heights, Ohio, than he ever had in New York City.

Soon enough, though, our celebrity status faded away, brownie sundaes came with a price tag, and we went back to being regular seventh-graders. Our next shot at the spotlight wouldn’t be until second semester, when Mrs. Wagner, our music teacher, would be directing a production of
Guys and Dolls
. I was looking forward to it, of course, especially since the part of Adelaide was on my list of dream roles, but as far as Mrs. Wagner was concerned . . . Well, let’s just say that she wasn’t the greatest director. Her only objective was making sure that everyone could be seen and heard on stage at all times, which usually meant scene after scene of kids standing in a straight line, delivering their dialogue very loudly to the audience instead of to each other. She was certainly no Renee Florkowski, our
Into the Woods
director.

So sure, we had a show on the horizon, but it wasn’t going to be anything like what we’d just
experienced with the Shaker Heights Community Players. And it didn’t really matter, anyway. By early December, everyone had other things demanding their attention, like getting ready for the holidays.

“My parents and I are going to New York for New Year’s,” Jack announced one night while we were at his house doing our English homework. We were supposed to be answering questions about S. E. Hinton’s
The Outsiders
, a book title that was suddenly hitting a little too close to home.

“Wow,” I said, trying to conceal that jealousy, “how long are you going for?”

“Five days. We’re staying with my parents’ friends on the Upper West Side,” Jack replied casually. After all this time, it still bugged me how easy it was for him to talk about New York—like he was talking about a corner store or a gas station.

“Are you going to see any shows?” I asked, staring at a page from my book but not reading a word.

“Probably,” Jack said. “I have some friends
working right now who I should go support.”

Friends to support! On Broadway!
I mean, I always went with Jenny’s parents to her yearly ballet recital in Cleveland, but—no offense to Jenny—that just didn’t sound as cool.

“What are
you
doing for the break?” Jack asked, looking up from his homework. I hesitated, mortified to tell him.

I spent the next couple of weeks trying not to think about how different our winter vacations were going to be, choosing instead to concentrate on schoolwork and reminding myself that Uncle Dan made really good French toast. I’d never met Tina, but Dan had told me on the phone that she’d really liked the movie
Chicago
, so we’d “have lots to talk about” when they got to town. I wasn’t convinced.

For the most part, Jack did a good job of not talking too much about his upcoming trip, probably
sensing that it was a painful subject for me.

That is, until one day when we were riding the bus home from school and his cell phone chimed with a new text message. As he read the message, he let out a slight gasp and said, “I can’t believe it—my mom just got me a ticket to see
Let’s Make a Toast!
”

My heart sank. Jack and I had been obsessing over that show since we’d found bootleg clips of it on YouTube. It had recently opened on Broadway and starred the amazing Madeleine Zimmer, who Jack knew
personally
. I didn’t want to ruin Jack’s excitement, so I mustered a “That’s amazing!” and tried not to burst into tears.

As the bus pulled up to our stop, he said, “Hey, do you mind if I come over to your house for a little while? Both my parents are out.”

“Sure,” I said, slightly dreading the thought of having to spend the afternoon with Jack pretending I wasn’t sad.

But confusion replaced my dread as we entered my house to find both of our moms drinking tea in the kitchen.

“Hey, superstars,” my mom said as we approached, “how was school?”

“Good,” Jack said breezily, like he hadn’t just totally lied to me.

“Jack?” I said suspiciously. “I thought you said your parents were out.”

“Did you ask Mrs. Benning?” Jack asked her.

“Go ahead,” she replied, winking at my mom.

I looked from Mom to Mrs. Goodrich to Jack—all three of them now grinning at me like idiots.

“Tell me
what
?” I demanded, my heart beating fast.

Jack kept grinning as he spoke.

“About getting a ticket to
Let’s Make a Toast!
?”

“Well, that was only
half-
true. My mom actually got
two
tickets.” I felt a lump rise in my throat as I realized what he was saying.

Jack beamed at me, proud of his trick.

“Yeah—the other ticket is yours. Wanna come to New York with us?”

Jack’s hand waved in front of my face, snapping me back to reality—if you could call
this
reality. A heavily tattooed man carrying a wavy auburn wig on a Styrofoam head whisked by as I turned to Jack.

“I said, ‘Is this what you pictured a Broadway backstage would look like?’”

“Oh,” I said, looking around in wonder for the eight millionth time. “Sort of? I mean, not really, but maybe? I don’t know,” I stammered, nervously gripping my winter coat, “but it’s amazing.”

“The St. James Theatre actually has a larger backstage than most,” Jack explained to my astonishment.
There were places that were even smaller than this?

I watched in fascination as the actors nimbly maneuvered past us through the narrow corridor, loosening neckties and pulling bobby pins from
their wigs. Only minutes ago these same people had been
onstage
, singing and dancing in front of an ecstatic crowd. The show had been better than I’d hoped, with songs that would be stuck in my head for months. Jack and I had screamed ourselves hoarse during the curtain call. Now all of the people that we’d been cheering for from afar were checking their cell phones and debating which subway lines would get them home fastest. I was feeling awestruck by every single one of them when a newly familiar voice rang out: