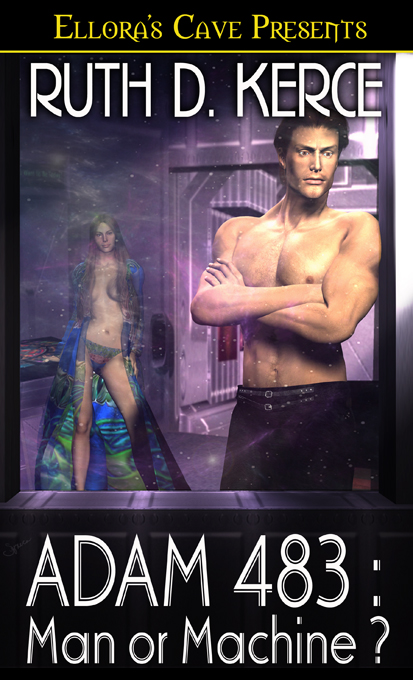 Other available formats (no ISBNs are assigned):

ALL RIGHTS RESERVED. This book may not be reproduced in whole or in part without permission.

This book is a work of fiction and any resemblance to persons, living or dead, or places, events or locales is purely coincidental. They are productions of the authors’ imagination and used fictitiously.

E-
rotic
love scenes are explicit, leave nothing to the imagination, and are high in volume per the overall word count. In addition, some E-rated titles might contain fantasy material that some readers find objectionable, such as bondage, submission, same sex encounters, forced seductions, and so forth. E-rated
titles are the most graphic titles we carry; it is common, for instance, for an author to use words such as “fucking”, “cock”, “pussy”, and such within their work of literature.

X-
treme
titles differ from E-rated titles only in plot premise and storyline
execution. Unlike E-rated titles, stories designated with the letter X tend to contain controversial subject matter not for the faint of heart.

Aboard the mineral freighter, H.C.S. Jenway, Tyree Samou sat in her quarters, studying the MW-12 star charts. The computer contained all the navigational information needed but she enjoyed the challenge of mapping the ship’s path by hand.

Her talent at charting, more than a hobby, came in handy whenever their data system blipped or went off-line. Once she had even maneuvered them safely past an asteroid field, after the nav computer had shut down because of a power drain.

She often felt born into the wrong century. Fantasies of navigating the high seas, before technology had taken that thrill out of man’s hands, haunted her dreams.

Even more enticing, in her sea-faring fantasies she indulged every eroticism she craved. Sexy-as-sin pirates took her body and soul to sexual heights she’d never experienced.

If only those fantasies were real…

A harsh buzz snapped her thoughts back to reality. Rarely did she work or even relax uninterrupted these days. The burden of a senior officer’s rank, she supposed. Her time as strictly a navigational officer with less responsibility had come and gone long ago. She pressed a button on the edge of the desk, unlocking the door. “Come.”

With a light swoosh, the panel opened.

Tyree’s gaze returned to her charts. “No need for such formality, Sheera. We’re alone.”

Tyree paused and sat back in her chair, her interest captured. “Business? Is there a problem? We lifted off from Jenway Station without incident. The ship and crew checked out perfectly.”

“While docked, your newly assigned, personal security bot came aboard.”

Tyree frowned. She hated the idea of some pre-programmed robot following her around. But in the last month, ore smugglers had made three attempts on her life. After finding out about it, her brother, the Ambassador of Jenway and the one in charge of her expedition, insisted upon sending along personal protection for her.

“Don’t sound so disgruntled. A lot of senior officers use them.” Sheera stuck her head out the door. “In here. The Captain will see you now.”

The doorway filled with a large presence, and Tyree’s breath hitched. “It’s a male.”

Sheera looked at her as if she’d lost her mind. “Of course. A male looks more intimidating to any aggressors lurking nearby and intending harm when you’re off-ship.”

Tyree stood and rounded the desk. She examined her new guard. Though a robot, she still felt uncomfortable with a male. Especially since regulations dictated he stay inside her quarters.

He stood over six feet, with dark wavy hair, deeply intense eyes, broad shoulders, a square jaw and something she couldn’t identify. He held himself differently than other robots, almost proudly. “He’s Cyborg?” she ventured warily, because Sheera was a friend who Tyree felt would admit to the truth.

“Of course not!” the woman responded quickly, sounding full of astonishment. “You know Cyborgs were outlawed five years ago.”

“That doesn’t mean the Governing Council eradicated them all. This bot is not standard issue. He looks too…real.” She preferred the days when a robot looked like a mechanical. At least she always knew who and what she was dealing with.

“Perhaps, but this situation leaves a bad taste in my mouth.” She circled him. Strong shoulders, tight butt. Nice. She stepped in front of him again and glanced between his legs. What started as a casual look, ended with her captured attention. He possessed a
very
noticeable bulge. Her body responded with an automatic rise in temperature.

At the sound of the woman’s voice, Tyree gave herself a mental shake. “Mmm.”
Capable of what?
She attributed her carnal reaction to simply being too long without a man, dismissed the feelings and raised her eyes to his.

He returned her stare without wavering.

A shiver raced down her spine. That direct look, as if he knew her every thought, intimidated her somehow. But she held her ground.

“What are you called, bot?”

If she didn’t know better, she’d swear a look of humor entered his eyes. “Adam? How original.” The human imagination never ceased to amaze her.

“Your brother said Adam was preprogrammed to serve you, so the installation of your personal computer chip isn’t necessary. I checked him out. He’s functioning fine.”

Tyree waved her hand toward him. “I don’t want a security bot. Shuttle him back down while we’re still in range.”

“You don’t have a choice. The orders were clear. Ambassador Samou will cancel our mission if you refuse.”

Her brother was more stubborn than a frozen engine coil. “Fine,” she huffed. “Leave us then. I’m weary and not prepared for an argument tonight.” She’d dispose of him, herself, later. Stick him down in storage somewhere.

“Yes, Captain. I’ll report to the Ambassador that Adam is in position,” Sheera replied. One eyebrow rose slightly with her direct stare. “And doing his duty.”

Tyree sighed. Her gaze switched from Sheera to Adam and back again. The woman knew her too well. Fine. “I will humor my brother in this, for now. But next time we set down on Jenway, he goes back.”

Sheera nodded. “As you wish.” She turned to leave, then slowed her steps, worriedly glancing at the bot on her way out.

She probably feared he’d be scrapped as soon as the opportunity arose. The idea held appeal.

Tyree studied Adam from head to toe. Tentatively, she touched his cheek. The skin felt like living tissue. Stubble even grew on his face. When he leaned into her touch, she jerked her fingers back.

And something else disturbed her. “You have body heat.”

“All circuits and engines generate heat.”

“Hmm, yes, of course.” She pulled a knife from her belt. “Give me your hand.”

Again, he obeyed without hesitation or change of expression. His large, strong hands and thick fingers caught her attention—the type of hands that made her fantasies soar.

The thought of him intimately probing her with those fingers made her blood run hot. His powerful, masculine aura aroused desires in her too long denied. With her curiosity now piqued, she felt like ordering him to drop his pants, so she could steal a look, and more, at what appeared from the bulge to be a rather large cock.

Instead, she took the knife and sliced open the skin of his hand. His fingers curled in reflex, but he said nothing. Circuits popped and crackled as they became exposed.
Okay, definitely not human.

So why the uncomfortable feeling that something about him wasn’t as it appeared? She felt the need to ask again, “Are you Cyborg?”

“That’s not what I asked.” His voice held too much inflection for a standard robot. He was some sort of advanced design she hadn’t come across before. Her brother ran various test facilities for advanced weapons and electronics research, so the possibility existed that he was a product of some secret research project.

She turned and secured the knife in her weapons’ case. She wasn’t in the mood to deal with the bot tonight. After working nineteen hours straight, she wanted rest. “I’m going to shower. Allow no one into my quarters.” Not that anyone would come in without permission, but she felt compelled to issue some sort of order.

She also needed a specific place on-ship for the bot and again contemplated the storage units on the bottom deck. She only really required his presence for off-ship protection, to watch her back. She didn’t want him located inside her quarters. Damn the regulations. “You processed that, right?”

“Yes, Captain. No one will enter.”

She shook her head at the delayed response. Long ago, she’d learned to trust her instincts, but she would shelve her doubts for now. Her brother had sent this bot. Sheera had checked him out. He was completely safe and top-of-the-line, according to them.

Exhaustion and frustration with her current assignment was probably just clouding her reason. She wanted more of a future than ore recovery provided. Each day, she grew wearier of this in-space life.

She couldn’t even remember the last time she’d had any real fun.

Needing to wash off the sweat of the day, she disappeared into the private bath.

Adam let out a sigh of relief. He examined the cut on his palm and started repairs. No major circuits damaged, so the fix was easy. When he heard the shower turn on, he glanced toward the bath. The Ambassador’s sister was smart.

Beautiful, too. Her appearance had taken him by surprise. Porcelain skin, chestnut hair pulled back into a bun, sharp green eyes, and a lush body—not a stick figure like many of the commissioned women he knew.

This assignment turned more interesting by the moment.

Serving the Ambassador on Jenway had become more dangerous the last few months—too many suspicious people on staff and visiting the station each day. The unstable military situation with Jenway’s sister planet added to the problem and kept everyone on edge day and night.

Up here, he could survive. And not end up terminated like other Cyborgs, just because a few went berserk. Well, maybe more than a few.

He was more man than machine anyway. In his opinion, he didn’t deserve to die. And neither did she. He glanced at the bath door again. Tyree’s mission to find and bring back valuable ore attracted every criminal and scavenger in the sector, according to the Ambassador.

Persona - A Disturbing Psychological Thriller by Horn, Marc
0.5 One Wilde Night by Jenn Stark
Donny's Inferno by P. W. Catanese
Vet on the Loose by Gillian Hick
Sharpe's Fortress by Bernard Cornwell
Unethical by Jennifer Blackwood
Anne Neville by Michael Hicks
Skeleton in a Dead Space (A Kelly O'Connell Mystery) by Alter, Judy
Suffragette in the City by Katie MacAlister
The Mouth That Roared by Dallas Green