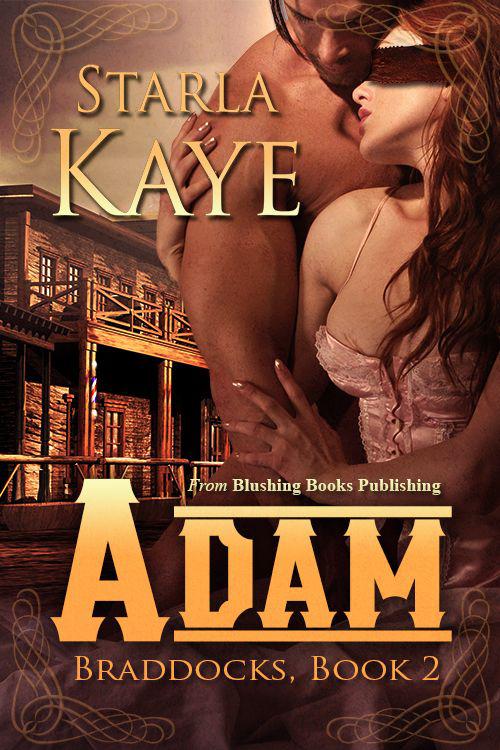 ©2012 by Blushing Books® and Starla Kaye

All rights reserved.  No part of the book may be reproduced or transmitted in any form or by any means, electronic or mechanical, including photocopying, recording, or by any information storage and retrieval system, without permission in writing from the publisher.

The trademark Blushing Books® is registered in the US Patent and Trademark Office.

WOULD YOU LIKE A FREE SPANKING STORY EVERY MONTH?

At
http://www.blushingbooks.com
, we provide our visitors with a free eBook every single month! That's right, every month we choose an eBook to give to our customers at no charge, both to show our gratitude for your business and also to provide a sample of the content we offer.

Can you read this free eBook on your Kindle? Yes! Once you’re logged onto our site, it’s easy to send a book right to your Kindle.

DO YOU NEED A TRIP TO THE WOODSHED?

See the stories first at The Woodshed!

“Live, love, laugh… such simple words, but words I take to heart.  There are never enough hours in my day to do even half of the things I would like to do.  But no matter how crazy my life get, I try to incorporate my words to live by (live, love, laugh) into each day.”

Don’t miss these other exciting stories by Starla Kaye:

All He Wants For Christmas

If You Loved Me

Timing was everything and his was the worst.

Adam froze in the doorway of Henderson’s Mercantile, gaped at the sight of a britches–covered bottom thrust up high as the young helper, Aaron, bent over in front of the glass–fronted counter. The bottom wiggled back and forth and he couldn’t have looked away if he’d wanted to. Which worried him greatly. What the hell was he doing staring at a young man’s backside?

With one final wiggle, a voice called out, “See? I can move around just fine in these pants.” But it wasn’t Aaron who straightened, turned, and tossed a waist–long red braid over a very feminine shoulder in a boy’s white shirt.

Adam was barely aware of Annabelle Henderson and Jennie Braddock standing off to the side of the store. His entire focus centered on Faith Paddington. The mayor’s spoiled, outrageous daughter was always up to some sort of mischief… if she wasn’t harassing him about this or that. Lately she’d left him alone and he’d been pleased. All right, he’d missed her pestering him, but never in his life would he admit that to anyone.

“What are you doing wearing a boy’s britches?” he barked and drew the attention of all the women. “What would your father think?”

That little bit of a nose of hers shot up, her slender shoulders stiffened. “I’m trying them on to see if they’re what I need. Not that anything I do is any of your business.”

“They aren’t what you need. Put your dress back on like a respectable lady.” It wasn’t that he didn’t like the sight of her sweet, perfectly shaped body in the britches and shirt. No, he liked it too much. But he damn well didn’t want another man walking in here and seeing her.  “Now.”

She didn’t move, simply glowered at him. In her agitation, her plump breasts heaved and pushed out the shirt’s front to its limit. He swallowed hard, curled his hands into fists at his sides. Desire raged through him. He’d been far too long without a woman. It was time he made a trip into the nearby Dodge City and found someone to take the edge off his desires.

Jennie, Faith’s good friend and his sister–in–law, stepped toward Faith. “She’s not doing anything wrong. Leave her be.”

He forced his gaze in her direction. “You best not be thinking about wearing such clothes, Jennie Braddock. Daniel would bust your butt good.” As her cheeks turned pink, he shifted his gaze back to Faith. “A lady should dress as a lady.”

Now Annabelle moved beside the other two women. Her lightly lined face pinched tight in disgust… and did he see a hint of pain, too? She pinned him with a hard look. “Adam Braddock, you get on out of here. Go cause a problem somewhere else.”

He blinked at her, puzzled. She’d never been anything but gentle and kind to anyone, as far as he knew. She’d generally gone out of her way to be patient and understanding with him. She worried about him, even when he got surly with people.

“I don’t care why you came in here.” She pulled in a shaky breath, putting a hand over her heart. “I’m doing business with Faith right now.”

“Selling her a pair of boy’s britches,” he gritted out in annoyance. But he was getting concerned, as the older woman’s complexion seemed to grow paler.

He stepped closer. “Are you all right, Annabelle?” Maybe he should go round up Doc Carpenter.

She tipped her chin up just like Faith had done. “I’m perfectly fine.”

Faith inched next to her and looked anxiously at him. “She’s had a few days lately where she’s felt poorly. She needs help around here, especially since Aaron quit to work on your brother’s ranch.”

He’d heard – but forgotten for a second – that the sixteen–year–old boy had decided he wanted to try being a cowboy. Ben had hesitated taking him on because of his protective feelings about Annabelle. She pretty much treated all of the Braddock brothers as the sons she’d never had and they all watched after her as much as they could. So how the devil had he not noticed her feeling poorly? He worked and lived next door to her. Was he so lost in his doldrums that he didn’t see what happened around him anymore?

Irritated with himself, he sounded gruffer than he meant to as he said, “Maybe you should close the store.”

Every one of the women sent him sizzling looks.

“I’ll do no such thing!” Annabelle snapped. She stretched to her full non–intimidating height a good foot shorter than him. “I just need to take it a bit easier for a while.” She nodded at Faith. “Sweet Faith is going to help me out for now.”

Faith looked sourly at him. “I suppose you have an objection to that too. As you do to the britches I plan to wear around here while I work.”

Lord yes! He already saw too much of her as she continually chased after him. At least he had. Until about a month ago. He still hadn’t figured what had brought about the change in her. He’d been too busy congratulating himself on finally being rid of the little nuisance. But to have her working next door to him on an almost daily basis… .

“I can’t imagine that your father will allow it.”

She glanced away, clearly bothered by his comment. Then she faced him again. “I’m not a child anymore. I’m twenty–one and perfectly capable of making my own decisions.”

He noted how Jennie was worrying her lower lip, her pretty face pinched in concern. Even Annabelle appeared uneasy. They all knew the town’s opinionated mayor had a good heart but he also believed in being the strong head of his household. Nothing had ever been said about him applying a firm hand to his wife’s or to Faith’s bottom. Discipline was a private business. But many in town had witnessed one of the women squirming uncomfortably now and then on the church pew on a Sunday morning. Himself included. It didn’t bother him, though. Both Sarah and her daughter Faith could be trials at times.

“What you need is a husband, a household of your own to take care of. Then you wouldn’t have time for…” He closed his mouth at the furious looks cast in his direction.

To his surprise, Faith said calmly, “I have decided to be a spinster. Men are more trouble than they’re worth and I don’t need one in my life.”

Faith shot him a withering look and then moved around the counter, heading for the back room. “No, it’s more than Adam’s determined resistance to my attentions. I’ve been courted numerous times over this last month by some of the cowboys in the area, you know that. But not a one of them truly wanted more than to get in my bloomers.”

She glanced back at Adam, and then continued on her way. “While it might be enjoyable having a man rut into me, I want more than a man’s seed. Since that appears to be all men are interested in…Well, I’ll be content to live alone.”

Adam gaped at her bold declaration, slowly fuming. “She’s been courted? By some of the yahoos around here?”

Annabelle seemed to have recovered now and shook her head sadly at him. “Did you think she would wait forever for you to come to your senses? She’s pretty. She’s sweet. Of course there are men around these parts wanting to court her.”

He didn’t want her constantly trying to whittle away at his resistance. He’d decided after his first wife died giving birth he never wanted to go through all that pain again. Loving someone was nothing but a headache, heartache, too. But, hell, he hated the notion of Faith going out with any of the men around Dry Fork. What was her father thinking allowing that?

Frustrated, he snapped, “Faith Paddington is not sweet. She’s trouble. Too outspoken for her own good. Too daring and independent.” What she needed was a good walloping to get these crazy thoughts out of her head. “A decent woman doesn’t talk about men wanting to get in her bloomers.”

He sucked in a steadying breath, horrified at the idea of any man touching her in that way. “Talking about a man’s seed. She needs her mouth washed out with soap for speaking such things. A hand applied to––”

Faith poked her head back into the room, eyes blazing. “Rutting or spanking. That’s all men seem to think about doing to their women.”

“Some women need their butt burned from time to time.” He refused to talk about the “rutting” because he was already fighting down an erection just at the thought of pounding into her.

Disgusted with all of it, he turned and stomped out of the mercantile.

The Lords of Anavar by Greenfield, Jim
04. Birth of Flux and Anchor by Jack L. Chalker
One Year in Coal Harbor by Polly Horvath
Finding Sophie by Irene N.Watts
North of Montana by April Smith
Encore Edie by Annabel Lyon
S&M III, Vol. II by Vera Roberts
The Day That Saved Us by Mindy Hayes
Broken by Erin M. Leaf
Because You Loved Me by M. William Phelps