Read After the Ending Online 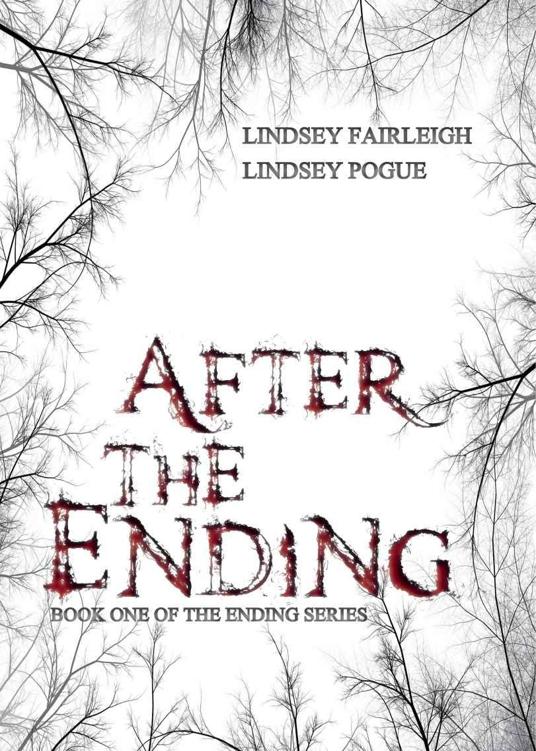 BOOK ONE OF THE
ENDING SERIES

This book is a work
of fiction. All characters, organizations, and events are products of the
authors’ imaginations or are used fictitiously. No reference to any real
person, living or dead, is intended or should be inferred.

For our unbelievably supportive family and friends,

who encouraged us when we announced

our crazy decision to write a book.

For Dennis and Brian,

who give us the space to live in two worlds,

even if one isn’t real.

Looking for
more from the world of the Ending?

“Friendship is unnecessary, like philosophy,
like art…It has no survival value, rather it is one of those things which give
value to survival.”

March 15, 1 AE
(from the journal of Danielle
O’Connor)

I wish I could walk
away now.

Cringing, I glared at the stinging, red paper cut on the tip
of my index finger and muttered, “Damn hand sanitizer.” I’d always been a fan
of good old-fashioned soap and water, and I was irked that my dissertation
advisor had forced the slimy, astringent goop into my hands when I’d left his
office.

Unfortunately, the compulsory germ-killing reminded me of
Callie, my pathetically sick roommate. I’d driven her to the campus clinic
first thing that morning. She’d been sitting on our couch in pajama bottoms and
a purple pea coat, mumbling, “I’m going to the doctor right now…just give me a
second…,” and staring at the floor. I’d immediately hustled her out to the car
and zipped her to the doctor.

“It’s just a bad case of the flu, I’m sure,” the doctor
had claimed, barely perceptible worry tightening her eyes.

Callie’s ashen coloring had been troubling, but not as
much as the doctor’s instruction to take her to the hospital if her condition
worsened…like the other sick students…dozens of them. I couldn’t believe a flu
outbreak was forcing so many healthy people into the hospital. It wasn’t like
we lived in a third world country or something.

The handful of students missing from my morning study
group only intensified my concern—a handful is a lot when there are only eleven
students to begin with. As I cleared the last crosswalk on the way back home,
being careful to avoid the puddles left by the morning rain, I wondered if the
outbreak would end up being as deadly as the Spanish flu was nearly a century
ago.

I shook my head, dispelling my unusually grim thoughts.
It’s
just the flu
, I told myself for the hundredth time.
She’ll be fine. They
all will
.

As I entered my turn-of-the-century brick apartment
building, I distracted myself with thoughts of how incongruous the classy
exterior was with the 1980s-remodeled interior. The décor was tragic—pastel and
gold foil abstract art hung on the walls, and the carpet was a tacky
combination of mauve, coral pink, and faded turquoise…and that was just the
beginning. The apartments themselves included worn blue carpet—no doubt
covering handsome hardwood—stained linoleum, and appliances with chipped
plastic.
Such a waste…this place could be exquisite. But, at least the
rent’s low…

I walked to my ground floor apartment, unlocked the door,
and shifted my computer bag to brace myself for the impending “happy Jack
attack.” Except when I opened the door, it didn’t come.

“Jack?” I called out, curious.

“Hey, Sweet Boy,” I said, crouching down to scratch his
shoulders and to let him sniffle my neck. “She probably just wants to sleep.
Want a
treat?
”

Jack wagged his way into the kitchen while I quickly
peeked into my roommate’s bedroom. Inside, Callie snored softly as she slept.
She’s
fine.

After rewarding Jack’s amazing abilities to sit (“sit”),
shake hands (“nice to meet you”), and play dead (“bang”), I plopped down on my
bed and opened my laptop. Jack hopped up and settled in next to me, causing a
bed-quake.

Cam, my adorable boyfriend, wouldn’t get home from work
for another half hour. Rubbing Jack’s velvety ear, I decided to write a nice
long email to my best friend, Zoe—she hadn’t answered when I’d called during my
walk home nor had she responded to my texts. The woman worked like crazy, and
we hadn’t chatted in days. Besides, writing to her would kill time
and
help me avoid doing anything productive on my birthday.
Genius
.

Zo! I can’t believe we’re apart on a birthday. It’s
practically heretical! Thank you SO much for the amazing drawing...it’s totally
perfect. I can’t believe how many details you remembered from that night. Cam
was super impressed too.

Anyway, how was your date with Mr. 58 (or was it Mr. 85)?
You promised to give me juicy details, but alas, I’ve heard nothing from my
wayward Zo. It was the blonde guy, right? Or was that the last one?
Gah
…I can’t keep up. Give me an
ooey
-gooey,
nitty-gritty description of EVERYTHING. Please.

On a totally different note, the flu is getting pretty bad
over here. Is it bad in Salem too? This morning I took Callie to the doctor,
and Zo, I’m really worried about her. She’s so pale and weak—a soft gust of
wind might send her tumbling. Actually, she looks just like you did when you
had that H1N1 virus a few years ago. The doctor told us she’s seen dozens of
cases of this flu virus over the past week. Looks like another little outbreak.
Cam’s been making soup for Callie…he’s so sweet. Besides, his cooking is a
gazillion times better than whatever I’d conjure up. My food might make her
feel worse…

So…I’m sure you want to know about tonight’s birthday plans.
Cam (sigh, drool) is taking me to his restaurant and then to that Irish pub—you
know, the one where you had too many Long Islands and danced on the table...
Anyway, Cam said he invited “everyone we know” to the pub. But, considering
that over half of Seattle seems to be sick, I’m guessing less than a dozen
people will show. Whatever…I’m just excited to get out and have some fun.

Oh…gotta go...Cam just got home and is harping on me to get
changed for dinner. I guess soggy jeans aren’t classy enough. I’ll give you a
recap of the birthday night tomorrow, assuming I’m not too hungover to open my
eyes.

We’d been at the pub for several hours when Jamie’s pink,
designer stiletto jabbed my shin. “Did you hear about that student who
died
today?”
she asked.

My food and alcohol-induced semi coma receded
momentarily, allowing me to process her eager words. Always the drama queen,
that Jamie. She never knew when to keep her mouth shut, so we constantly butted
heads.

Sighing, I grumbled, “What are you talking about?” The
question was a concession I hated but needed to make. I
had
to know; it
was too juicy to pass up.

Not for the first time that night, I mentally cursed Cam
for inviting her. “Evidently not,” I replied dryly.

“Yeah.” Her chest heaved with delight as she explained,
“some undergrad died of the
flu
. You know, the one that
everyone
has right now. You do at least know about
that
, right? So now people are
dying from it. Doesn’t Callie have it too?”

Hateful bitch,
I thought viciously. I’d never
really liked Jamie, and my concern about Callie clouded my judgment, along with
the three vodka tonics and the glass of Champagne. “You’re a hateful bitch,” I
retorted.

The statement earned shocked stares from several of the
young Seattleites sitting around the corner booth, including Cam. But I wasn’t
done. For days I’d been worrying about Callie, and stupid Jamie had just
implied the worst.
She’ll be okay. It’s just the flu.

With a sickly sweet smile I cooed, “Callie’s doing much
better, thanks for asking. But
you
, Jamie…you’re looking quite pale. Are
you
sick? Or, have you just had too much to drink? You
do
at
least know about your reputation as a lush, right?”

A growing silence encompassed our table. As I opened my
mouth to continue, Cam interceded. “Let’s get a drink, D,” he said through
gritted teeth.

I was quickly ushered out of the booth by his firm grasp.
His unusual forcefulness was more than a small turn on, and suddenly, I was
really looking forward to returning home with him.

By the time Cam and I left the pub, the confrontation
with Jamie was nearly forgotten. We entered our apartment, eager to reach our
bedroom, and noticed that Callie’s bathroom light was on. When I went to turn it
off, much to my shock, I found my roommate curled up on the tile floor. The air
was thick with the rank smell of vomit.
Oh my God…

I fell to my knees beside Callie and turned her onto her
back. She was burning hot and coated in sweat. Jack, curled up next to her,
kept nuzzling her cheek and watching her face for a response. There was none.

While we’d been out eating, drinking, and being generally
merry, Callie had vomited what looked like all of her insides into the toilet.
I stared at my friend’s non-responsive form, unable to move for several long
seconds. And then I started panicking.

“Callie! Callie, wake up!” I implored, nudging her
gently. She didn’t respond. I shook her harder, watching her sway like a rag
doll. She looked so pale, so young. “Cam! We have to take her to the hospital!”
I screeched. When I looked behind me for Cam’s unfailing support, I found him
on the phone. He was repeating our address.
Oh…9-1-1…I should’ve thought of
that.

“Thanks,” he said, ending the call. “They’ll be here in
fifteen or twenty minutes,” he told me.

“I know, D, but they said it’s an unusually busy night,”
Cam said, filling two glasses with water from the kitchen tap. “They’ll get
here as fast as they can.”

When the paramedics finally arrived, Cam had to pry me
from my prostrate position beside my unconscious friend to give the emergency
crew enough room to help her. We followed the ambulance to the hospital and
watched as Callie was rushed through the emergency room and into a restricted
area.
FAMILY ONLY
, read the sign taped to the door. All we could do was
sit…wait.

As I looked around, my mind returned to a mostly-sober
state. I wasn’t in an emergency room waiting area but a stifling, body-packed
cage. People crowded in on all sides, milling, mumbling, mourning. They all
looked sick. Hundreds of them.
Shouldn’t the hospital be taking care of
these people? What if they infect me? Infect us?

Cam sat beside me, holding my hand. He looked just as ill
as everyone else in the crowded room.
What if he
is
sick? Like
Callie…oh God…like the guy who died…

Hours passed, and then I saw her. I recognized the silky
blonde hair and pink stilettos. Jamie.
You’re a hateful bitch,
my words
replayed in my head.

I watched as they wheeled her through the stuffy room,
unconscious. Just like Callie. I’d been honest in my earlier assessment of her;
she really had looked ill.
You’re a hateful bitch.

Jamie disappeared through the same metal doors as Callie
had. FAMILY ONLY. Medical staff and unconscious patients were the only people
who’d passed through them. So far, only the medical staff had returned.

Desperately, I looked at Cam, hoping he could somehow
give me the air my lungs couldn’t seem to capture. But he appeared ready to
pass out, completely unaware of my emotional flailing.
Zoe
, I thought,
I
need you!

Callie’s in the ER. She’s in a coma. Cam and I came in with
her a little after 2AM. Been here for hours, but the docs still haven’t told us
anything. Worst birthday ever. Wish you were here.

BTW, I’ll call Grams in a bit to check on everyone back
home. How are YOU feeling? Me? I’m freaking out…