Read After The Storm Online 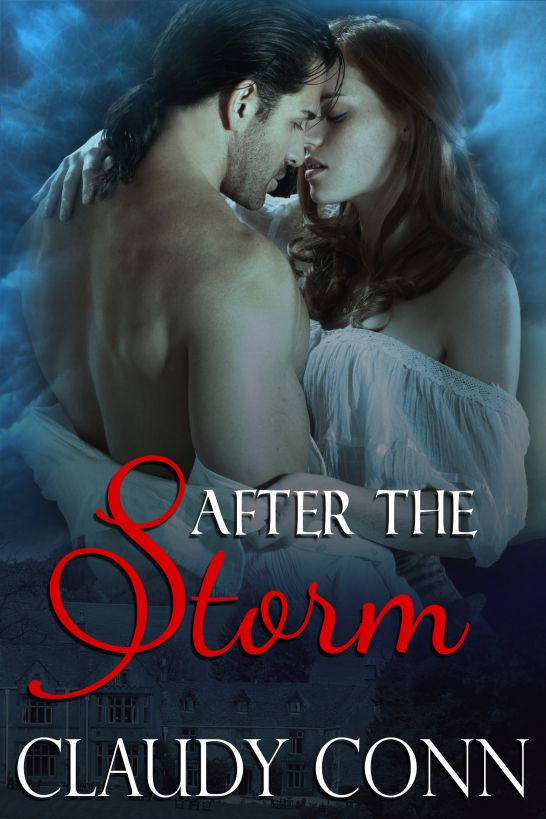 She should have been afraid but was too
astonished …

What reviewers are saying about Claudy’s
books

She
should have been afraid but was too astonished …

A pair of startlingly blue eyes glared angrily down
into her own, and the voice said in a tone that made her open her
eyes wide, “Well, well, at least it’s a pretty wench that’s
detained me.”

He sounded as though he were some huge giant about to
eat her, and without another word, and before she realized what he
was doing, that was what he did.

Jenny found herself being ruthlessly kissed! In that
moment, with this stranger’s lips on hers, she was almost too
shocked to react, but she was just a bit aware of a tingling
sensation that journeyed through her body.

At length her mind returned to her and she made an
effort to resist by putting her hands to his chest and pushing
hard. This, however, did not budge him. He seemed to hold her in a
vice-like grip. She should have been afraid but was too astonished
to consider that.

She was, however, furious at his daring, and when he
put his head back to look at her and laugh, she felt something of
her old self return. The old, vibrant Jenny would never stand for
such treatment!

As he got into position, obviously meaning to kiss
her again, she reacted and, feeling both outrage and anger,
formulated a quick plan.

She immediately relaxed in his arms and allowed the
scoundrel to believe he had conquered her. As she expected, his
grip eased up.

Jenny had just enough time to bring her booted foot
into position and then thrust it hard and forcefully into his
shin.

She felt a great deal of satisfaction as he cried out
in pain and paused only briefly to wag her finger and tell him,
“Fie, sir—fie!” Then she ran. She held her skirts in hand and put
the road behind her as fast as she could, only stopping when she
sighted the green lawns of her home, Ashley Grange.

Once on her own estate, she leaned up against a tree
and, breathing hard, hurriedly glanced behind her. Thanking
providence her assailant had not deemed it worth his trouble to
pursue, she sucked in a long, delicious breath of air and then
proceeded to the house. Oddly enough, her anger abated and just a
touch of amusement tickled her senses as she thought of the way
he’d reached for his injured leg. Ha, served him right.

Prince in the Mist (Novella)

What reviewers are saying
about Claudy’s books

ShadowLove—Stalkers
is filled with steaming
action and dramatic tension … Claudy delicately plants the seeds
for future development and characters without distracting from the
excitement and romance of Stalkers. The result is that she has a
paranormal, vampire series, of romance novels, which carries her
own unique and spicy aroma.

ShadowLove—Stalkers
is hot, Hot, HOT … and
yes, I am blushing.

ShadowLove—Stalkers
is a story that
immediately hooks the reader. It reminds me of a roller coaster
just beginning, only to plunge into speed, drawing the reader into
non-stop action. Intense and spellbinding, this paranormal romance
kept this reader engrossed until the conclusion. I loved the
passion and chemistry between the main characters. With tremendous
action and well thought out characters, this fantastic read sizzles
and sparks like a firecracker.

Trapped Legend has my pulse skyrocketing!

A clever, fast paced, unpredictable blend of action,
adventure, mystery, magic and steamy hot loving … I picked it
up and couldn’t tear myself away from it until I read the last
page.

I highly recommend each book in Claudy’s Legend
series. You’re seriously missing out on some wonderful adventures
if you haven’t read the previous stories. It’s by far one of the
most exceptionally crafted, enchanting Fae series I’ve ever
read.

This second in Conn’s Shadow series is filled with
vampires, a vampire slayer, demons, wizards, a Fae prince and an
unlikely romance. Claudy Conn does an excellent job of making this
a standalone story while incorporating some of the characters from
the first book and introducing us to several new characters. The
war is still brewing and now the fae are becoming involved. Can’t
wait for the next book in the series.

This is another one I couldn’t put down and read in
a single sitting. I got so caught up in the action I was sad to see
it end. Fans of the paranormal romance, urban fantasy and vampire
genres should enjoy this as well.

~ Wild About Bones
on GoodReads

One hot and thrilling book

I fell for all three of the main characters, fun
loving Maxie, dark and brooding Julian, and one hot Fae, Breslyn.
However, it wasn’t just the characters that kept me on the edge of
my seat, it was the entire involved plot that included jealously,
betrayal, magic, murder, and, of course, hot passion … The
well-written out mixture of myth and legend, not to mention the
characters, all in today’s world has me Joyfully Recommending
Spellbound—Legend
as one book you won’t want to miss.

Fanning the flames of Myriah Fire!

What was once an innocent, if rollicking, regency
romance has exploded with passion as Claudy Conn revisits Myriah
Fire to turn up the heat.

The addition of unbridled sexual passion to Myriah
Fire’s strong story brings dimensions of maturity and depth to the
struggles faced by Myriah and Kit, without diminishing any of the
innocence, joy or charm found in the original story. This revised
version of Myriah Fire allows Claudy’s regency followers to
appreciate what her paranormal romance fans have
discovered—mind-bending eroticism.

A truly captivating tale with a blast of added
sizzle, Myriah Fire will kindle the flames of your heart and burn
up the night.

It’s a brilliant, fast-paced, and ‘true to its
title’, ‘going to catch you on fire’ romance. Looking forward to
more! Hoping Claudy Conn plans to share more of her historical
treasures with us.

Myriah has always been my favorite

This is a sweet, funny, charming romance. The
characters are likeable and the story is well told. I loved all of
the Claudette Williams (now Claudy Conn) books, but this one has
always been my favorite. I hope she will put out more of her
backlist.

5 Stars for
Rogues, Rakes,
and Jewels
!

Being a huge fan of Jane Austen, with
Emma
and
Pride and Prejudice
being two of my favorite romance
novels, I was thrilled when Claudy sent me her regency romance to
review. This novel had everything: danger, a villain, twists, and
more secrets between characters then I could count. I really
enjoyed the story and the strong female lead. One thing that I will
say about Conn’s Regency romance is this is no Jane Austen. There
was serious heat in the book between the main characters. That just
made this an even better Regency piece. I recommend it for a fun
and delightful read. I will look to read her other Regency romances
now.

Another fun regency by Claudy Conn. Full of
characters who come to life and pull you into the story. And as
always the evil villain lurking about ready for his chance to wreak
havoc. From the forests of Nottingham to the streets of London,
there is plenty of excitement and page-turning adventure from
beginning to end.

This ebook is licensed for your personal enjoyment
only. This ebook may not be re-sold or given away to other people.
If you would like to share this book with another person, please
purchase an additional copy for each recipient. If you’re reading
this book and did not purchase it, or it was not purchased for your
use only, then please return to Smashwords.com and purchase your
own copy. Thank you for respecting the hard work of this
author.

Names, characters, and events depicted in this book
are products of the author’s imagination or are used fictitiously.
Any resemblance to actual events, places, organizations, or
persons, living or dead, is entirely coincidental and beyond the
intent of the author.

No part of this book may be reproduced or
transmitted in any form or by any means, electronic or mechanical,
including photocopying, recording, or by any information storage
and retrieval system, without permission in writing from the
author.

Discover this and other titles by Claudy Conn at
Smashwords.com: