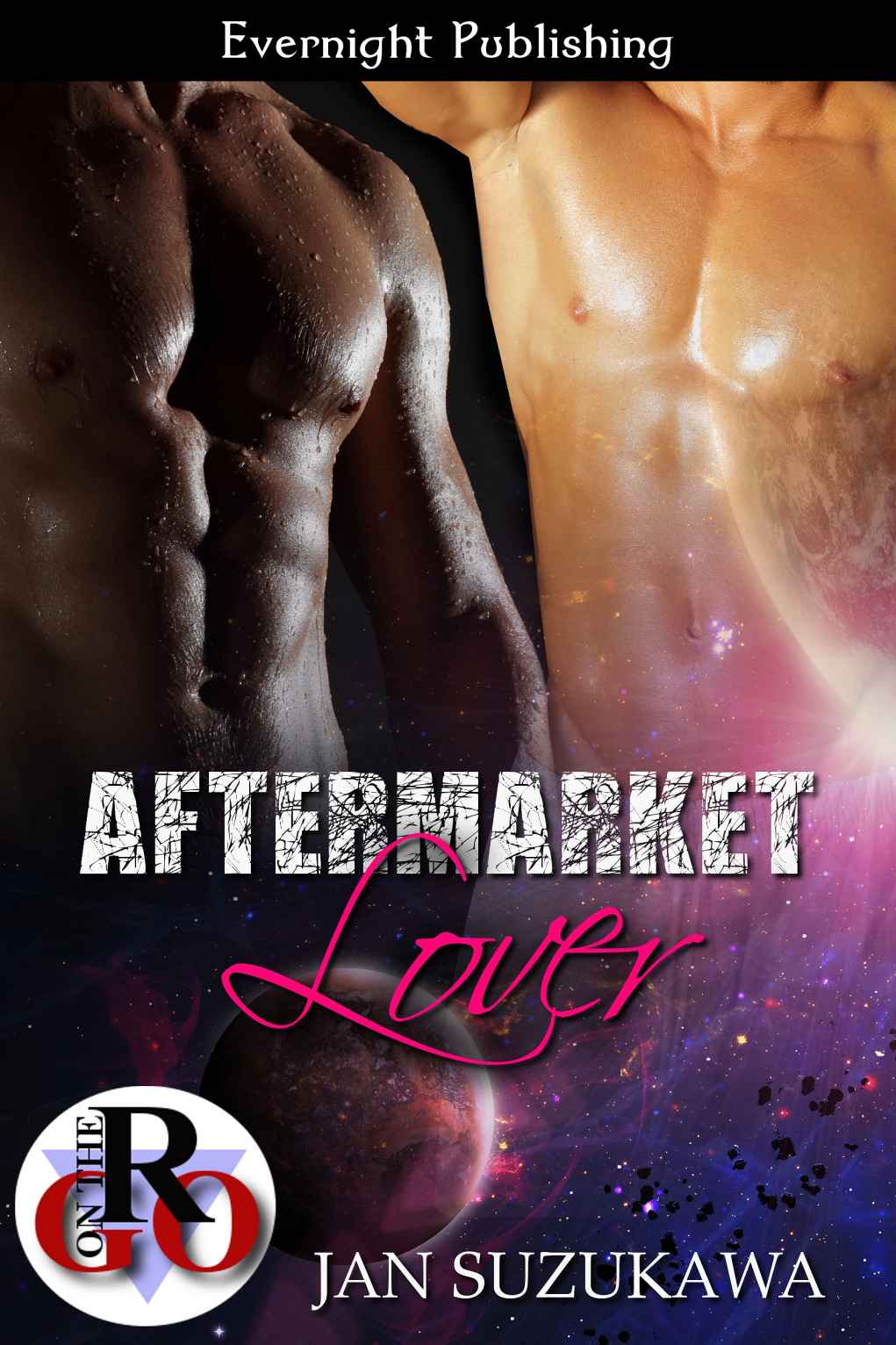 He
sighed, gazing up at the pale violet skies of Planet X2-4 and smoothing back his short black hair.

Mining precious metals on the outer rim of the
Milky Way galaxy had its advantages. Better than decent pay for one thing, and the freedom to live as you chose to, much of the time.

On the other hand—being the only human on a planet
could get a little lonely.

Ash
shut off the analyzer machine and lifted it into the land skiff. He could check off this area: there was nothing here.

His
brown eyes scanned the light-green flatlands and dark purple hills in the distance. The hills registered as a possible, so he would try there next.

The skiff
flew over the short grasses as Ash reset the machine, cool winds ruffling his workman’s jacket. Earth’s constant need for precious metals, especially gold, meant an odd-jobs man like him could earn enough to buy a used spaceship after a few years working a dreary job like this one. His company had the contract on this sector of this particular solar system and Ash was their only employee on the planet.

Once gold was spotted by the
analyzer machine, Ash used the automatic mining machines to dig it out. It wasn’t difficult, but he would work long hours for days once the process began.

His commissions on top of his salary made the difference. If he found enough gold in the
remaining areas of the planet as he’d already found so far, he’d have enough to buy that ship and start traveling the stars.

He
was in his late twenties now, and had saved diligently for the past two years. A few more months and he’d be there.

Ash
could almost taste it.

A beep on his U
-tab: it was Jake. Jake delivered his supplies once a week and served as his connection to the rest of the universe, bringing him gossip and tidbits that Ash couldn’t get on the U-net.

The message was
intriguing:
Bringing the usual plus something extra. Prepare yourself for a good time.

Ash
frowned, but couldn’t keep a little quirk from lifting the corner of his mouth. A good time? Not with Jake, who Ash knew was straight while he was gay.

Let’s see if you and I have the same concept of what a good time
is, he smirked to himself.

In the late afternoon he ambled out of the station that served as his home, with Tiny barking in excitement at his heels as he always did when Jake arrived.

The small
silver ship settled into the rust-colored dirt and the ramp unfolded to the ground. In the next minute Jake was coming down the ramp in that rangy way of his, hands in the pockets of his deliveryman’s jumpsuit. “Yo.”

“Yo,”
Ash said agreeably. “So where’s my surprise?”

“
Inside the ship.” Jake wasn’t even trying to hide the salacious smile on his face. “Let’s get the supplies in first.”

“Oh, this is something else for sure,”
Jake grinned, loading the last box into Ash’s storage room. “I’ll go and get him.”

Him?
Ash stared after Jake as he went outside.

Tiny
panted and barked, looking up at Ash happily. The white and tan terrier mix always got that look on his face when something good was coming.

Ash
’s curiosity got the better of him and he went to stand at the bottom of the ramp with growing expectation. The delivery pilot had procured some useful and interesting novelties for him in the past two years. Maybe this would be something fun.

He never could have
anticipated what he saw next.

A silver-haired young man appeared in the ship’s hatch
and looked down at Ash with a tentative smile on his face. “Hello.”

Ash
stared open-mouthed as he walked down the ramp. A man? Jake brought him a man? Was he a hustler?

The young man had startling light blue eyes set in a gentle face. His skin was smooth and pale.

Ash
blinked as the young man held out his hand, and he shook it automatically. “My name is V-Lin. I’m very pleased to meet you.”

“
Ash.” Tiny began barking at their feet, staring at the new person and trying to jump up his leg. “And this is Tiny.”

“
Tiny,” V-Lin said, crouching down. He petted Tiny’s head and the dog licked his hand. “And Ash,” V-Lin said, looking up at Ash with that hopeful smile again.

Jake
walked up and Ash turned to him. “Can we talk?”

Tiny
scampered into the station and V-Lin followed him inside. Ash touched Jake’s arm and moved them closer to the ship so as not to be overheard. “He’s a robot?”

“Guess the silver hair’s a giveaway, isn’t
it? Yeah. He’s an SDS model.”

Ash
could feel his face flush. “You mean—”

“Sex and domestic services,”
Jake said. “I mean, you don’t have much use for a farming robot out here do you?”

“Listen, just try him out. If he doesn’t work for you, I’ll pick him up next week.”

“I can’t afford a robot, not even to rent,” Ash said. “You think I’d be doing this for a living if I could?” He was amazed Jake would even think he had the money for this.

“Well, let’s just say this model has a few… issues,”
Jake conceded. “Anyway, I’ve got to get going. See you next week!”

He
sprinted up the ramp, leaving Ash spluttering. As the ramp pulled up, Jake waved cheerily. “Hope he puts a smile on that grumpy face of yours.”

Ash
watched Jake’s ship lift off in disbelief. Was he serious? On the other hand—

Had he just been given a free trial with a sex robot?

He walked into the station, his heart beating fast. His mouth felt a little dry. As he shut the door behind him, V-Lin came into the front entry from the kitchen.

“I’ve put
Tiny’s food in his dish,” V-Lin said. He was neatly dressed in a white shirt and dark trousers. Ash had only seen robots from afar. Aside from the uniform silver hair, their facial features and bodies were as unique as humans’ were.

This
one was Caucasian and slender. Ash froze as V-Lin slowly approached him.

Ash
stared, unable to look away as a hand touched his cheek. The robot was shorter than he was; the top of his head came to his chin.

He started as
V-Lin’s other hand found his cock. V-Lin caressed it through his clothes and Ash felt it grow and harden. “Would you like me to suck you off? I really want to do it.”

V-
Lin sank down to his knees and undid Ash’s fly. His warm mouth was on his tool in the next moment and Ash bit back a cry.

How long had it been? He didn’t want to think about it. Fortunately all thoughts left his head as the robot nursed his erection to its full length, covering the head with his mouth and playing his tongue around the tip.

The robot added his hand, stroking Ash’s cock in his fist as he continued to suck the top few inches. Ash breathed, bracing himself with his hands behind him splayed against the door, trying not to push his hips forward and choke the robot.

It was over
too quickly. Ash gritted his teeth, grunted, then cried out, throwing his head back. V-Lin finished him, swallowing it all to the last spasming spurt, then licking him clean.

Ash
rested his head back against the door and stared up at the ceiling. So this was a sex robot. V-Lin had felt as normal and human as anybody.

V-
Lin zipped Ash’s fly shut and stood up. Ash looked at him. Now what?

Tiny
barked, drawing their attention. The small dog stood in the kitchen doorway, wagging his tail.

The smaller man
smiled brightly. “I’ll fix us some dinner,” he said, and turned and went into the kitchen.

Not only could he suck cock like no one else Ash had ever been with, but V-Lin could cook too.

He
sat at the counter and eyed V-Lin as he ate his food. Tiny was already in love with him, dancing around V-Lin as he cooked and settling into a sitting position at his feet.

V-
Lin even made dessert, which Ash never bothered to do for himself, a rich cooked pudding using spare ingredients Ash had in his pantry. “You’re very good at this,” he told V-Lin, and V-Lin looked at him with surprise. “Thank you,” he said finally, in a pleased tone.

Ash
lifted his mug and drank his coffee, wondering at the robot’s reaction. One would think he’d never heard praise before.

Tiny
came padding over to Ash and gazed up at him, tail bobbing back and forth. “Oh,” Ash said. “He needs his walk.”

“Don’t worry about me,”
V-Lin said, that smile on his face again. As he spoke, he was already doing the dishes. “I will be fine here.”