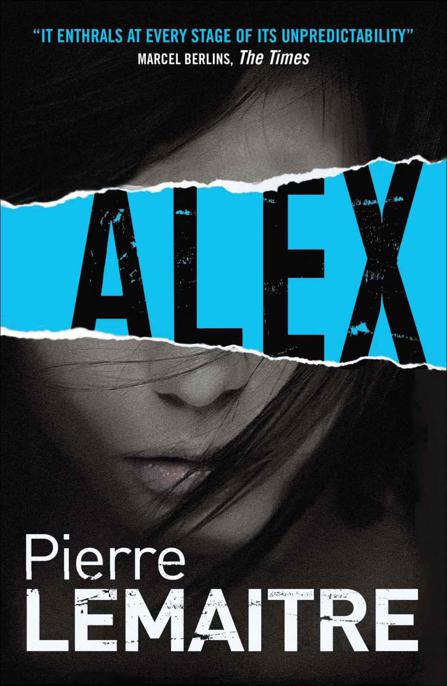 The moral right of Pierre Lemaitre to be identified as the author of this work has been asserted in accordance with the Copyright, Designs and Patents Act, 1988.

Frank Wynne asserts his moral right to be identified as the translator of the work.

You can find this and many other great books at:
www.quercusbooks.co.uk
www.maclehosepress.com

To Gérald for our friendship

The judicial system in France is fundamentally different to that in the United Kingdom and the U.S.A. Rather than the adversarial system, where police investigate and the role of the courts is to act as an impartial referee between prosecution and defence, in the French inquisitorial system the judiciary work with the police on the investigation, appointing an independent
juge d’instruction
entitled to question witnesses, interrogate suspects, and manage all aspects of the police investigation. If there is sufficient evidence, the case is referred to the
procureur
, the public prosecutor who decides whether to bring charges. The
juge d’instruction
plays no role in the eventual trial and is prohibited from adjudicating future cases involving the same defendant.

The French have two national police forces: the
police nationale
(formerly called the
sûreté
), a civilian police force with jurisdiction in cities and large urban areas, and the
gendarmerie nationale
, a branch of the French Armed Forces, responsible both for public safety and for policing towns with populations of fewer than 20,000. Since the
gendarmerie
rarely has the resources to conduct complex investigations, the
police nationale
maintains regional criminal investigations services (
police judiciaire
) analogous to the British C.I.D., and also oversees armed response units (
R.A.I.D.
).

Brigade criminelle
– equivalent to the Murder/Homicide and Serious Crime Squad, handling murders, kidnappings and assassinations and reporting to the
police judiciaire
, equivalent of the British C.I.D.

Procureur
– similar to a Crown Prosecutor in the U.K., addressed as
magistrat
as one might say “sir”, or “your honour”

Juge d’instruction
– the “investigating judge” has a role somewhat similar to that of an American District Attorney, addressed as
monsieur le juge

Alex is in seventh heaven. She has been trying on wigs and hair extensions for more than an hour now, hesitating, leaving, coming back, trying them on again. She could spend all afternoon here.

She stumbled on this little shop on the boulevard de Strasbourg by pure chance three or four years ago. She wasn’t really looking, but out of curiosity she went inside and was so astonished seeing herself as a redhead, seeing herself completely transformed, that she bought the wig on the spot.

Alex can wear pretty much anything because she is truly stunning. It wasn’t always that way; it happened in her teens. Before that she had been a scrawny, rather ugly little girl. But when she finally blossomed it was like a tidal wave, like a computer morphing programme on fast forward; in a few short months Alex became a devastating young woman. Perhaps because by then everyone – particularly Alex – had given up hope that she would ever be beautiful, she has never really thought of herself as beautiful. Even now.

For example, it had never occurred to her that she could wear a red wig. It had been a revelation. She couldn’t believe how different she looked. Wigs seemed so superficial and yet the moment she first put one on, she felt her whole life had changed.

In the end she hardly ever wore it, that first wig. As soon as she got it home she realised that it looked tawdry, cheap. She tossed it. Not into the bin, but into the bottom drawer of her dresser. Every now and again she would take it out, try it on, gaze at herself in the mirror. Though it was indeed hideous, the sort of thing that screamed “tacky nylon fright-wig”, what Alex saw when she looked in the mirror kindled a hope in which she wanted to believe. And so she went back to the shop on the boulevard de Strasbourg and lingered over elegant, high-quality wigs that were a little beyond the means of an agency nurse. But they looked astonishingly real. And she took the plunge.

At first it wasn’t easy; it still isn’t, it takes nerve. For a shy, insecure girl like Alex, just getting up the nerve could take half a day. Putting on the right make-up, finding the perfect outfit, the matching shoes and handbag (well, rummaging through the wardrobe to find something that might match, since she can’t afford to buy a new outfit every time …) But then comes the moment when you step out into the street and you’re someone else. Not entirely, but almost. And though it’s hardly earth-shattering, it passes the time, especially when you’re not expecting much from life.

Alex prefers wigs that make a statement, wigs that say,
I know what you’re thinking
, or
I’m not just a pretty face, I’m a maths genius too
. The wig she’s wearing today says,
You won’t find me on Facebook
.

As she picks up a wig called “Urban Shock” she glances out through the shop window and she sees the man. He is standing on the far side of the street pretending to be waiting for someone or something. This is the third time in two hours she has seen
him. He is following her. She now realises that he must be. Her first thought is “Why me?”, as though she could understand why a man might follow any other girl, but not her. As though she didn’t forever have men looking at her, on the bus, in the street. In shops. Alex attracts attention from men of all ages. It’s one of the benefits of being thirty. And yet every time it happens, she feels surprised. “There are much prettier girls out there than me.” Alex is chronically insecure, crippled by self-doubt. She has been since she was a child. Until her teens she had a terrible stammer. Even now she stammers when she’s nervous.

She doesn’t recognise the man; she has never seen him before – with a body like that, she would remember. What’s more, it seems strange, a guy of fifty following a girl of thirty … It’s not that she’s ageist – far from it – she’s just surprised.

Alex looks down at the wigs, pretends to hesitate, then wanders over to the other side of the shop from where she has a good view of the street. From the cut of his clothes you can tell he was once an athlete of some sort, a heavyweight. Stroking a platinum blonde wig, she tries to work out when she first noticed him. She remembers seeing him in the
métro
; their eyes met for a moment – though long enough for her to notice the smile intended for her, a smile clearly meant to be warm and winning. What troubles her about him is the obsessiveness in his eyes. And his lips, so thin as to be almost non-existent. She felt instinctively suspicious, as though somehow all thin-lipped people are hiding something, some unspeakable secret, some terrible vice. And his high, domed forehead. Unfortunately, she didn’t really have time to study his eyes. The eyes never lie, Alex believes, and it is by their eyes that she judges people. Obviously, in the
métro
, with a guy like that, she hadn’t wanted to linger.

Discreetly, almost imperceptibly, she turned so that her back was to him, rummaging in her bag for her iPod. She put on “Nobody’s Child”, and as she did she wondered if she hadn’t seen him hanging around outside her building the day before, maybe two days ago. It’s vague, she can’t be sure; the memory might be clearer if she turned to look again, but she doesn’t want to lead him on. What she does know is that two hours after seeing him in the
métro
, she spotted him as she turned again onto the boulevard de Strasbourg. On a whim she had decided to go back to the shop and try on the mid-length auburn wig with the fringe and as she turned round, she spotted him a little way away, saw him stop dead and pretend to look at something in the window … of a women’s dress shop. It was pointless for him to pretend …