Alexa - Legionnaire : Training an Assassin: Prequel to Alexa - The Series 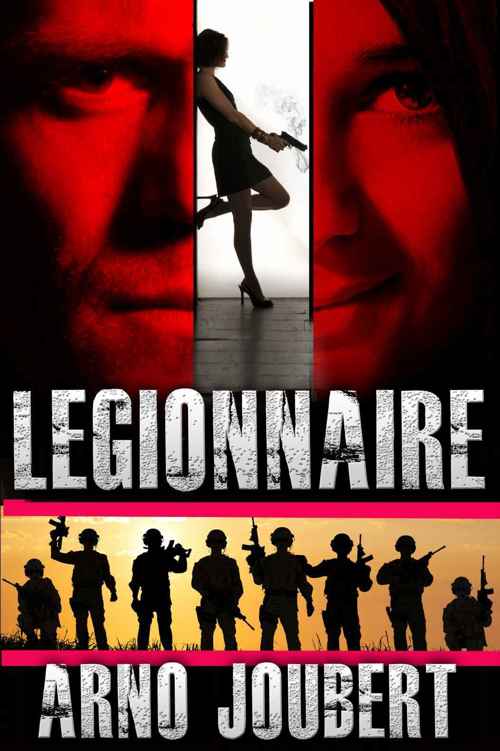 Sarah dashed downstairs to answer the door. She wasn’t expecting Zachary back for another half an hour. She put her eye to the peephole. A tall, brawny man with slick black hair tied back in a ponytail stood, hands behind his back. He wore a dark suit, a tie, and Ray-Bans. Official looking. She tucked a tuft of hair behind her ear and opened the door.

The man removed his glasses and folded them into his breast pocket. “Sarah Cohen?”

Before Sarah could react, he slammed his fist into her face. He grabbed her arm before she hit the ground then lifted her and carried her into the house. Blood streamed from her nose, and the man cursed when some of it dripped onto his shoe. He dumped her on the couch and fetched a paper towel from the kitchen, then cleaned the blood spatters in the entrance hall. He went back and fetched a bag of frozen peas from the freezer and dropped it on a side table next to Sarah.

She sat up unsteadily. The man was busy in the kitchen, cutlery clinking and the kettle boiling.

“Don’t move, Sarah,” he called from the kitchen. “Put the bag on your face, your nose is broken.” The man sauntered out of the kitchen, a steaming cup in his hand, and popped a toothpick in his mouth. “You’re going to have black eyes; use the bag. I hate ugly bitches.”

“Who are you?” Sarah sobbed, taking the makeshift ice pack and tenderly placing it on the side of her face. “What do you want?”

He chuckled, pointing his thumb at his chest. “Me? My name is Miguel Perreira.” He rolled the toothpick in his mouth, smirking at Sarah. “What I want?” He gave a small shrug. “To kill your husband. He cost me lots of money. He tried to kill my partner. My partner wants, how do you say . . .” Perreira rolled the toothpick in his mouth, examining his nails. He looked up and said with a crooked smile, “. . . revenge.” He spoke with a Spanish accent. “You know why he tried to kill my partner?”

Sarah stared at the intruder, a cushion clutched to her chest. “What are you talking about? Zach is a computer programmer. He works for IBM. You’re insane, mister.”

The tall man tsk-tsked. “Ah, you’ve been told lies too, I see. Your man Zachary, he is good at keeping secrets.” He grinned, flashing a gold-capped tooth. “But not from me, you will see,” he said, wagging a finger. Miguel Perreira glanced at his watch. “Your little man should be here in thirty-five minutes. Tonight is your dinner date, no?”

She swallowed then nodded.

He drained the cup and placed it on the table. “Your pretty baby
hijita
is visiting grandmama tonight. Now is the time for your shower, to put on the tight black dress.”

He casually leaned against the wall, examining his nails as he spoke. “You know you are taller than your little man when you wear your Prada shoes? It does not bother him, no?” he asked, sucking his teeth. He continued without waiting for an answer. “I phoned the restaurant, Pastel. Told them you are not coming no more. No one will miss you tonight.” He spoke casually, not once looking up. “So it seems there is one thing for you to do now.”

“What?” she asked, cringing into the chair.

“Get off your clothes.”

“Why?” she asked, her arms clutching the cushion. “What are you going to do to me?”

Perreira glanced her way then chuckled. “Why? You need to be ready for the little man. I like the black G-string you always wear; I think maybe the little man likes the red one, no?” He grinned and sauntered towards her. “Maybe you will get lucky tonight.”

“Please, sir. Just leave us alone. We have nothing to do with—”

Perreira hit her across the face with the back of his hand. “Get your clothes
off
, bitch!” he roared, spittle flying from his lower lip.

She slumped to the ground, whimpering, holding her cheek.

He strode towards her. “Do Jewish bitches not listen to their men anymore? Get up and take the clothes off,” he shouted, grabbed her arm and propped her against the wall.

Sarah Cohen stared at Perreira, her shoulders shaking with suppressed sobs. Then she unbuttoned her blouse.

Zachary Cohen drummed his steering wheel to the beat of Phil Collin’s “In the Air Tonight.” He took the turn to his home off Ben Gurion Road and rolled down the car window. This particular autumn evening was a balmy one, but the damp ocean breeze cooled him down. Dark storm clouds were forming in the distance; he made a mental note to remember the umbrella. He was looking forward to tonight.

Thursday date nights had become a tradition in the Cohen household, his father having started it. Zachary had never understood why the man was always chirpy on Thursdays, why his mom used to skip around the house with a twinkle in her eye. Now he did.

He noticed the black Chevy Impala in front of their gate when he drove past the house. He drew up in his driveway, slid out of his car, and jogged up the steps of his terraced lawn, humming the last octaves of the song.

He pulled open the door. Strange, it was unlocked. “Sarah, I’m home.”

As he entered the living room, he was struck on his temple, hard. He struggled to retain his balance when someone blindsided him from behind and a fist slammed into his chin.

Shit, this couldn’t be happening. How did they find him? Zachary Cohen went down for the count for the second time in his life.

Zachary Cohen recovered from the blow and shook his head, then he heard his wife groan. He tried to prop his head up and felt blood trickle from his scalp. He shifted to an upright position and grimaced, touching his head.

Sarah was lying on the couch, naked. A man stood next to her, caressing her shoulder with his fingertips.

Zach stood on shaky legs then stumbled towards his wife. “What the hell do you want?”

The man grabbed Sarah around the waist with one arm and lifted her effortlessly, like she was a rag doll. He stood behind her, holding her body upright, then pulled a knife from a sheath on his belt and held it to Sarah’s throat. Her head slumped forward and she moaned, barely conscious. Her face was swollen and puffy, and her nose was bleeding.

“I need to know everything about how you found us—the mole, where did you get your information—everything,” he said, tracing the tip of the knife over Sarah’s breast. It left a thin, red line on her exposed flesh.

“Who are you?” Zach asked, trundling forward, unable to control the quiver in his voice.

The man shrugged then licked his bottom lip. “I have personal interests in this case. You were the bastard behind the sting. So I’m taking a shortcut, straight to the master brain.”

“Screw you!” Zachary screamed, pursing his lips to stop them from trembling. He swallowed hard and closed his eyes, breathing deeply. “Let her go,” he said, clenching his fists.

The man tsk-tsked, shaking his head. He had a toothpick in his mouth and rolled it from side to side when he spoke. “Be a nice little man, Zachary. I know where Rebecca is; grandmama has a cute place,” he said, resting his head on Sarah’s shoulder, fluttering his eyelids.

Zachary growled and charged. The man dropped Sarah and drove a fist straight into Zachary’s face. Zach stumbled and fell, moaning, holding his hands to his face.

Crouching on his hands and knees, Zachary tried to shake off the dizziness. He stood up but slumped back to the ground. He crawled towards Sarah, pulling himself forward by his hands on their newly-varnished mahogany floor. He slipped, hitting his chin on the ground.

He watched in stunned silence as the man sauntered to Sarah. Zach lifted a hand. “Please wait, I’ll tell you everything.”

The man knelt beside her, if examining her, tangled a fistful of hair in his hand, and glanced at Zachary. He lifted his eyebrows.

The man shrugged and lifted her head off the floor and slit her throat.

He turned to Zach and nodded, pleased with himself, then walked to the kitchen, whistling. The man opened and closed drawers and cupboards, searching for something.

Zach sobbed, slapping his palm onto the ground. “Oh God, no!” he screamed, sucking in shuddering breaths. “Please, God, don’t let this be happening.”

The man appeared from the kitchen, holding zip ties. He pushed his knee on Zachary’s back, pulled his arms behind him, then tied his hands. A cloth smelling of beeswax was stuffed into his mouth. The world spun around on its axis. The man picked him up with a soft grunt and hauled him over his shoulder. He was carried out of the front door, the man not bothering to shut it. A trunk popped and Zachary was dumped inside. He groaned and blacked out again.

A minute later Zachary smashed into the side of the trunk as the car jarred over a pothole or something in the road. He spat the rag from his mouth and struggled to remove a tiny transmitter from his jeans pocket. He pushed a button on the side of the device then took a deep breath and shouted, “Get Becky!”

The car swayed and bounced beneath him and he blacked out again.

Bruce Bryden examined the Glock then worked the cotton patch attached to the cleaning rod into the barrel. The gun lay disassembled in thirty-odd pieces, neatly in their order of reassembly. He nodded, satisfied every part was spotless. He stood and fumbled for the GLD when it vibrated in his breast pocket. He fished it out, a blue light flashing at the base of the unit.

He held a button on the transmitter and listened to the barely-audible message. He replayed the recording and listened closely. Zach’s voice was muffled, it sounded like he was driving. He strained to hear Zachary Cohen’s panicked words. “Get Becky.”

Blaze by Richard Bachman
Fool for Love: Fooling Around\Nobody's Fool\Fools Rush In by Vicki Lewis Thompson
Sharing Sunrise by Judy Griffith Gill
The Janson Command by Garrison, Paul
A Princess of the Chameln by Cherry Wilder
Dragon Day by Lisa Brackmann
The Kiss Test by Shannon McKelden
The Message by K.A. Applegate
Shorty Got My Head Gone by China White
Blonde Roots by Bernardine Evaristo