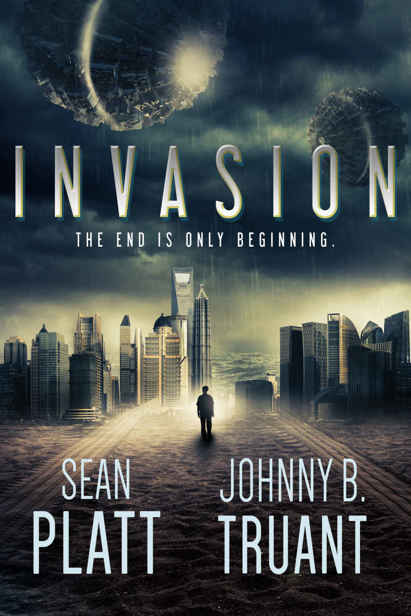 Get the Sequel FREE!

Copyright © 2015 by Sean Platt & Johnny B. Truant. All rights reserved.

Reproduction in whole or part of this publication without express written consent is strictly prohibited.

The authors greatly appreciate you taking the time to read our work. Please consider leaving a review wherever you bought the book, or telling your friends about it, to help us spread the word.

Thank you for supporting our work.

To our Platinum Readers. You make our lives awesome.

WANT TO GET THE SECOND BOOK IN THE INVASION SERIES FOR FREE?

If you liked Invasion, you’ll LOVE Contact, the second book in the Invasion series.

On the morning the ships came, Meyer Dempsey found himself preoccupied with drugs, sex, and business. It would have been hard to believe that just six days later, only one of the three would seem to matter anymore.

“You’re not listening to me, Heather,” he said into the phone. “I’m going to be in LA from Friday to Tuesday. I’ve already booked time with the studio on Monday. The whole reason I’m coming early is—”

Heather cut him off, probably to feed her need for a zinger more than a reply that couldn’t wait. Heather was always “on,” never really able to take a break and just be a person for once. It was one of the reasons they hadn’t been able to stay married. It was like living with a jester.

“Because you want to do the Walk of Fame?” she said. “Because you love weekends on Sunset?”

“What do you want me to do, Meyer? Telly makes my schedule. I do what he tells me. I’ve got a gig.”

“Boston?”
Meyer said the word as if he and Boston had an ongoing argument and everyone knew Boston was being an asshole about it. “Cancel it.”

“Cancel it?
This is my living we’re talking about.”

“You want to see me so bad, why don’t
you
postpone?”

“I can’t postpone. Lila has a thing. Trevor has … I don’t know … another thing.”

“Now I know why you got custody of the kids. You’re so on top of things.”

Meyer rolled his eyes at the empty penthouse. Heather’s dry, biting wit had made her career, and it’s what had attracted him to her in the first place. He still loved Heather plenty, but too often she seemed incapable of having an adult conversation.

“Do you want me to get the school calendar? I know what the ‘things’ are. Lila’s is a dance. Not prom. The other one.”

“Oh, ‘the other one.’ I remember my Other One. I wore pink chiffon. My date was Jimmy Breslin, and he could only get this powder-blue tux that smelled like cats had peed on it. Or were
still
peeing on it, like it had hidden compartments in the tux for urinating cats to do their thing. He was a total dork, but I gave him head afterward anyway, because, you know, everyone does that at their senior Other One. Because you only get one chance. Well … except for the other Other One.”

“I wouldn’t ask Lila or Trevor to miss anything,” Heather said, slightly more serious. “But Telly booked this months in … ”

“Telly works for
you
, Heather.”

“You’re right.
That’s
why I hired a manager and give him, like, half my income. Because I want to
not
do what he says and make my own schedule. What’s the big deal, Meyer? You’ll be back.”

Meyer had walked to the window and was looking out across Central Park. The weather was pleasant, and he considered going out onto the porch, but the wind looked rough. The roof terrace would be better, but not by much. That was the problem with tall buildings. You got a great view for an exorbitant price, but it’s like architects forgot how quickly the weather changed as you climbed higher in the air.

He took a beat before replying. He didn’t want to admit how much he’d been looking forward to seeing her. Besides, telling Heather about the ayahuasca ceremony he’d already booked with the shaman (and paid for in full) seemed like a jinx. You weren’t supposed to plan surprises for your ex-wife — even drug-related surprises. They both understood that, but the way Meyer sneaked around behind Piper’s back made both him and Heather feel guilty. Heather wanted badly to dislike Piper, and if she’d been able to, it might have made things easier for both of them. But unfortunately, Piper was impossible not to love.

“Just come out, and do your business with the studios, then go home. You don’t need to see me. You’re not flying commercial, are you?”

“So it’s not like you need to go those specific dates anyway, if you’re taking the Gulfstream. Just go out for Monday instead of the whole weekend. If you’d cleared this with me in advance, it’d be different, but I’m booked, sweetie. When we were getting started working together, would
you
have liked it if
I’d
just bailed on something to run off and screw my ex?”

But now he was just being juvenile. He sighed. He’d get over it. He’d lose the money he’d already paid to Juha, and he’d have to wait for the burst of mental expansion that always followed a ceremony … and yeah, that sucked. But what the hell — ayahuasca wasn’t the kind of thing you got addicted to. And he could certainly afford it. Not seeing Heather felt like the bigger hit. He hated to admit how much he missed her. Of course he loved Piper, but if there were such things as soul mates, Heather was his. Too bad she was so goddamned annoying.

“I can also meet you in Vail,” she said. “I have a thing in Denver in, like, two months. We can check on the construction of your new place and hang out.”

“If it’s not finished in two months, I’m going to hang myself.”

He rolled his eyes for no one to see. The project was already three months overdue, and if the crew dragged its feet much longer, they’d end up building his Axis Mundi (his significant place in the universe, as it were — as much as he usually hated woo-woo New-Age shit) in the snow. That would be annoying for the construction crew, he imagined, but it would be far more annoying for Meyer. He didn’t particularly want to navigate the backwoods roads on his two hundred acres of Colorado property in the snow. It was private land and wouldn’t be plowed unless he hired someone to do it.

But hey, if that happened, he supposed he’d make it work. It would be a pain in the ass, but he’d do it. Any way to ensure the project got finished. Something under his skin — something he couldn’t quite articulate, but that he always glimpsed in those ceremonies with the shaman — had begun to feel very pressing in recent months. He
needed
that place finished, and then he needed to hightail his family out there to make it their new primary residence. Because something was on the horizon. He felt surer of that as weeks became months. Every day without his Colorado house and the bunker beneath it was another day Meyer felt at loose ends, as if he’d misplaced his keys with no way to find them.

“Then I’ll meet you in Vail in two months, and we’ll hang out,” said Heather.

“I’ll want to take Piper and the kids when it’s finished.” Meyer hadn’t told any of them — Heather, Piper,
or
the kids — that he meant to take them permanently. But Heather could feel free to interpret him any way she wanted.

Meyer almost laughed, but she wasn’t kidding. The women had spent plenty of time together before, and he’d played the dutiful, faithful husband every time.

“Fine,” he said. But his tone must have betrayed his irritation at having to wait, because in a moment Heather was all over him, mocking mercilessly.

“It’s fine, Heather. I’ll just meet with the studio on Monday and save the extra days. I’ll—”

“You’re
disappointed,”
she repeated, laying it on thicker. The thing she was doing with her voice was a babyish effect — something she and her comedy audiences found hilarious but that had always made Meyer want to punch something. “You
miss
me, don’t you?”

“Maybe you’re doing me a favor,” he said, trying to put a positive spin on the situation and realizing he could easily find one. “I’ll save three days this way.”

And he really would. Ayahuasca wasn’t one-and-gone; if he expected to be in his right mind by Monday’s meeting, he and Heather would have had to meet the shaman on Friday (as booked) in order to have the weekend to ponder the universe and be generally obnoxious by the outside world’s standards. Heather would spend most of that time staring at the ceiling and talking about colors, and she’d humor Meyer when he got his great new ideas and made a few more connections in the cosmic puzzle he felt like he’d been assembling.

An Army at Dawn by Rick Atkinson
The Blake Legacy (The Blake Boys) by Laurel, Rhonda
A Wicked Game You Play by Leo Bulero
Alive in Alaska by T. A. Martin
Indigo Sky by Ingis, Gail
Growth by Jeff Jacobson
European Secrets (Paris - Vol. Two) by Vela, Ana
Coming of Age on Zoloft by Katherine Sharpe
Reckless Heart by Madeline Baker
The All-Day Fat-Burning Diet: The 5-Day Food-Cycling Formula That Resets Your Metabolism To Lose Up to 5 Pounds a Week by Yuri Elkaim