Read All Fall Down Online 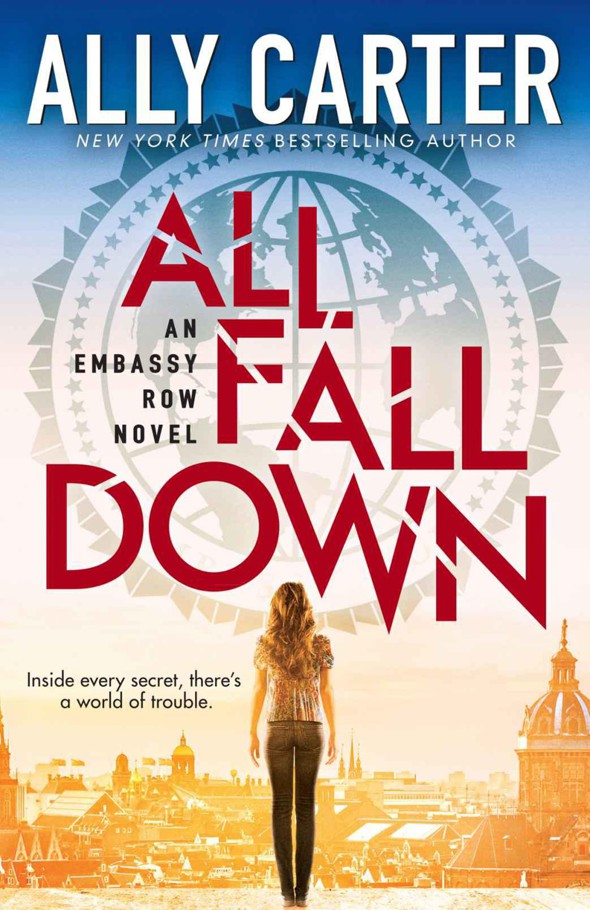 W
hen I was twelve I broke my leg jumping off the wall between Canada and Germany,” I say, but the woman across from me doesn’t even blink. I don’t ask whether or not she has ever heard the story. I’m pretty sure she probably has, but I keep talking anyway.

“My brother said that the fall would probably kill me. But it just broke my right femur in three places. I totally showed him.”

“I fractured my left forearm when I was ten, and dislocated my right shoulder five months later. Have you ever been to Fort Benning?” I ask, but I don’t really wait for an answer. “Well, you might think that big tree outside the Officer’s Club is climbable. Trust me — it isn’t. Okay. Where was I? Oh, fourteen was the year of the concussion. There were two of them. We were stationed in San Diego then. I didn’t break my ankle until we moved to Alabama.”

I take a deep breath. “And that brings me to now. Now I’m here.”

“And you’re not bleeding,” the woman says. “What an excellent start.”

“So in answer to your question, Mrs. Chancellor —”

“Sorry.
Ms
. Chancellor. I don’t mean to get into trouble. Trouble just sort of finds me.”

Behind her dark-rimmed glasses, I can see a glint in Ms. Chancellor’s brown eyes. Her mouth ticks up in something that isn’t quite a smirk but definitely isn’t a smile. I can tell she doesn’t believe me — but I also know that she would like to. Everyone wants me to be different than advertised. Grace: the new-and-improved edition.

What Ms. Chancellor can’t possibly realize is how nobody wants that more than me.

She could have tried to be nice about it. To be … you know …
diplomatic
. That is the purpose of this place, after all. But I guess diplomacy doesn’t always extend to teenage girls with my sort of reputation.

“Is that all?” Ms. Chancellor smiles a little. It’s almost like she’s daring me to top myself.

“Well, I did watch my mother die right in front of my eyes when I was thirteen. But you already knew about that, didn’t you,
Ms
. Chancellor?”

She recoils as I say this. People always do. To tell you the truth, that’s kind of why I do it. I mean, it’s not like avoiding the topic of the fire will bring my mother back. It won’t make me un-see what I saw. And, besides, I know Ms. Chancellor really wants to ask me about it — to see if I’m as crazy as advertised. This is her chance. If she’s crazy enough to take it.

Instead, she stands and starts toward the door.

“Well, Grace, why don’t I take you to your room?” she asks, but I can almost hear what she’s thinking — the undercurrent of questions and doubts. My life is a never-ending conversation of the things that people do not say.

Ms. Chancellor smiles. “I bet you’d like to get settled in.”

When I follow her out into the long hall, I can’t help but glance at the double doors of the neighboring office. They’re big and heavy — stately — with the US seal in the center and two flags flanking them. They look so official and so strong, but the most important thing about these doors is that they are tightly closed. Even to me.

I haven’t seen him in three years.

“I’ve been here before,” I say, following her toward the stairs.

“Of course, but
I’ve
never had the privilege of showing you around.”

“I lived here every summer until my mom died. I know the way around.”

“Of course you do, but you and I have never really gotten to know each other. I would like for us to be friends, Grace.” Ms. Chancellor stops on the highest step, her hand on the railing. The light from a big round window catches the highlights in her auburn hair. It’s pretty. She’s pretty. I bet she was a real looker in her twenties, but she’s only a few years younger than my grandfather, which makes her at least sixty now. Her auburn hair, I realize, probably comes out of a bottle.

“Chocolate?” She pulls two blue-wrapped sweets out of the pocket of her tailored jacket, offers one to me, and keeps one for herself.

“So I’m not a little kid. You don’t have to bribe me with candy.”

“Good. Then I get to eat yours.” She unwraps one piece and pops it into her mouth.

Every year the Swiss ambassador gives a huge box of chocolates to my grandfather for Christmas, and I know from experience that the candy Ms. Chancellor is offering me is smooth and sweet and unlike anything else on earth, so I take my piece and unwrap it, hold it in my hand for a second before taking a bite. A thin layer of chocolate covers my fingers when I’m finished.

“Here,” she says, handing me a handkerchief.

I rub my hands on my jeans.

Ms. Chancellor eyes this, sees it as proof that the ambassador’s granddaughter is just as wild and untamed as advertised.

I start down the stairs and summon my most regal tone as I glance back over my shoulder. “I feel we’re off to an
excellent
start.”

The embassy looks smaller than I remembered. I know buildings are supposed to shrink as you age, but I hadn’t been expecting this. When we reach the stairs, my hand feels too big on the railing. I wonder what Ms. Chancellor would do if I were to hop onto the banister and slide down to the black-and-white-checkered floor like I used to do when Jamie told me not to.

“There are fifty-five Americans employed by the embassy,” Ms. Chancellor says, slipping back into tour-guide mode as if I’m just another visiting dignitary. I can’t really blame her — I’m a big job, after all, a responsibility she isn’t exactly trained for.

“A few live on the embassy grounds. But most reside in the city. We are the face of the United States here in Adria. We do important work for an important cause. And now, Grace, you’re one of us!”

“I know,” I tell her, but she just talks on like it’s all news to me. Like I didn’t spend every summer of my life here up until three years ago.

“Some of the people who work here have children about your age,” Ms. Chancellor is saying. “I suspect you are going to make some great friends here, Grace.”

If Ms. Chancellor hears my sarcasm, she ignores it.

“We also have about forty Adrian citizens who work with us. Not for us. Never
for us
.” She adds the last part a little under her breath.

When we reach the end of the hall, I see a big round window with a cozy seat nestled into the alcove beneath it. Heavy velvet draperies hang on either side, ready to block the world away. Light ripples through the wavy glass, and I feel myself stop and stare.

In the distance, I can hear a woman counting.

There are footsteps on the stairs.

“Ready or not, here I come!” the woman yells, and the laughter grows louder.

“Gracie!” The woman’s voice echoes through the hall. “Gracie, where are you?”

“Grace?” The voice is louder — closer. It cuts through the fog that fills my mind. “Grace,” Ms. Chancellor says, and I shudder as I remember where I am.
When
I am.

She eyes me, not sure if she should be worried or annoyed. “What I was saying
after
that is that security is our top priority here. Adria is a very friendly post, but we live in a dangerous world. That’s why security protocols are not optional. We do not prop open doors. We do not give out access codes. And we never, ever jump off of walls.”

She removes her glasses and stares at me with eyes the same chestnut color as her hair, and I know she’s not messing around.

“While you are in this building, you are on American soil. This is your country. This is your home. But step outside these walls and you are a visitor in Adria — a visitor with a very important job. Grace, I need to know that you understand me.”

“I understand. Don’t worry. I am not going to cause any trouble.”

And at that moment I mean it. I really, really do. Ms. Chancellor must see it in my eyes, because she reaches out. But as soon as her fingers touch my shoulder, I feel a shock and jerk away. I’m almost certain I smell smoke.

“Grace?” Ms. Chancellor’s voice is too soft — too distant. “Grace, do you know why your grandfather asked you to come live with him?”

“Because my dad’s unit is being deployed to the Middle East and war zones aren’t as kid-friendly as they used to be?”

“No. You’re here because your grandfather has worked in Adria for nearly half a century. He married a woman from here. He raised his family here. This was your mother’s home, Grace. It is
your
home. And your grandfather wants you to know it and love it as he does. He has always wanted you here.”

“Okay.” I do not ask how — if Grandpa loves me so much — it’s possible that I haven’t laid eyes on him since before my mother died.

Ms. Chancellor smiles at me. She thinks we’ve just bonded. I don’t have the heart to tell her she’s wrong.

I’m here because there’s no place else for me to go.

The End of the World As I Know It (The Ghosts & Demons Series Book 2) by Chute, Robert Chazz, Pop, Holly
The Last Enchantments by Finch, Charles
Dreams of Perfection (Dreams Come True) by Heflin, Rebecca
Entreat Me by Grace Draven
The Tyranny of Ghosts: Legacy of Dhakaan - Book 3 by Don Bassingthwaite
El Sótano by David Zurdo y Ángel Gutiérrez Tápia
Holiday in Handcuffs by Yvette Hines
Bridge Too Far by Ryan, Cornelius
ROOK AND RAVEN: The Celtic Kingdom Trilogy Book One by Delcourt, Julie Harvey
Claimed by Her Demon by Lili Detlev