Read All For One [Nuworld 3] Online 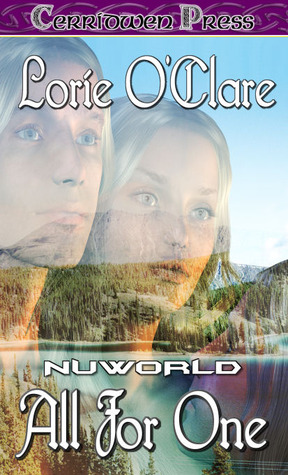 “We’re going to be missed if we don’t return soon.” Cali came up alongside her

“Go back if you want. I’ve never been this way before.” Ana veered her glider to the

right and accelerated. The vehicle, similar to a motorcycle, hovered ten feet above

ground before launching across the plateau.

Cali
groaned. She had a thin black wire wrapped around her ear that came down to

her mouth. Ana heard the groan through the similar device she wore, and couldn’t help

but giggle. The devices, known as comms, were linked so they could talk as they flew

across the countryside outside the town of Bryton.

“Cali, you’re too young to have lost the desire to explore. Come on.” Ana threw a

glance at the woman nine winters her senior. For as long as Ana could remember, Cali

had helped care for her. She and her twin brother, Andru, had spent more time with

Cali
over the winters than they had with their parents. There were no resentments,

however. Her parents ruled the largest nation in Nuworld. As winters passed, they’d

created a powerful nation, and Ana would rule one day. That was a thought she kept to

herself though—at least for the time being. Andru, her twin brother, was more than

excited to one day rule Gothman. But ruling the Runner clans took more work, and she

wouldn’t admit to anyone that she was a little apprehensive about it.

“We’re almost to the border.” Cali focused on the incredible range of snow-capped

mountains that crept closer as they flew across the countryside. “Ana, I must insist. We

can’t have you breaking your papa’s laws.”

“You’re such a spoilsport.” Ana felt confined, a sensation she hated. She wanted no

barriers, nothing to close her in. “Next time, I’m leaving you home.”

“You do and your papa will have your hide.”

“He is a royal pain in my ass,” Ana muttered. “Like you could protect me. More

than likely, if something were to happen out here, it would be me protecting you.”

Ana pulled her viewer out of her side pack and held it to her right eye. She adjusted

her vision as the round tube gave her a closer view of the forbidden mountain range.

Her glider slowed as she took in the huge rocks and packed snow.

“I know what you’re doing,” Cali said into Ana’s comm.

Ana turned to look at the older woman who rode alongside her. Her nanny wore

the traditional black face cloak. All Ana could see were Cali’s eyes. She stared

Cali
grunted. “I should have known you’d use the excuse of an idle drive across the

countryside to look for him again.”

to fly over her shoulder. She refused to wear the face cloak once out of range of the

Bryon house. Her parents insisted she maintain the Runner tradition and wear the

headgear even though she was only half Runner. Actually, she was a quarter Runner,

since Tara, her mama, was half Runner and half Gothman, although raised as a Runner.

Ana’s comm beeped in her ear. She hit the switch, grateful for the excuse to

continue toward the mountains while talking to whoever was calling.

Her brother’s voice brought a smile to her face. Until a few winters ago, the

servants had teased her by saying that if she cut her hair, there would be no way to tell

her and her brother apart.

“I’m east of Bryton—out on the plateau.” Ana increased her speed, not daring to

“Well, you better get home. Uncle Torgo just told me Papa is on his way home.

“Your headscarf is on your bed.”

Ana slowed her glider and turned. Cali followed suit, not questioning her sudden

“That’s fine, Fulga. Come in.” Tara leaned back in her chair, staring across the

conference table at the housekeeper, who stood in the doorway.

The view outside distracted her. Large windows overlooked the rugged hills to the

south. She and Darius had built the addition onto their home several winters ago,

allowing her more room to work, and the twins to have their own rooms upstairs.

“M’lady, a traveler from the north wishes to see you.” The hefty housekeeper

swished as she walked, stopping when she reached the middle of the room.

“Do I have an appointment?” Tara glanced at her landlink, which sat in front of her

“Tell the traveler that Lady Tara schedules her appointments in the morning. He

may see her tomorrow.” Jolee, Tara’s first assistant, had learned the sometimes

green eyes alert as usual. “And no, you don’t have an appointment this afternoon.”

“I know when her lady has her appointments, I do. My entire day is scheduled

around the lord and lady’s morning appointments, it is.” Fulga’s Gothman accent

Jolee opened her mouth to protest, but Fulga beat her to the punch and continued

“I told the traveler all that, I did. I told him he could transmit a message to Lady

Tara and she would respond quickly enough, she would.” Fulga crossed her arms,

pushing her ample bosom out in front of her. “He told me he’s traveled a great distance

and hasn’t the means to stay over, but instead has instruction to deliver a message.”

“Did he say where he’s from?” Tara raised her hand when Jolee would have

Fartha and Trev, Tara’s two other assistants, both looked up from their landlinks.

daresay I didn’t go about questioning him. Should I have?” Fulga looked uncertain and

glanced around the table.

“No. You did fine.” Tara grinned when the older housekeeper smiled triumphantly

at Jolee. “Jolee, go talk to the stranger. Find out what his business is. If he can’t afford

lodging, and needs to get back to wherever he came from, then maybe I should see

Jolee nodded, scooting her chair back. Tara’s comm beeped at the same time. She

grabbed the communication device and wrapped the curled end around her ear.

“Yes.” She adjusted the tiny wire to her mouth while dismissing Fulga with a wave

“Tara.” The masculine baritone purred into her ear. Warmth spread through Tara,

making her smile, while she looked across the table at Fartha and Trev. “What are you

“Just going over a few things with my assistants.” She had no desire to offer details.

Seventeen winters of being claimed hadn’t made it easier to discuss politics. Darius

sounded amiable, and she didn’t want lectures and advice on how to rule the Runners.

It was best to keep her answer vague.

“Our landlinks show a small camp to the northeast of us, just outside of Bryton. I

thought we’d return within the hour, but we’ll check this out first, we will.” He would

never ask her permission, but she had to admit, he’d come a long way in letting her

know what he was doing.

Tara
looked at Fartha. “Do you see a small camp just northeast of Bryton?”

Immediately Fartha began typing on the landlink in front of her. Trev did the same.

“Yes, I do,” Fartha said after seconds.

Trev punched keys on his keyboard. “They don’t appear to be moving.”

“They’re not too far from the Blood Circle Clan site,” Fartha added.

“Tara, I think you should see this man.” Jolee entered the conference room as Tara

took the comm off her ear.

“He says he’s a messenger sent from over the mountains. He’s from a race called

the Tree People.” Jolee moved to her chair, grabbing the back of it with her long thick

Minutes later, Tara reclined in her ornate wooden chair in the appointment room.

their people in this room.

The messenger entered slowly, glancing at Tara, and then at the empty chair next to

her. He pulled his hat from his head, and began twisting it in his hands.

Tara
kept her face expressionless, studying him while he studied her.

He was tall, with a wiry frame, light red hair curling around his gaunt face. Thin

straps of leather had been braided through several strands of his hair, giving it

somewhat of an unruly look. A full beard, several shades darker than the hair on his

head, covered half his face. His clothes hung loosely, a relaxed, comfortable look.

Although not an attractive man, he had the most intense green eyes she’d ever seen.

“Lady Tara, I’m honored that you would meet with me.” He bowed his head, and