Read All or Nothing Online 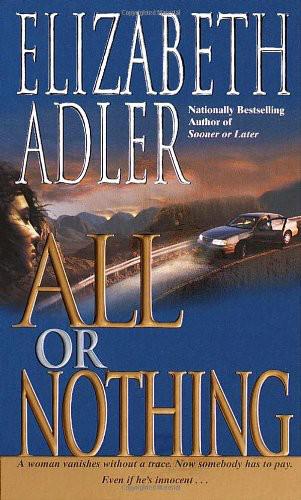 This novel is a work of fiction. Names, characters, places, and incidents either are the product of the author’s imagination or are used fictitiously. Any resemblance to actual persons, living or dead, events, or locales is entirely coincidental.

All rights reserved. No part of this book may be reproduced or transmitted in any form or by any means, electronic or mechanical, including photocopying, recording, or by any information storage and retrieval system, without the written permission of the Publisher, except where permitted by law.

Also by Elizabeth Adler:
LéONIE
PEACH
THE RICH SHALL INHERIT
THE PROPERTY OF A LADY
FORTUNE IS A WOMAN
LEGACY OF SECRETS
THE SECRET OF THE VILLA MIMOSA
NOW OR NEVER
SOONER OR LATER

Al Giraud, Private Investigator, was sitting in the bar of the Ritz–Carlton, Laguna Niguel, eating miniature pretzels and drinking a Samuel Adams dark ale, contemplating life and the fact that he couldn’t have a cigarette while waiting for the always late woman in his life.

It had been nine months since he had last smoked. Enough time to give birth to a pack of Camels, he thought, resignedly crunching down another pretzel. That was Marla for you. How come he’d let this woman have so much influence on his life? He glanced down at his old, faded jeans, short–sleeved plaid shirt, scuffed boots and the ancient snakeskin belt with the rearing mustang silver buckle, bought decades ago in his hometown of New Orleans. Then he grinned. At least she hadn’t yet managed to change his style.

Al had become a P.I. the hard way. The easier way would have been to become a criminal.

He was raised by his mother in one of the poorer parts of town, along with her five other boys. Somehow she managed to keep them out of trouble, though later he wondered how. It would have been easy for him to drift over to the other side into a criminal way of life. “The
easy
life,” his friends called it temptingly. He’d had a few scrapes with the law, hung in there, though, and finished high school, got a job immediately to help with the family’s finances. Then one of his brothers was killed in a drive–by shooting. Al’s sorrow and rage was such he wanted to go right out and kill the guy who’d done it, he wanted revenge so bad it hurt. His mom talked him out of it. “Two wrongs don’t make anything right, son,” she had told him through her tears. “Just get out there and try to do some good.”

The only way Al could figure out how to do good was either to become a minister or a cop. He was definitely more suited for the cop role. He was street–smart, athletic, ambitious and angry, with knee–jerk responses. He made his way up through the ranks to homicide detective, married, divorced.

The day came when Al had finally had enough of the cop’s life: the hours, the harshness, constantly seeing the seedy side with its tragedies and traumas. He took early retirement, packed his meager possessions in a small duffel bag, kissed his beloved mother good–bye, threw a raucous farewell party for his three remaining brothers and their wives and departed for L.A. “The land of opportunity.”

He had set himself up in a second–floor office on Sunset, with a glass door embossed with his name in gold and the words
PRIVATE INVESTIGATOR
––with
ALL WORK CONFIDENTIAL
in small print underneath. Purple bougainvillea trailed over the balcony, the busy traffic zoomed by on Sunset along with a constant parade of folk: smart businessmen, transients, hookers, record execs, dudes and gorgeous California girls. Enough to keep his mind off work, certainly.

He made contacts in the LAPD, in the District Attorney’s Office, in a couple of the legal firms, and work began to trickle his way. Divorces, fraud, embezzlement. Women who wanted to know what their husbands were up to. And men who wanted to know if they were being followed, and who was trying to kill them. Then he hit the big time with the case of a prominent man accused of attempting to murder his wife. Al was able to prove that the timing was impossible and the guy got off. Suddenly, he found himself in demand.

The work was risky, often dangerous, but he was from the streets, he’d mingled with guys like this since he was a kid. Until his brother’s murder he had called them his “friends.” Now he was definitely on the side of right.

Al worked hard for his clients. Some were guilty, some not: he just did his job and presented the evidence.

He lived alone in a small house in the Hollywood Hills––that is when he wasn’t
in situ
at her Wilshire Boulevard apartment with his lady love, Marla Cwitowitz––blond, thirties, stylish, sexy, good–looking and, although she looked like a movie actress, a professor of law at Pepperdine.

They had met at a grand Hollywood party given to celebrate the not guilty verdict in the trial of a prominent actor accused of strangling his ex–girlfriend. Al had traced the actor’s past as well as the girlfriend’s. Just to be sure. Dogged as Sherlock Holmes, he had visited their hometowns, gotten the scoop on them, found a stepfather accused of abusing the woman as a child. He had also found evidence that the stepfather was in L.A. the night of the killing––and witnesses who said that he was insanely jealous.

The defense took over from there and made mincemeat of the prosecution, casting full doubt on the stepfather. There was no way a jury could convict the actor with such testimony.

Al was by way of being the star of this party. For the occasion he wore a jacket along with his frayed jeans and plaid shirt, but he was uncomfortable in the marble halls of Hollywood filmdom.

He was standing by the window looking out at the floodlit fountains and elaborate terraced gardens, nursing his second good whiskey and wondering how soon he could leave when a velvety voice from behind him said, “Hello, Al Giraud.”

He turned and looked at one of the loveliest women he had ever seen.

“I’ve been waiting to be introduced, but no luck, so I’m introducing myself. Marla Cwitowitz. Professor of law at Pepperdine, ex–DA––and a great admirer of yours.”

She was wearing red. Short, strappy, low–cut and sexy––and if he wasn’t mistaken, expensive. Her golden–blond hair tipped her shoulder blades, flipping up gently as she put her head on one side, looking at him with laughing gray–green eyes. And her mouth was amazing, full with a cushiony underlip.

He realized he was staring. “Excuse me, you took me by surprise.” He held out his hand and she took it in both of hers.

“As you did me,” she murmured.

They had gotten along famously from that moment––when they weren’t fighting that is, and when she wasn’t bugging him about becoming his partner. The idea of Marla as a detective was laughable. No one would ever take her seriously. She was too gorgeous––
and
from the other side of the tracks. A wealthy family, top schools, clever. Definitely not from the streets. Except she had been a DA for a couple of years, and you didn’t do that in L.A. without seeing life at its rawest. Still, Al wanted to keep her away from all that.

“What the hell d’ya see in me? An uneducated bum, an ex–cop, a two–bit P.I.? A lovely woman like you?” he had asked her, the first time he made love to her.

Marla sighed, looking thoughtfully at him. Al Giraud’s face was all angles and planes: razor–sharp cheekbones, beetling black brows over deep–set piercing blue eyes, a pugnacious jaw. He looked like a cartoon detective. Put a fedora on him and a necktie––he was Dick Tracy. In the plaid shirt and jeans, he should be propping up a cheap bar. In a suit, he could be running for office.

A chameleon of a man, Marla had thought, interested in the dichotomy. “Excitement,” she whispered, kissing his ear. “You’re different. At the opposite extreme of what I do. My realm is clinical. Yours is hands–on. I like that contrast and I want to help you.”

“Help me?” He was astonished.

“You know, to solve cases. I think I would be quite good at it.”

He’d stared suspiciously at her. “Marla, you want a job, there are easier ways than sleeping with a guy.”

At that moment, as far as he was concerned, Marla could have had any job she wanted.

In the Ritz bar at Laguna Niguel, Al looked with the keen eye of an ex–cop at the guy at the table opposite, reading the sports page of the L.A.
Times
and sipping a Bloody Mary. He envied him the celery stalk; his stomach was growling already and he was fed up with the pretzels. Why did Marla always have to be late? They had planned an early dinner.

The guy glanced toward the entrance, then at his watch, then went back to reading the newspaper. Obviously he too was waiting for someone.

Al bet it was a woman. Who else would be this late? Taking a gulp of the Samuel Adams, he noted the conservative gray business suit, good white shirt, understated blue silk tie. The shoes were well polished, crisp brown hair neatly combed, face recently shaven. A nice–looking fella, waiting for whom? He wore a wedding band. But he didn’t look like a man waiting for his wife . . . he wasn’t pissed–off enough. It had to be a girlfriend.

Passing the time, Al laid bets on what she would look like. Tall, dark, sexy? A petite California blonde, body–buffed and casual? A long–legged redhead? An Asian beauty?
He had just settled on the Asian beauty when he spotted Marla heading toward him. Every head in the bar turned as she walked past and he heaved a sigh of pleasure.

Marla too could be any woman she wanted. “A mistress of disguise,” Giraud called her, with that sardonic grin that sometimes made her want to punch him.

From her immigrant parents, Marla had inherited the broad Slavic bones that cast elegant shadows on her cheeks, and the heavy blond hair that grew smoothly back from a widow’s peak. Part Grace Kelly, part Madonna, she was a role–player
par excellence:
the prim law professor in a dark suit––skirt not too short, gold necklace, modest–heel pumps. The California girl in Lycra and sneakers, working out. The society dame, elegant in a beaded lace gown; the party girl in the briefest Versace. And in the bedroom––she was anyone she chose to be. The only role Marla couldn’t play was that of a nondescript person. No matter how she dressed down in sweats and sneakers, hair pulled back, no makeup, there was still something about Marla that turned heads.

“It’s the way you walk,” Al told her resignedly. “Somehow, you can never get that twitch out of your tail. Also, you can’t resist flirting.”

It was true and Marla knew it. Flirting was a way of life, her favorite pastime, something she couldn’t resist. It lightened her serious day, made her smile.

Al went to buss her cheek, but Marla was having none of it. She clasped her arms around his neck and brought her mouth up to his in a lingering kiss.

“Hi, darling,” she said, still only an inch from his lips. Her greenish–gray eyes were smiling and she had the look of a mischievous cat playing a game.

“You know how I hate a public spectacle.” He removed himself from her arms, waiting politely while she took a seat.