Read All Over but the Shoutin' Online

All Over but the Shoutin' 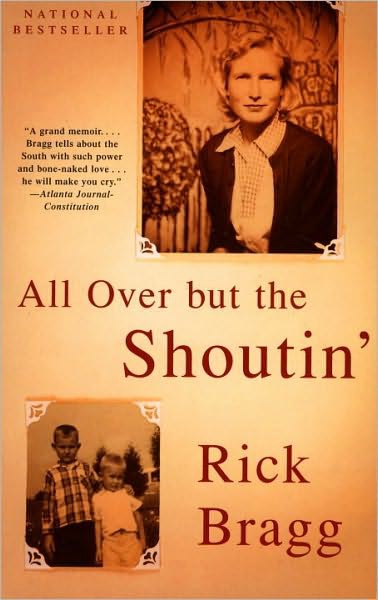 Rick Bragg
ALL
OVER BUT
THE SHOUTIN’

Rick Bragg is the author of
Somebody Told Me, All Over but the Shoutin
’ and
Ava’s Man.
A national correspondent for
The New York Times
, he was awarded the Pulitzer Prize for feature writing in 1996. He lives in New Orleans. 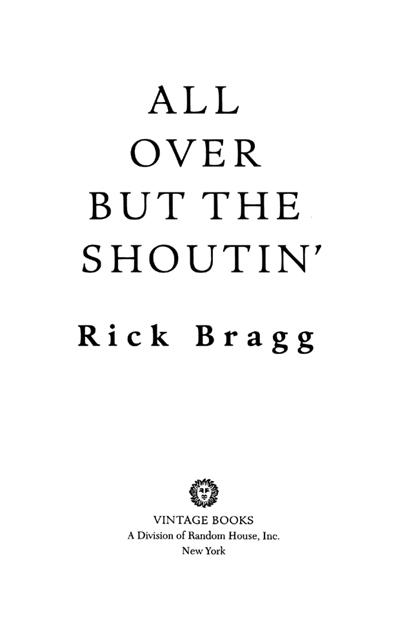 T
O MY MOMMA
AND MY BROTHERS

1  A man who buys books because they’re pretty

2  A killing, and a man who tried to walk on water

3  Fake gold, other people’s houses, and the finest man I never knew

8  In the mouth of the machine

9  On the wings of a great speckled bird

10  If you got to kill somebody, better it ain’t family

12  Getting above your raising

2 LIES TO MY MOTHER

19  The price tag on heaven

28  The interview for the Ivy League

32  Dining out with no money, and living with no life

3 GETTING EVEN WITH LIFE

Living on the road my friend

Was gonna keep you free and clean

And your breath is hard as kerosene

You weren’t your momma’s only boy

But her favorite one, it seems

She began to cry when you said goodbye

Saddled to your dreams

I
used to stand amazed and watch the redbirds fight. They would flash and flutter like scraps of burning rags through a sky unbelievably blue, swirling, soaring, plummeting. On the ground they were a blur of feathers, stabbing for each other’s eyes. I have seen grown men stop what they were doing, stop pulling corn or lift their head out from under the hood of a broken-down car, to watch it. Once, when I was little, I watched one of the birds attack its own reflection in the side mirror of a truck. It hurled its body again and again against that unyielding image, until it pecked a crack in the glass, until the whole mirror was smeared with blood. It was as if the bird hated what it saw there, and discovered too late that all it was seeing was itself. I asked an old man who worked for my uncle Ed, a snuff-dipping man named Charlie Bivens, why he reckoned that bird did that. He told me it was just its nature.

T
his is not an important book. It is only the story of a strong woman, a tortured man and three sons who lived hemmed in by thin cotton and ragged history in northeastern Alabama, in a time when blacks and whites found reason to hate each other and a whole lot of people could not stand themselves. Anyone could tell it, anyone with a daddy who let his finer nature slip away from him during an icebound war in Korea, who allowed the devil inside him to come grinnin’ out every time a sip of whiskey trickled in, who finally just abandoned his young wife and sons to the pity of their kin and to the well-meaning neighbors who came bearing boxes of throwaway clothes.

Anyone could tell it, anyone who had a momma who went eighteen years without a new dress so that her sons could have school clothes, who picked cotton in other people’s fields and ironed other people’s clothes and cleaned the mess in other people’s houses, so that her children didn’t have to live on welfare alone, so that one of them could climb up her backbone and escape the poverty and hopelessness that ringed them, free and clean.

Anyone could tell it, and that’s the shame of it. A lot of women stood with babies on their hips in line for commodity cheese and peanut butter. A lot of men were damaged deep inside by the killing and dying of wars, then tried to heal themselves with a snake oil elixir of sour mash and self-loathing. A lot of families just came to pieces in that time and place and condition, like paper lace in a summer rain. You can walk the main street in any small town, in any big one, and you will hear this story being told behind cigarette-scarred bars, before altars, over fresh-dug ground in a thousand cemeteries. You hear it from the sixty-five-year-old woman with the blank eyes who wipes the tables at the Waffle House, and by the used-up men with Winstons dangling from their lips who absently, rhythmically swing their swingblades at the tall weeds out behind the city jail.